The Glamour Cosmetics founder and her husband hosted a simple yet ultra-romantic soirée with nods to their Armenian culture. 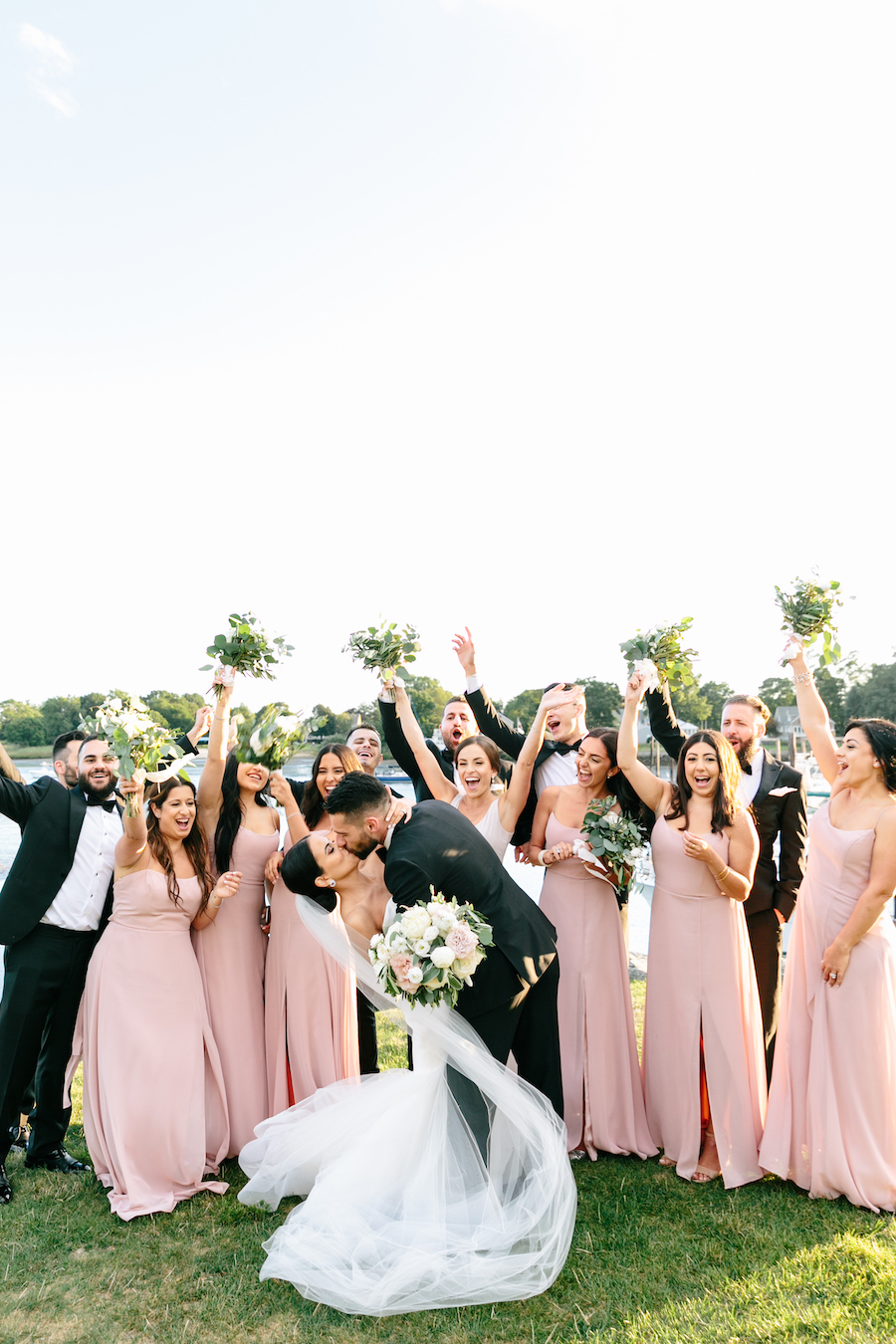 Garineh Ashjian and Hrag Thomasian met long before their eventual walk down the aisle. Although they grew up in different cities, Garineh in Boston and Hrag in Philadelphia, they became friends at age 14 through their local Armenian youth organizations, which hosted joint events on the East Coast. As they got older, their friendship only grew deeper. “I remember having late night talks with him. He knew more about my life than some of my closest girlfriends,” says Garineh, the founder of Boston-based Glamour Cosmetics. “I just trusted him tremendously.”

While the two “went their separate ways romantically,” the bridal-and-editorial makeup artist explains, they always remained friends. That all changed though in 2011, when they were both finally single and decided to go on a cruise with friends. On the trip, things turned romantic. One night when the group was out dancing, Hrag even kneeled down and pretended to propose to Garineh. She was embarrassed, but Hrag’s joke turned out not to be so laughable after all. “We knew that if we started this relationship, it was going to be forever because we were so close already and our relationship was based on friendship and trust,” Garineh says. And shortly after they returned from the cruise, Hrag made plans to visit Garineh in Boston for two weeks. “Then he kind of just stayed here,” she recalls.

In 2016, the couple and their family took a trip to Armenia with Garineh’s father’s Watertown dance company, Sayat Nova. Hrag was carrying an engagement ring with him the entire time; while he felt ready to pop the question, he didn’t know when the right moment would come. Finally, on the last day of the trip, the group was visiting one of the country’s oldest monasteries when the couple decided to climb down some rocks beside a river. Hrag asked Garineh’s sister to take photos of them there, but when Hrag began to kneel down, Garineh didn’t realize what was happening and stopped him. “I said, ‘No, all of our pictures are of us sitting down, let’s stand up,'” she remembers. “So he just stood up and gave me the ring. He actually said, ‘Do I really need to ask?'” Garineh said he didn’t.

When Garineh and Hrag first started envisioning their celebration, they planned to tie the knot in Armenia. They soon realized, though, that having their wedding so far away wouldn’t be easy for them or their guests. So they instead decided to get married near home, where they could still incorporate elements of their culture such as gold pomegranate favors (a symbol of abundance) and plenty of Armenian music. For their venue, they chose Danversport, a recently renovated yacht club and event space with a ballroom that matched the couple’s simple, all-white aesthetic. Another plus: The venue could accommodate their 215 invitees, all of whom Garineh says never left the dance floor that night. “We literally walked out dancing,” she recalls. “The wedding and the energy was everything we could have dreamed of. I was just overflowing with love.” That love extended to the couple’s vendors, Garineh’s industry peers, too. “Not only were they genuinely the best of the best, but they were also my closest friends,” she says. “I felt so loved being surrounded by people I know support me as a person and as a business, who were there to make my dreams come true.” 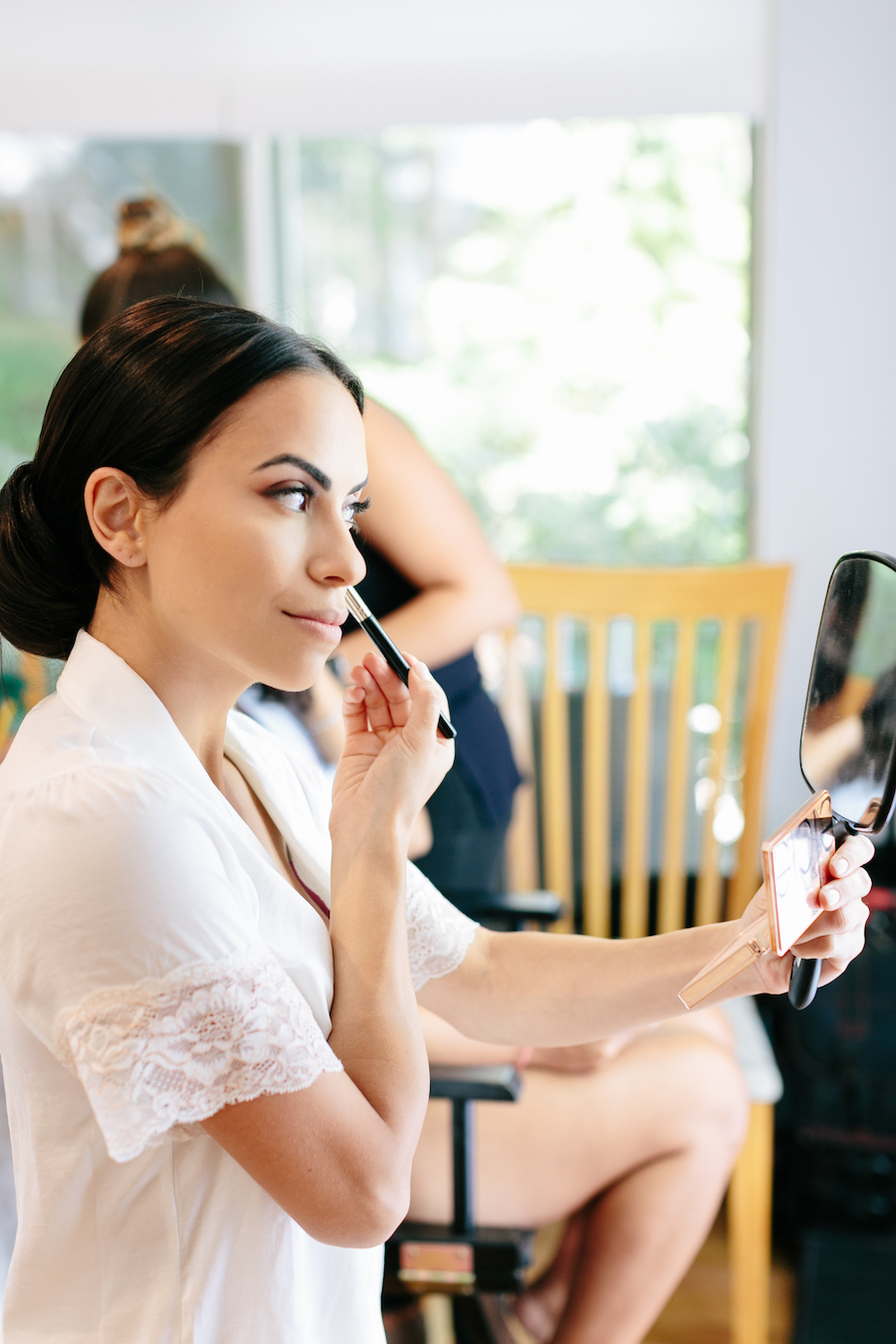 Garineh opted to do her own makeup for her wedding day. “I wanted to do it on my own because I feel like I know myself best, and I had a vision of what I wanted it to look like,” the bride says. “It was also just really special for me to do.” 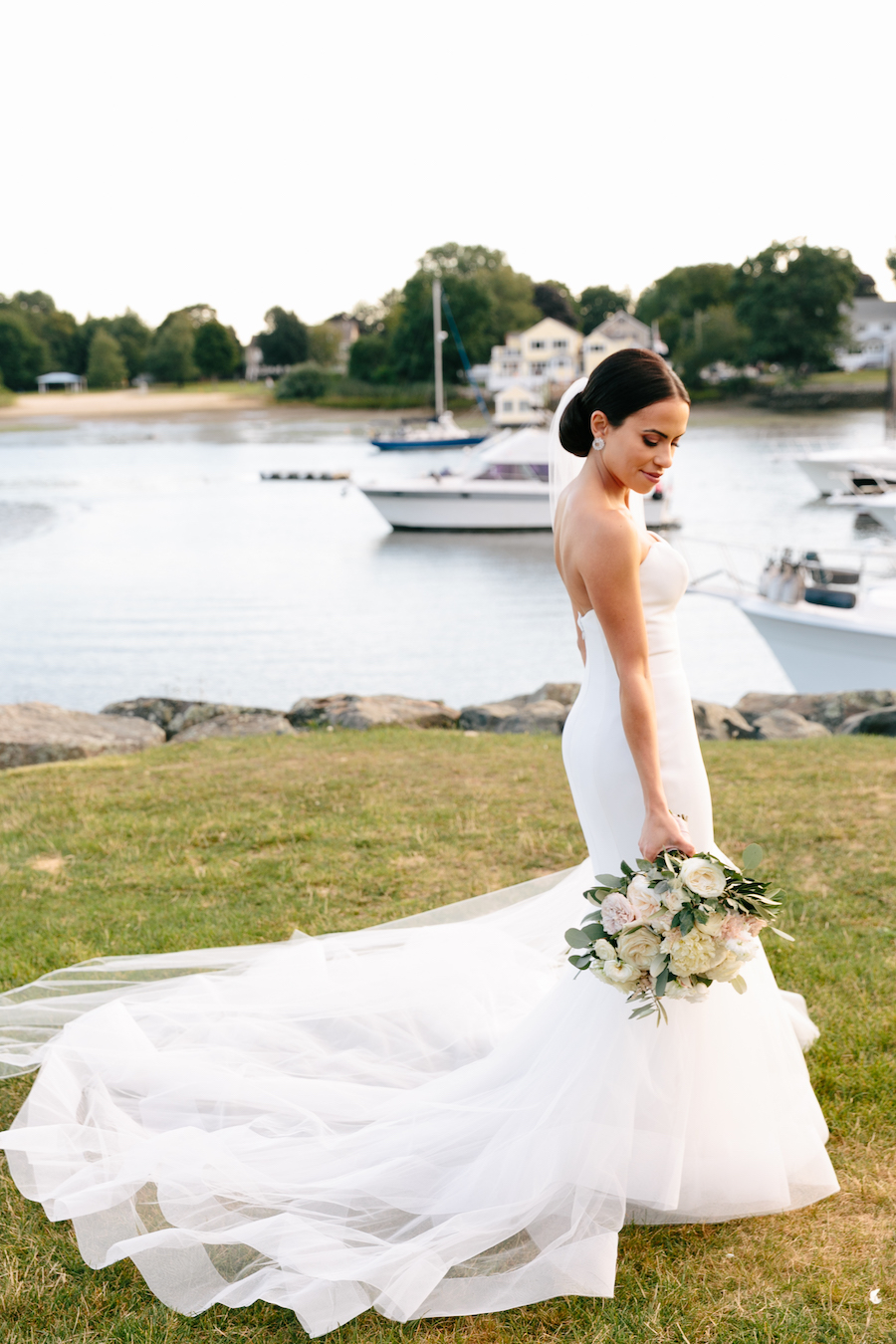 The bride, who describes herself as petite and indecisive, tried on many gowns before she found the perfect frock at a trunk show at Vows in Watertown. “I caught myself smiling every time I put on the dress, so that was how I knew [it] was the one,” she says. “It was simple but very sophisticated and timeless.” 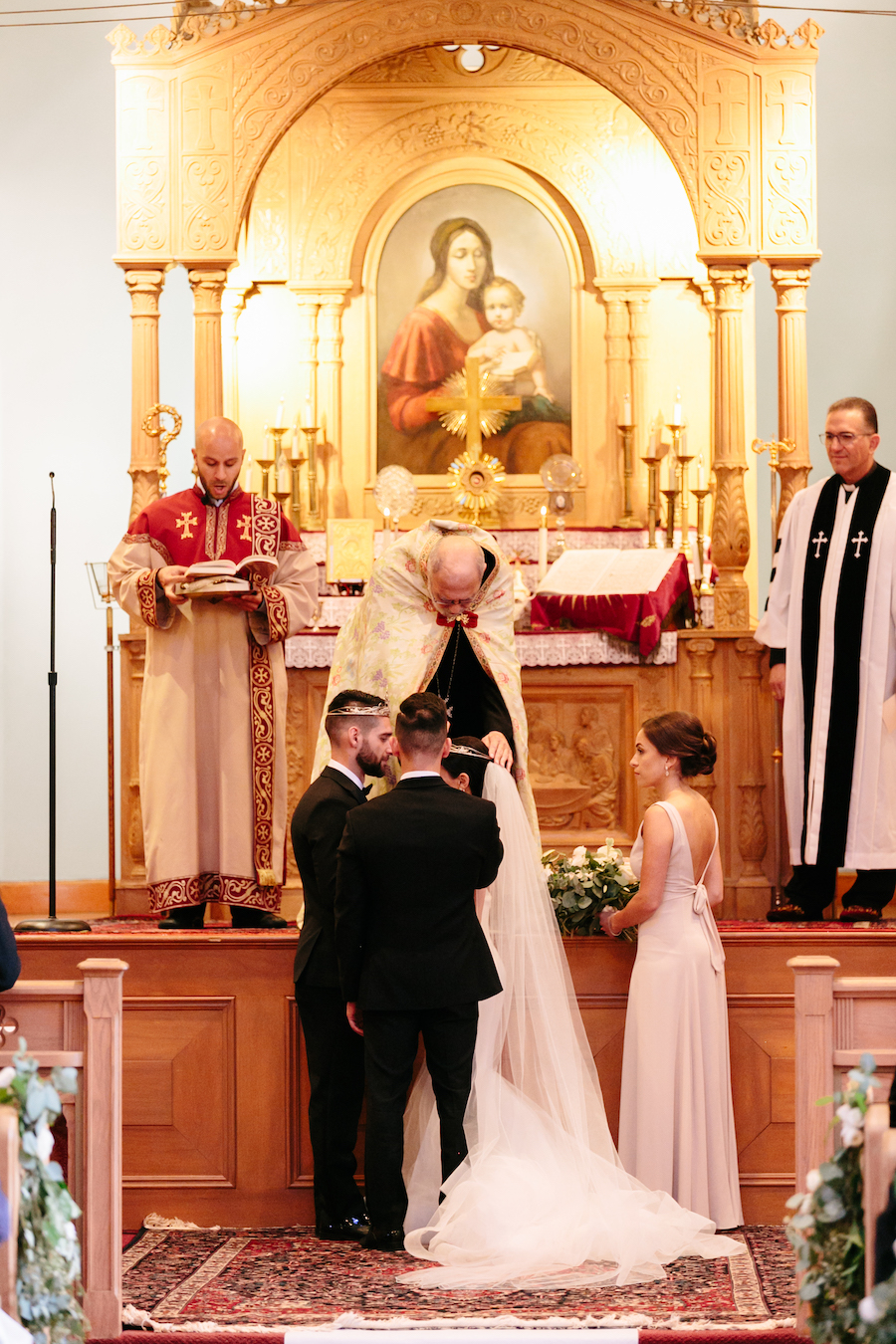 The bride and groom tied the knot at St. Stephen’s Armenian Apostolic Church in a traditional Armenian ceremony, during which the priest placed a crown upon their heads to symbolize their anointment as king and queen of their household. 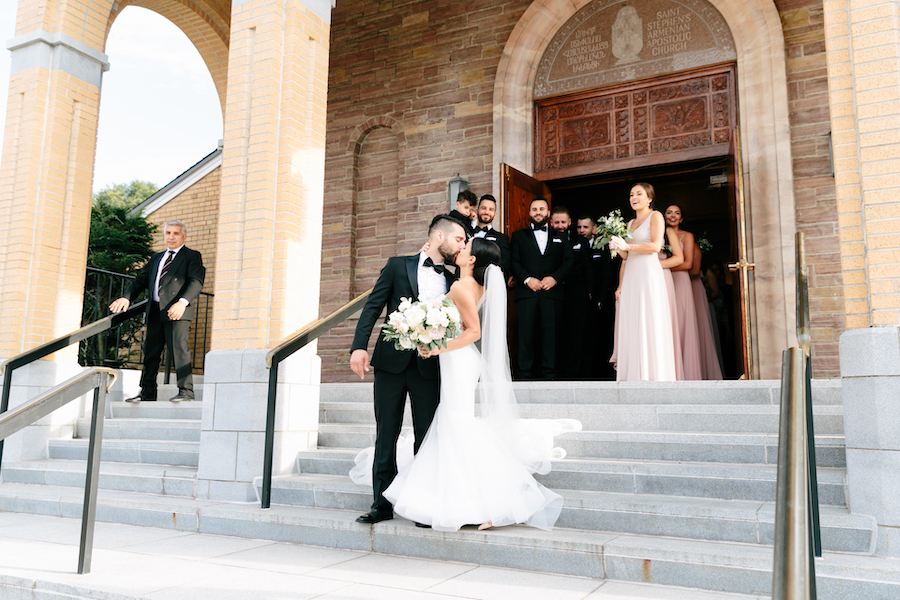 Garineh and Hrag had their first kiss as husband and wife on the steps outside of the church, where they exited to dhol drumming performed by the bride’s brother. 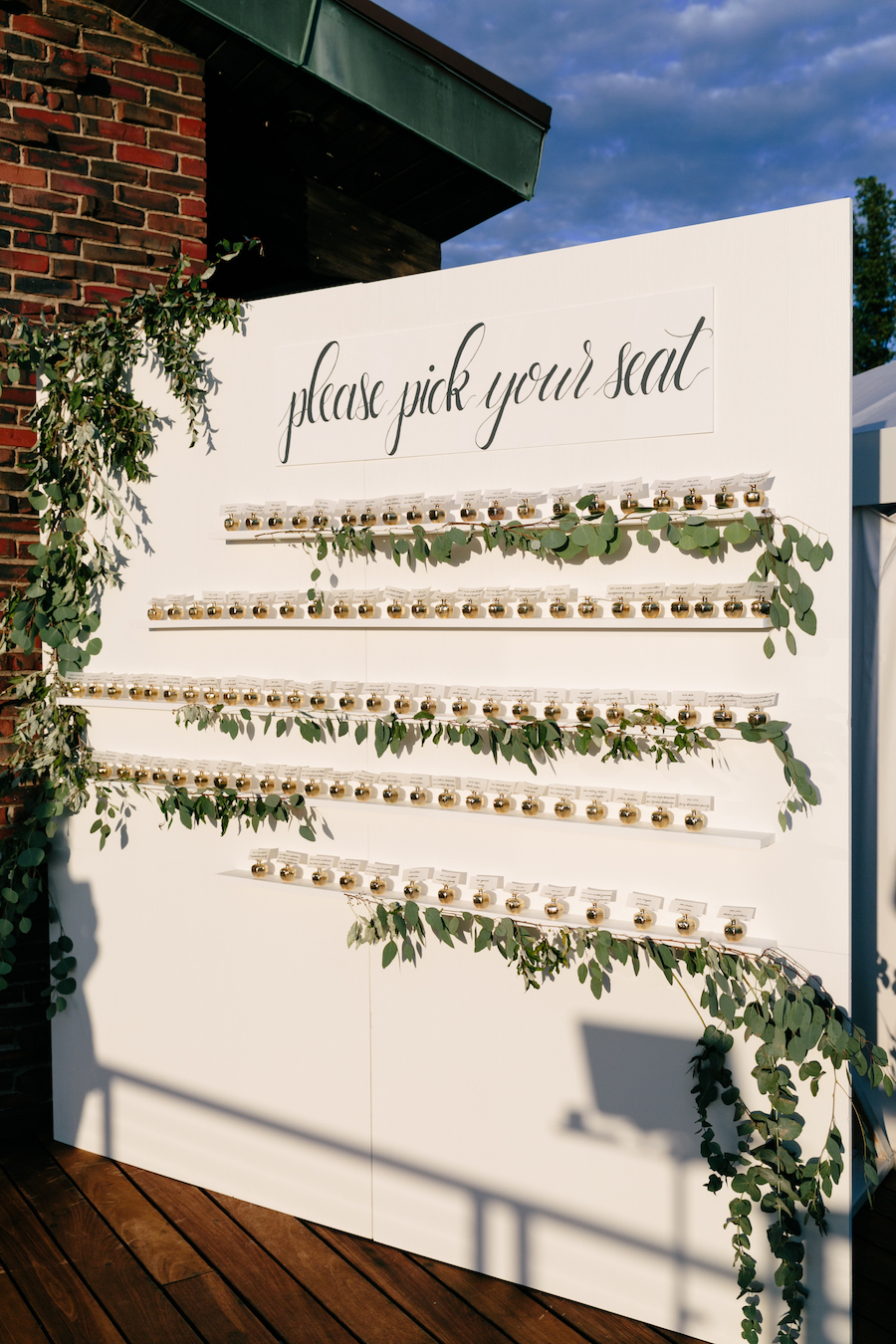 The pair attached their guests’ escort cards to golden pomegranate-shaped figurines that opened to reveal a Jordan almond, a symbol of sweetness at Armenian weddings. 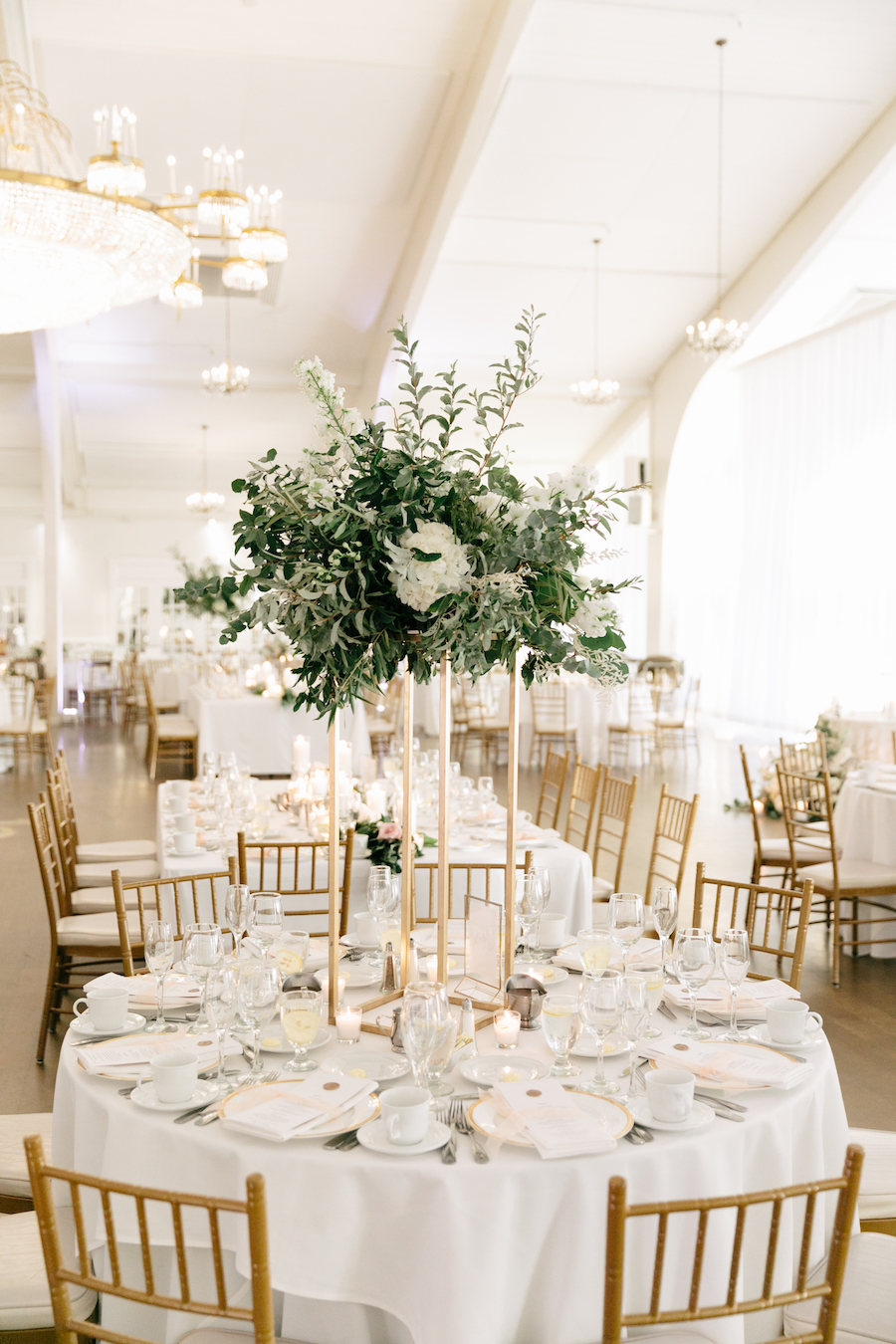 Garineh wanted the floral arrangements in the ballroom to be clean and romantic but “with some flair.” Apotheca brought the bride’s vision to life via garlands dotted with white and blush-toned flowers on the long tables, and tall arrangements with plentiful greenery on the rounds. “I wanted [the décor] to be visually interesting,” Garineh says. “When you walked in the room there was so much to look at, but it all tied together beautifully.” 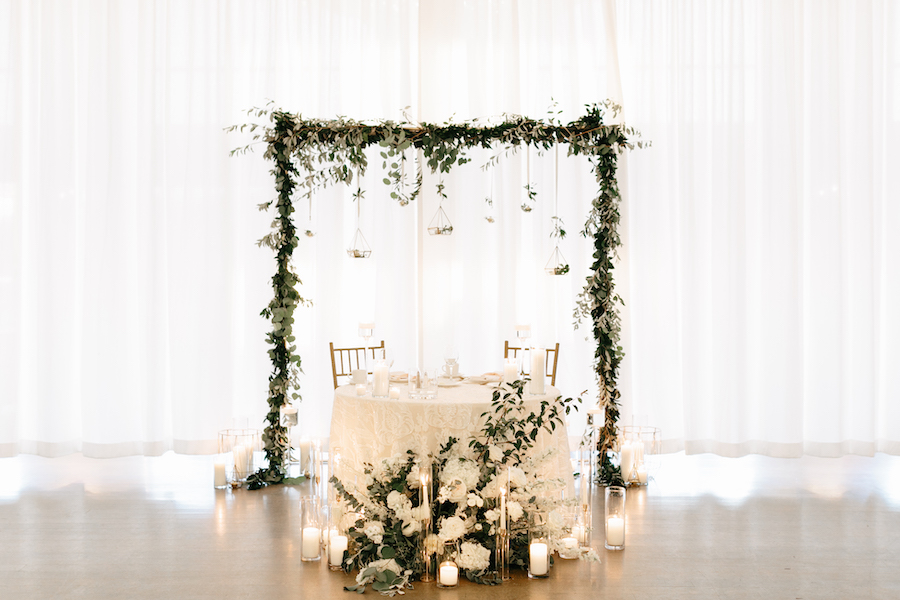 Planner Rachel Lynn came up with the idea to position an arch featuring greenery and hanging terrariums (filled with the same golden pomegranates that served as escort-card holders) above the couple’s sweetheart table. “When I walked in and saw that for the first time, I had tears in my eyes,” the bride says. “All I could do was turn around and hug [Rachel].” 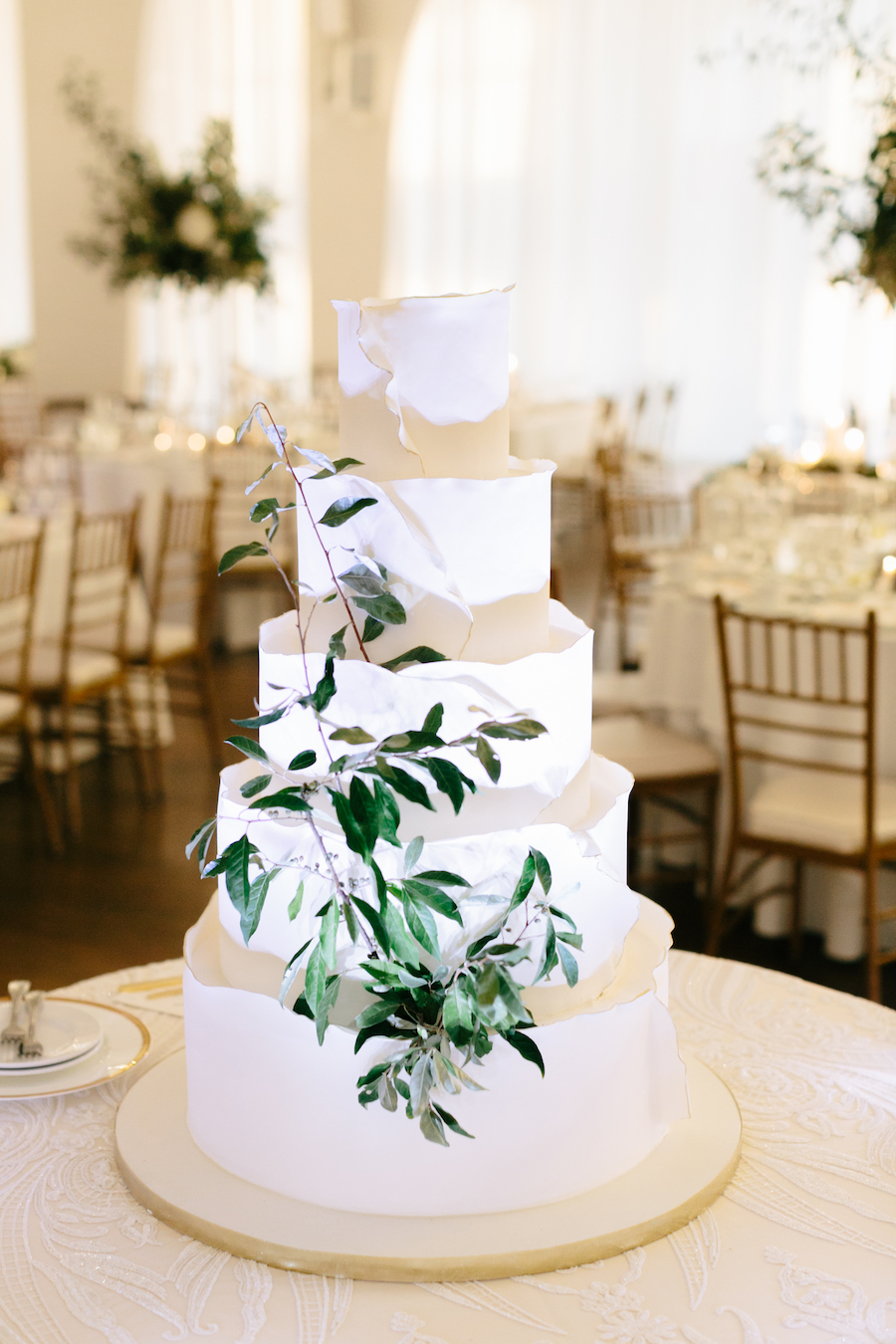 Montilio’s Baking Company wrapped each of the five tiers of Garineh and Hrag’s Italian olive-oil wedding cake with fondant to create petal-like shapes. 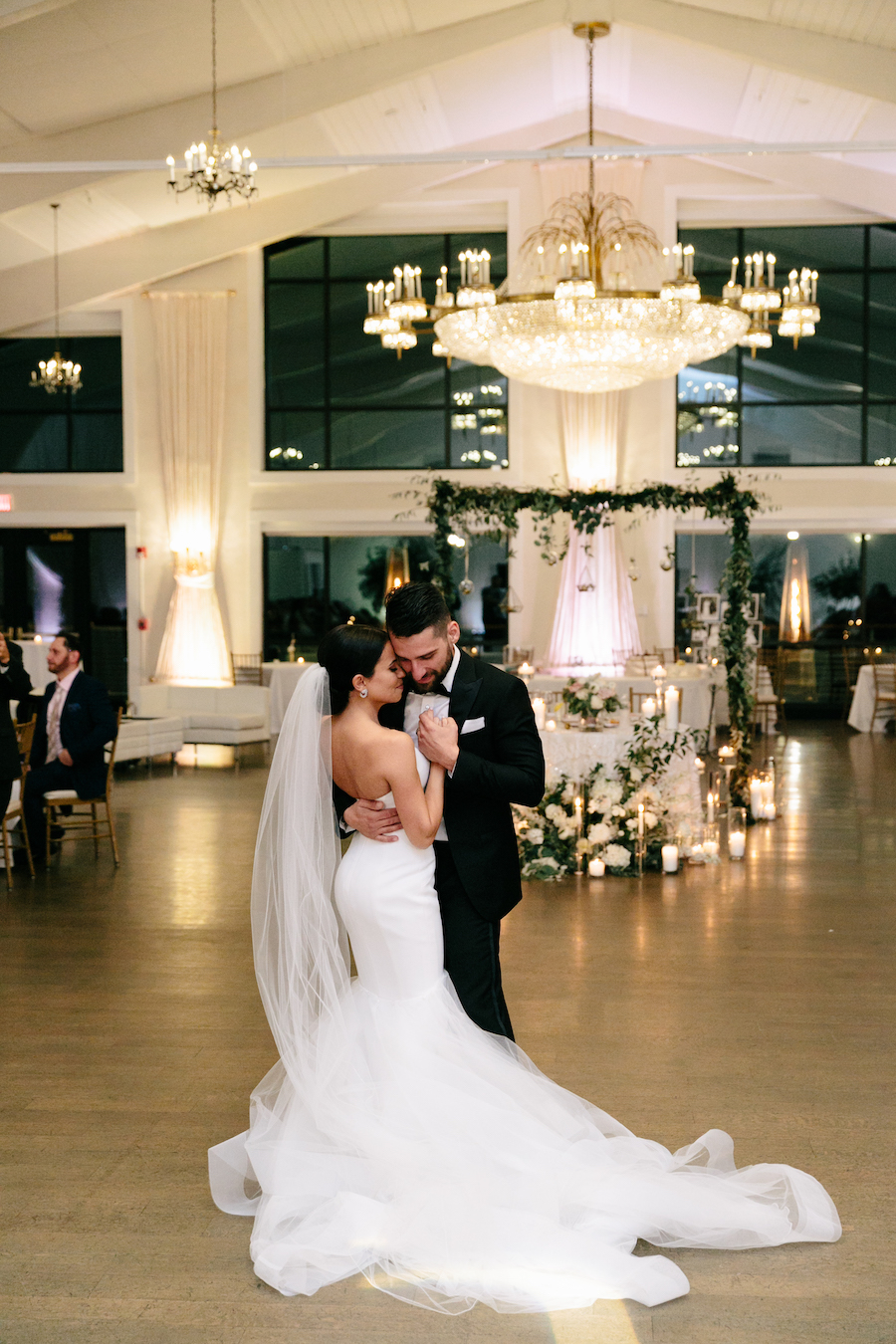 Hrag came up with the idea to have the couple’s first dance to “I Don’t Want to Miss a Thing” by Aerosmith, and sent the song to Garineh to play while she was driving. “He had texted me the song and of course I know it, but when I listened to it I envisioned our first dance and started bawling my eyes out in the car by myself.” When the two danced to it at their wedding, saxophonist Joe Sparkes accompanied part of the original recording.