Peek Inside the First-Ever Wedding at the Encore

The October affair was just as grand as you'd expect. 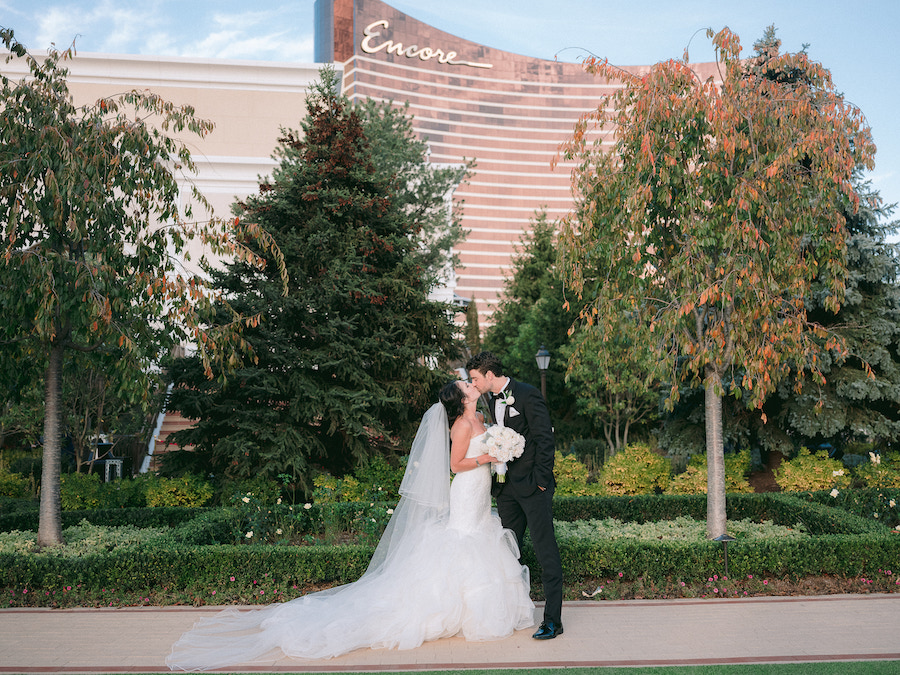 Caitlin Ellis and Brendan Costin were both hockey players in the same friend group at UMass Amherst when they first met in 2011. At the time, there was nothing romantic about their relationship. “He was really attractive, but we always were bantering back and forth, and he thought I was annoying,” Caitlin recalls with a laugh. “I never thought it would go anywhere.” After their graduation in 2012, Caitlin had to stick around campus for a bit longer to finish an internship, so Brendan, whose summer job didn’t start for a few more weeks, offered to stay and keep her company after the rest of their friends had left. It was during that time that their friendship turned into something more. “We’ve been together ever since,” Caitlin says.

About a year later, the two were living together in Everett, where Caitlin grew up. Then, after another year passed, they became parents to a golden retriever pup named Oshie. “As soon as I saw how he was with Oshie, I just knew he was going to be such a great husband and father in the future,” Caitlin says. By the time they’d been dating for five years, Caitlin says she was more than ready for Brendan to pop the question. Finally, one day in December 2017, she had a feeling the proposal was coming her way. Caitlin had expected Brendan to suggest something romantic to do for the day, but instead, he said they should take Oshie for a walk with his cousin and sister. So when they headed to Breakheart Reservation in Saugus, Caitlin admits she was “a little pouty.” He wasn’t going to propose after all, she thought. Then, while they were out on the trails, Brendan’s sister volunteered to take a photo of the couple and Oshie. Caitlin was just about to give the dog a treat when suddenly Brendan got down on one knee. “I was shocked,” she recalls. “It had just started snowing and it was beautiful. Then Oshie jumped up on us. It was just awesome.”

Brendan and Caitlin knew from the beginning that they would hold their ceremony at Saint Francis de Sales Parish in Charlestown, the church attended by the bride’s family. Then, to make things easier for their guests, they hoped to host their reception as close to the church as possible. Caitlin had been keeping up with news surrounding the Encore for years, and thought the casino, which was being built just over a mile away from the church, might be the perfect place. So, in spring 2018, she reached out to the Encore to see if it would possible to celebrate their wedding there the following year. The answer was yes. “I couldn’t believe it when we heard back and started the planning process,” the bride says. At the time, only a few stories of the casino had been constructed and nothing on the inside was finished, so when the couple put down their deposit, they’d only toured the construction site and seen renderings of the venue. Despite the uncertainty, the bride says she had “a feeling that everything would work out.” After months of anticipation, Brendan and Caitlin at last got the chance to tour the completed casino just before it opened in June 2019. And when their wedding day arrived a few months later, it went as smoothly as the bride had expected. “It the most fun I’ve ever had in my entire life,” she says. “There was so much love in the room and we couldn’t have asked for a better day.” 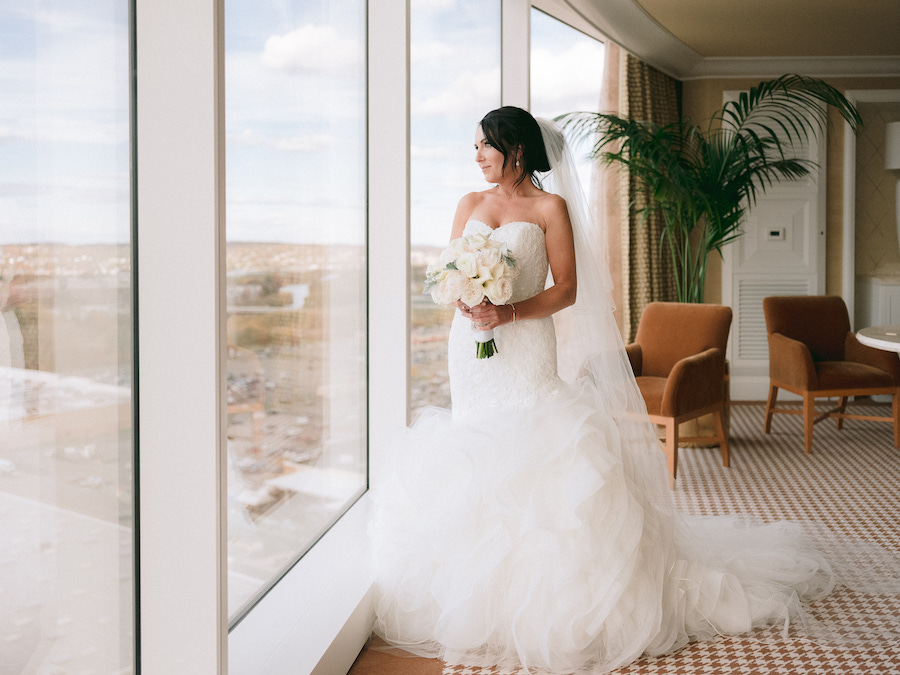 For a clean and simple look, Caitlin opted for champagne-hued arrangements for the wedding day. The Encore’s in-house floral team filled her bouquet with white roses, ranunculus, peonies, and calla lilies. 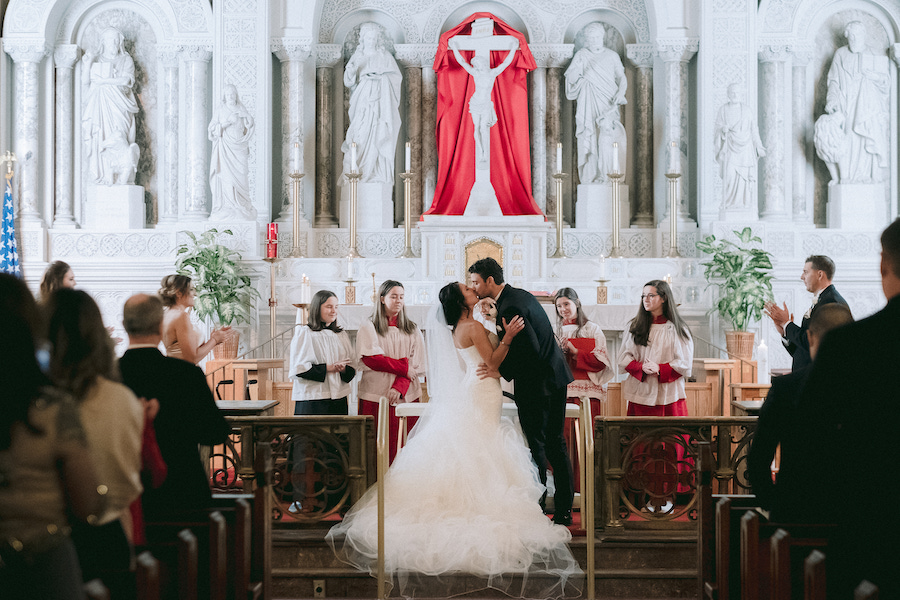 The bride and groom exchanged vows at Saint Francis de Sales Parish in Charlestown, where Caitlin was baptized. “I’ve been going there since I was a baby, and Brendan is also from a Catholic family, so it meant a lot to his grandmother, too, that we both wanted to have [the ceremony] in a church,” she says. 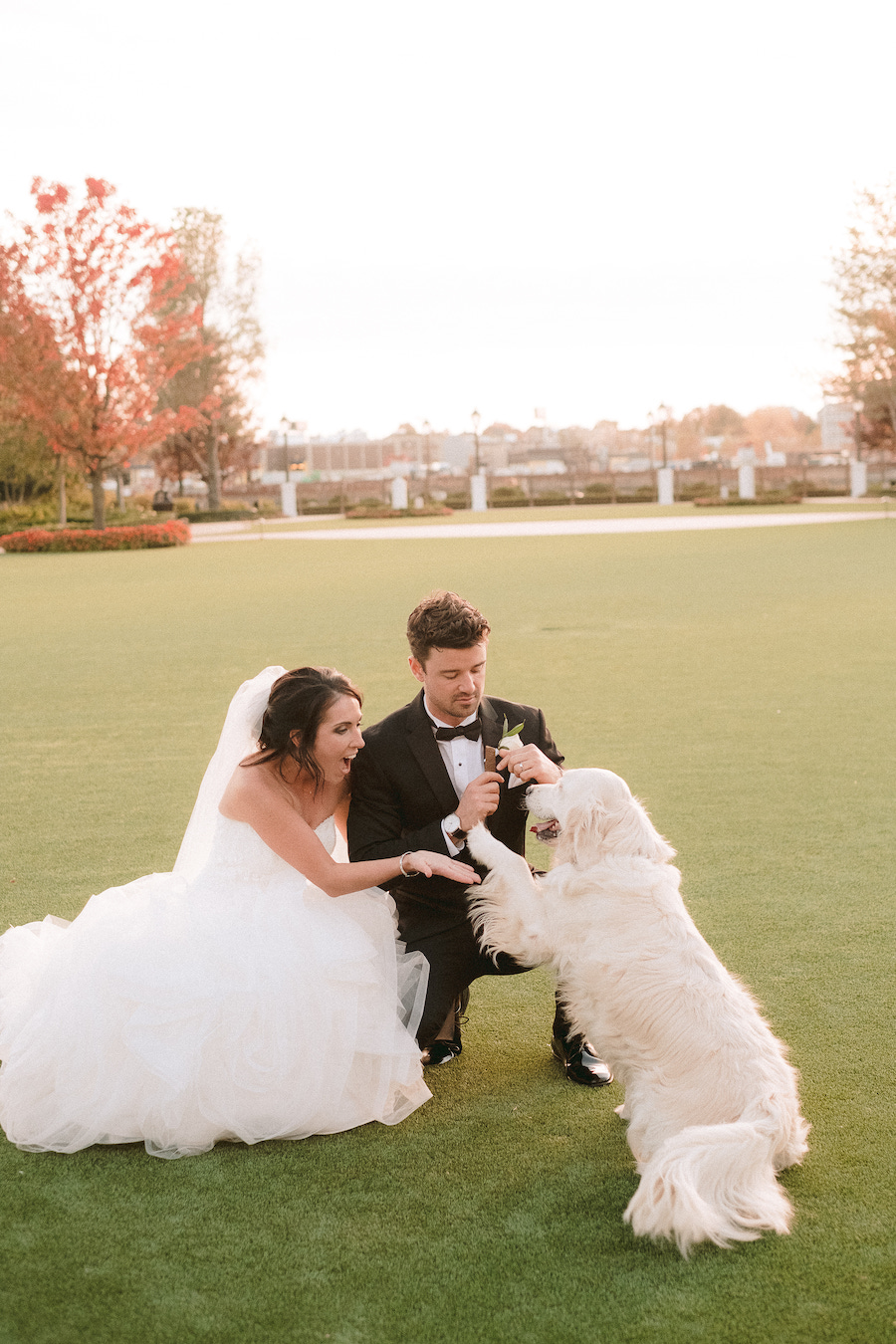 The pair knew they wanted to take photos with their golden retriever, Oshie, on their wedding day, so their dog walker brought him to the casino for photos after the ceremony. “He’s so well-behaved and he’s really like our baby,” Caitlin says. “He was so excited because he saw all of our family and friends, too.” 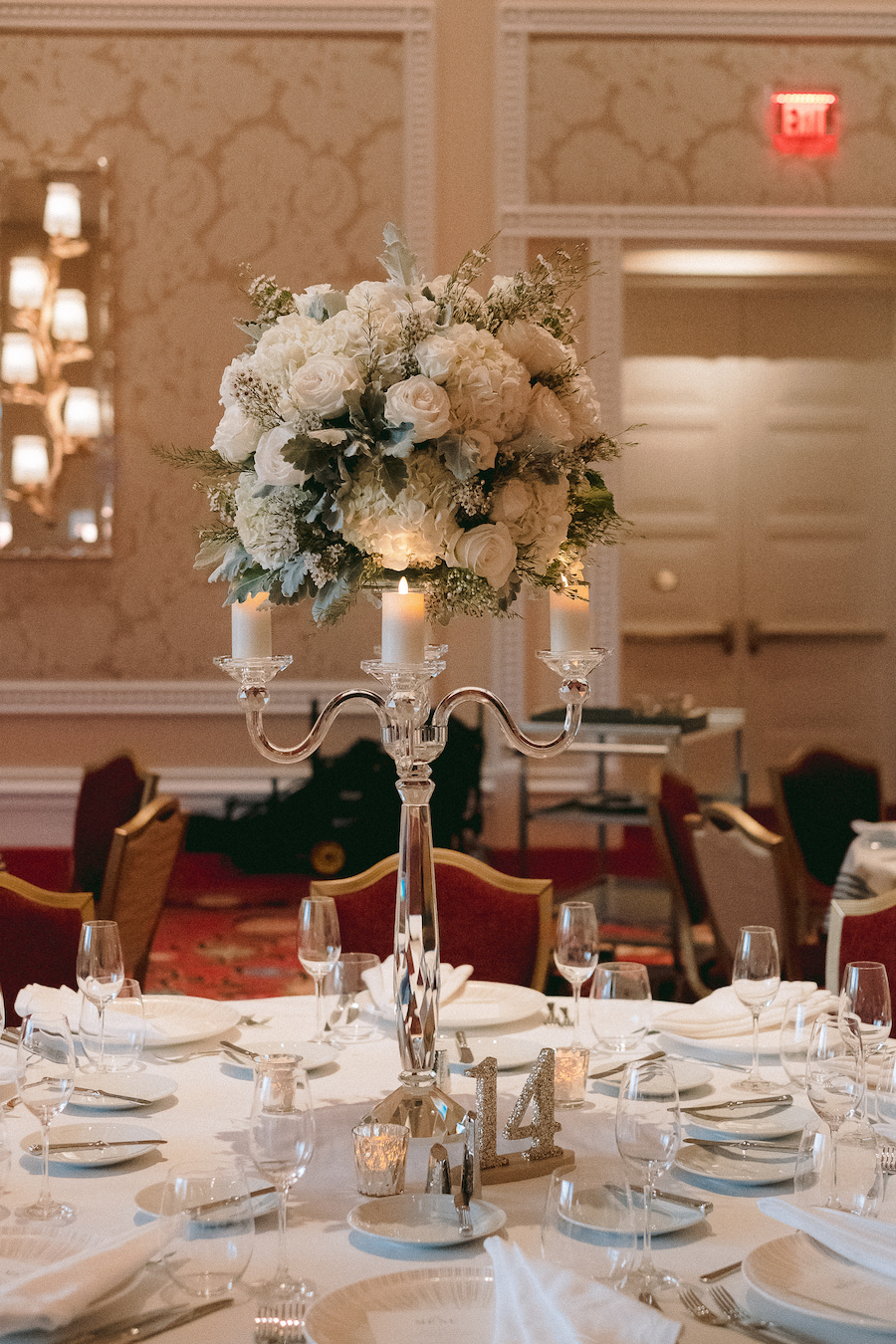 The tables in the Picasso Ballroom, where the two held their reception, featured low arrangements of white roses, hydrangeas, and greenery, as well as taller arrangements perched atop clear candelabras. “I was completely shocked when I saw it all set up on the day of,” Caitlin says. 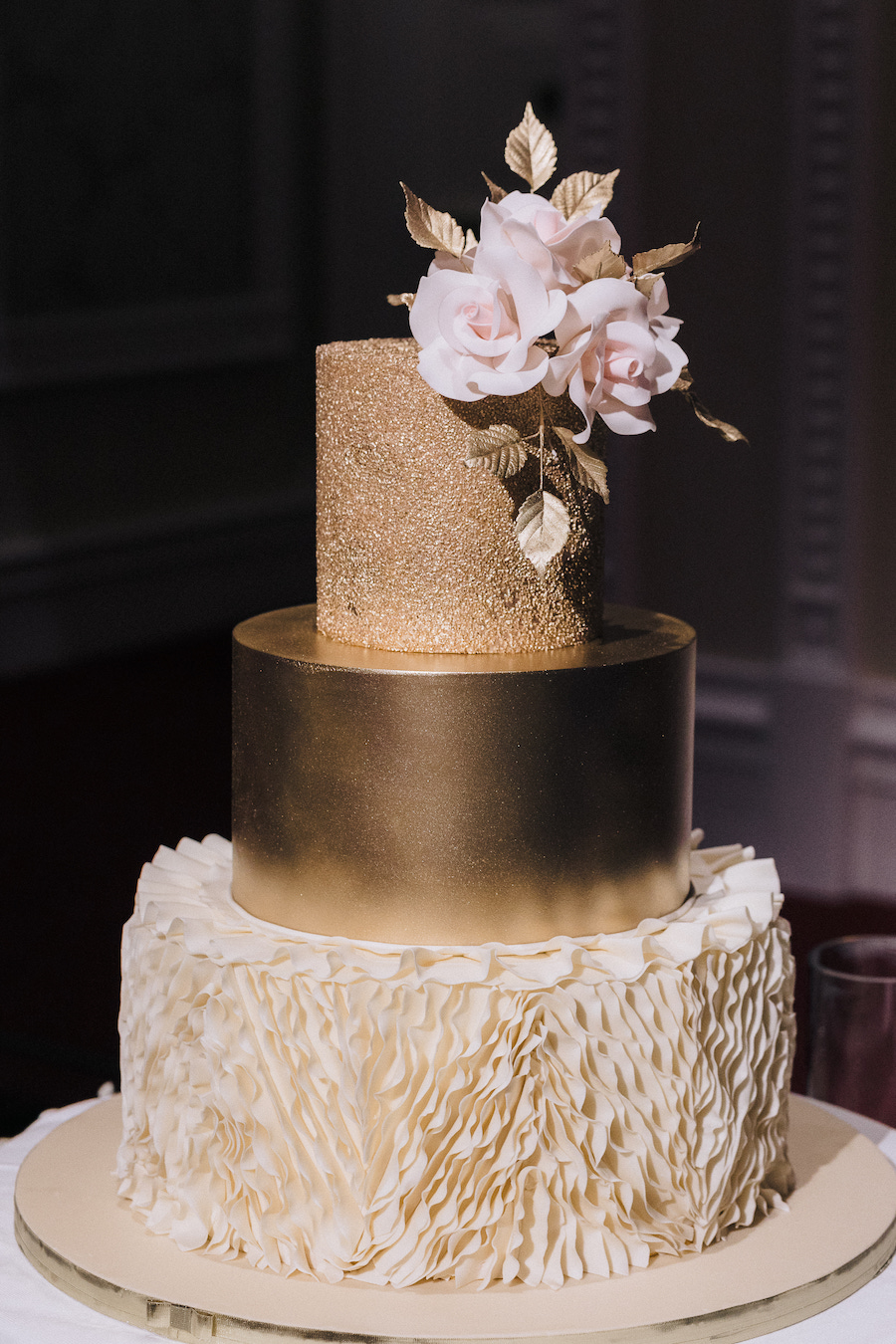 Caitlin and Brendan served a cake featuring both chocolate mousse and vanilla sponge tiers, baked by the casino’s catering team. “It was the best cake I’ve ever tasted in my life and it reminded me a lot of my dress because it was sleek at the top and had the ruffles at the bottom,” the bride says. 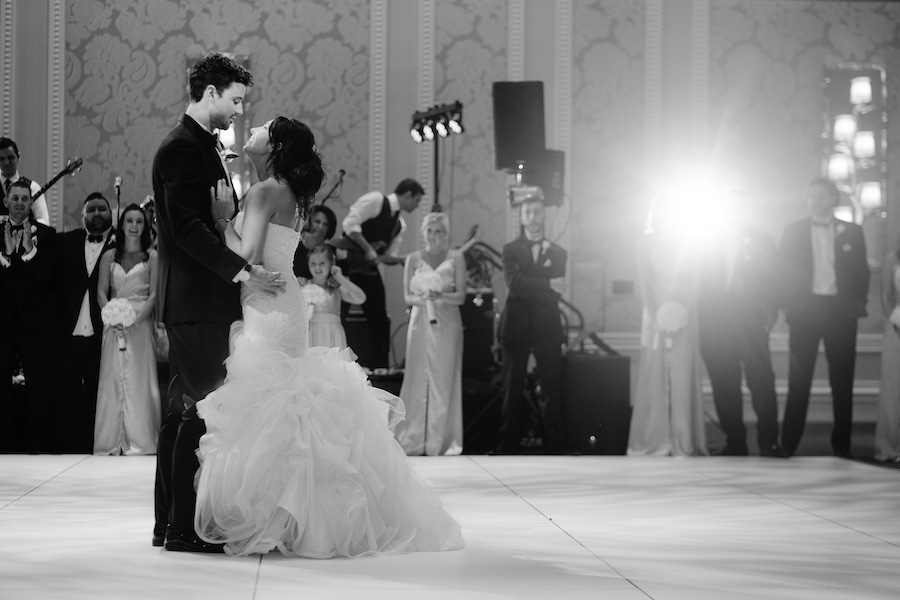 The bride and groom had their first dance to “Beautiful Crazy” by Luke Combs, a song they were introduced to by Brendan’s brother the week before he unexpectedly passed away in May. “We kept thinking about that last day we had with him, and we said, ‘There’s a reason why he fell in love with that song and we fell in love with it, too,'” Caitlin says. “We wanted to make him part of that day, and it really was the perfect song.” 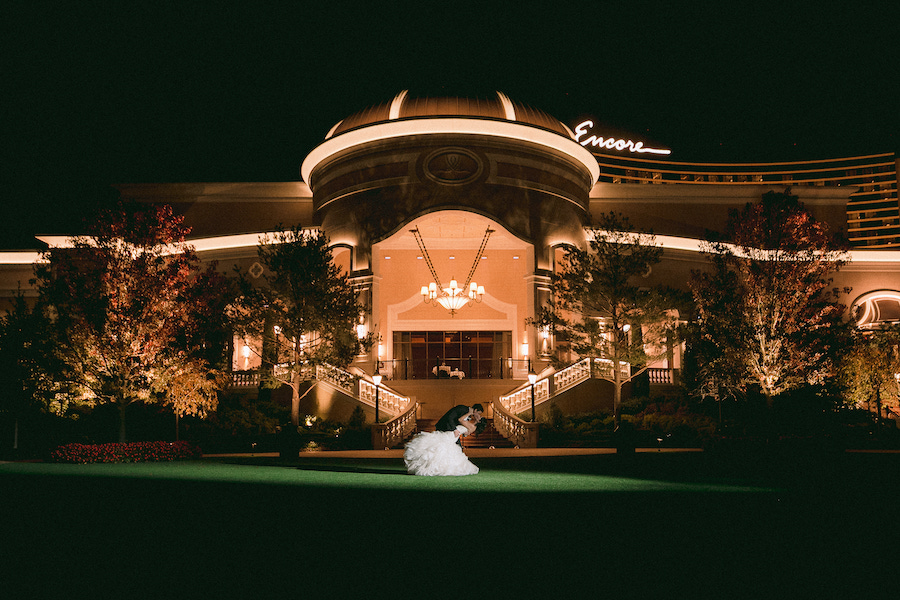 After their reception and afterparty, Caitlin and Brendan stayed in a two-bedroom suite at the casino’s luxury hotel until 5 p.m. the following day, and then jetted off on their honeymoon. “Now that we’re back to reality, we just want to do it all again,” the bride says. “Everything was perfect.”

28 Black Wedding Vendors to Hire for Your Big Day