This Pair Planned an Intimate Seaside Wedding at Hammond Castle

The medieval-inspired 1920s castle is modeled after the Isabella Stewart Gardner Museum. 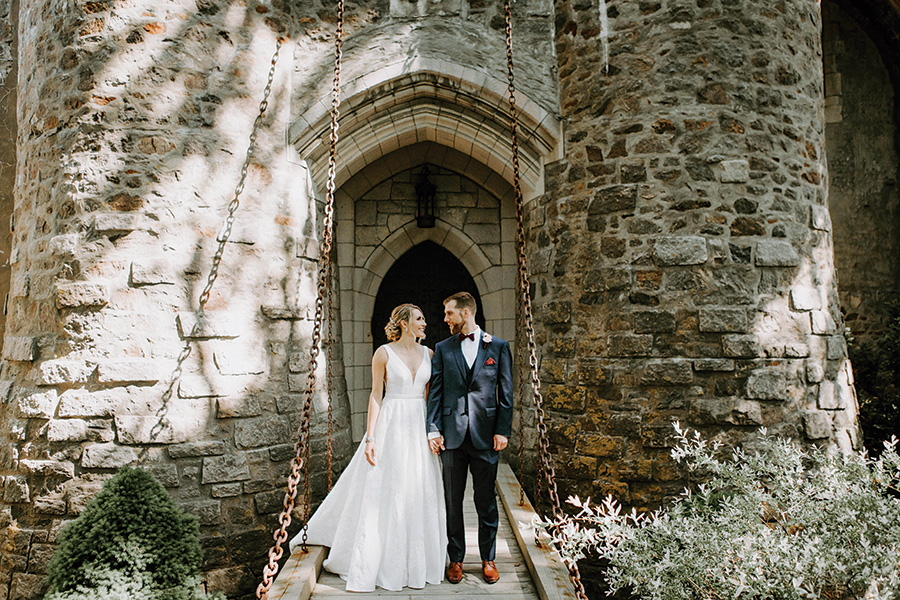 Nothing makes a good first impression quite like homemade cookies. So when Mike Seskevich showed up to his first date with Laura Kowalski bearing Christmas treats, he instantly won her over. Three years later, Mike had another surprise for Laura: a proposal. This time, he created holiday cards with a picture of the two of them and their dog, Cider, that read, “Christmas came a little early. We’re engaged.”

Shortly after, the couple planned a seaside wedding at Hammond Castle in Gloucester. The ocean provided gorgeous views for their outdoor ceremony, while the medieval castle served as an intimate reception space for their 84 guests. And although they tied the knot in June, Mike and Laura chose Michael Bublé’s “Cold December Night” for their first dance. “Christmas was so sentimental to us, and we didn’t have a specific song that would be appropriate,” Laura says. “So we [danced] to what we wanted to dance to!” 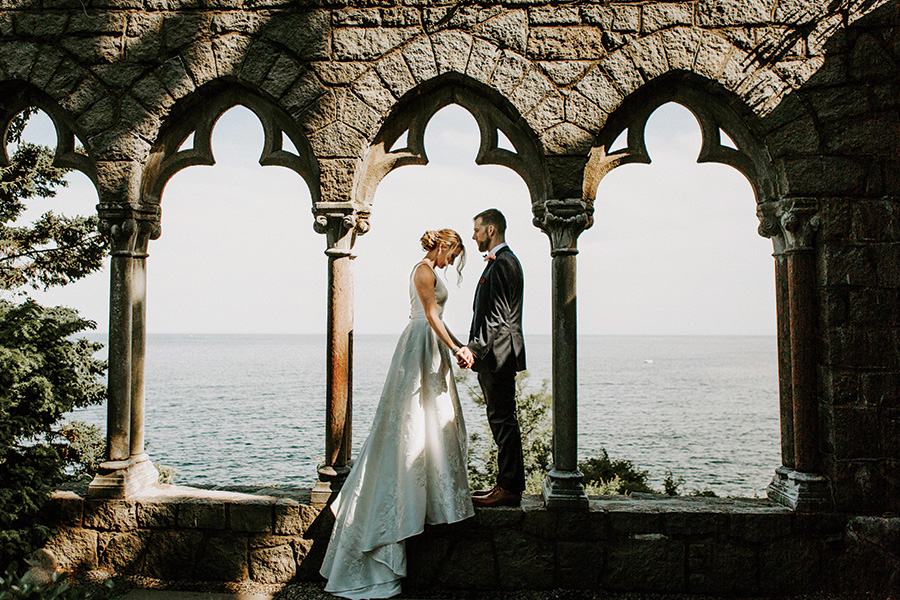 Although Laura originally dreamed of wearing a bohemian-style dress, she chose a silk ballgown with a matte lace appliqué and a plunging back from Essense of Australia. “As soon as I put it on,” she says, “it fit like a glove.” 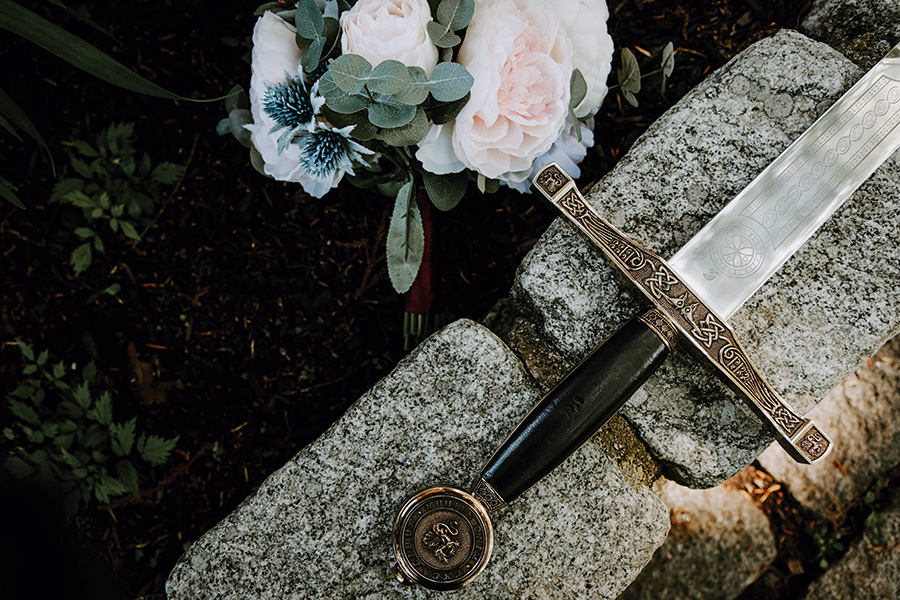 With help from her sister-in-law and mother, Laura used silk peonies and greenery to craft the floral arrangements. “I wanted to make [the pieces] myself, [so the silk flowers] were a good way of making them ahead of time without worrying about them wilting,” Laura says. 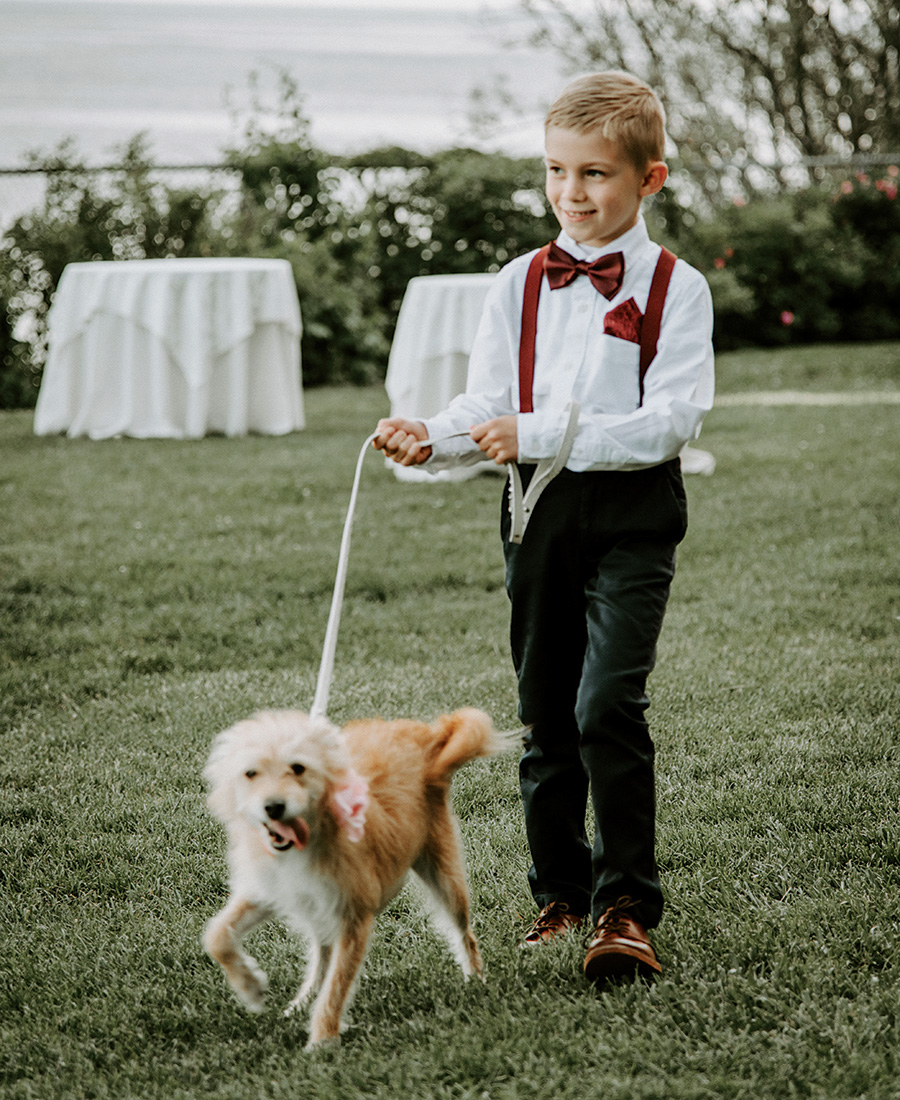 Laura’s six-year-old nephew, Griffin, walked Cider down the aisle. “He was practicing months ahead of time. Every time [my nephew] would come see us, he’d take her for a walk,” Laura says. 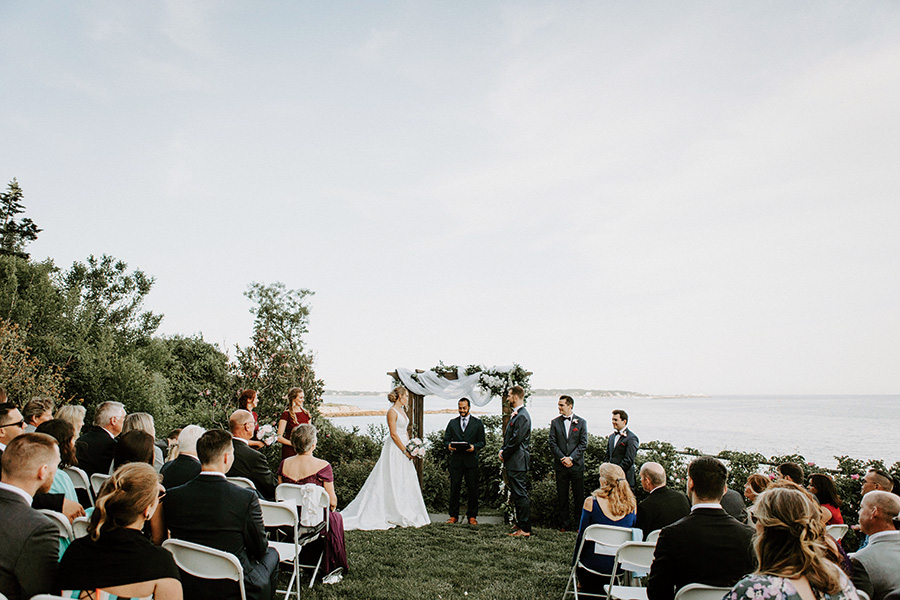 Laura and Mike wrote their own vows and later framed them to display in their apartment. “The cute thing was that when we read them, we said a lot of the same things to each other,” Laura says. 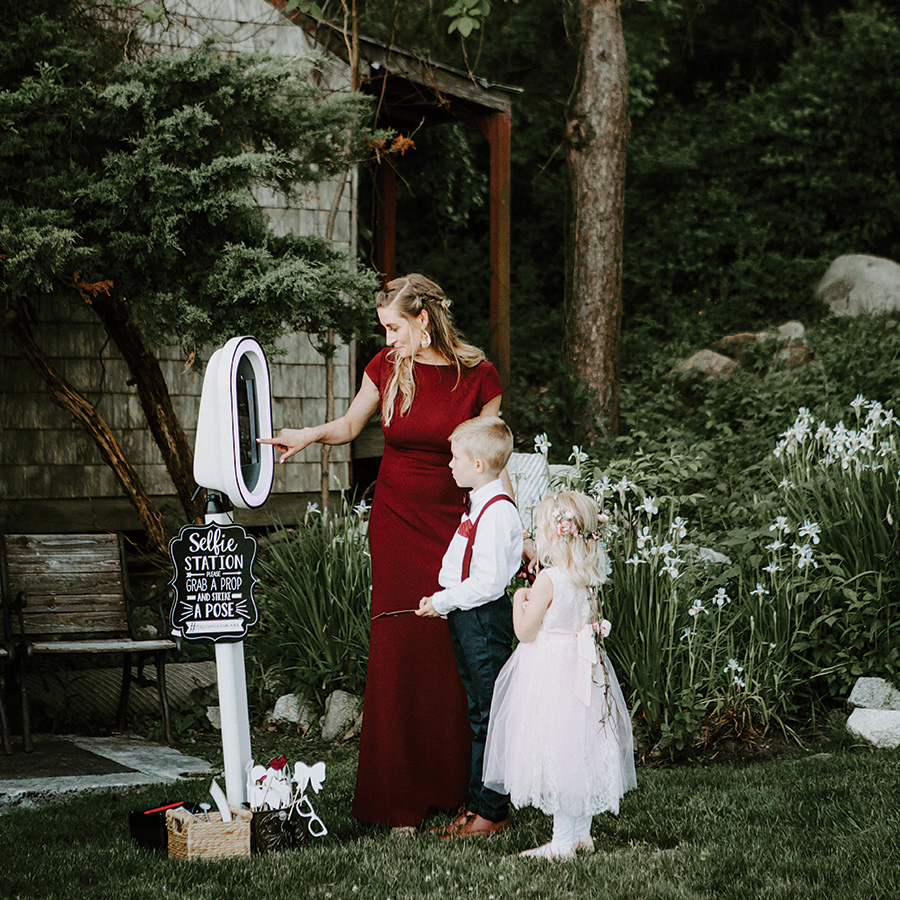 Guests of all ages struck poses in the open-air photo booth, which delivered snapshots and Boomerangs straight to their phones. 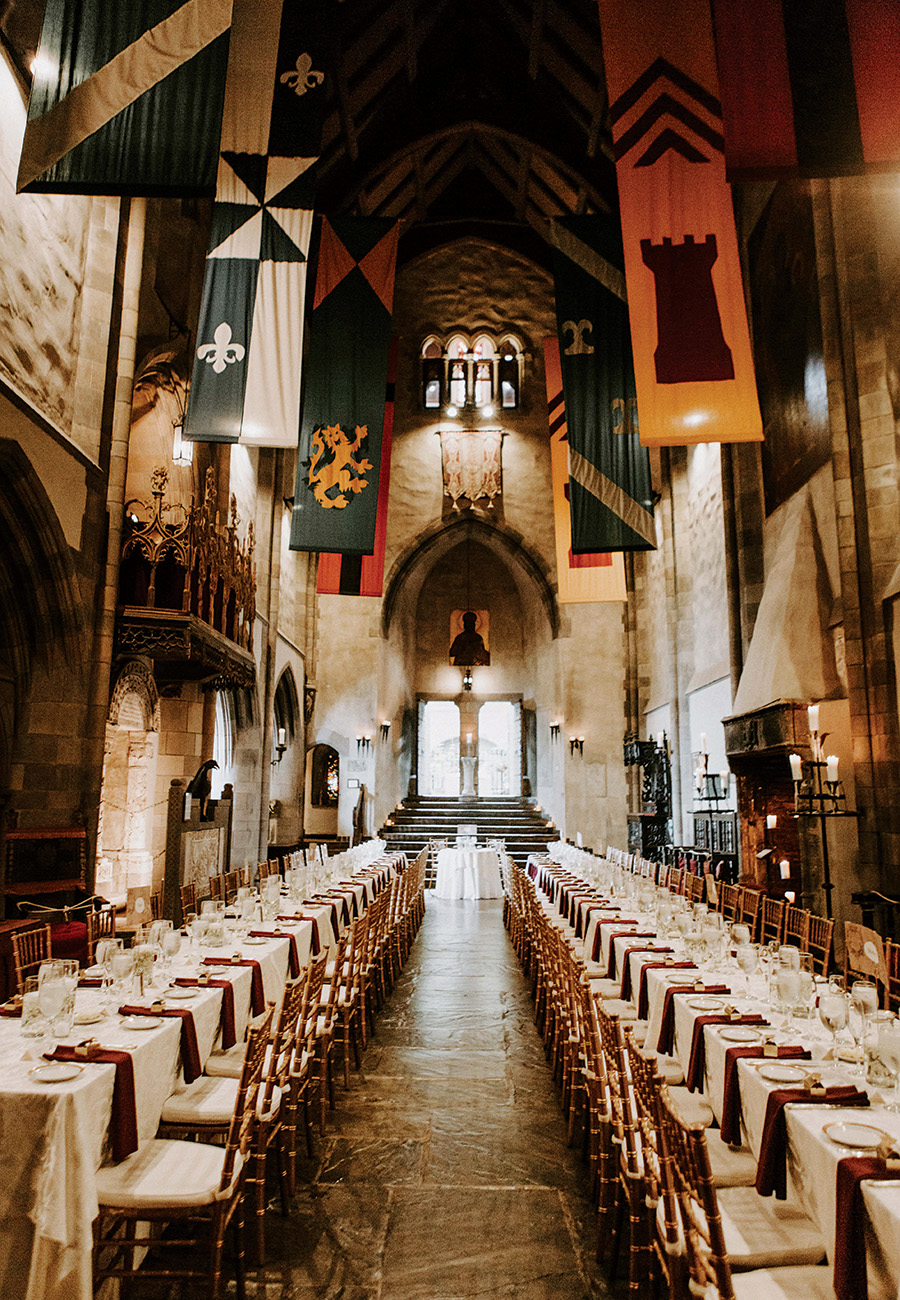 Inventor John Hays Hammond Jr. designed the castle, which boasts vaulted ceilings and a courtyard modeled after what would become the Isabella Stewart Gardner Museum, in the 1920s as a gift for his wife. 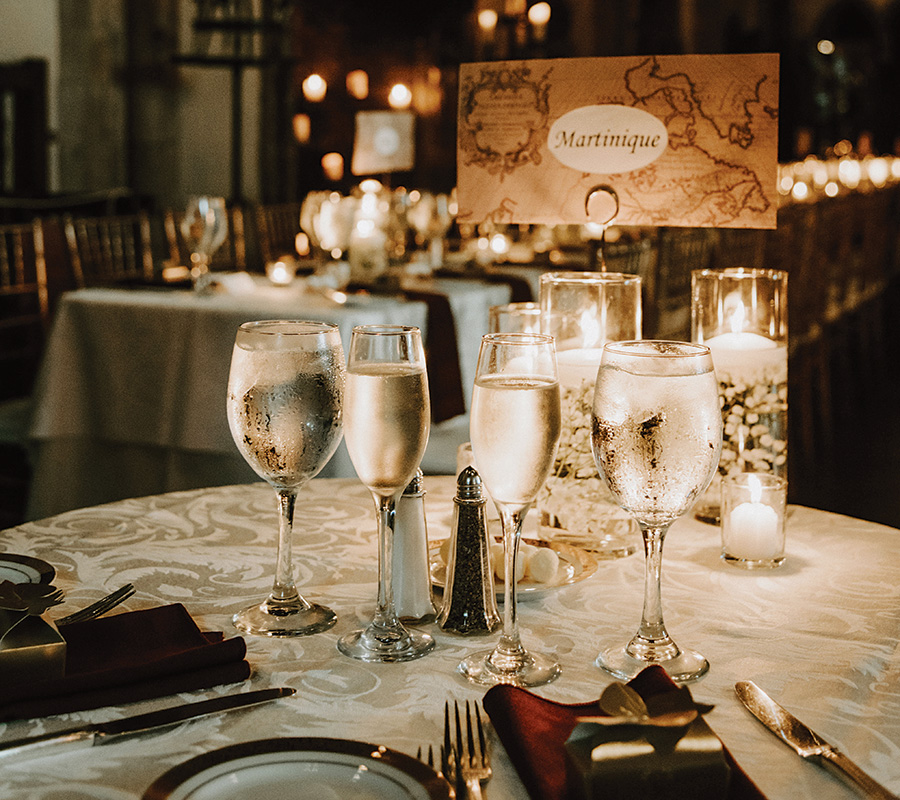 Instead of traditional table numbers, Laura and Mike labeled the tables with places that they had traveled to together, including Martinique—Mike’s favorite destination. 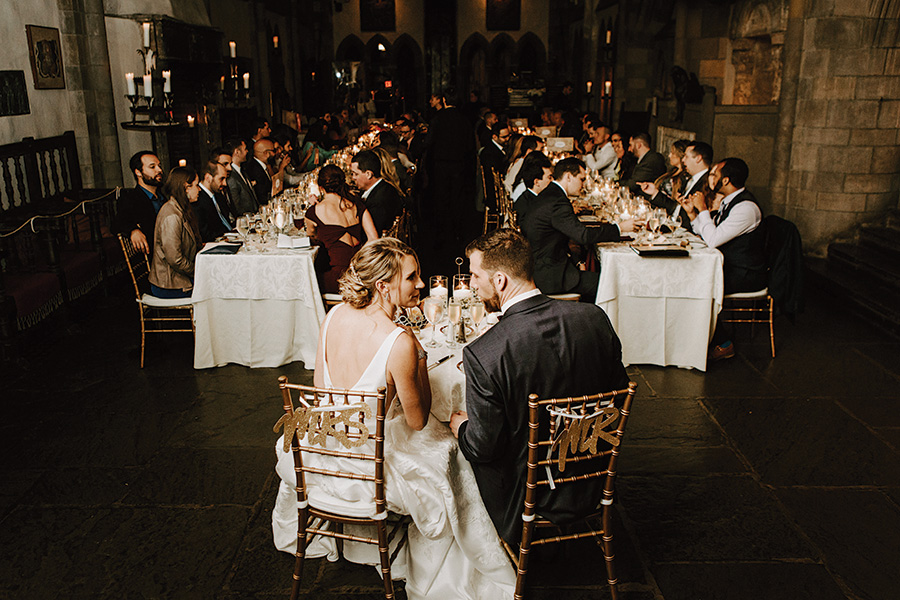 Candles and baby’s breath submerged in water added a simple yet elegant touch to the tables. 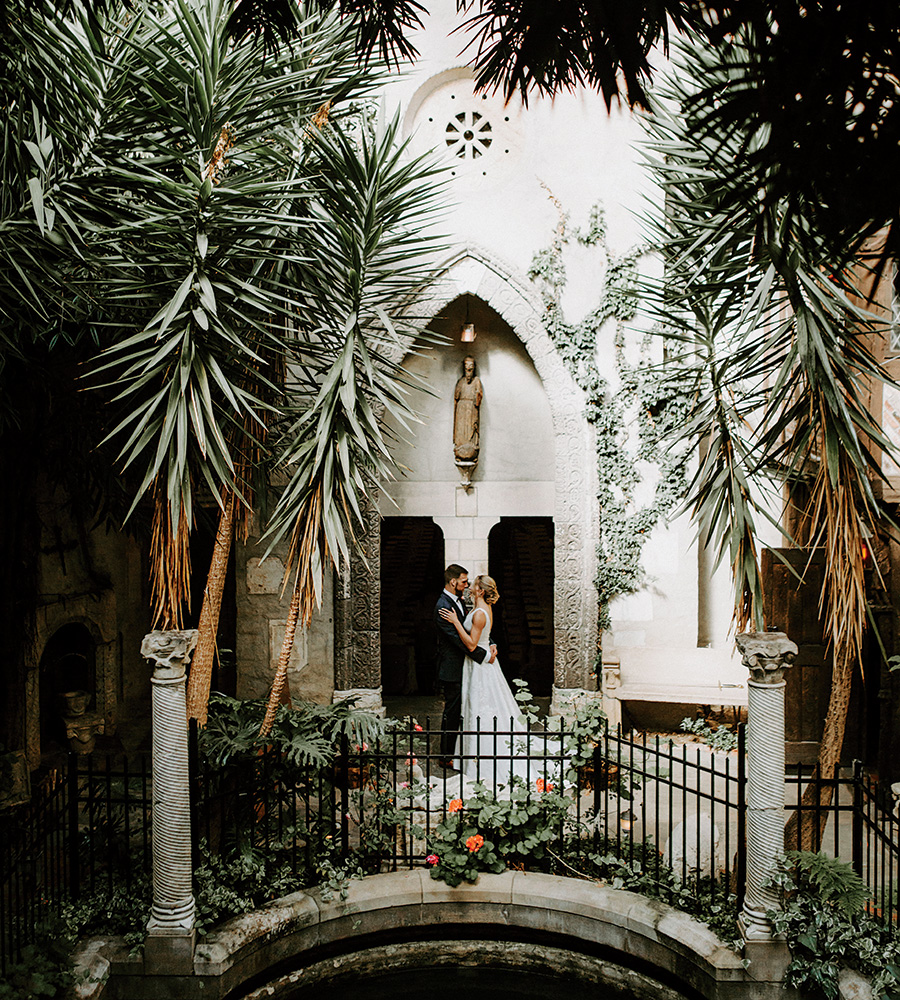