The couple aimed for a laid-back, industrial vibe with white brick walls, a garden-plucked bouquet, and homemade apple pie. 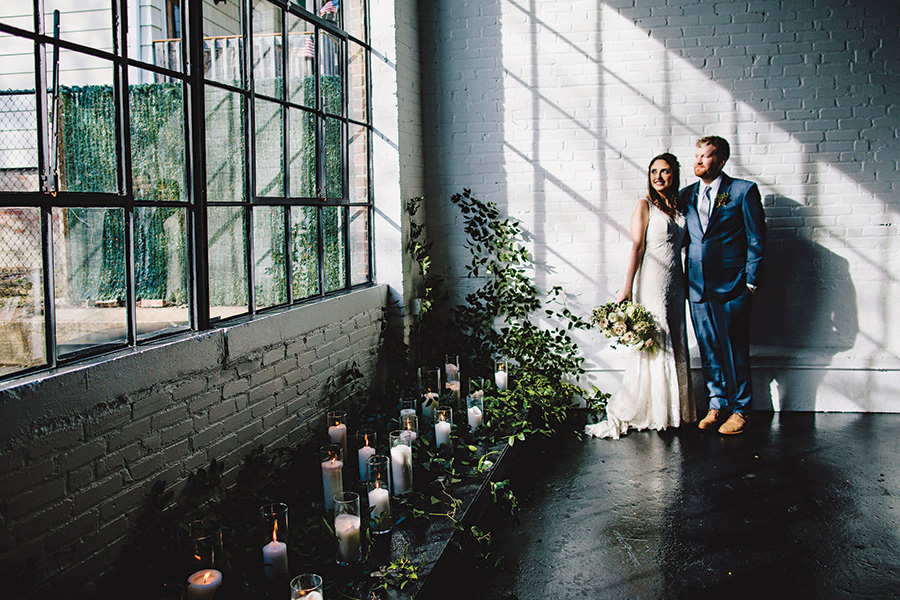 Sara Ciaburri and Brian Henthorn first crossed paths when they matched on Coffee Meets Bagel in 2015—or so they thought. As a mutual friend pointed out after the pair started swapping messages on the app, the soon-to-be couple had actually met at a party about 10 years prior. Neither Sara nor Brian recalled the encounter, but that didn’t matter: They got together for drinks in Harvard Square the day before Valentine’s Day and hit it off. “We needed the Internet to bring us together,” Sara says.

When the pair began planning their nuptials just over three years later, they fell head-over-heels for Warehouse XI—a 3,225-square-foot event space in Union Square. With painted brick walls and oversize windows, the venue was a perfect match for the industrial vibe they craved. The icing on the cake? Warehouse XI sits near the border of Cambridge and Somerville, the couple’s adopted hometowns. “We both lived within blocks of the venue for years,” the bride says, “so it felt meaningful.” 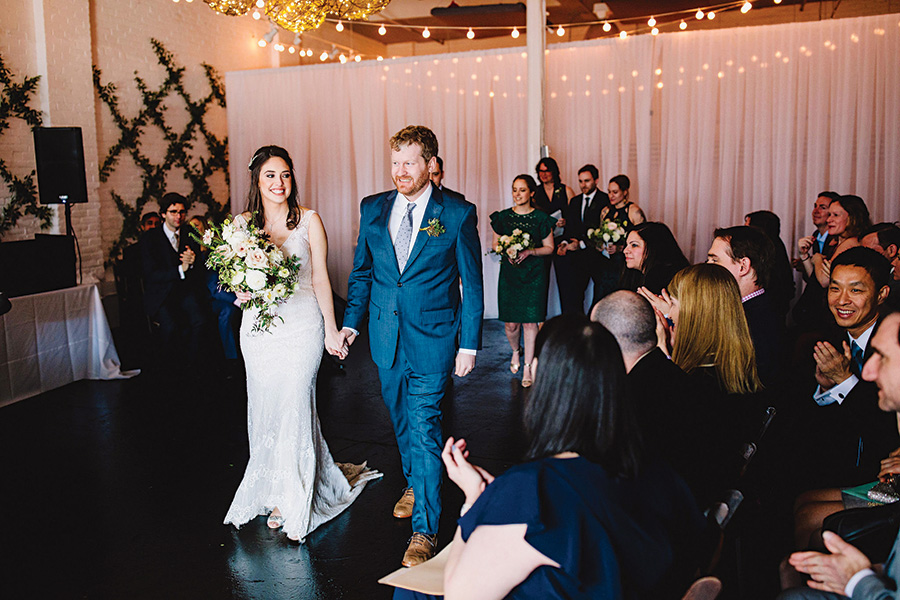 DRESS
Sara chose her Allure Bridals gown for its simple, no-frills style, which she accessorized with a suede jacket from Blank NYC. 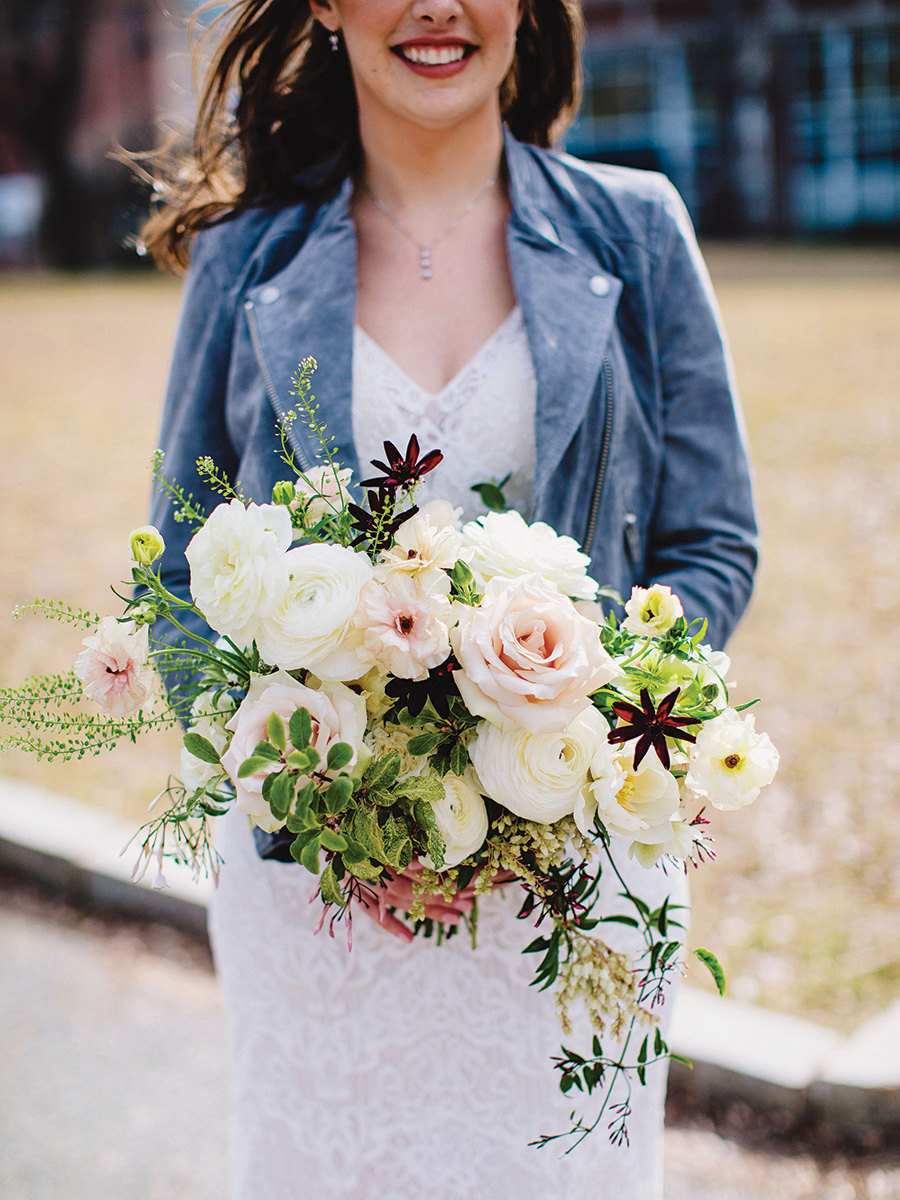 The bride’s free-flowing bouquet featured seasonal blooms such as ranunculus, hellebore, and chocolate cosmo. “I wanted something that looked like it came out of a garden,” she says. 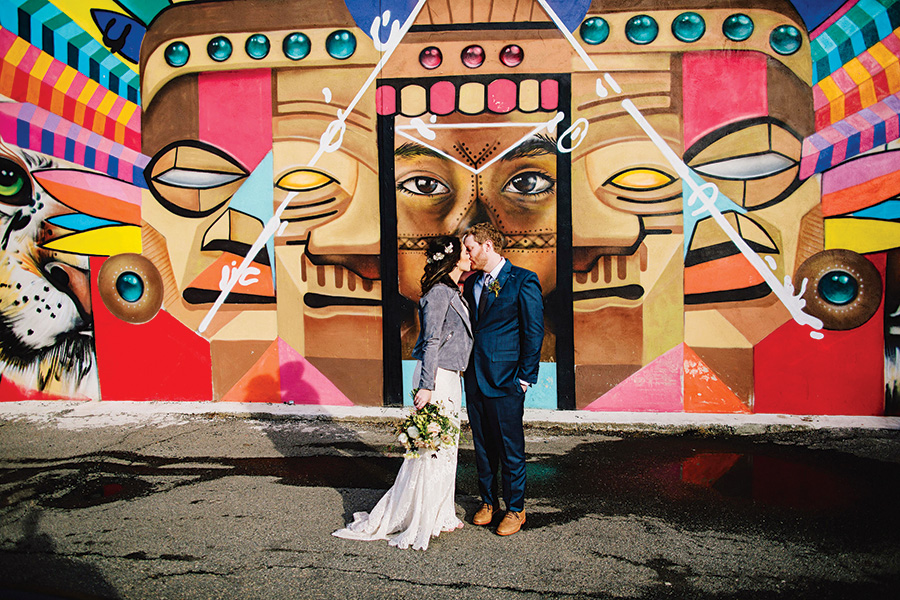 After the ceremony, the couple posed for portraits near a mural outside of Urban Axes in Union Square. 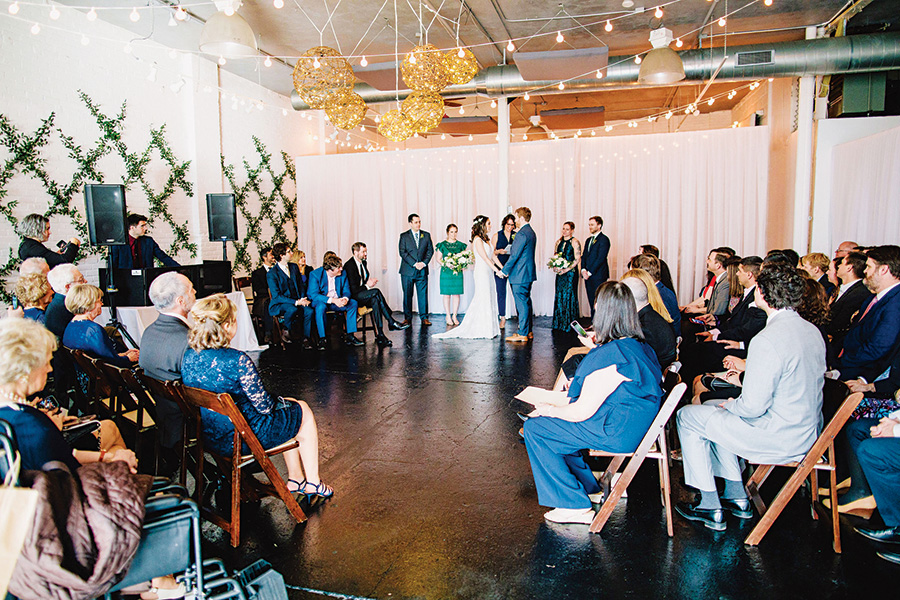 At the couple’s ceremony, which was officiated by Brian’s close friend Katie, guests sat in rows surrounding the pair and their siblings, who stood with them. “It was exactly what we wanted—to be near all of our friends who are dear to us,” the groom says. 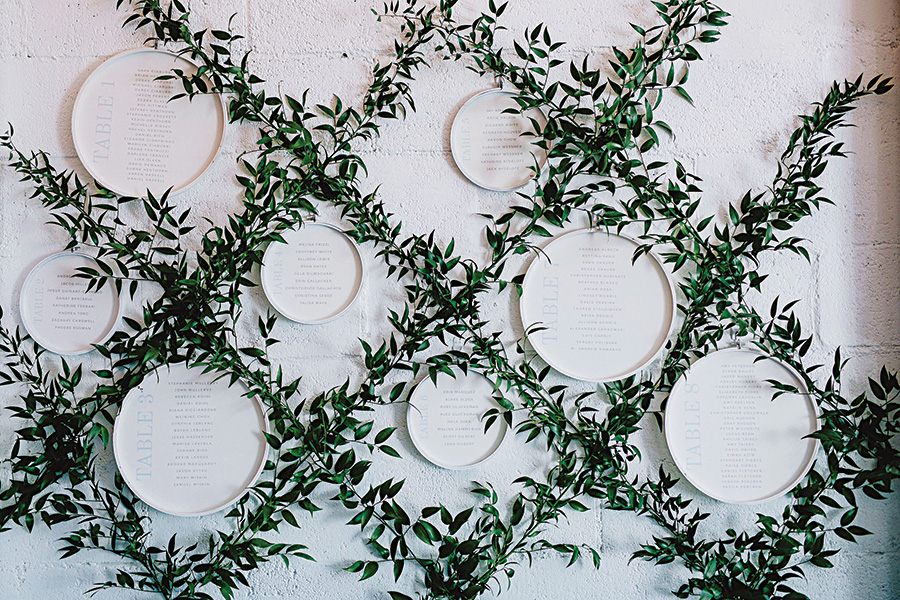 Drawing inspiration from a garden trellis, florist Twig + Briar used greenery to dress up the venue’s walls—one of which was used as the backdrop for the circular seating charts and, later, the couple’s photo booth. 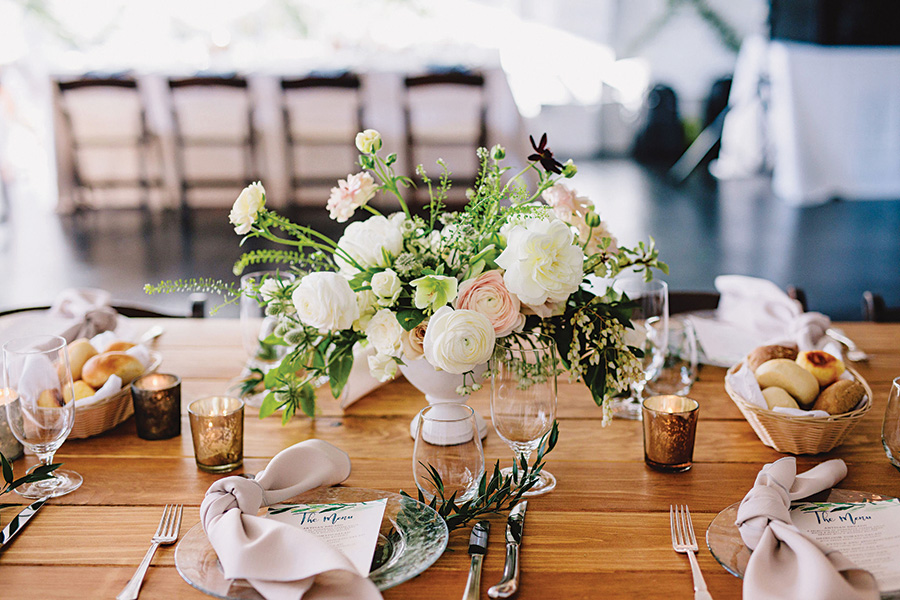 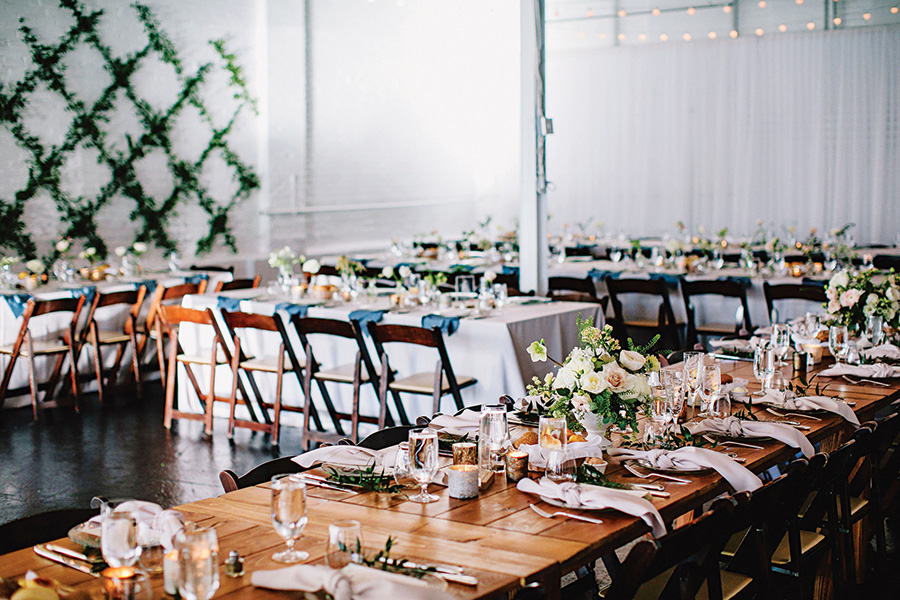 The bride and groom topped a long farm table with small sprigs of greenery, as well as cascading floral arrangements that matched Sara’s bouquet. 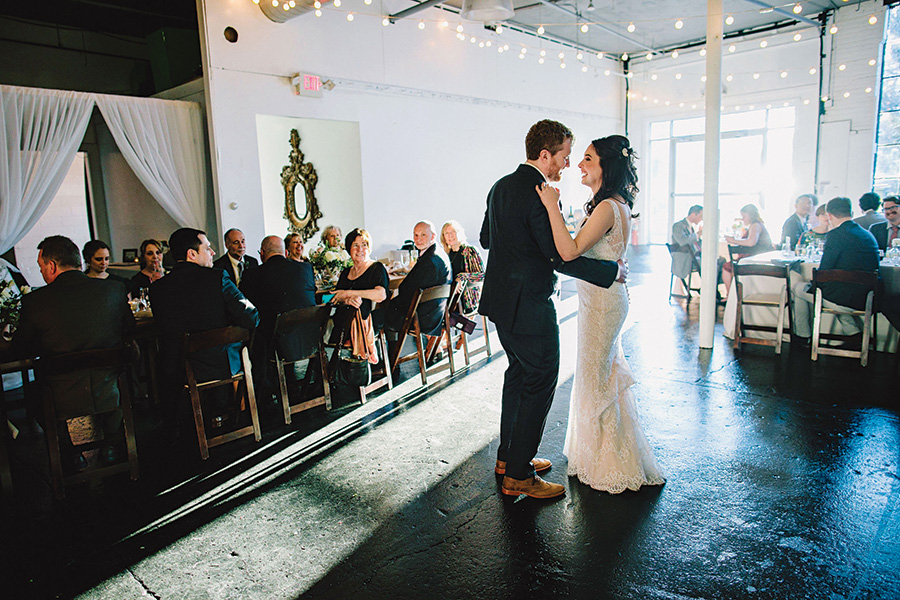 Sara and Brian had their first dance to the Yeah Yeah Yeahs’ “Hysteric,” a longtime favorite song of the bride. “That one just seemed right,” Brian says. 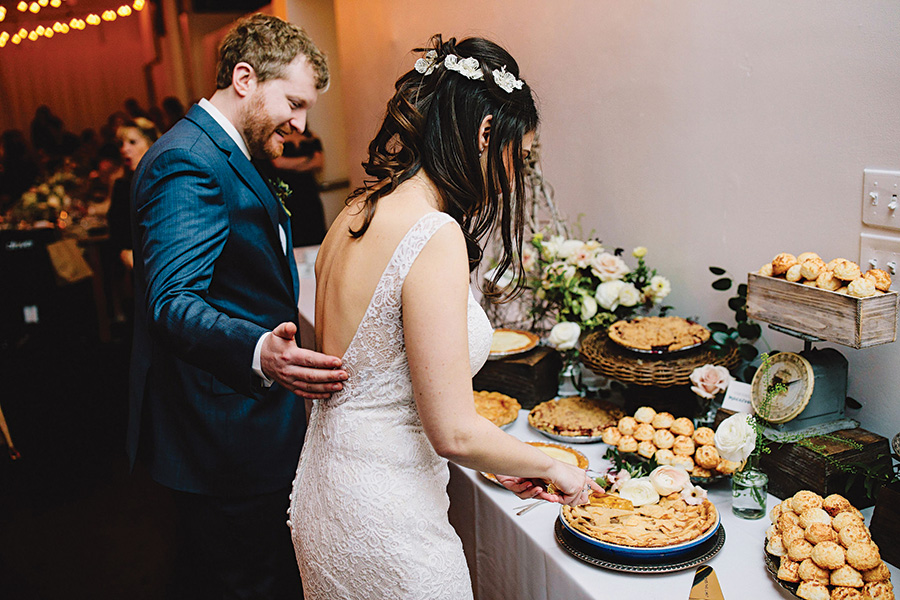 Petsi Pies and Events by BH brought to life the couple’s dessert table, which included an apple pie baked by Sara’s mom, Debra. “I think Brian and I knew [we wanted pie] before we even got engaged,” Sara says.