Married in a gorgeous garden ceremony, the couple was pretty adorable, too.

Amanda Duquette and Andrew Waylett joke that they met the old-fashioned way: online. They first connected on the dating app Hinge in January 2016. Later that month, they went on their first date at Loco Taqueria & Oyster Bar in South Boston, right around the corner from the condo they now share together. “It happened all pretty quickly,” Amanda says. From then on, they saw each other regularly, and by February 14th they were officially valentines.

When the couple jetted off for a getaway in France in June 2018, Amanda “was very much expecting Andrew to propose,” she says. Their first stop was Paris, and on their final evening there before packing their bags for Nice, they stopped at the Eiffel Tower to enjoy a sunset picnic. There, their wine date was interrupted by confetti and cheering—another couple had gotten engaged, sending Amanda into tears. However, just a few days later in Nice, the couple climbed to the top of the Castle of Nice, a fortress overlooking the port and beach, and Andrew explained that he had one last thing to do before they left France. Then he got down on one knee. “I cried hysterically the entire time,” Amanda says. She later learned that Andrew had been carrying the ring in his pocket the entire trip, searching for a quiet and secluded location to ask Amanda to be his wife.

One year later, Amanda and Andrew tied the knot in an outdoor ceremony and reception at Glen Magna Farms, where a restored 20th-century mansion sits on 11 acres of lush grounds that reminded them of gardens they visited in Europe. “It had this old-school European flair to it, not like any place you would expect to see in New England,” the bride says. While planning their celebration, Amanda created a PowerPoint presentation full of images that would inspire their blush, dusty rose, and champagne-hued wedding day décor, but she didn’t hold back from incorporating personal touches either—such as a decorative globe to represent their travels, as well as photos from their parents’ weddings. When the big day finally arrived, even a little pre-ceremony rain shower couldn’t ruin their celebration. Everything “went off without a hitch,” Amanda says. “It was perfect.” 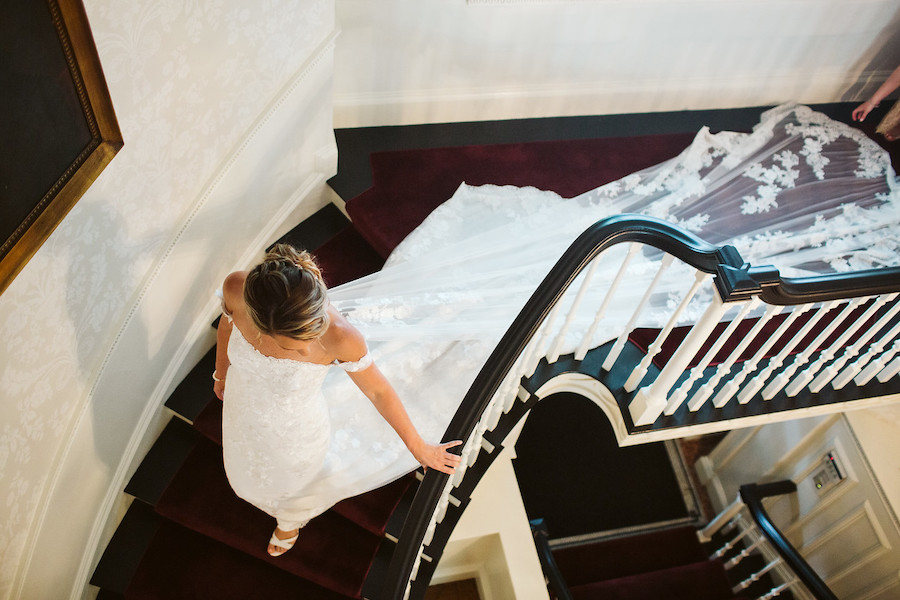 A lover of fashion and modern design, Amanda fell in love with an off-the-shoulder gown with lace detailing from Waltham’s La Reine Bridal. “The cape was just different enough,” she says. “[The dress] was still classic but the cape really gave it this different edge that I’d never seen before.”

Amanda’s mother gifted her something blue for her wedding day: a bead made from her late grandmother’s ashes. “She gave it to me as soon as I said ‘Yes’ to my dress so that my grandmother could be with us on my wedding day,” Amanda says. 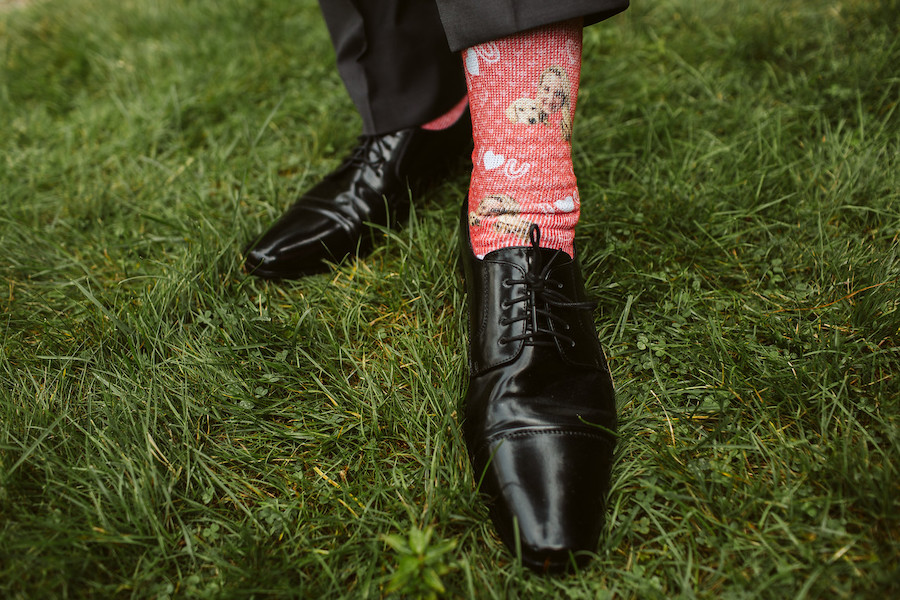 Andrew wore a pair of bright red socks, gifted by the bride for Valentine’s Day the year before, printed with the faces of Amanda and the couple’s dog, Copley. 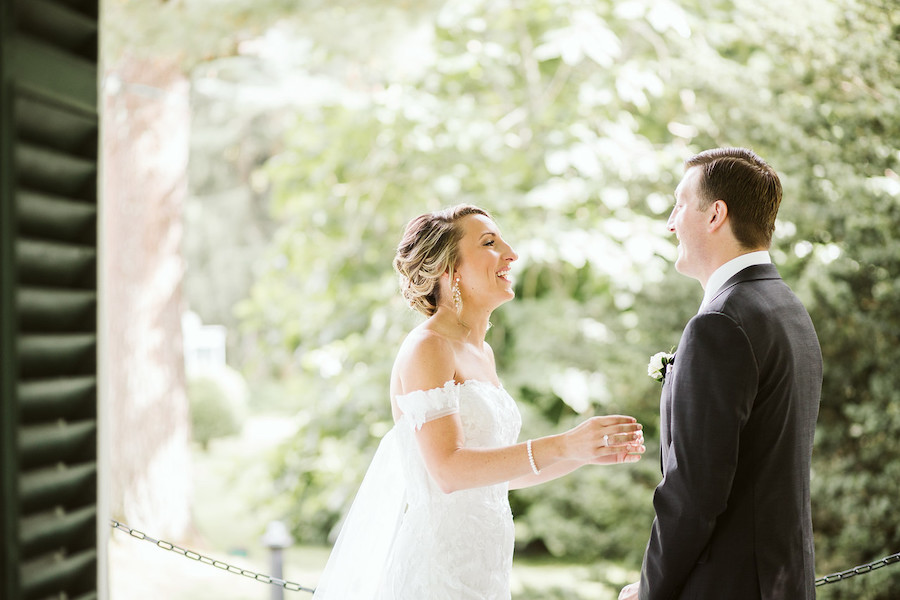 The couple snuck a first look before the ceremony on the mansion’s wraparound porch, hiding from a sudden rainstorm. “I remember tapping him on the shoulder and [saying], ‘You can turn around but don’t cry,’” Amanda says. “When he turned around and looked at me for the first time, I think he started instantly crying.” 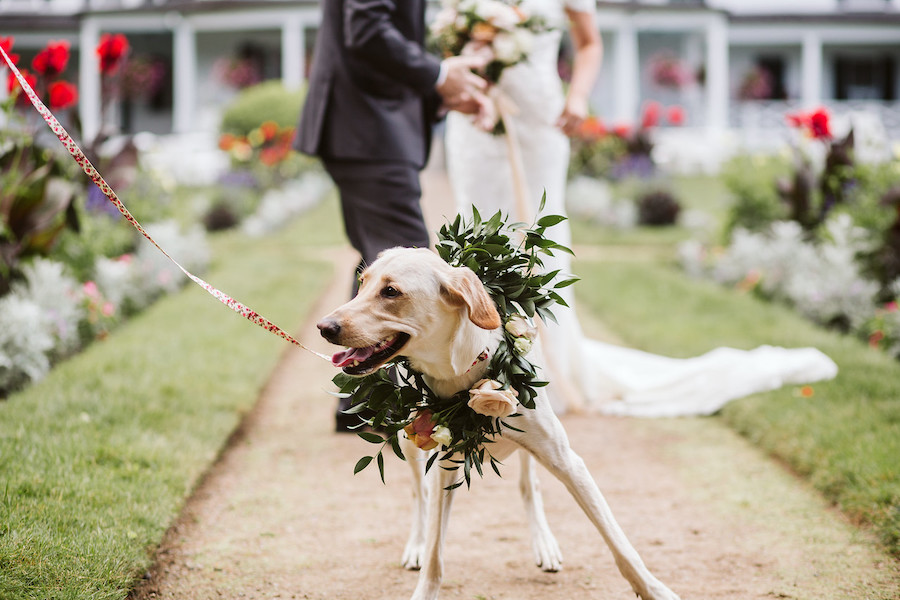 The bride and groom felt their day would not be complete without the presence of their furry pal. Ahead of the wedding, they worked with trainer Danielle Engel of For the Love of Paws to prepare Copley for the big day. 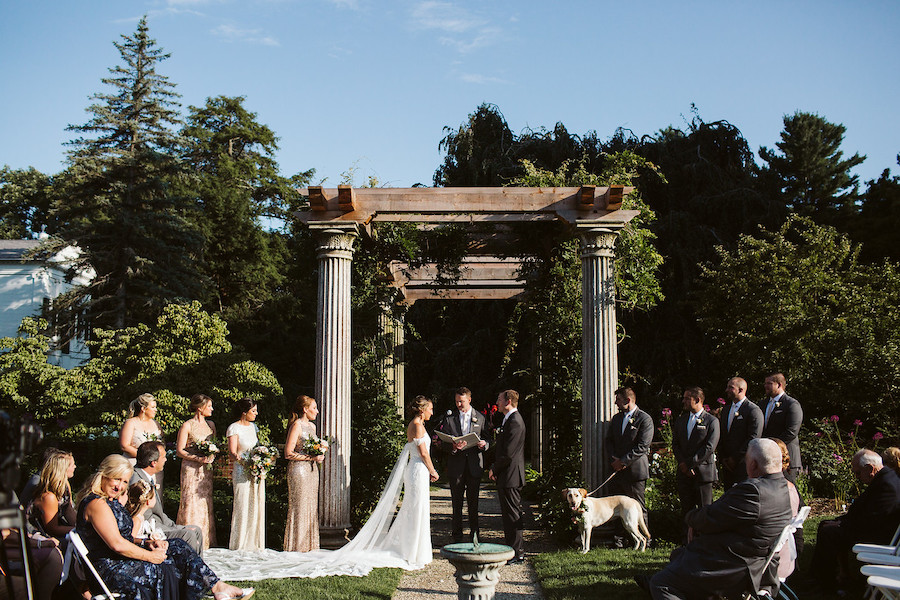 Andrew’s best friend from college, Mike Johnson, officiated the outdoor ceremony. “He’s an excellent public speaker and we just knew that he would do a really amazing job,” Amanda says. “Everyone called him ‘Father MJ’ for the day.” 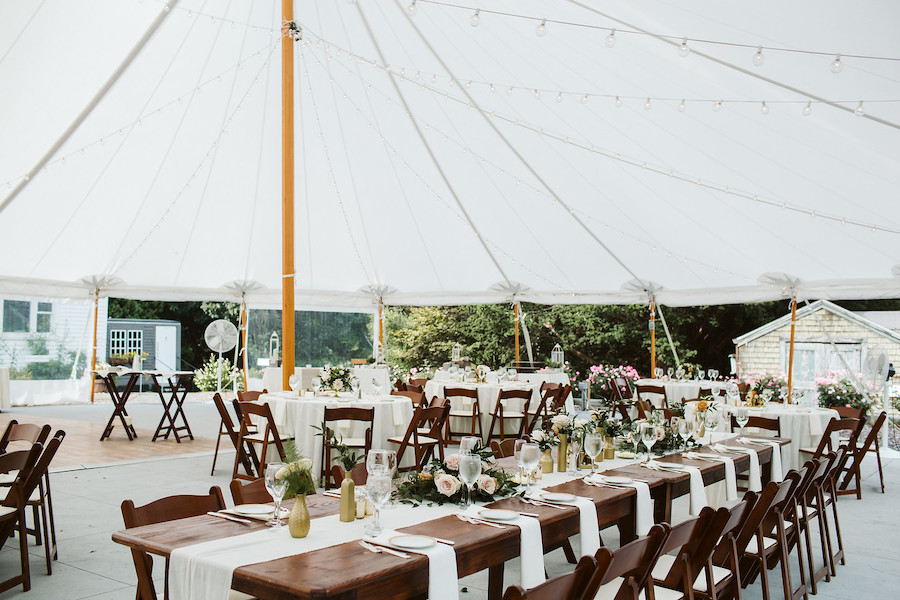 The ceremony took place beneath a sailcloth tent where the tables were decorated with gold, mustard yellow, and dusty rose accents. 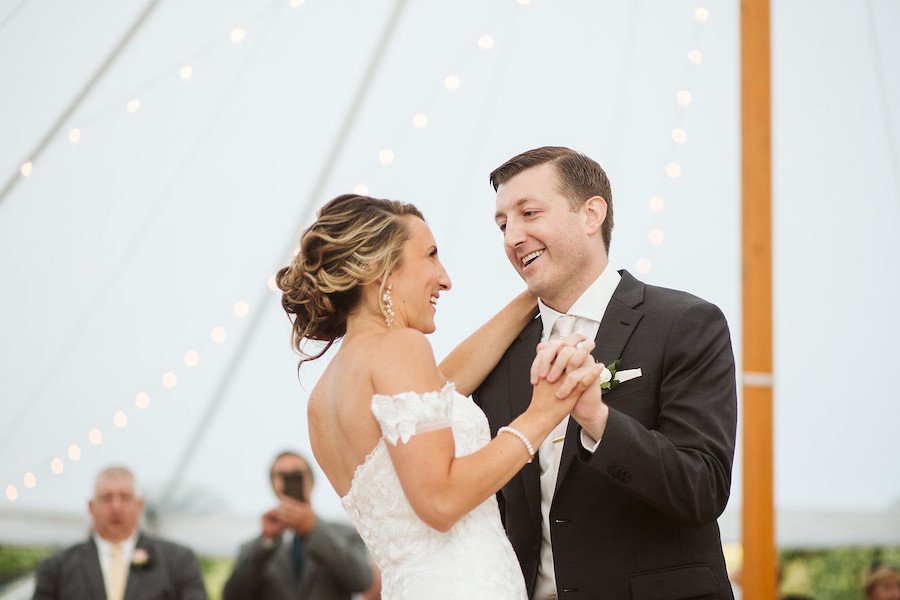 As an ode to the first concert they attended together, Amanda and Andrew waltzed to Kenny Chesney’s “Til It’s Gone” during their first dance as husband and wife. Andrew’s favorite moment was spinning Amanda
around to the lyrics “Twirl you around ‘til my head spins.” 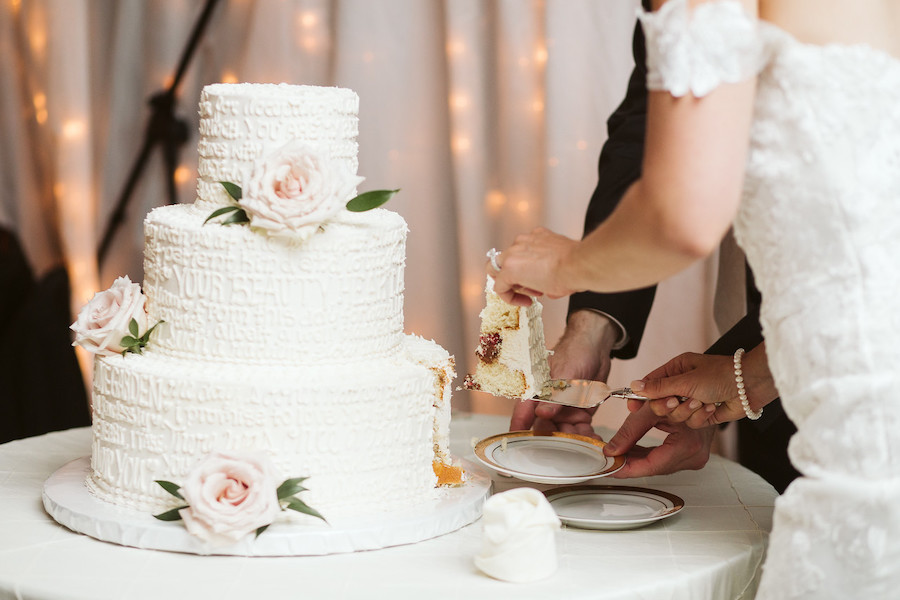 The couple opted for a three-tier cake piped with their wedding vows that was designed and decorated by Amanda’s friend, Lauren Bushery, at Party Favors. “In our wedding vows, I promised him that I would go camping, which is one thing he’s been asking me to do quite a bit, and that I would also take him to the Olive Garden,” Amanda says.