You need to see these cheerful blooms.

August 10, 2019
The Barn at Aster B. Flowers
Essex, Massachusetts 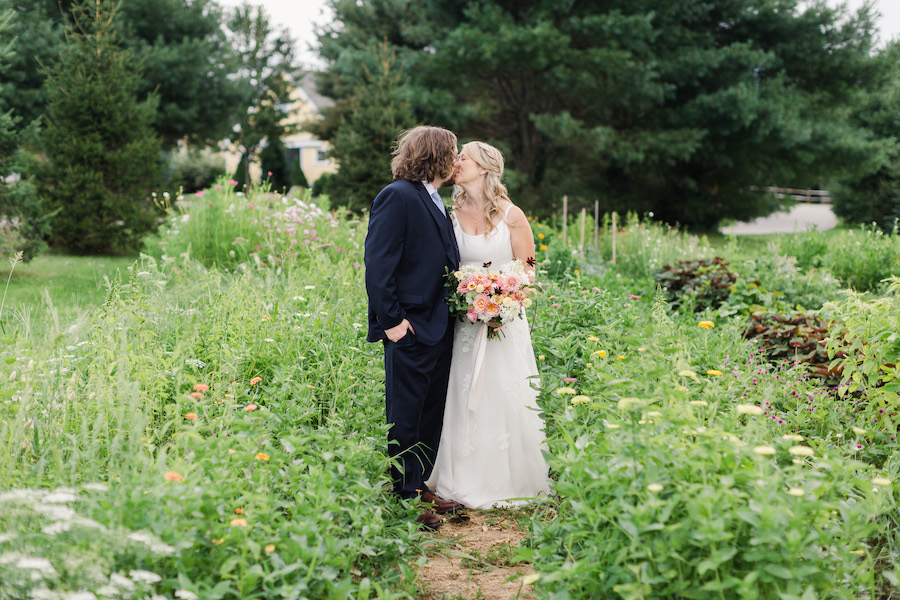 Rebekah Mindel and Josh Lane first met in 2014 when Rebekah was reuniting with an old friend in Santa Cruz, California. Rebekah was temporarily living on the West Coast for a three-month internship, and her friend, who she hadn’t seen in a decade, brought Josh along to the brewery where they were meeting. “As soon as I walked in, I noticed Rebekah’s smile lighting up the room. There was some magnetic pull there,” Josh recalls. Rebekah agrees. “We just connected,” she adds. So the two started spending time together, going on hikes and beach trips, and hanging out beside campfires and in dive bars. Soon though, it was time for Rebekah to return to the East Coast, where she was starting as a flower-farm manager at Aster B. Flowers in Essex, Massachusetts. Her first few months at the farm were busy, so the two only kept in touch sporadically throughout the summer. “It wasn’t until September when the farming and wedding seasons died down that we talked on the phone for like three hours, and we talked about everything,” Rebekah recalls. “That was when we knew ‘Okay we’re going to have a long-distance relationship now.'”

By 2016, the two “both had a sense” they’d get married, Josh says. “We’d been talking about it here and there a bit,” he says. In January, Josh visited Rebekah in upstate New York, where she’d moved after leaving her job in Essex. During his stay, he surprised her with a trip to nearby Mohonk Mountain House, where coincidentally his great-grandparents had honeymooned, for a spa day. After enjoying massages, the couple set out on a hike. “It was starting to get dark and we were hiking around in the snow,” Josh recalls. “I was looking for the perfect spot [to propose] but there was snow everywhere and I thought, ‘Where am I going to kneel? What’s a good place with a view?'” Then, just as the sun was setting, they happened upon a spot called Eagle Ridge, which looked out over the surrounding valley. “That’s where I paused and knelt down,” Josh says. Rebekah was stunned. “I think I cried and just put my hands over my mouth,” she says. “Then, of course, I said, ‘Yes.’ It was such a beautiful happy moment.”

When Josh and Rebekah—a flower farmer and the owner of floral-design studio Meadow Wilds in New York’s Hudson Valley—began planning their wedding, recruiting vendors who “really got the aesthetic” of their day was key, the bride says. Therefore, many of the vendors they chose were also Rebekah’s industry friends. “It was like piecing together a beautiful handpicked tapestry,” Rebekah explains. When it came to choosing their venue, meanwhile, Rebekah had long hoped she’d tie the knot at a flower farm, and more specifically at the 17th-century barn at Aster B. Flowers, where she’d worked shortly after meeting Josh. “We wanted to be surrounded by flowers,” Josh explains. “We like being close to nature, and it’s the perfect place to feel surrounded.” Though Rebekah left the flowers to Keelia Otten of Helios on the big day, she had a very specific vision. “When I knew our wedding would be in August, the first thing that came to mind was peaches and apricots. I wanted our wedding to [feature] the colors of the season,” the bride says. That called for a palette of dusty pinks and creams, plus blues as a nod to the nearby ocean. In the end, the celebration was “the most beautiful night of our lives,” Rebekah says. “And we feel so grateful and honored we got to be married there. We got a lot of feedback that our expression of love really inspired a lot of people. So I think that’s what’s left in everyone’s hearts.” 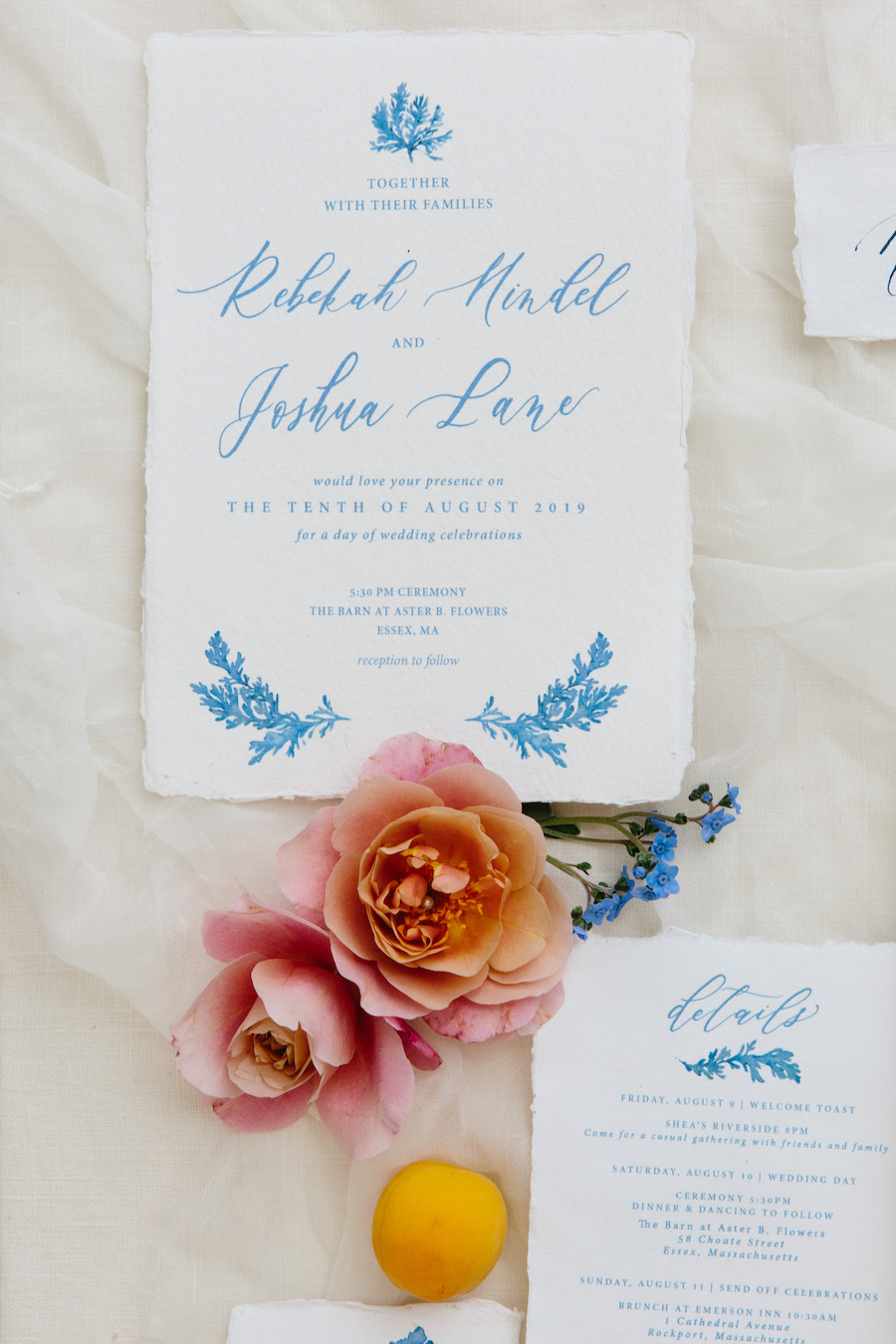 The couple’s invitations were a team effort, from the deckle-edge paper their friend Shellie Pomeroy of Silk & Willow gifted them to the suite’s watercolor seaweed illustrations created by friend and artist Jaime Reynolds. 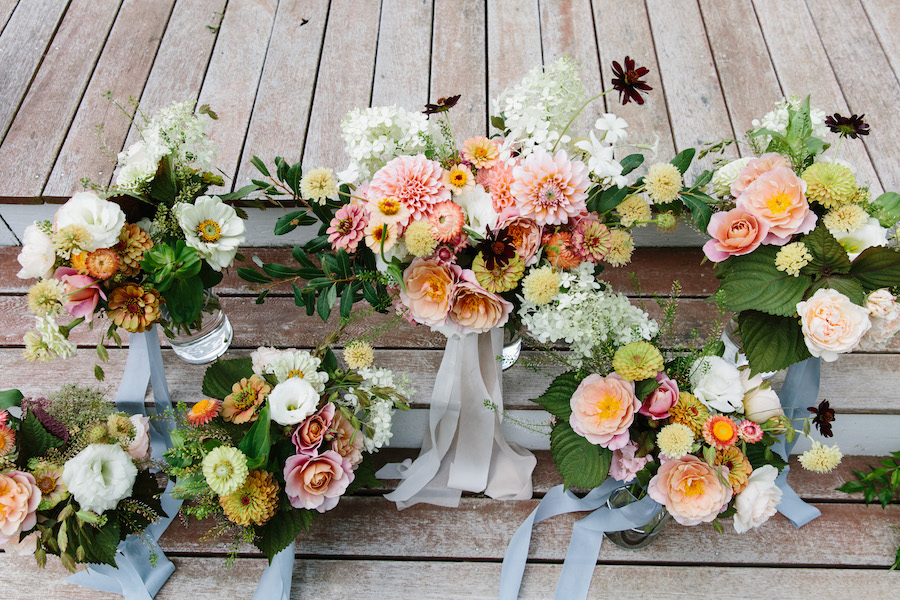 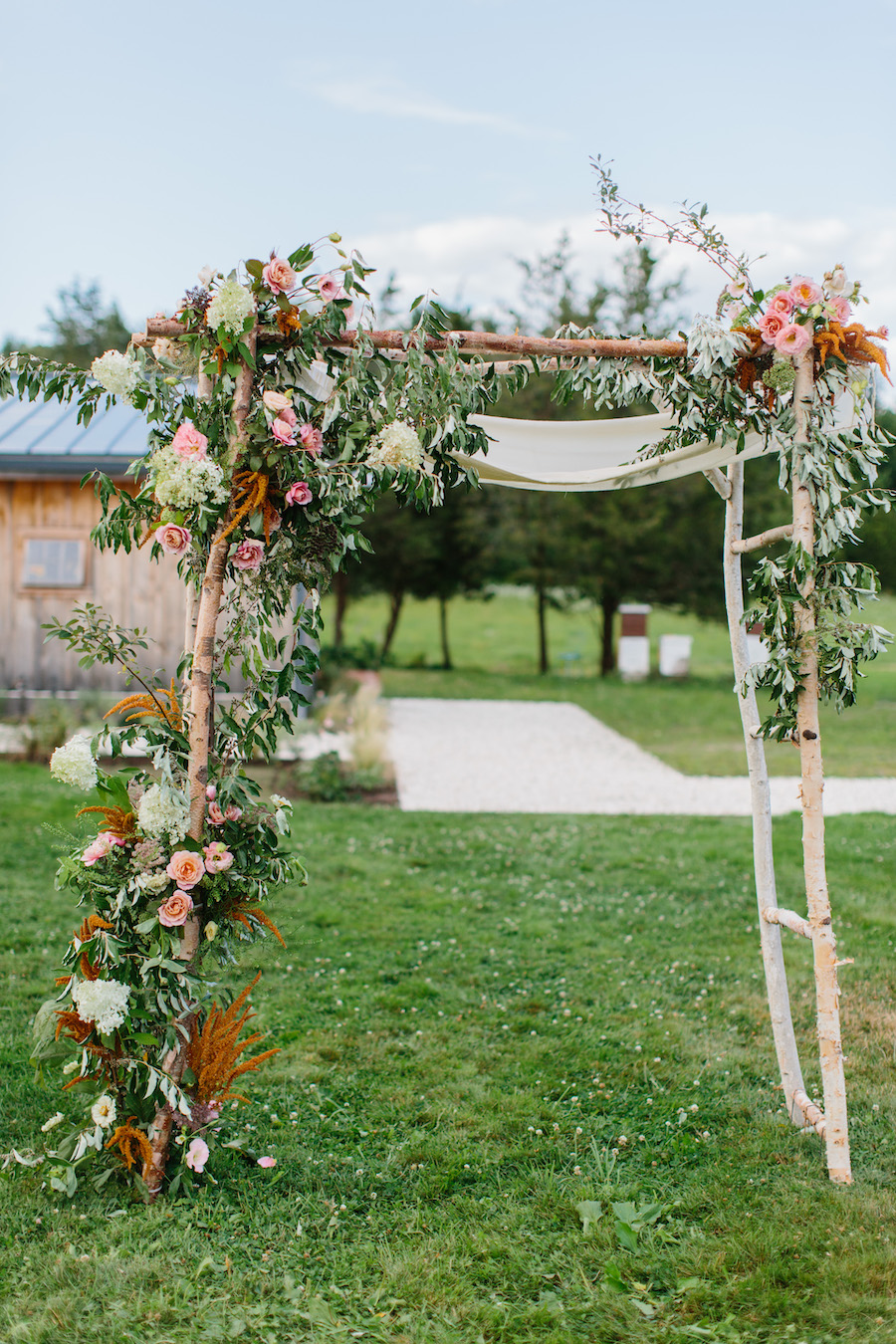 Roses, Rebekah’s favorite flower, and other blooms adorned the couple’s vibrant chuppah. “We wanted [Keelia Otten] to decorate the chuppah for us and make it feel really protected and embraced,” the bride says. 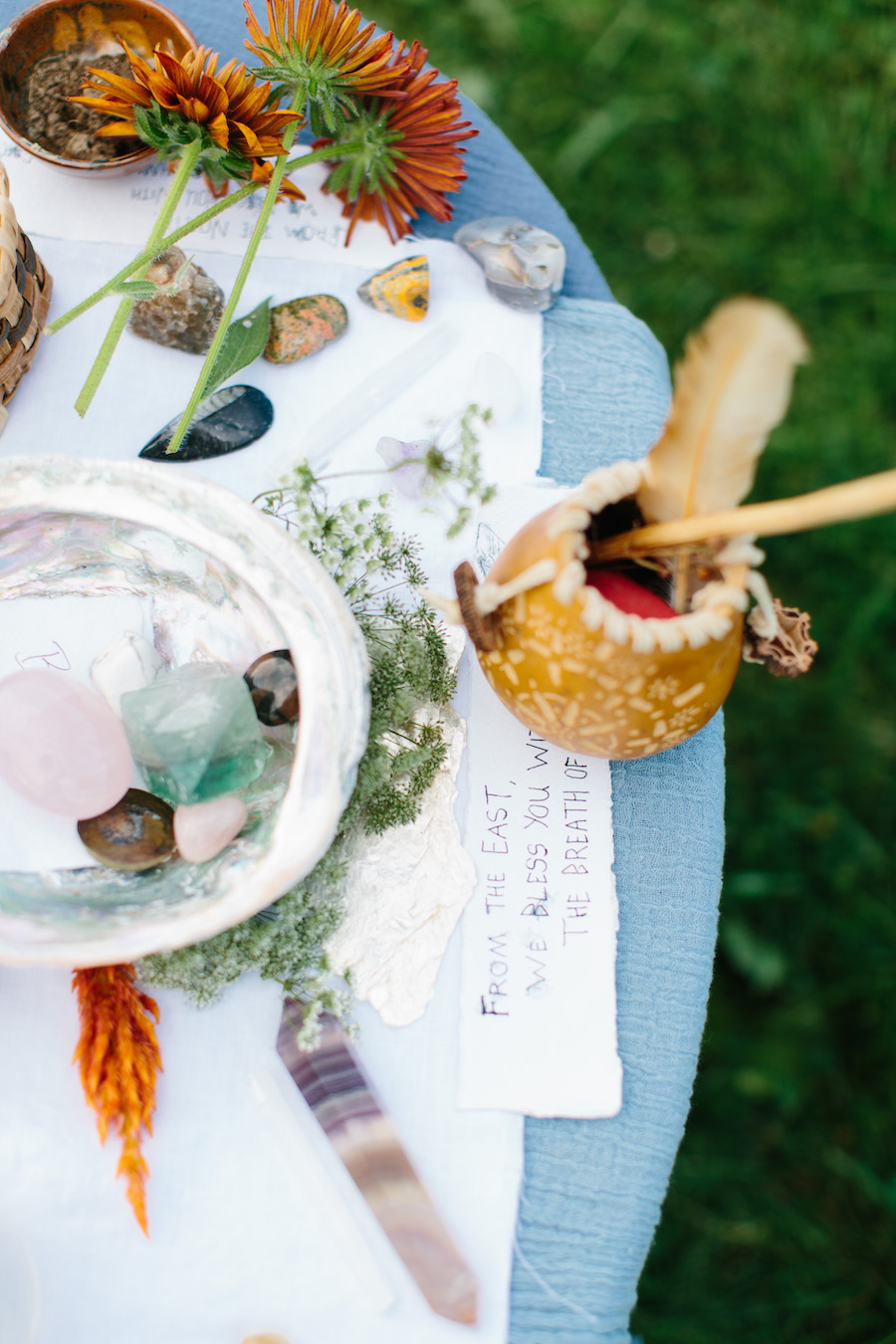 In addition to the Jewish elements of their wedding ceremony, Rebekah and Josh wove in nods to the natural world. “We made our own traditions,” the bride says. That included a table with stones and other objects that symbolized the four cardinal directions as well as the four elements. “Our [bridal party] each represented a direction and an element so they could bring a blessing from that direction or element into the ceremony,” Josh explains. 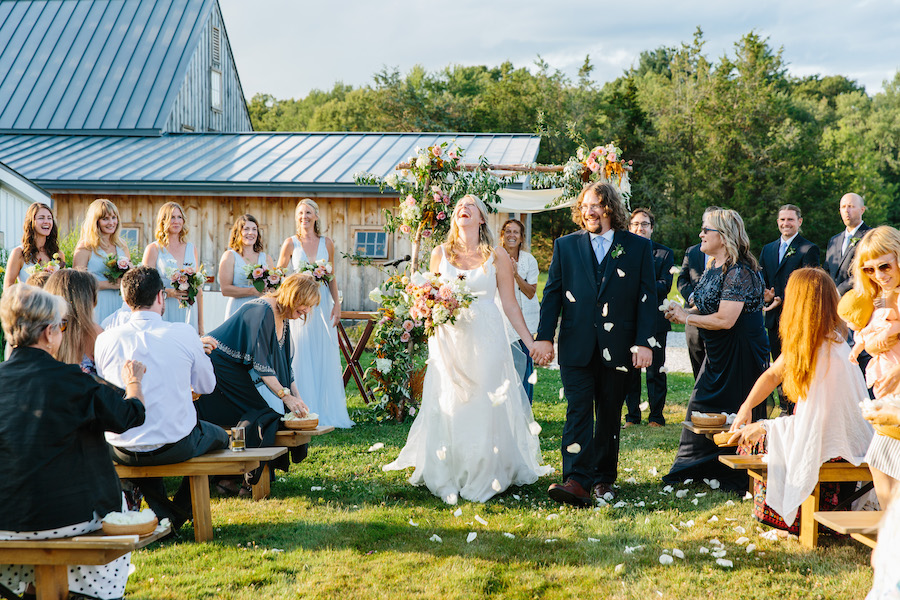 Rebekah knew from the beginning that she wanted to tie the knot in the summertime. “I love August and I always wanted to get married in the heat,” she says. 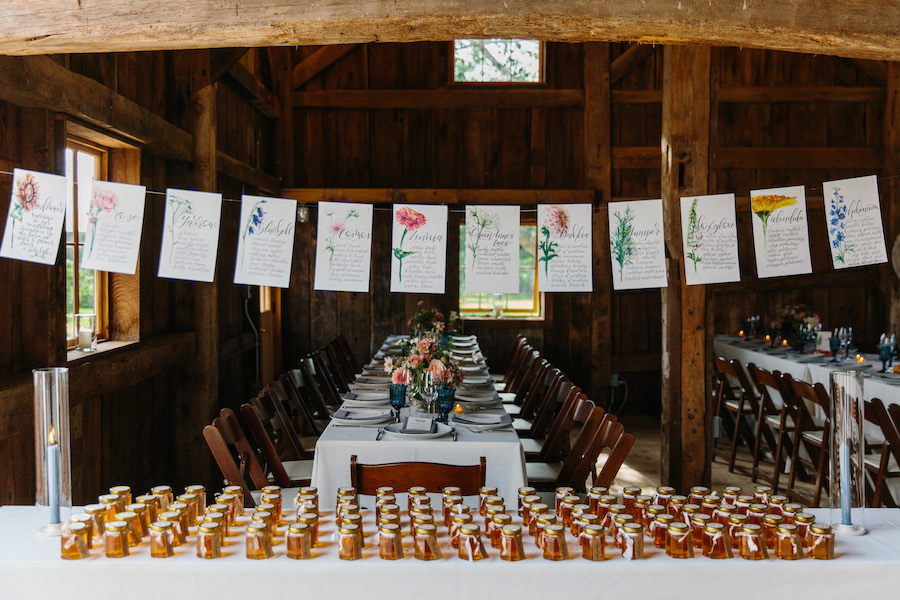 The pair named their reception tables after flowers grown at Aster B. Flowers and Meadow Wilds. Holly Erickson of Chive Events created the couple’s seating charts, which featured watercolor illustrations of flowers Rebekah had photographed. 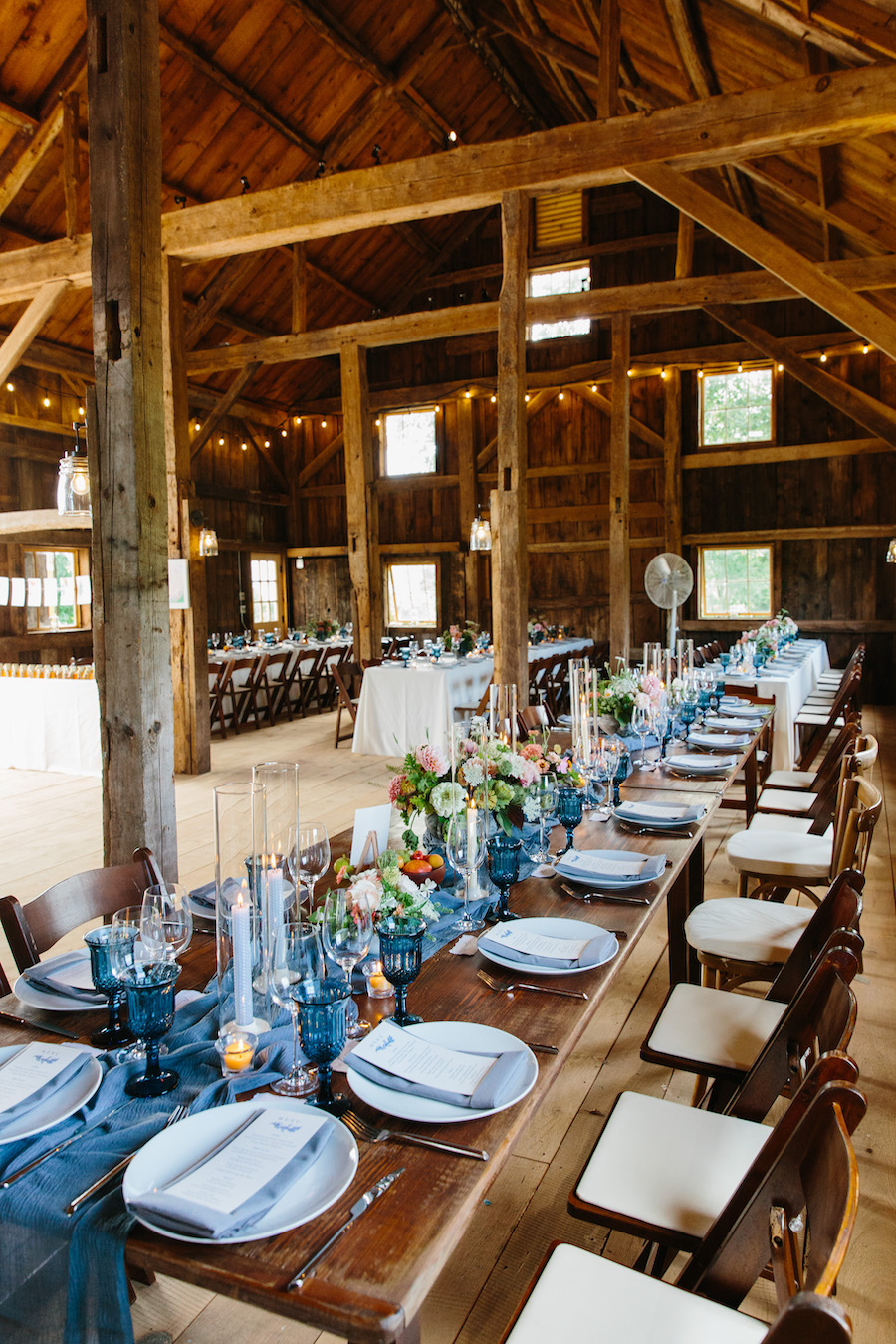 Rebekah and Josh topped the wood farm tables at their reception with lively arrangements potted in pewter vessels, along with silver cutlery, stoneware plates, tapered candles in shades of blue and cream, and a runner from Silk & Willow. 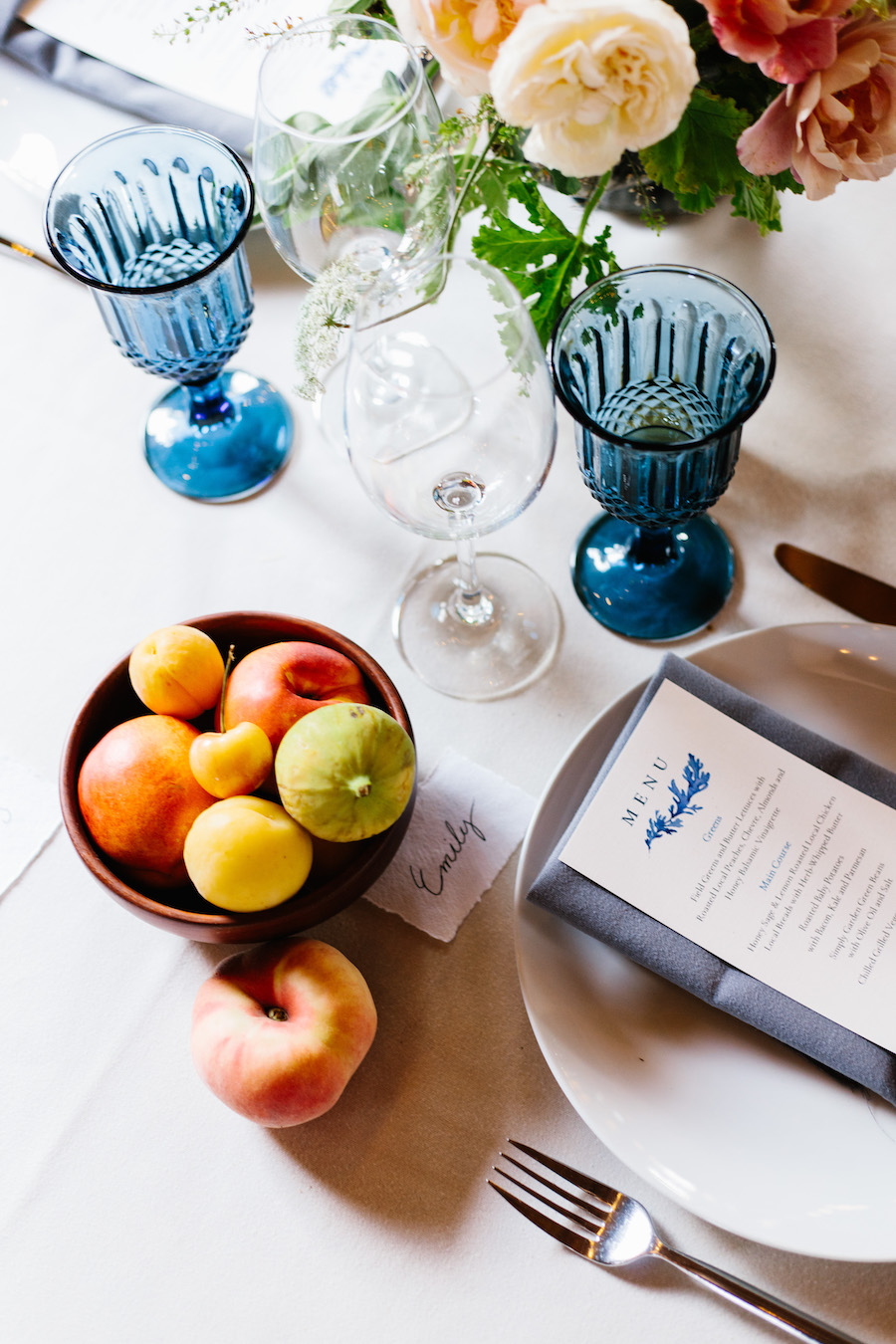 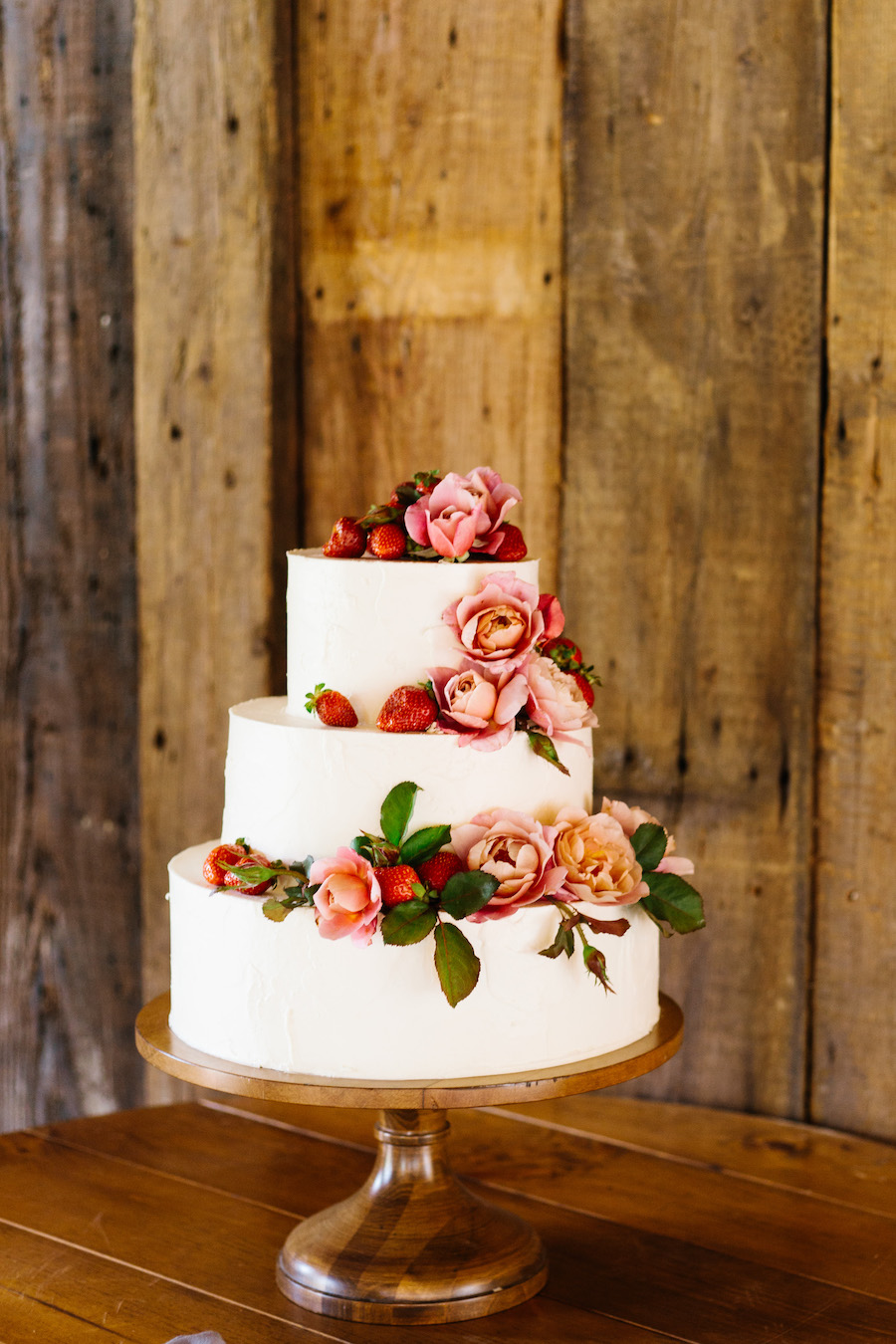 The couple’s wedding cake featured two flavors: lemon poppy seed with lemon curd and vanilla buttercream, and vanilla cake with a roasted strawberry filling and honey buttercream. “It was beyond my wildest dreams,” Rebekah says of the confection. 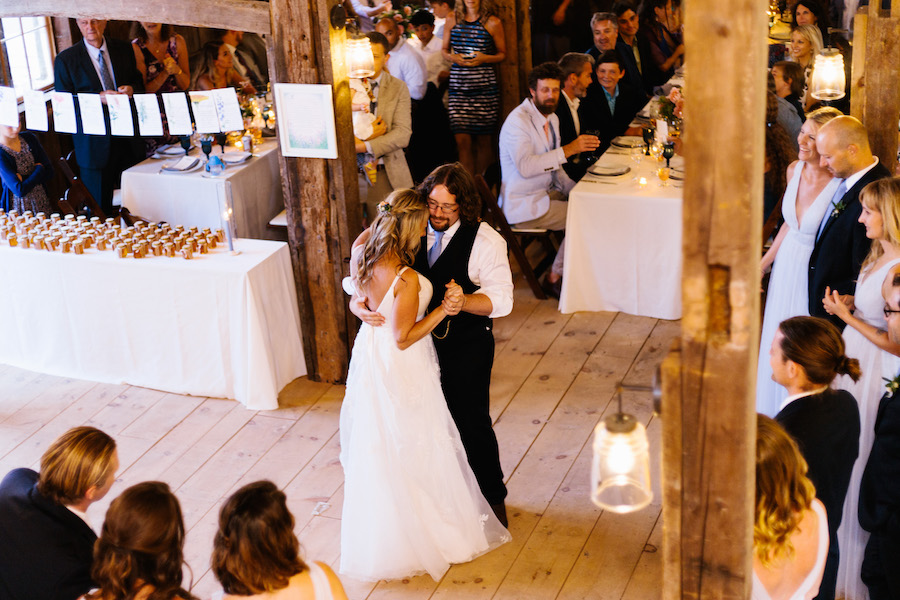 The bride and groom had their first dance to Elvis Presley’s “Can’t Help Falling in Love,” which Rebekah says was the only option they seriously considered. “I always thought I’d dance to that song with my dad,” she says. “My dad passed away in 2015, but I always imagined that I’d be dancing to that song on my wedding day. I just felt like I had to.”