At the Edge in Maine, This Couple Threw the Sweetest Summer Wedding
Subscribe
Follow
I'm a scraper
This search result is here to prevent scraping

Their daughters were their flower girls and their son was the groom's best man. 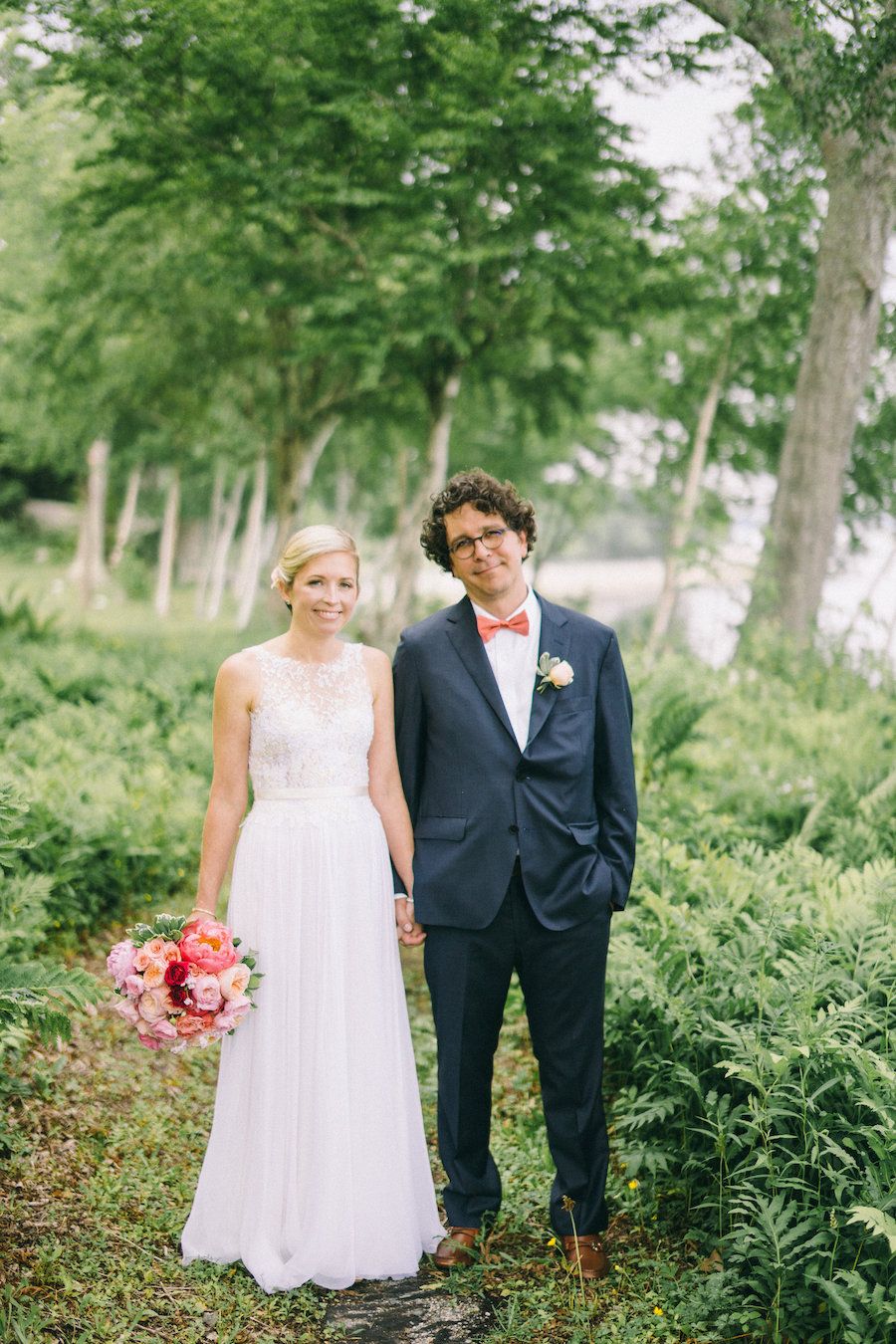 Catie Swift and Jon Burbage first met as students at a South Carolina junior high school in 1993. They remained friends throughout high school, but in college went their separate ways. Then in 2018, almost two decades later, Catie, who still lived in South Carolina, was heading to Park City, Utah, for a ski trip. Though she’d only spoken with Jon two or three times over the years, she remembered that he lived in Salt Lake City and reached out to ask if he’d be interested in catching up. He was. When they met for dinner, they instantly reconnected. After that, they began talking on the phone a few times a week, and then soon every day. During those calls they began to discuss the prospect of dating, and after six months, Jon decided to come visit her. “That was kind of when things were more romantic,” Catie recalls. Jon soon began visiting more regularly, and eventually, as things became serious, he started to fly out every month.

In December, Jon was in town visiting Catie, and early one evening asked if she wanted to go for a walk on the beach near her home. She agreed, so they set out. They strolled along the shoreline until they arrived at one of their favorite parts of the beach, where Jon stopped her. “He got down on one knee and asked if I would marry him,” Catie says. They’d talked about the possibility of getting married before, yet Catie was still totally surprised, she says. “I did think maybe something [was coming] but I just wasn’t sure,” she adds.

Since it would be a second marriage for them both, Jon and Catie agreed that having their families, especially their children, be part of their big day was most important. “We just wanted to have a small, intimate but elegant wedding,” the bride says. As for the location? They zeroed in on the Gulf of Maine, where they’d vacationed in Rockport and Camden while they were dating. And as luck would have it, the sister of Catie’s college roommate, Kristen Winters of Beehive Creative Events, was a local wedding planner there. Since the two wouldn’t be able to venture north to tour venues ahead of their wedding, they left it to Winters to find the perfect place. Their only requirement: The property had to have views of Penobscot Bay. “We trusted her and it was a good decision,” Catie says. With their planner’s help, they chose the Edge, a waterfront venue five miles north of Camden. By the end of the big day, everything had gone seamlessly, Catie says. “We were just happy end excited to have family there, to be enjoying our lives together, and to have these happy memories to look back at,” she adds. 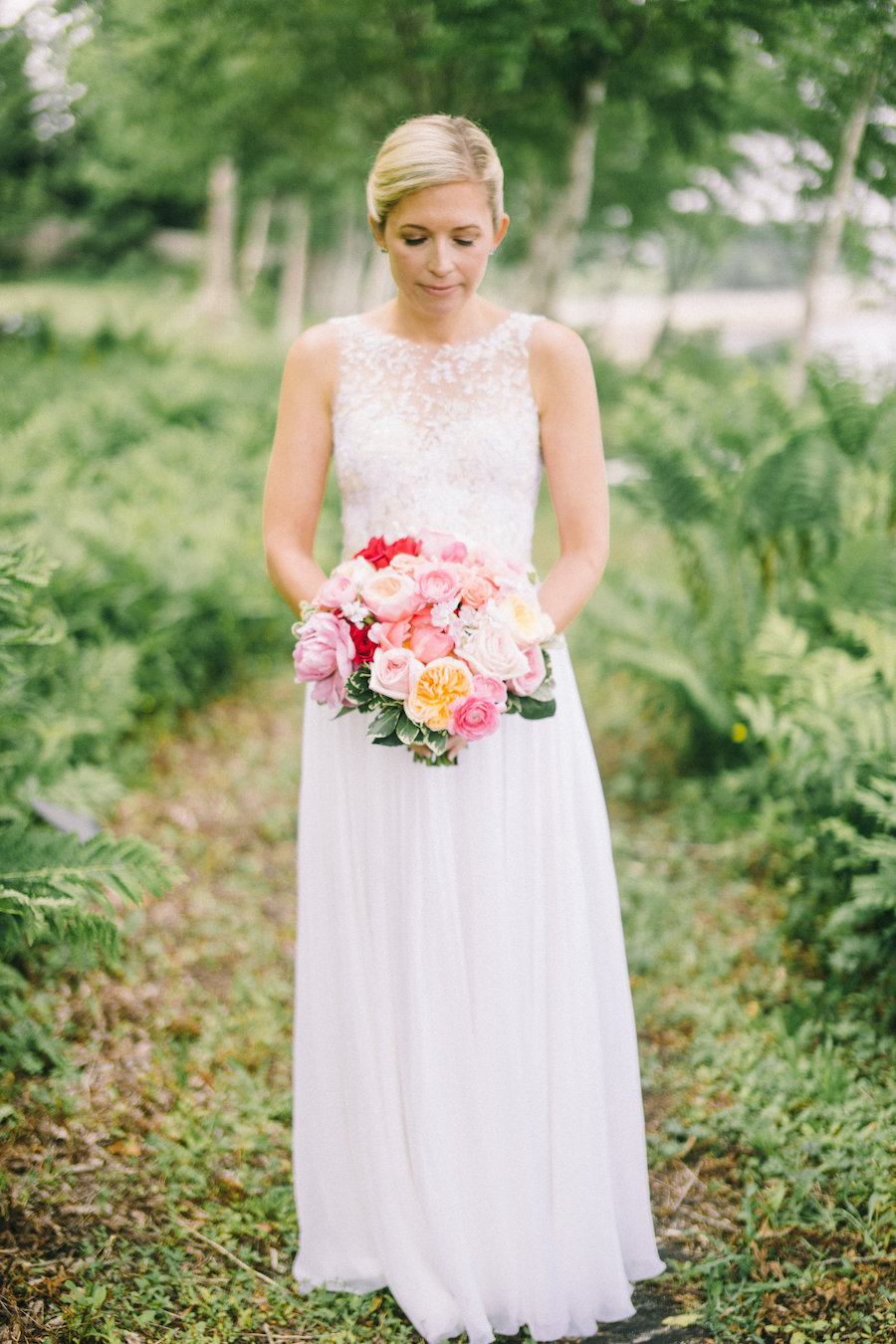 “I wanted it to be very colorful, with pinks and corals,” Catie says of her bouquet, which included garden roses, anemone, ranunculus, spray roses, and peonies—the bride’s favorite flower. 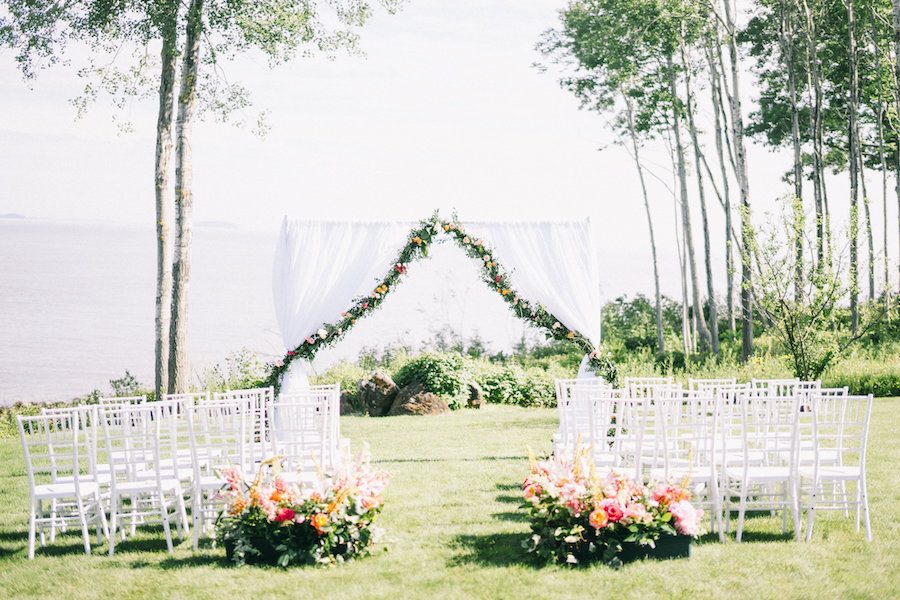 At an oceanfront ceremony, 30 guests faced an altar boasting drapery and a garland of greenery with peach, orange, and pink spray roses. 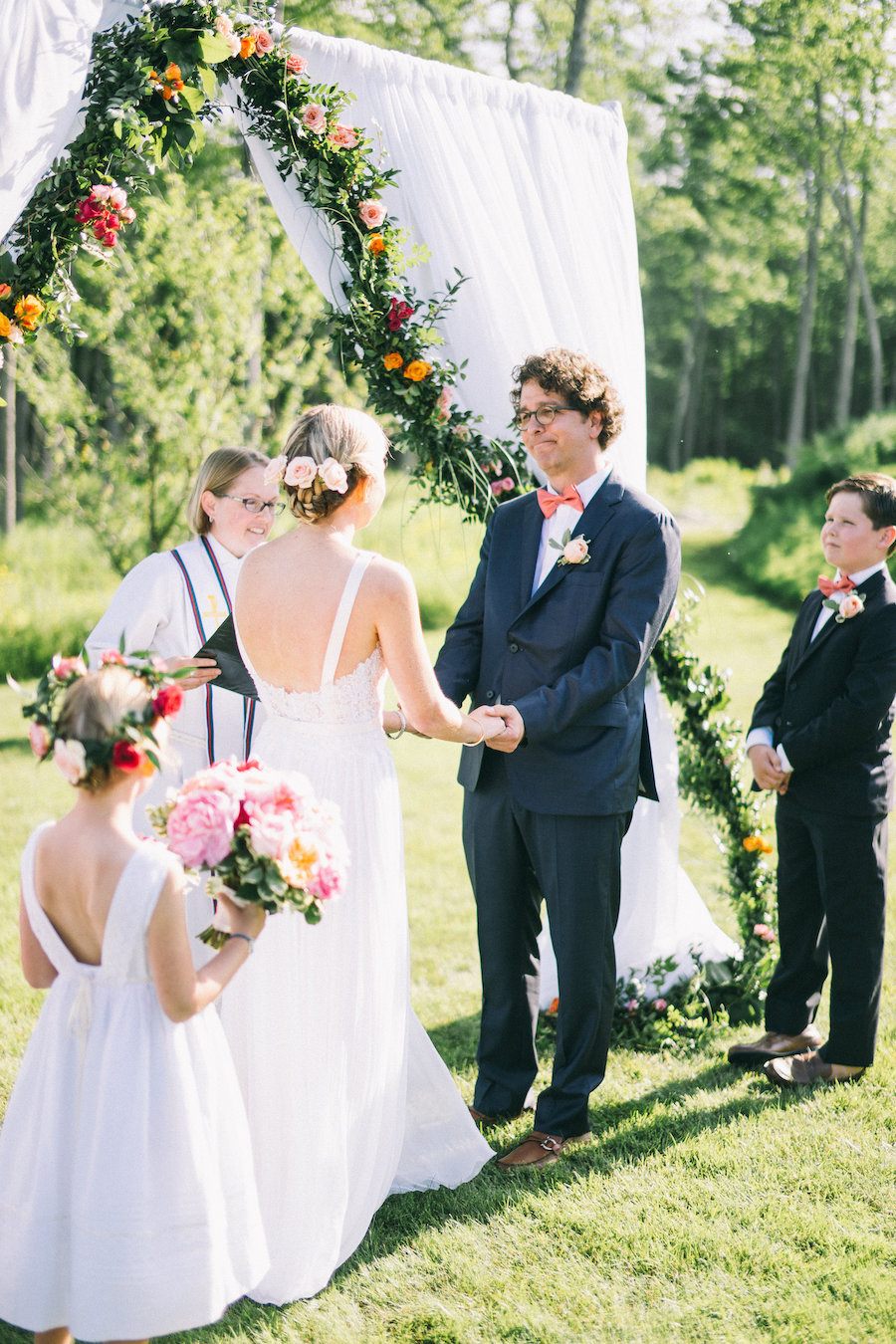 The couple’s daughters served as flower girls, donning crowns of ruscus and spray roses, while their son took on the role of Jon’s best man. 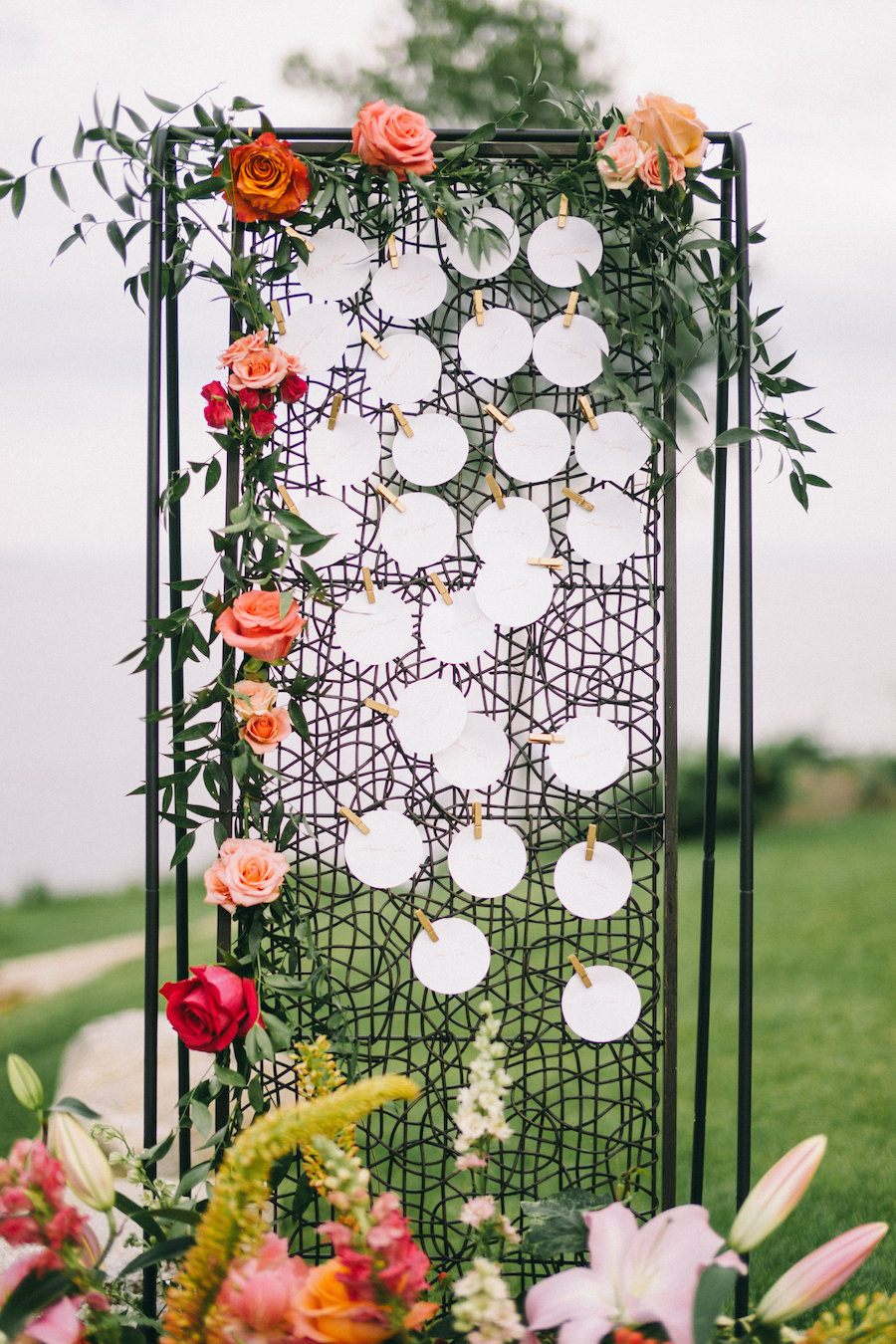 Catie and Jon pinned guests’ escort cards to a wire lattice display using petite clothespins. “I thought it all flowed very well with the rest of the wedding,” Catie says of the design. 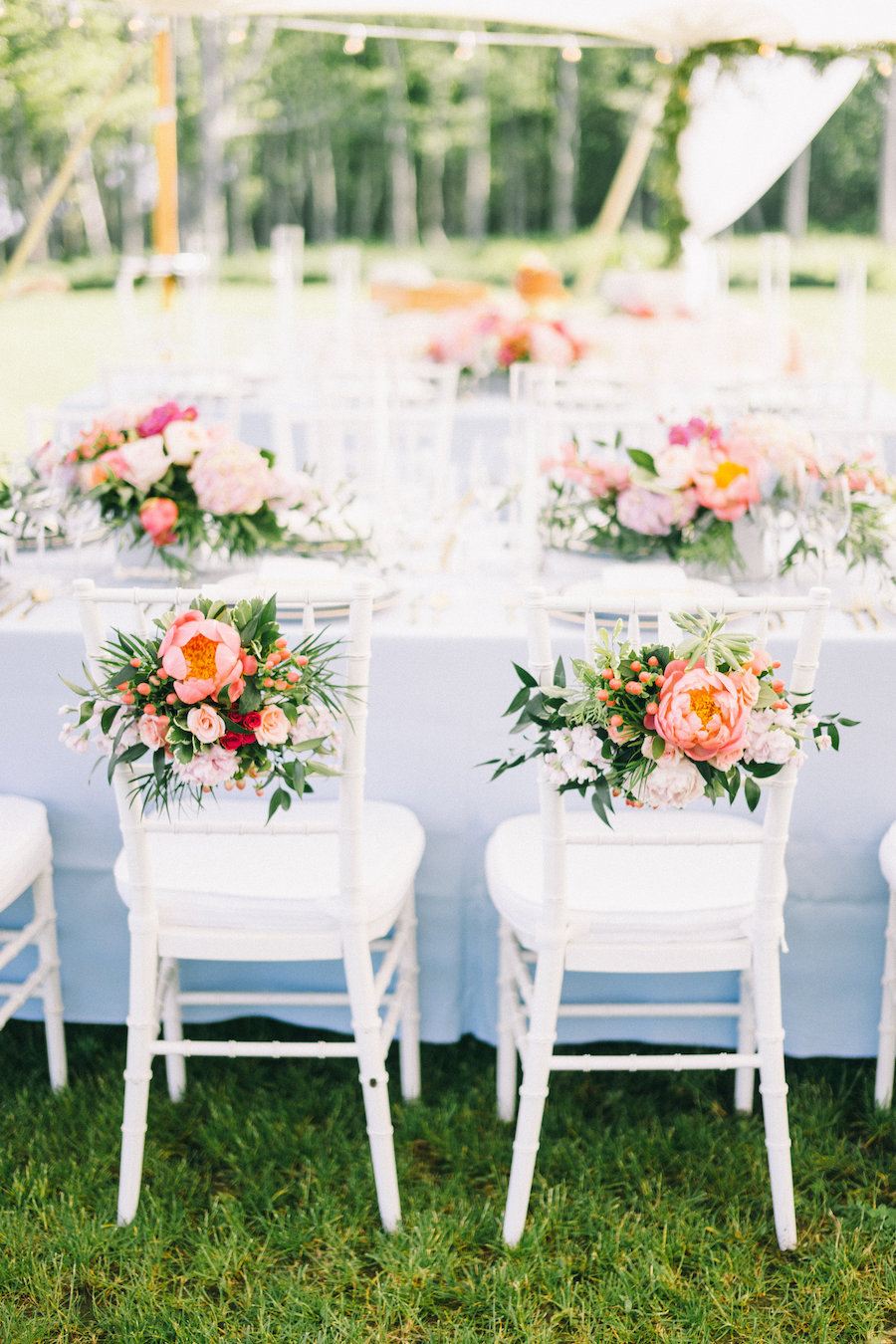 For their tented reception, the lovebirds topped all four tables with centerpieces featuring the same flowers from Catie’s bouquet, as well as pink hydrangea and hypercium berries. Their florist also adorned the backs of the couple’s chairs with bunches of blooms. “We didn’t know we would have that on our chairs, but it was such a nice detail,” Catie says. 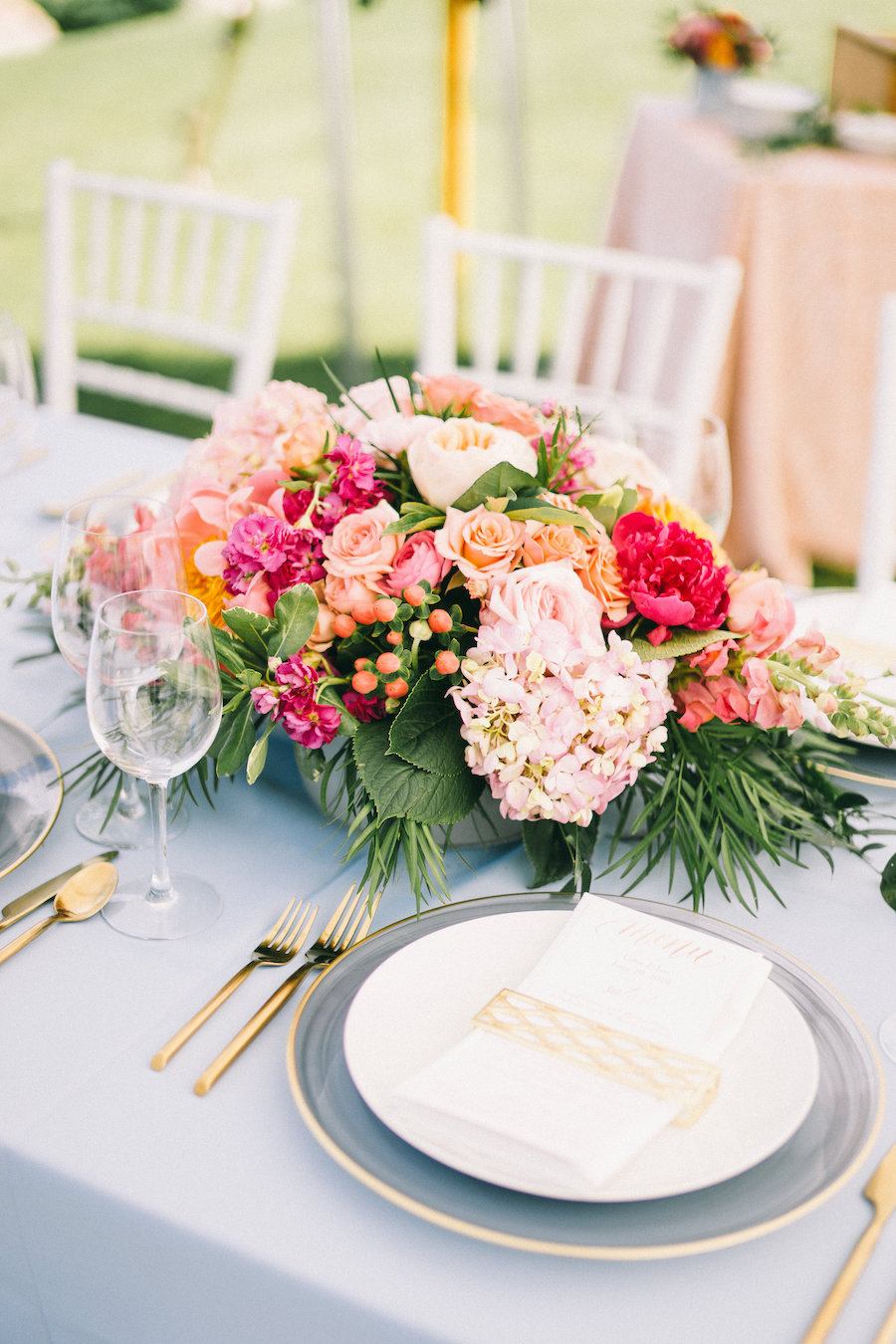 The bride and groom wanted their reception tent to feel like a family dinner, Catie says. Therefore, their dinner was served family-style at tables decorated with light blue linens (to complement the seaside surroundings) and accented with gold flatware. 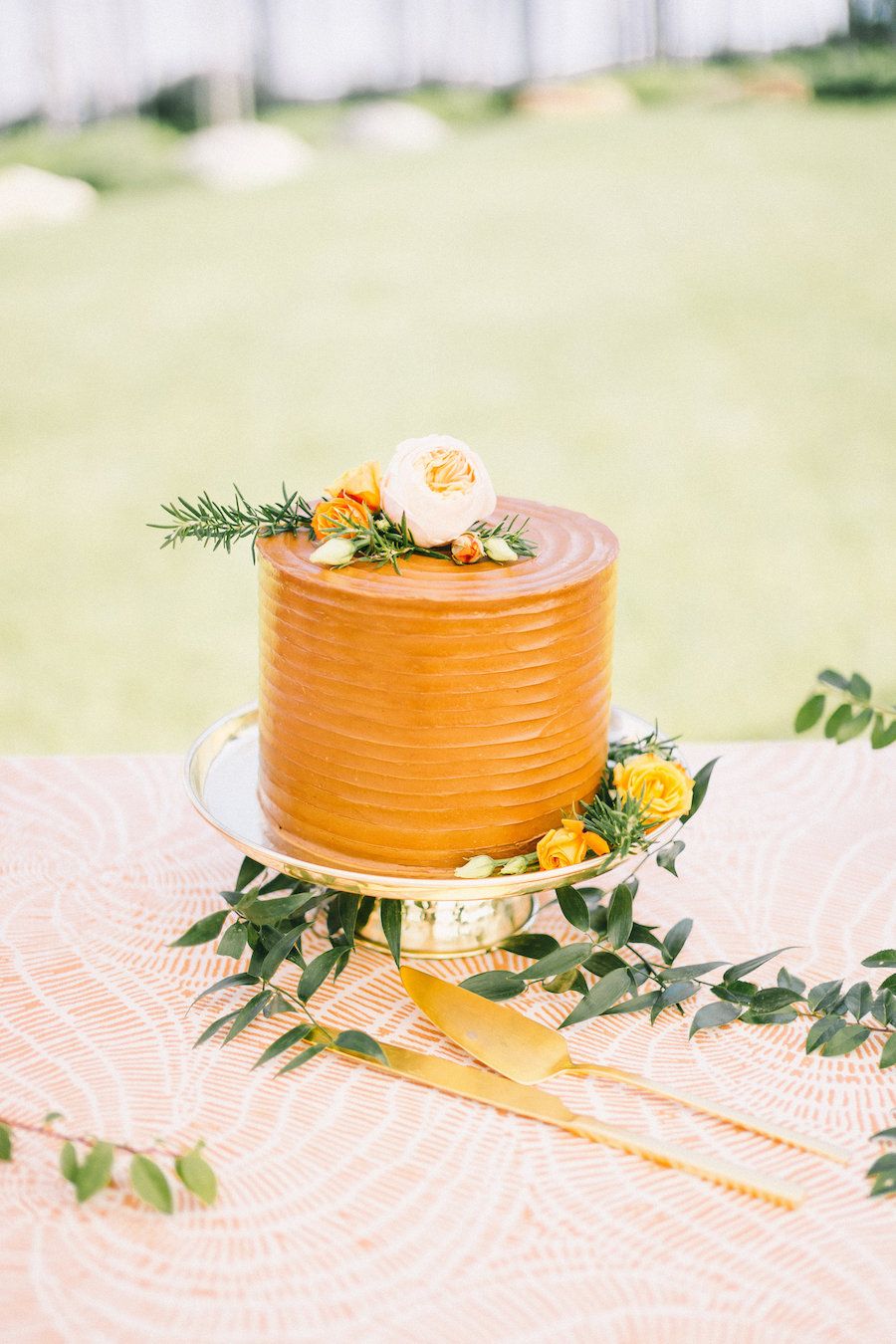 Catie and Jon cut into a small chocolate wedding cake with raspberry filling, baked by Trillium Caterers. “Chocolate is just my favorite,” the bride says. 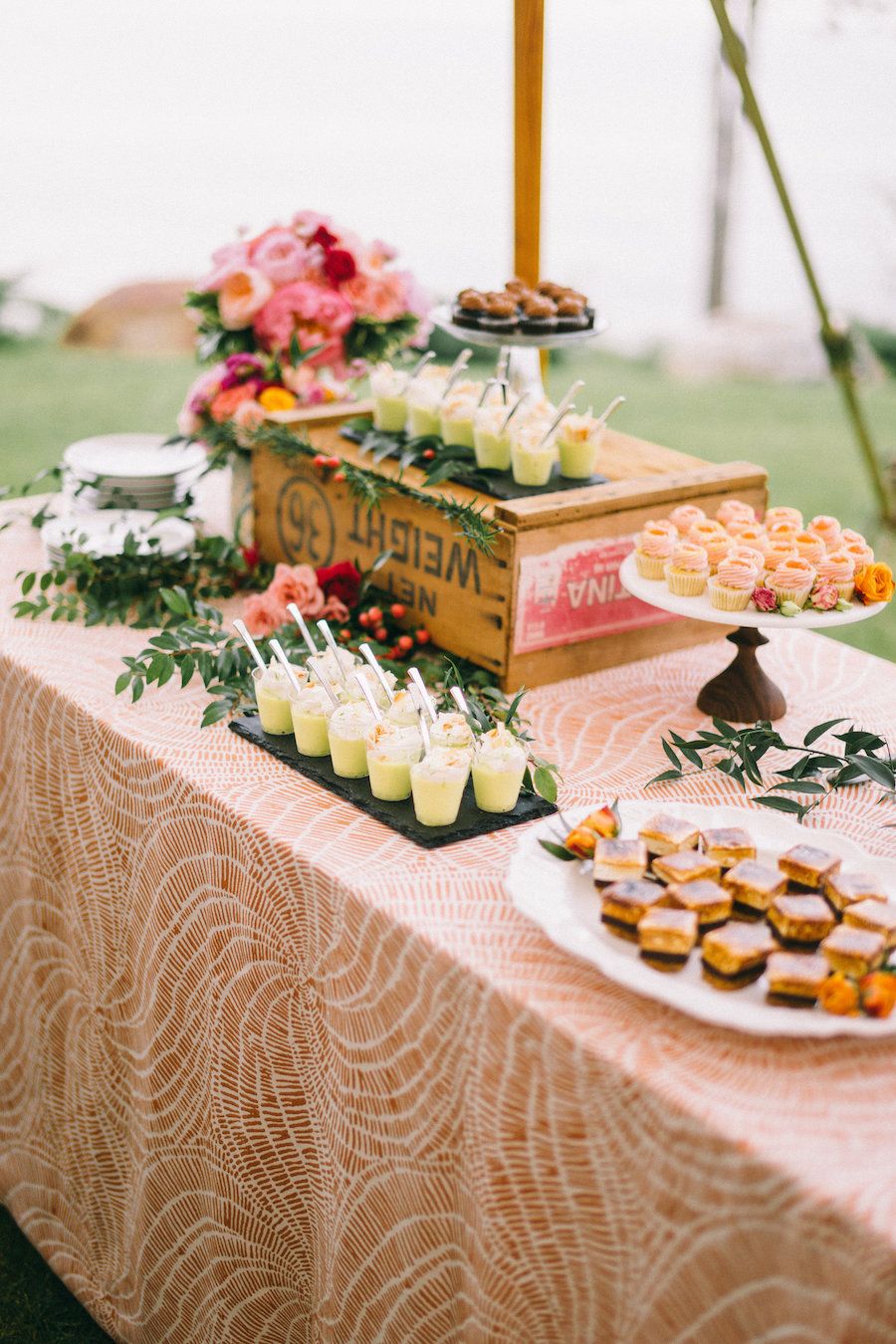 The duo also provided guests a dessert table with treats such as grapefruit cupcakes (a favorite flavor of the groom), key-lime custard cups, s’mores bars, and more. 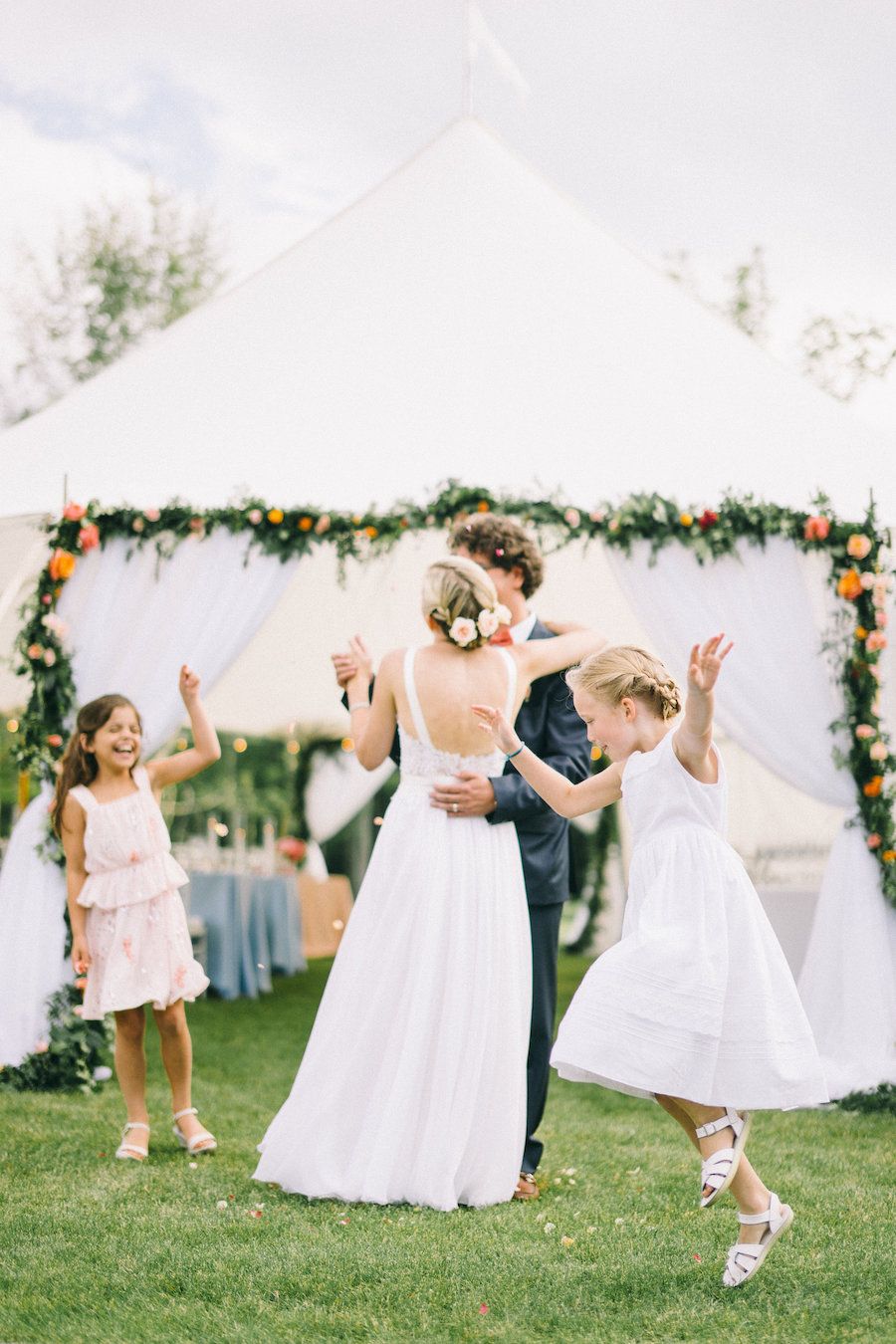 While the couple’s reception didn’t feature dancing, Catie and Jon did have one dance, to Phish’s “Waste,” played by a string quartet. Jon chose the song for the first dance, which their children also joined in for. 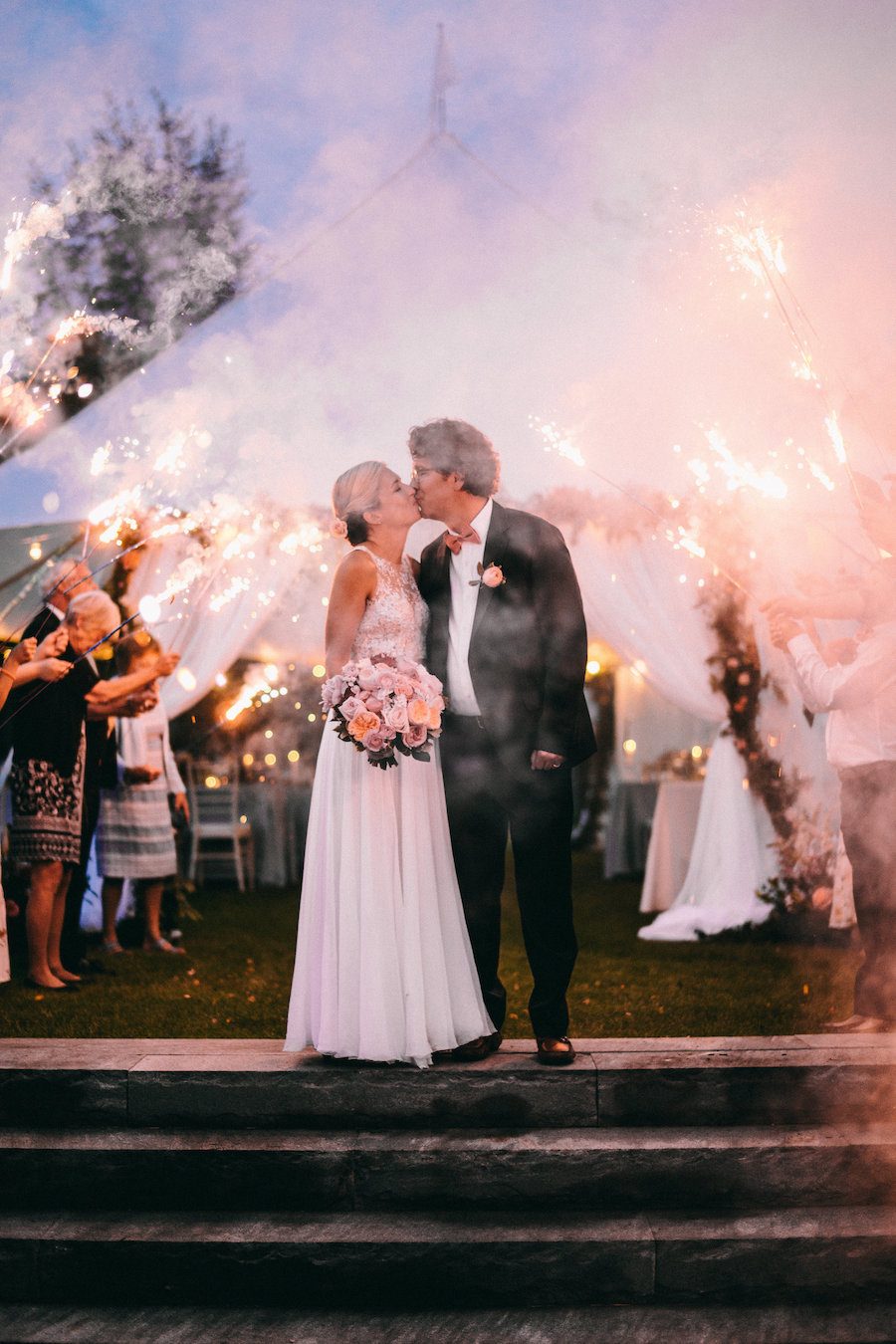 “I thought it was a really great way to cap off the evening,” Catie says of the couple’s sparkler send-off. “And our kids all love fireworks, so they adored it, too.”