The wedding also featured nods to the bride's Chinese culture. 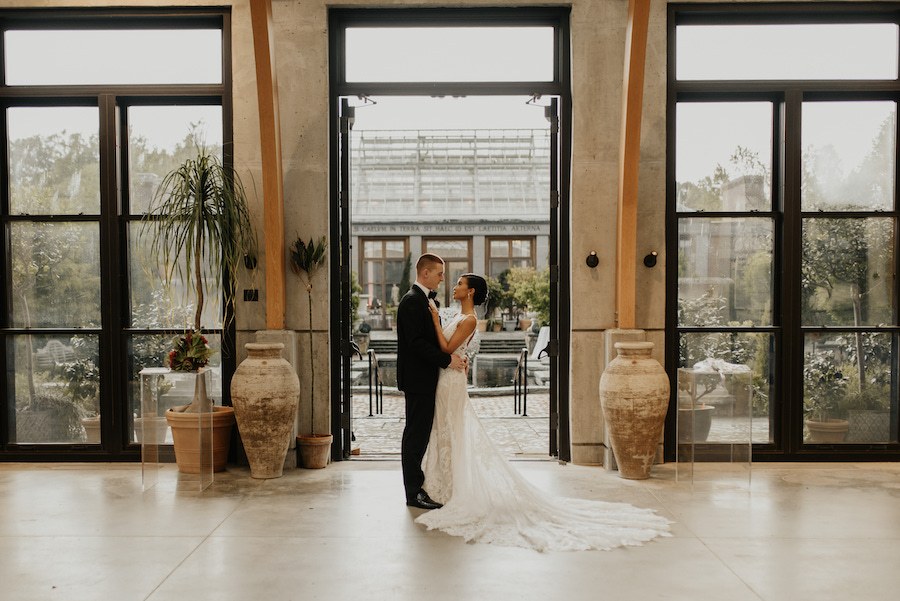 The first time Evan Hogan asked for Carleen Le’s phone number, she turned him down. It was 2012 and they were both employees at a Nissan franchise south of Boston. He was attracted to her ambition and kindness, but Carleen wasn’t immediately interested. “Sometimes you’re just in your own space, and you’re like, ‘Thank you, but no,'” she explains. Still, Evan continued to be “nice and polite,” he says, adding, “I wasn’t too pushy.” Eventually, after they continued to get to know each other, Carleen agreed to go out to dinner and a movie. Evan drove her home afterward, and they had their first kiss in her driveway. “He was just the sweetest peach,” Carleen says. “He is genuinely one of the nicest and funniest people I’ve ever met.” Their relationship progressed swiftly from there: Friends and family were enthusiastic supporters of their relationship, and it didn’t take long for the two to move in together later that same year.

In 2017, Evan bought a ring. Then, for two months, he eagerly waited for the right moment to pop the question. One September night, when he knew Carleen had had a long day at work, he decided to have dinner ready for her when she returned home. Carleen breezed in and started moving around the kitchen, eating and recapping her day. “He was asking me really weird questions and I remember thinking, ‘Why is he being so weird? I’m trying to tell him about work,'” Carleen recalls. She was standing up and had just taken a bite of food when she turned around to find that Evan had gotten down on one knee. “I thought, ‘Oh my god, this is not happening. It was the best,” she recalls. “I was so lost in his eyes as he was talking, and I didn’t really know what he was saying. I was just looking at him and said, ‘Absolutely.'”

While wedding planning, the couple first saw their future venue, Tower Hill Botanic Garden, in winter. Although frost covered the normally flower-laden grounds, they immediately recognized the venue’s allure. It was the only location they’d seen, but they decided to put down a deposit that day. For their nuptials, they chose to keep the décor relatively simple to let the natural beauty of the garden shine, while also playing up what Carleen calls a “romantic, sultry” feel with dark red florals and abundant greenery. In the end, though, their big day was all about “celebrating each other before our loved ones,” the bride says. “We just laughed and danced the whole time. It was perfect.” 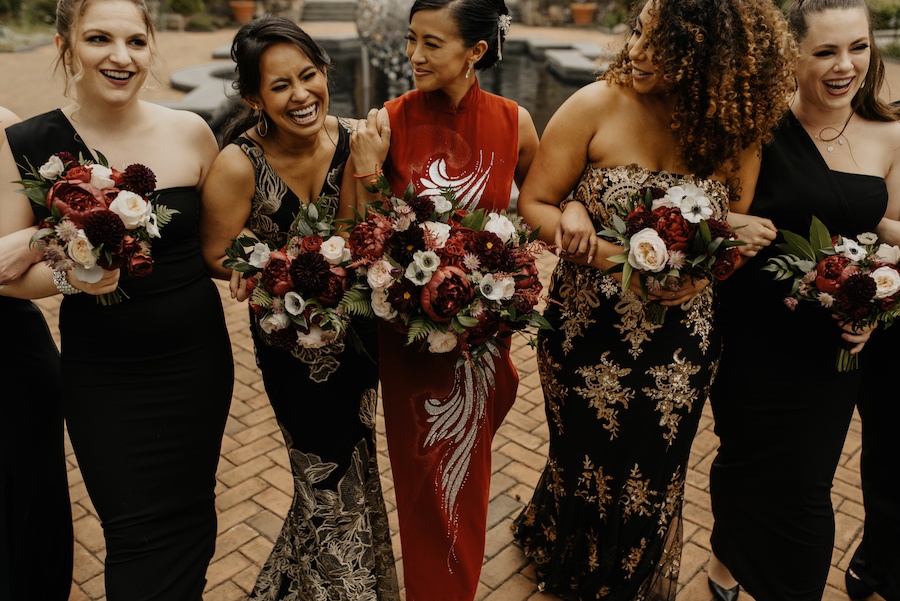 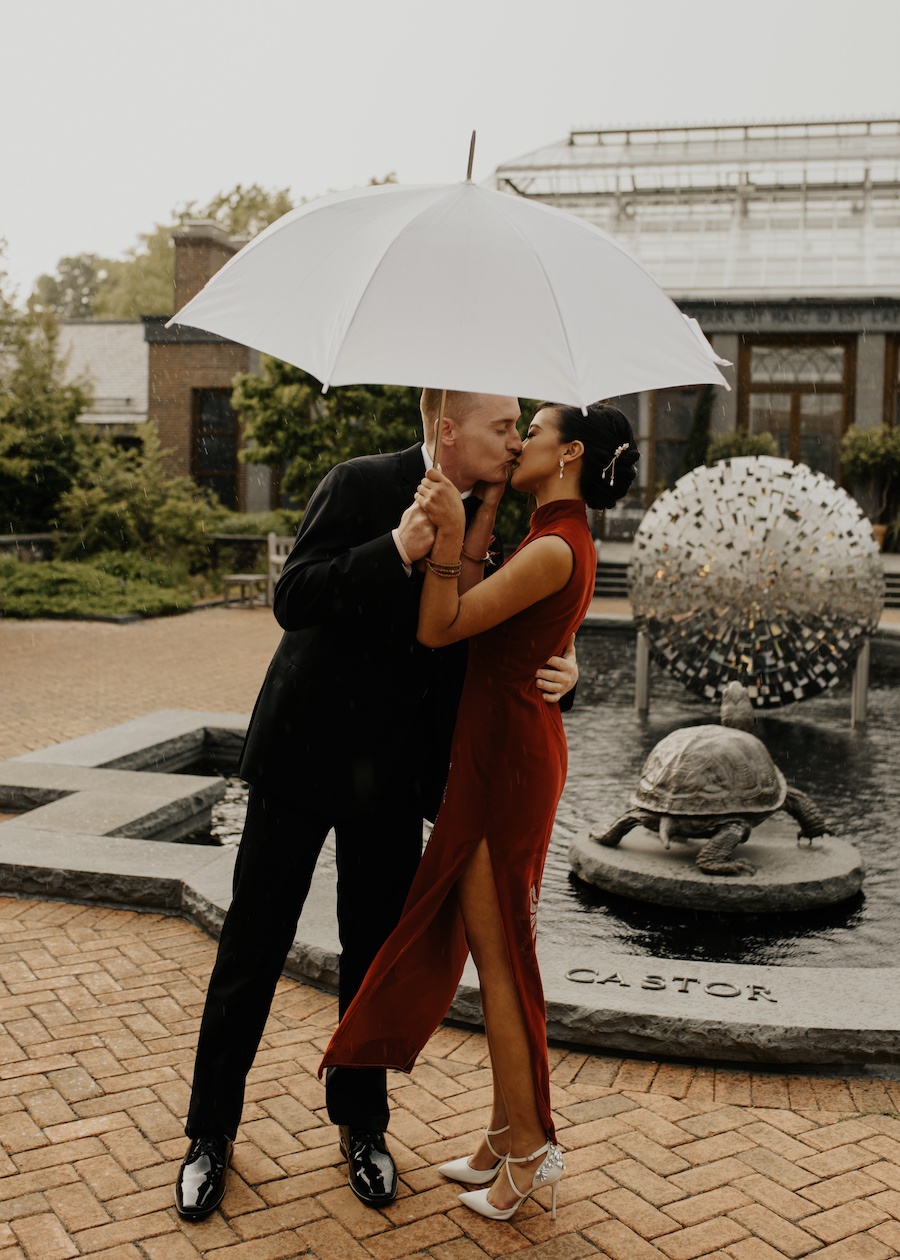 Carleen and Evan had their first look outside just as it began to rain. “She came underneath the umbrella with me, and it was really nice,” the groom says. For the beginning of the couple’s day, Carleen donned a dress that her aunt’s mother made for her own daughter’s wedding 25 years ago. 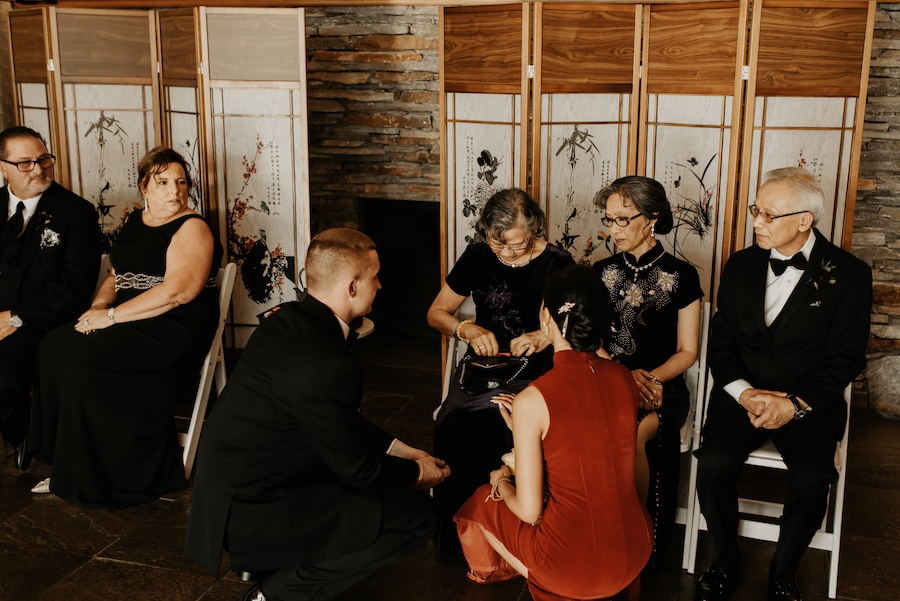 Before swapping vows, the couple held a tea ceremony: a traditional event at Chinese weddings in which the bride and groom show gratitude and respect for their parents and elders by presenting them with tea. “You thank them for how you’ve been raised and the person you’ve become, and thank them for their everlasting love before you embark on a new journey in your life,” Carleen says. 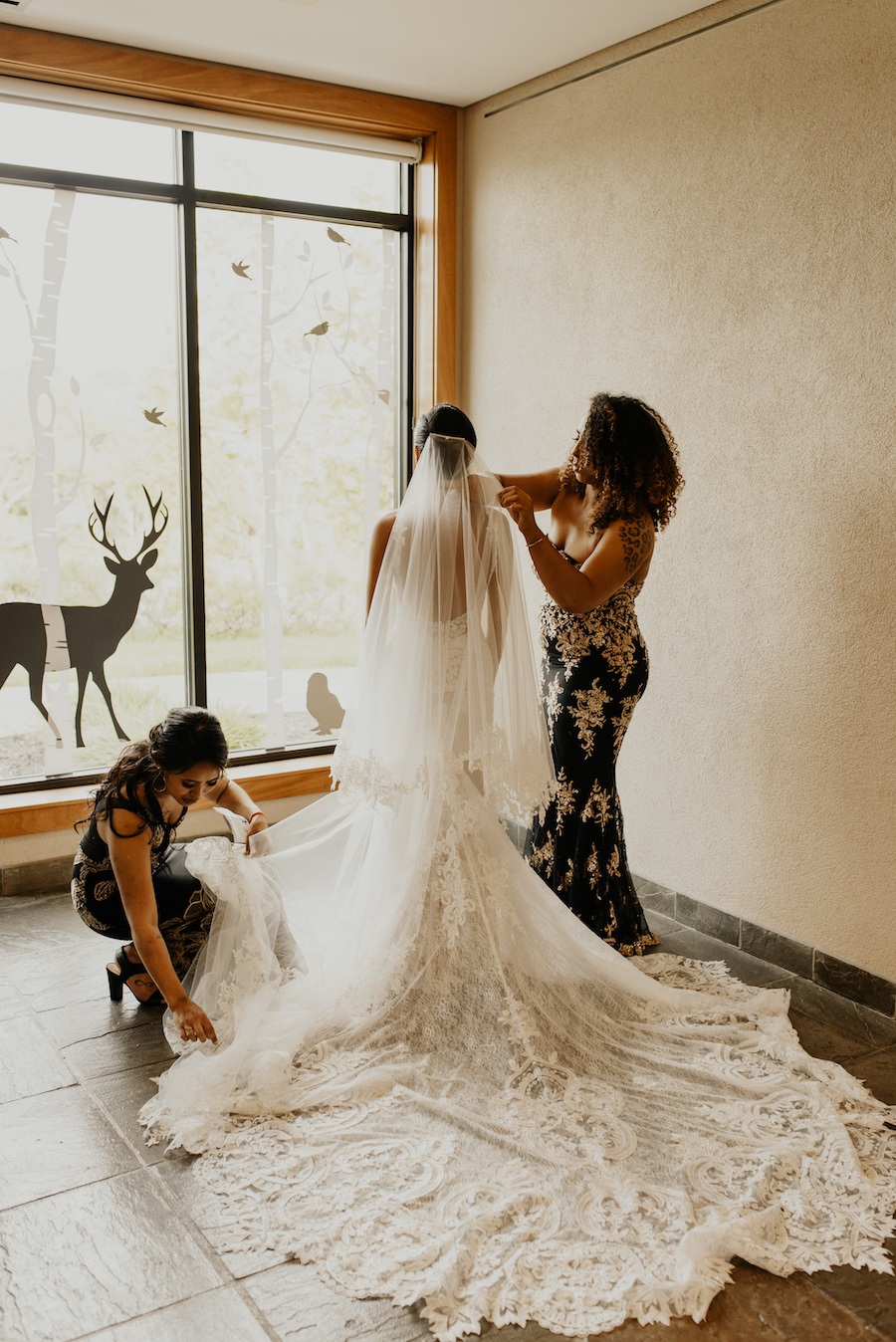 Carleen was running errands with a friend for another friend’s wedding when they drove past Vows Bridal, in Watertown. Her friend suggested they stop in so Carleen could try on dresses to wear at her own nuptials. “I put on four dresses and picked mine out, and that was it,” the bride says. “I loved that the dress was very intricate, but in a subtle way, and had a romantic feel to it.” 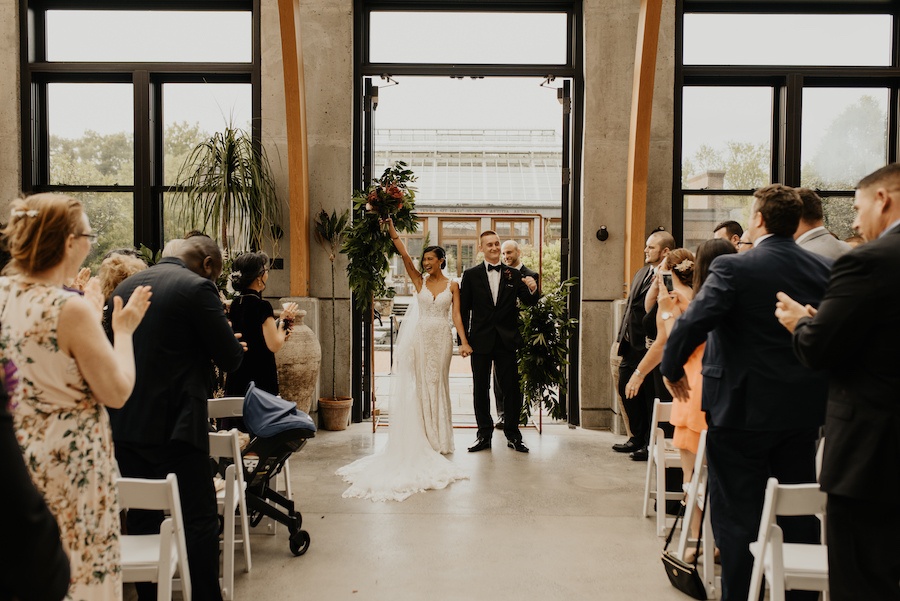 The couple chose to move their ceremony—officiated by their friend Will, whose wedding Evan had presided over a few months prior—inside due to the rainy forecast. “In all honesty, the inside ceremony was just as beautiful, if not more, with the lighting and the high ceilings and all the colors,” Evan says. 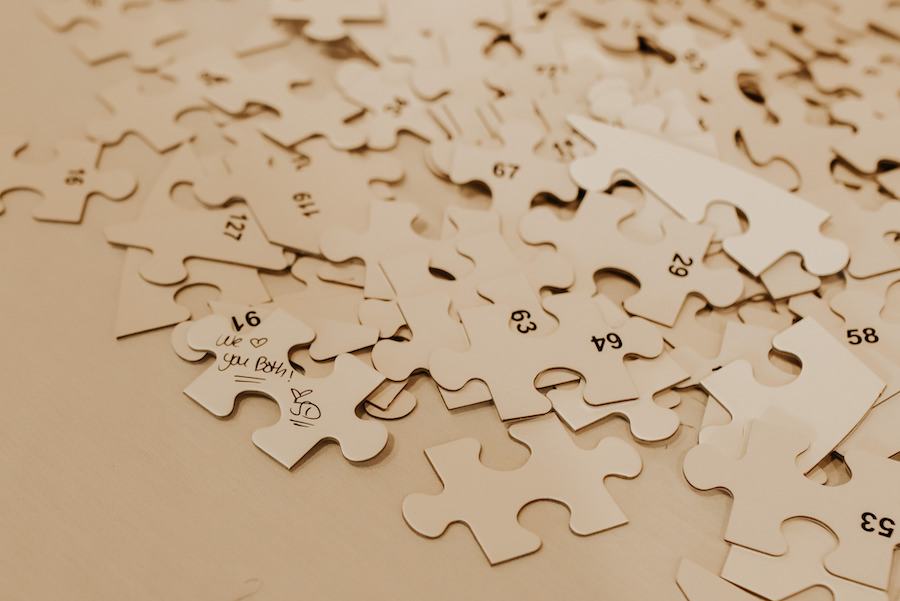 Rather than signing a traditional guestbook, friends and family left notes on puzzle pieces. Evan and Carleen plan to assemble the puzzle, which forms a heart shape, on their first wedding anniversary. 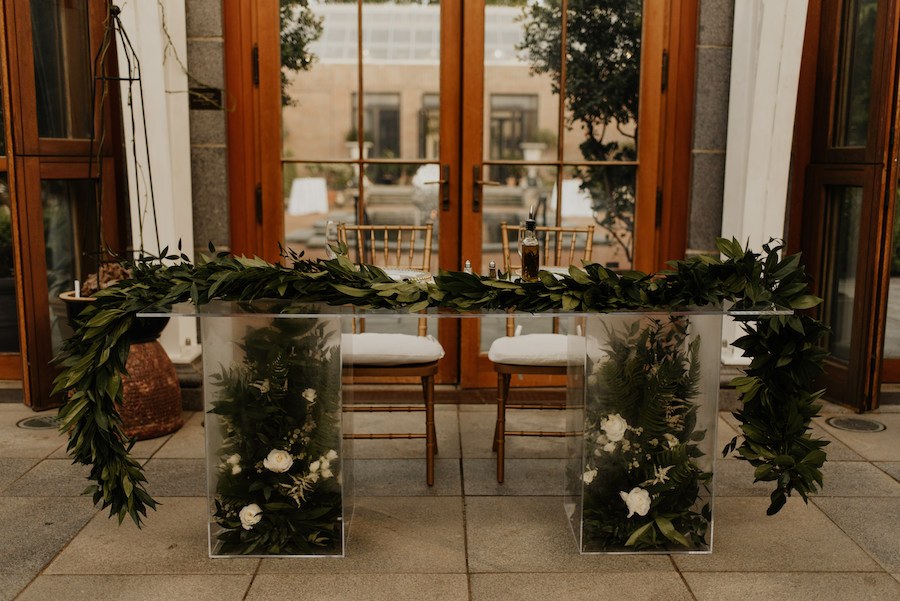 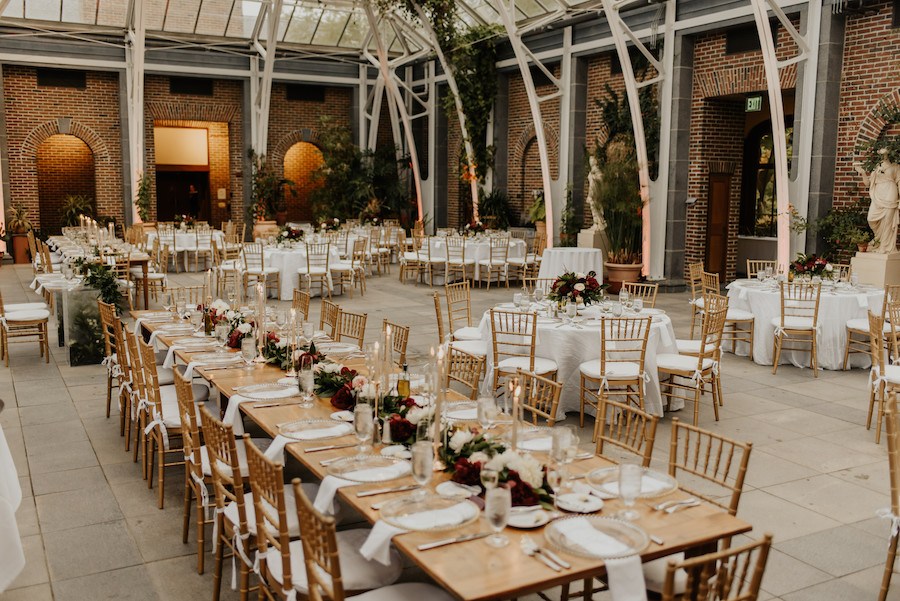 Family members sat together at two long tables, which flanked the couple’s sweetheart table. The bride and groom’s friends and other loved ones, meanwhile, sat at round tables on the perimeter. 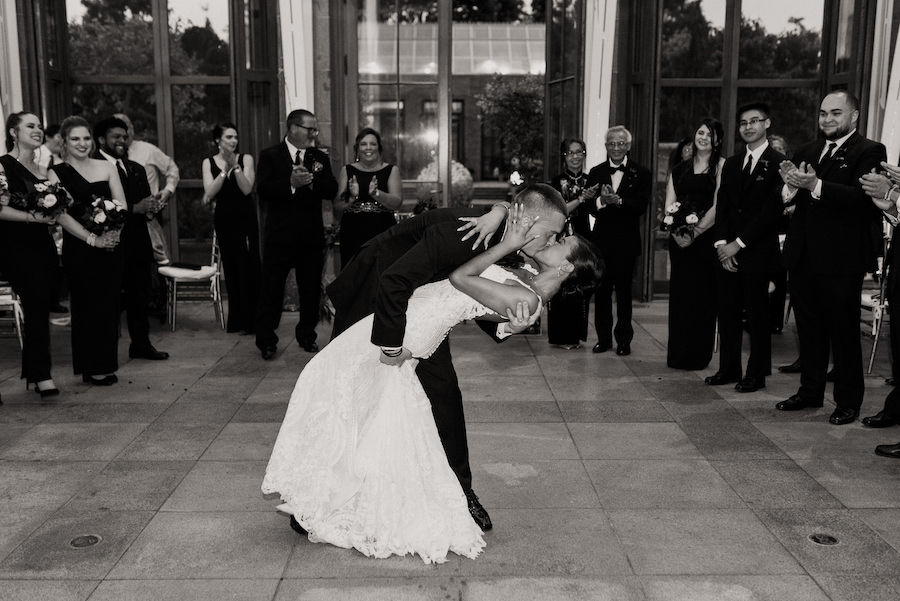 Carleen and Evan had their first dance to “Best Part” by Daniel Ceasar and HER. “I’d found the song a while back, and sometimes while driving around, we’d play the song and listen to it on repeat,” Carleen says. “Lyrically we really related to it, and it’s just one of those songs that makes you feel so good.”