We Eloped in the Seaport during the Coronavirus Outbreak

How one out-of-town pair made the best of an unpredictable situation. 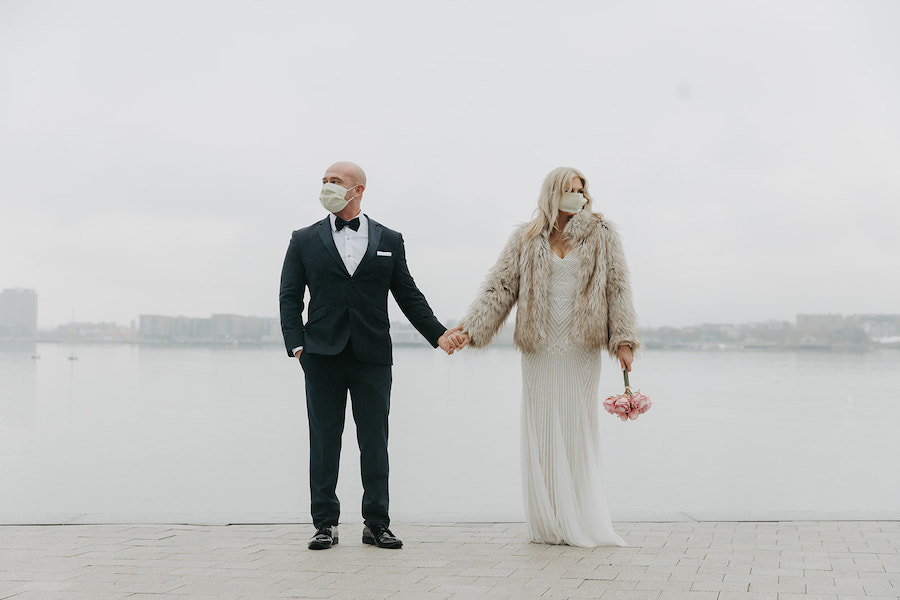 When Louisiana couple Alaina Green and Brad Woolley began planning their Boston elopement after getting engaged in July 2019, they had no idea that their wedding would take place amid a worldwide pandemic. They’d chosen Boston as their destination because they wanted to experience the excitement of the city on Saint Patrick’s Day. But when they flew north for nuptials last Friday, they were unsure exactly what would await. Still, even as the situation escalated in the city throughout the weekend, they decided to continue with their plans. On Tuesday, they wed on the Harborwalk near Fan Pier Park without friends or family by their side. After, they donned unused masks they received from their photographer Erin DeFuria, who’d obtained them from a doctor several months ago, to make a visual statement about the experience through their photos. Here, in her own words, the bride shares what it was like to tie the knot amidst the outbreak.

We were going to have a big wedding at first. Then I thought, “All these people come and the bride and groom never see each other because they’re busy saying hello and thank you.” At the end of the day it’s just about us two, so we were like, “Why don’t we just elope and then when we come back, we’ll celebrate with everybody.”

We started thinking how cool it would be if we went to Boston and did it on Saint Patrick’s Day. Afterward there would basically be a free reception, because we’d just bar hop and hang out with everyone and celebrate. It was kind of a bucket-list item—like how you go to New York City for the Macy’s Day Parade or New Orleans for Mardi Gras. We’re from Louisiana, so we party for everything.

We planned everything in eight weeks. I interviewed a few different photographers and found Erin. Later, I asked her if she had a Justice of the Peace she’d recommend, and she said, “I can get my assistant Lindsey [Williams] to officiate it with a [one-day marriage designation].” It was perfect, [like] killing two birds with one stone. 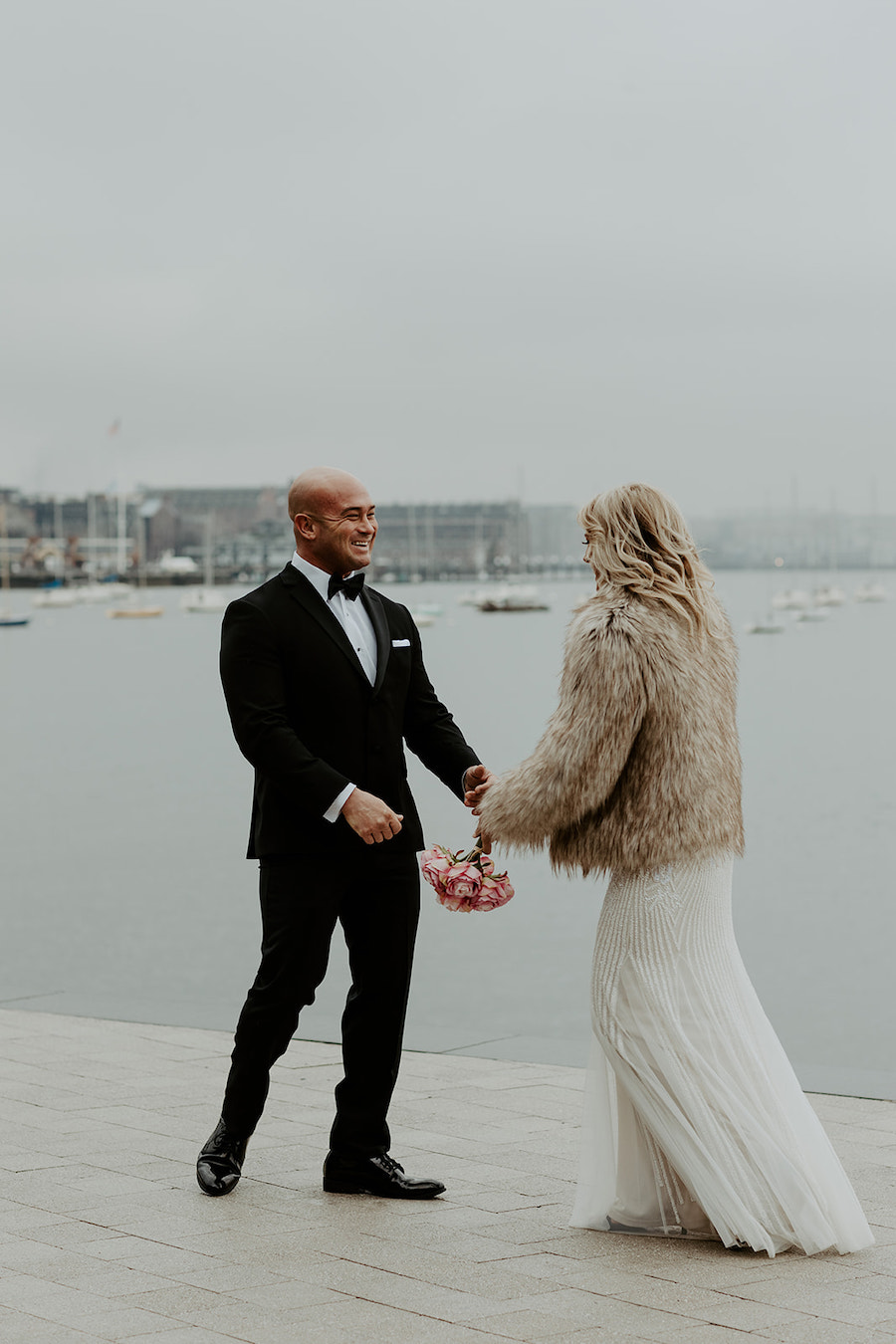 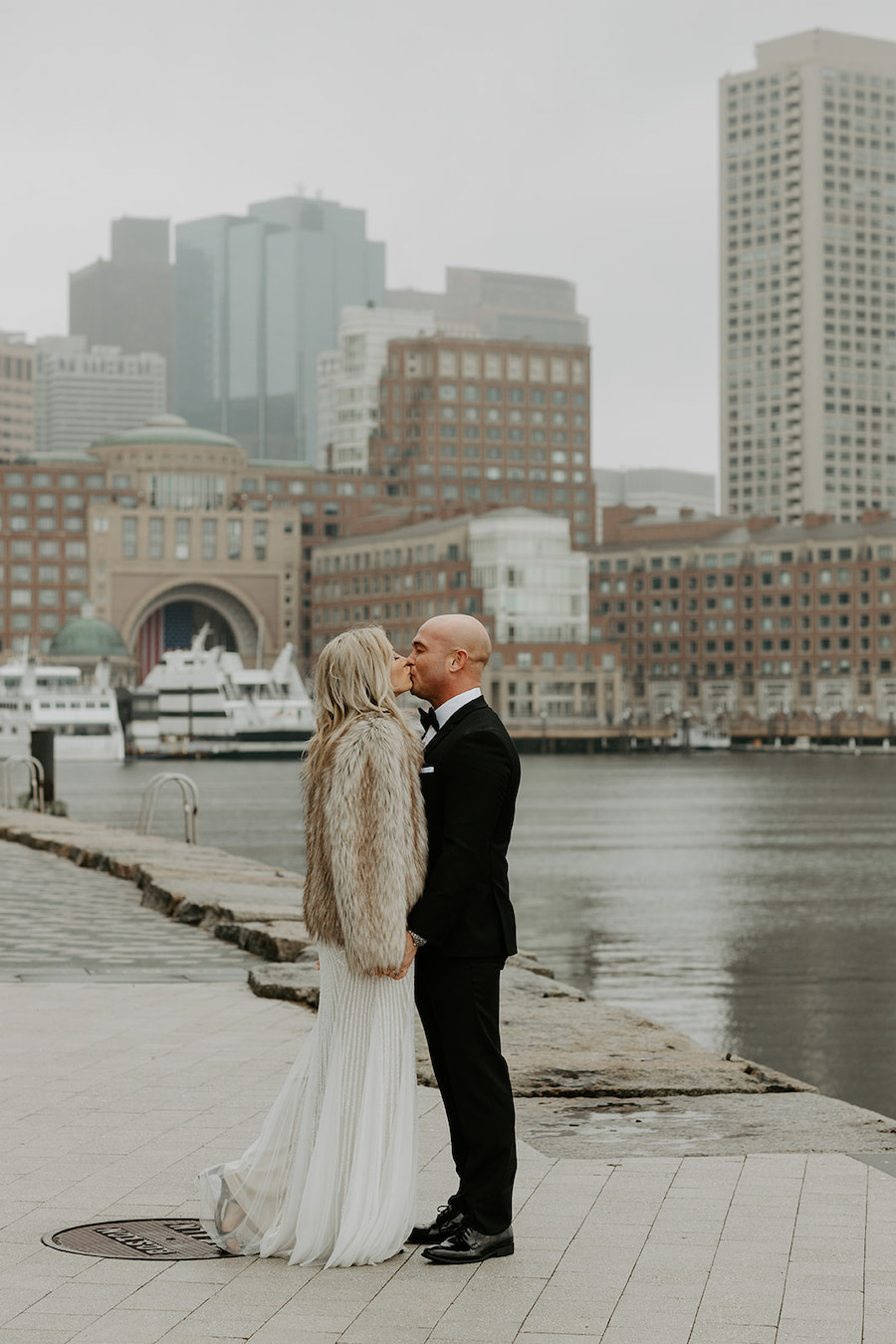 We had no [reservations] about coming. We had already booked our flights and our hotel room. This was our wedding and it was just us two. If it had been a bigger wedding that would have been one thing, but it was me and Brad eloping. When we were at the airport in Louisiana on Friday, we washed our hands and took all the regular precautions. Then when we got picked up after we landed in Boston, the airport was crazy. I guess everybody was trying to get back home. When we arrived at the hotel it was later in the evening, and nobody was really panicking. And on Saturday, everything was still kind of normal; people were out and restaurants were open. Our Uber drivers weren’t even freaking out.

Then things got worse and worse as the days went on. On Sunday, we found out they closed down Southie and all of the bars, but we thought, “Okay we still have other places to go.” But it went from zero to 100 real fast.

On Monday, the night before our wedding, I got a message from the girl who was supposed to do my hair and makeup. She said, due to everything, she couldn’t take the risk to come, and that she was so sorry. She said she had older people that live with her, and I understood. But I thought, “Oh my god, what am I going to do?” I messaged Erin to confirm we were still on, and she said we definitely were. But she said we’d just need to keep a certain amount of space between each other. 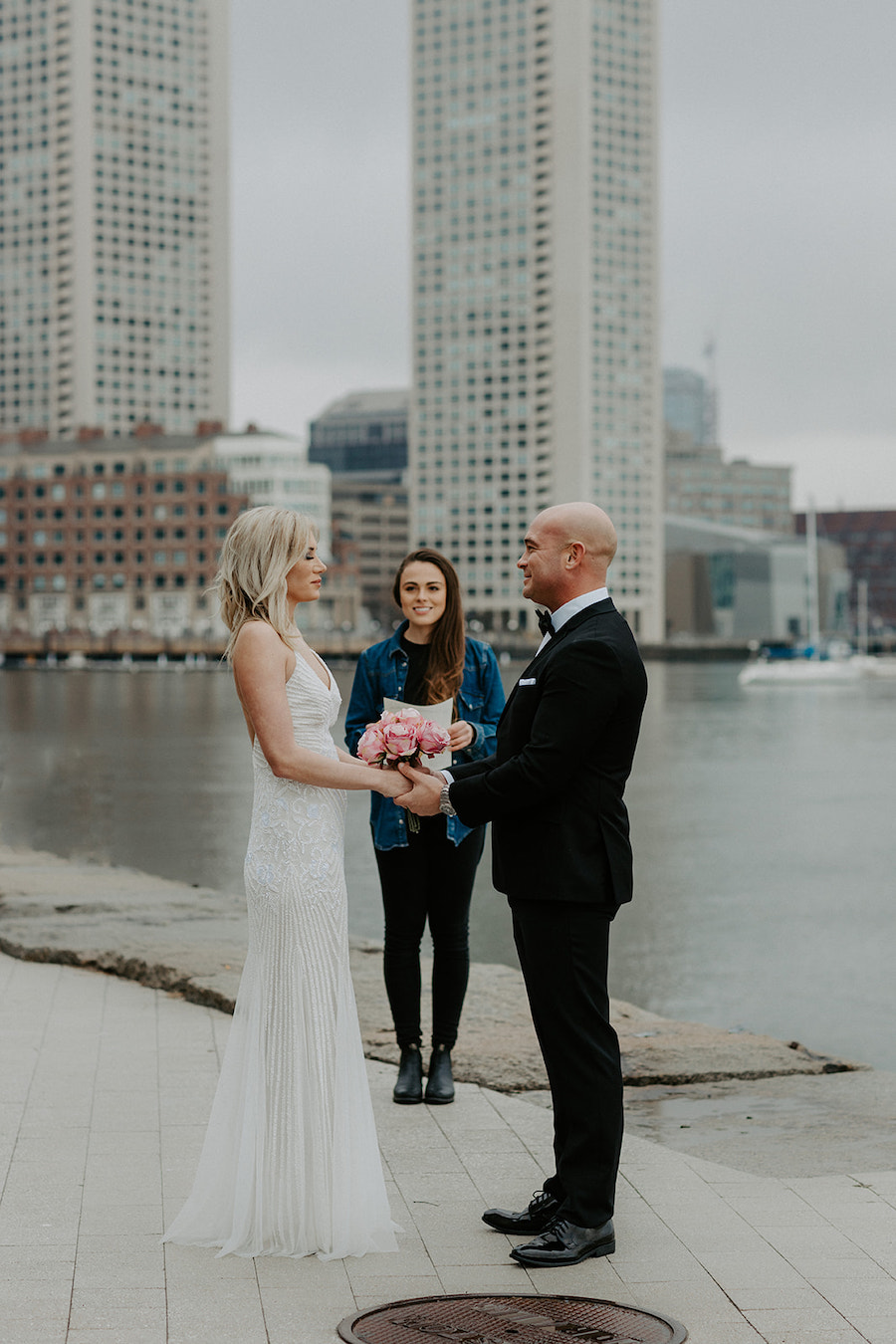 The morning of our wedding we woke up, Brad went to go pick up his rental tux, and I did my own hair and makeup. I had my curling iron with me, and I went to a store and bought fake eyelashes. We got ready together, but I made him leave a bit before me, so he didn’t see me in the whole outfit. We decided to just go to the Seaport, because so many places were closed, and Erin was worried about driving around with us.

We had a really quick ceremony. We said a few vows to each other, gave our rings, and we kissed. Then we walked around and took pictures in different spots all within a block or two. It was drizzling a little bit, but none of that even mattered. We weren’t really concerned about anything. It was our wedding and we said, “Let’s make the best of this as much as possible.” It’s kind of a surreal moment. 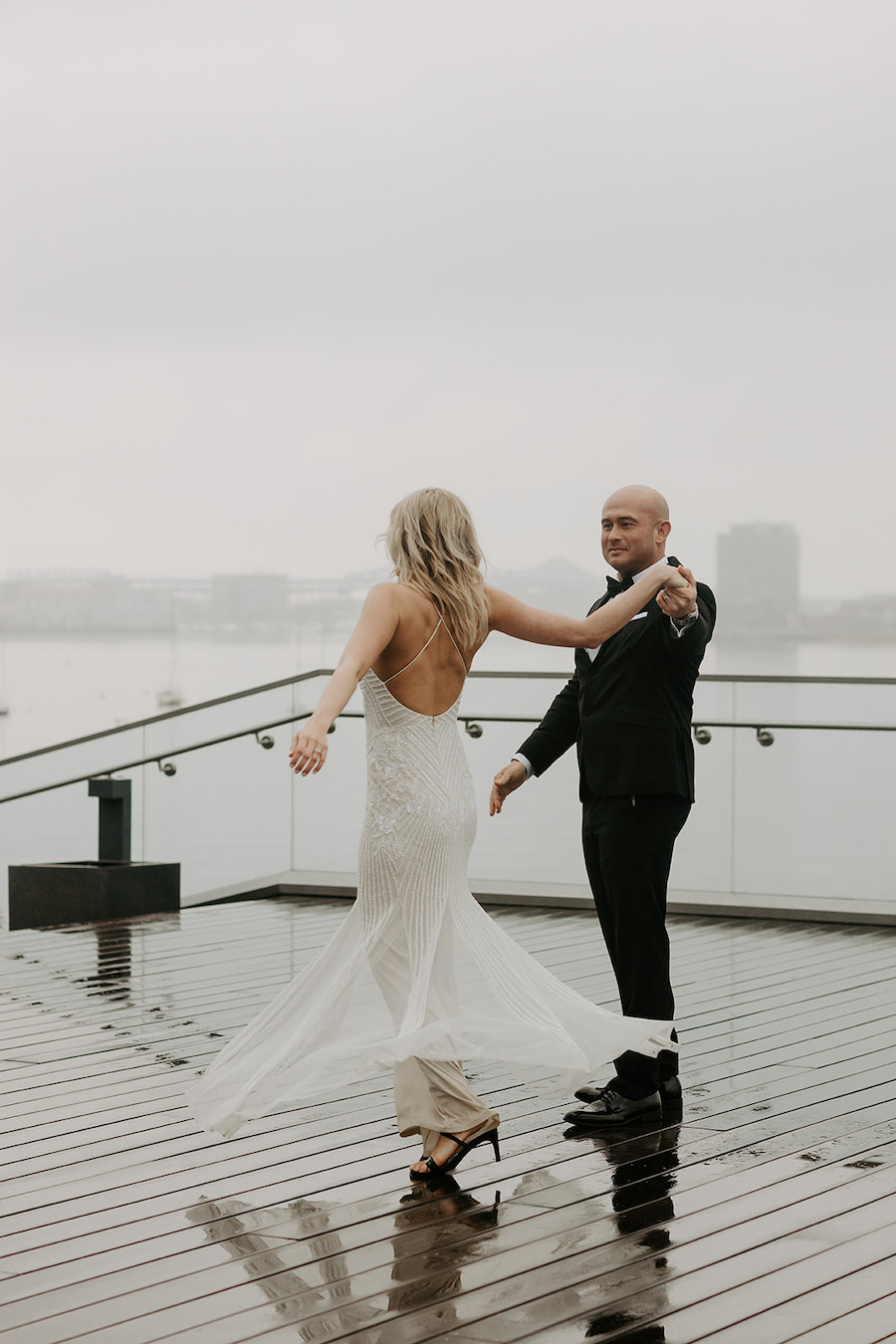 Erin asked if we wanted to do a first dance and if we had a particular song. But we have so many songs, so she said, “Okay I’m just going to put one on, so start dancing,” and that’s what we did. It felt like just us two.

We were supposed to stay until Friday, but we flew back the next day, on Wednesday, because we were worried about more and more places being shut down. We didn’t want to get stuck. We made sure to wipe our hands down and wipe the plane seats down, too. Our flight was so empty–there were only about 26 people–and everyone was very spread out.

This was definitely one of those experiences that will go down in the books. Of course, the ideal thing would have been to celebrate with everyone in Boston on Saint Patrick’s Day, but it is what it is. And the city of Boston was so great, and the people were so great. Honestly, we’re just happy to be married, and we’re happy to be home.