Thinking of changing your plans amid the COVID-19 outbreak? Read this first. 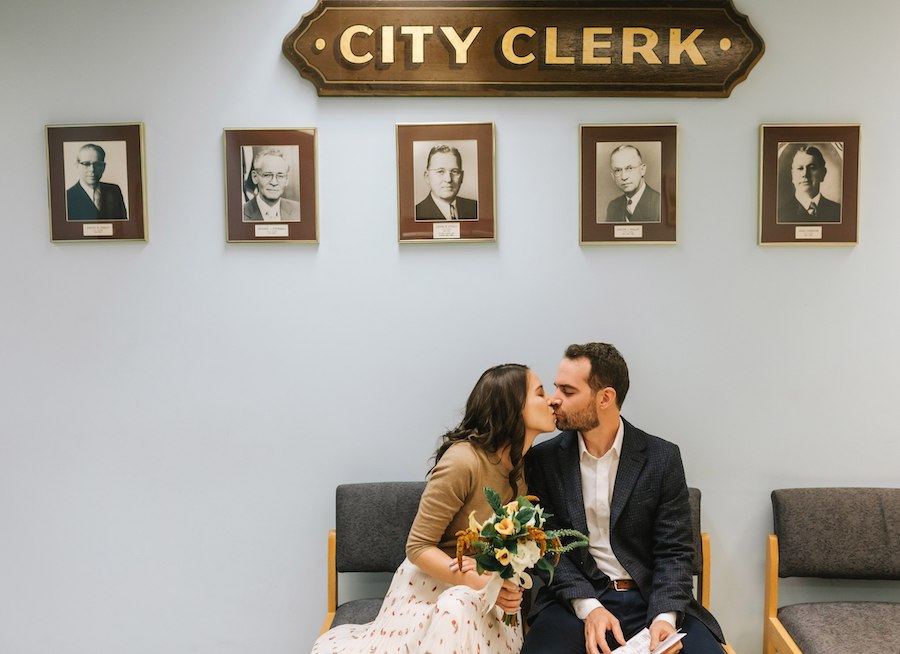 If you’re coming up with a plan B after coronavirus kyboshed your wedding plans, getting married at City Hall might seem like an appealing idea right about now. And in fact, you’re probably not the only couple in town with a quick government ceremony on the brain. “I think we’re going to see a lot of people who say, ‘Look, our wedding day didn’t happen, so we’re just going to get married and then have a big party [down the line],’” City Clerk Maureen Feeney says. But before you head downtown, there are some things you need to know about getting married at Boston City Hall now and in the future. We got all of the details from Maureen Feeney, as well as City Registrar Patty McMahon and Lena Mirisola, a wedding photographer who specializes in city hall nuptials.

What’s the standard process for getting married at Boston City Hall?

Any couple planning to get married in Massachusetts can head to City Hall’s Registry Department to apply for a marriage license using the Marriage Intention Form. According to the City of Boston’s website, where you’ll find additional details about the process, you need to apply in person and have everything on hand that you’d probably expect: a form of valid identification, your social security number, and so on. There is a $50 application fee and a three-day waiting period after you apply. Once that’s complete, you’ll go back go to City Hall to pick up your license, which—whether you plan to get married at City Hall or elsewhere—you’ll need to give to your ceremony officiant.

Once you have your license, you can go ahead and schedule your ceremony at City Hall by contacting the City Clerk’s Office or the City Registrar. Wedding ceremonies cost $75 and last about 15 minutes. On the big day, don’t forget to bring your marriage license and an ID.  Swap vows and congrats—you’re married! However, it’s important to note that amid the coronavirus outbreak, this process is slightly different than outlined above. More on that below.

Can we get married at Boston City Hall right now during the coronavirus outbreak?

In short: no. According to Feeney, the last City Hall wedding she personally officiated occurred back in March. McMahon, meanwhile, says she did officiate a few weddings in a hallway at City Hall in April, but those were booked back in February before City Hall partially closed to the public. Currently, Feeney says the building is only open to the public on Tuesdays and Fridays from the third floor downward. And although the sixth-floor City Clerk’s office has opened a temporary office on the second floor, ceremonies at are not occurring there.

Can we still get our marriage license?

This one is a “yes,” but the process is currently a little different from the standard protocol outlined above—and might require some extra patience. According to McMahon, when towns around the state closed their city halls back in March, Boston City Hall—which continued to offer marriage licenses—received a rush of visits from out-of-town couples who were desperate to complete their applications. “We had 60 couples come in to file a marriage license in one day,” she says. “Obviously, that’s a challenge with social distancing, so we had to figure out how we could spread those out and keep couples and staff safe.” Couples must still apply together and in person though, so the department created a new online form allowing brides- and grooms- to-be to book appointments to come in (one couple at a time) to apply for a marriage license.

However, between the influx of people trying to secure a marriage license at Boston City Hall and the building’s abbreviated operating hours, these appointment slots have been filling up rapidly. All slots offered through the end of May booked up in March, and Wednesday, when the Registry Department posted a new batch of openings for the first two weeks in June, they had filled up completely by the end of the day. For now, the department will continue offering a few weeks of available appointments at a time, McMahon says, but you’ll want to think strategically about when you’ll actually need to come in based on when you plan on getting married (keeping in mind that licenses take three days to process and expire after 60 days) and then act fast when booking.

What should we do if we have our marriage license, but can’t tie the knot at City Hall due to the partial closure?

Many local justices of the peace are still performing wedding ceremonies amid coronavirus. Alternatively, as all three experts suggest, you can ask a friend or family member to apply for a One-Day Marriage Designation in Massachusetts so they can officiate your nuptials. McMahon notes, however, that whoever is enlisted to do so must be physically in the same room as the couple during the ceremony, meaning you cannot ask Uncle Jerry in New Jersey to marry you over Zoom. McMahon also advises that if you do already have your marriage license, you should make things official ASAP even if your original wedding plans are no longer possible: If you wait too long to get married and let your license expire, you’ll have to go through the application process all over again. 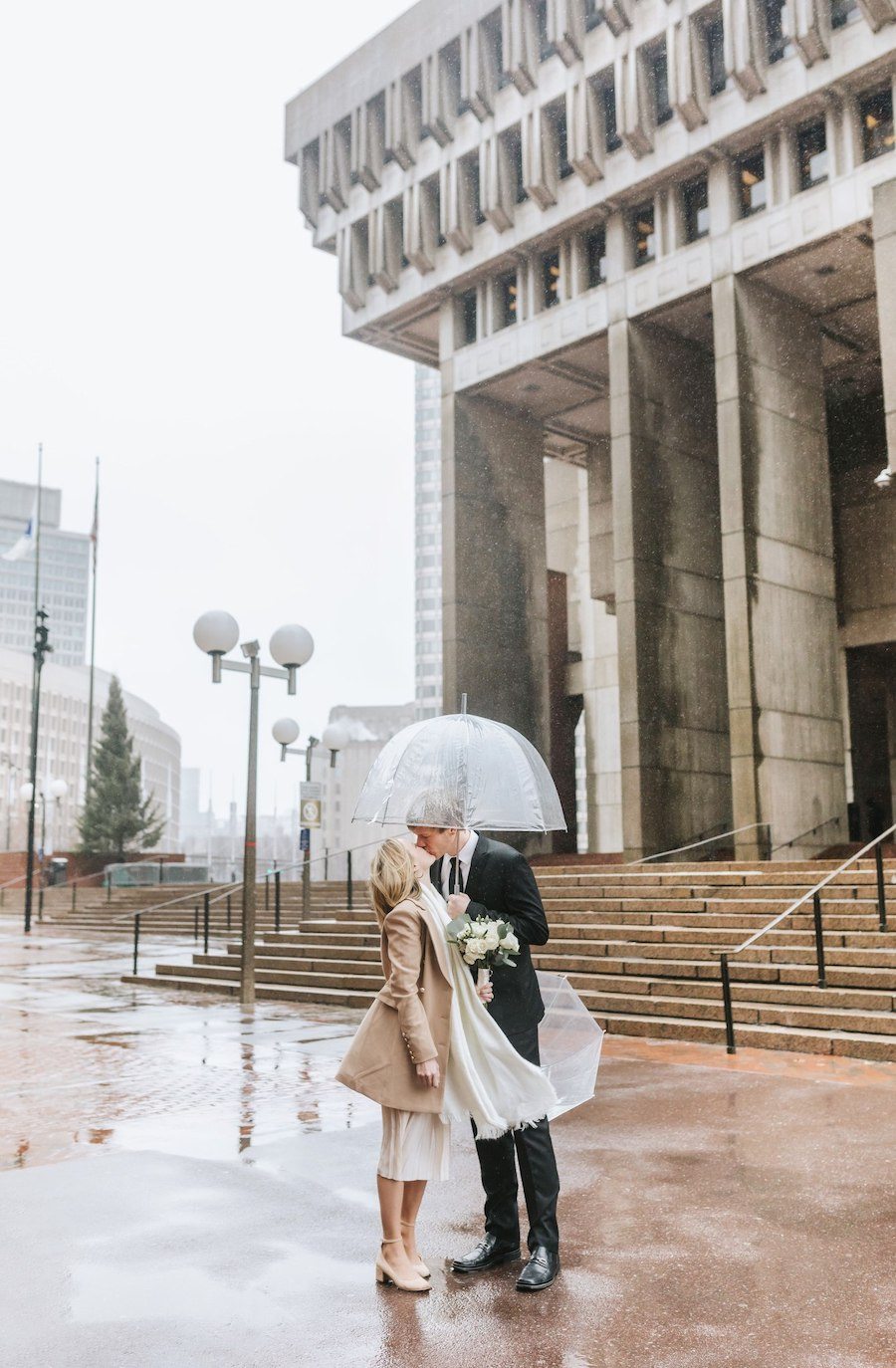 Right now, that isn’t quite clear. Feeney theorizes that “It’ll probably be at least another couple of weeks before we talk about that,” but she suspects “There is going to be some movement around these things,” she says. “Hopefully people can hang in there just a little bit longer.”

In addition, the City Clerk says before City Hall weddings start up again, they will need to have internal discussions about where ceremonies might occur going forward. Typically, they take place in the office of the Registrar, the office of the City Clerk, or the office of the Assistant City Clerk. However, bringing hordes of people in and out of these small rooms no longer seems feasible in the age of social distancing. “I think it’s an opportunity to see if there are other areas in City Hall that we might be able to use so that we can perform these ceremonies and still have people have a comfortable setting with some kind of privacy,” Feeney says.

Will we have to wear masks if and when we are able to get married at City Hall?

According to Feeney, this will most likely be the case. “In talking with the Assistant Clerk about a week or two ago, [we decided] that once we begin again, we will ask people to wear masks. It’s really about social distancing,” she explains. “That’s the bigger issue.”

How many people will we be able to bring with us?

Typically, up to four guests are allowed at a City Hall wedding. Though Feeney did not say whether this number may change when City Hall resumes full operations, she did indicate that video conferencing may be a good option for couples who’s like to include their loved ones, adding that it’s something more people have been doing over the years so they can include faraway relatives.

We didn’t originally plan to have a City Hall wedding but are now contemplating it given the gathering capacity regulations we may see in the future. Can we still expect it to be the special, personal experience we’d always imagined for our wedding day?

According to Feeney, all brides and grooms can be certain that her office wants to do whatever it can to help make a City Hall wedding a meaningful occasion for all couples. “We really try to make it as personal as possible no matter what the reason is that they’re coming to get married at City Hall,” Feeney says. “I do talk with couples a bit and find out a little about them and everyone has such a unique story. Some couples just want to get married and don’t want any frills, which is fine, and some couples write their own vows and add their own little niceties to the ceremony. It’s really just a gift to share in people’s happiness.”

Mirisola, who has witnessed many a City Hall wedding from behind the camera, agrees. “The ceremonies performed by all three [City Hall officiants] are meaningful and loving. There’s also a lot of clapping after the first kiss, even if it’s just me and Maureen [Feeney] there,” she says. Plus, the photographer adds, a City Hall elopement often allows couples more freedom on their wedding day: “They don’t have to conform to tradition or obligations, they can enjoy whatever cuisine they want, they can stop into a bar for a quick glass of whiskey before portraits,” Mirisola says. “Everything is a fun adventure.”

What should we know about hiring a photographer for our City Hall elopement?

Mirisola has two key pieces of advice. First, make sure your photographer is skilled at retouching photos. “Getting married at City Hall means you’re shooting in the middle of the city, and as much as we love Boston, it is dirty. There’s usually discarded Dunkin cups on sidewalks, dark gum spots, dirt, cracks, and potholes in the pavement, random tourists in bright jackets in the background, trash cans, and cigarette butts,” she says, adding that all of those distractions can and should be edited out of your photos by your photographer. Secondly, you’ll want to hire someone with a portfolio that includes multiple City Hall weddings. Why? “They know how to time crosswalk photos to not get other people in the background, they know all the secret streets in Beacon Hill that don’t have cars parked on them, they’ll have the patience to wait for the bridge in the Public Garden to clear out for a five-second open window for photos, and they can adapt their camera settings from inside a dark MBTA train to outside on Newbury Street,” the pro explains. Makes sense to us.