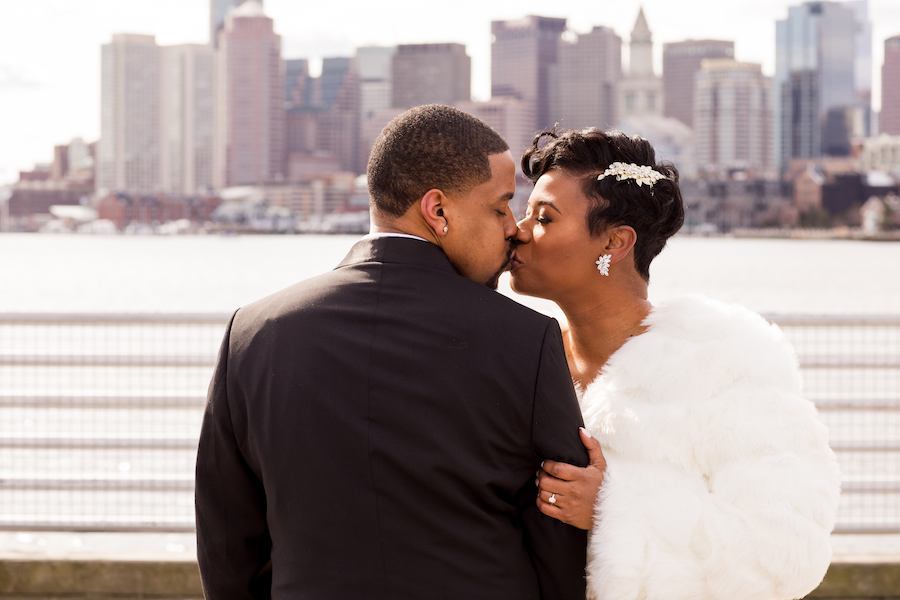 The first time Isabel Senat and Josue Viciere walked down the aisle, he didn’t even have her number yet. They were both part of the bridal party at their mutual friends’ wedding in May 2016, and they were paired up to enter the ceremony together. “When his buddy told him who the ladies in the bridal party were, [Josue said], ‘Oh, I want to be partnered with Isabel.’ So that was how he kind of snuck his way into my world,” Isabel says. Later during the wedding, Josue asked for Isabel’s number, but she was “a little apprehensive,” she says, and replied that if they ran into each other again in the future she’d share her digits. And, as fate would have it, a few months later they found themselves at another mutual friend’s wedding. “That’s when I made good on my word,” she recalls.

Afterward, they began texting and became fast friends. Isabel helped Josue get a substitute teaching job at the school where she works as a guidance counselor, and Josue helped her renovate the house she’d recently purchased. Then, in the summer of 2018, Isabel’s father suffered a stroke and was hospitalized. “That was when we got close. Josue was just there for me,” she recalls. “And while he made it clear that he was interested in me, he also didn’t push me because he knew I had a lot on my plate.”

Later, in summer 2019, Isabel decided to take a solo vacation to Saint Martin and Anguilla, and asked Josue to help her find a nice place to stay. He did, and two days into her trip, she received a knock on her hotel room door. It was Josue. “I figured he must have come on the trip to ask me to be his girlfriend,” Isabel recalls. Later, after spending the day exploring Anguilla, Isabel noticed Josue was acting strange. When they returned to their room to relax, Isabel mentioned she’d received an invite to a party and was allowed to bring a plus one. “I was like, ‘I would ask you but you haven’t asked me to be your girlfriend,’” she says. “Then he said, ‘Oh, you want me to ask you to be my girlfriend?’ He was being silly with it, so I said if he was going to ask me to be his girlfriend he might as well get on one knee.” Josue then knelt down and asked, “Would you do me the honor of being my wife?” “I was like, ‘You’re so silly I have to be your girlfriend before I’m your wife,'” Isabel recalls, “And he said, ‘No. Ever since I met you, you’ve always said you’re asking God to send you a husband, not a boyfriend, so I came here to ask you to be my wife.”

When it came to choosing a wedding date, the couple wanted to get married as soon as possible. “We wanted to be sure my dad could be there just in case his health failed,” the bride says. They decided on a February wedding at Del Frisco’s Double Eagle Steak House in the Seaport, their favorite restaurant in the city where they were both born and raised. As for their guest list, they opted to invite only their parents, siblings, and their siblings’ spouses—an intimate party of 20—and also planned a larger celebration with 300 guests for May (which has since been postponed due to the COVID-19 outbreak). The pair also prioritized enlisting Black-owned wedding businesses to help put on their soiree, including photographer Flavio DeBarros, makeup artist Joanna Petit-Frere, floral designer Sydney Smith, and planner Octude Bastien. “I can’t get enough of that day. It was perfect, even though it was intimate,” Isabel says. “It’s not often that you are able to be with your entire family in one place and just enjoy each other, so it was really special. Life is short and you never know when you’re going to be able to have that happen again.” 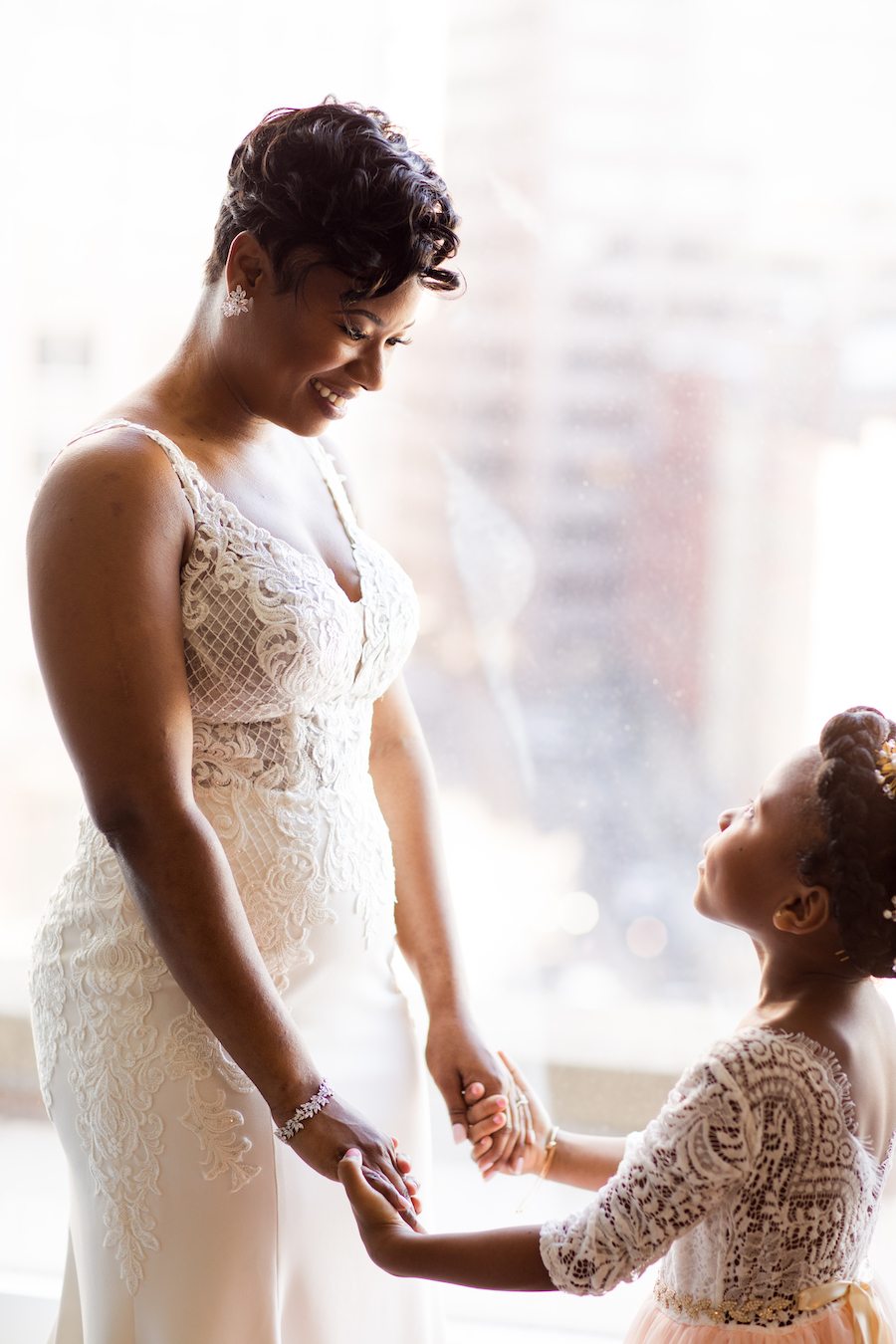 One of Isabel’s favorite moments from the day was when her step-daughter, Aubrey, asked if they could take a picture together while she was getting ready. “She asked the photographer, ‘Can I get a picture with my new stepmom?’ And that touched me because in that moment I felt like, ‘Oh wow, she really loves me.’ I felt like it was her giving me her blessing.” 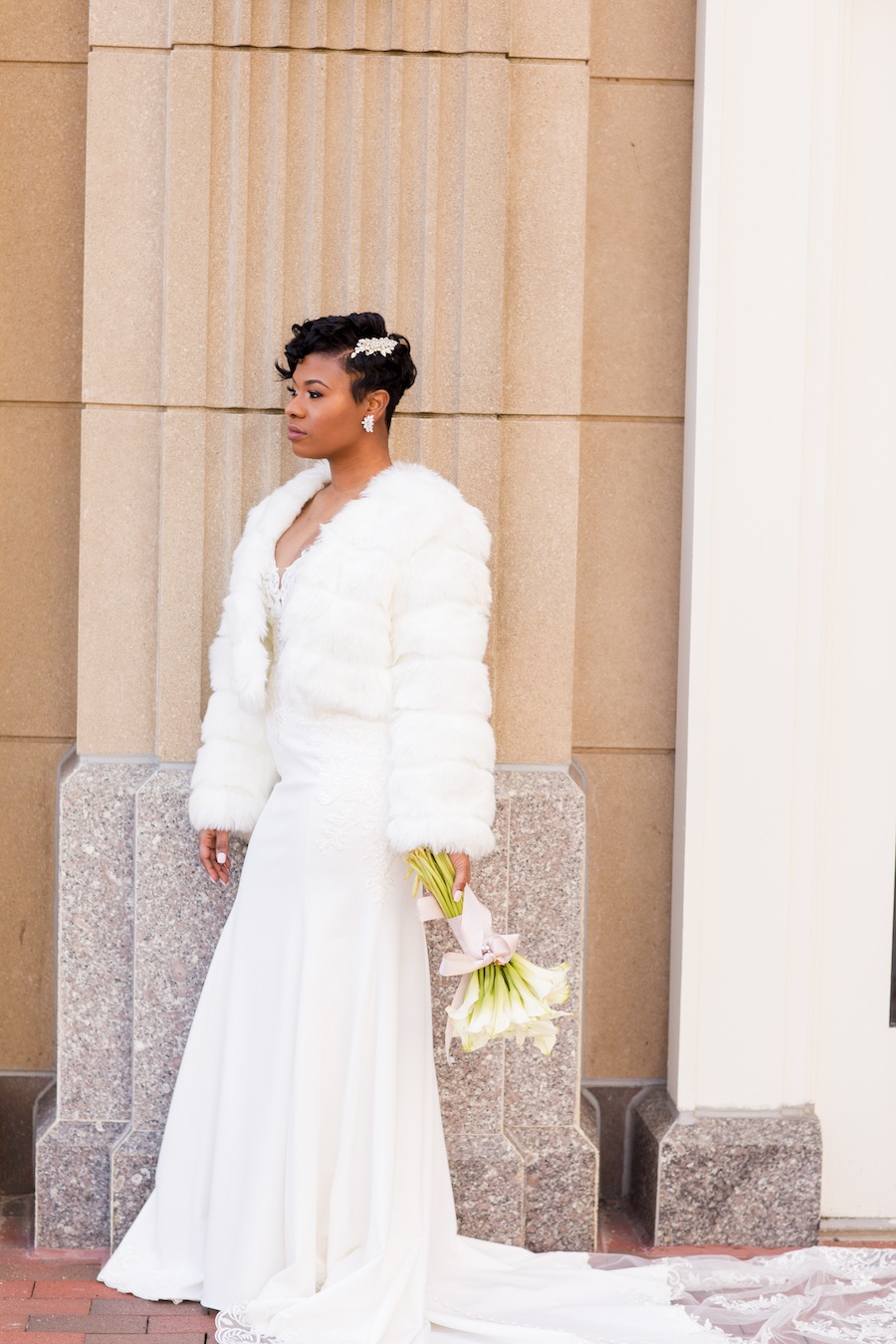 Isabel chose her Essense of Australia frock because it was comfortable, as well as “elegant and sexy,” she says. She paired the gown with a jacket borrowed from a friend and a bouquet of calla lilies, one of the few types of flowers she’s not allergic to. 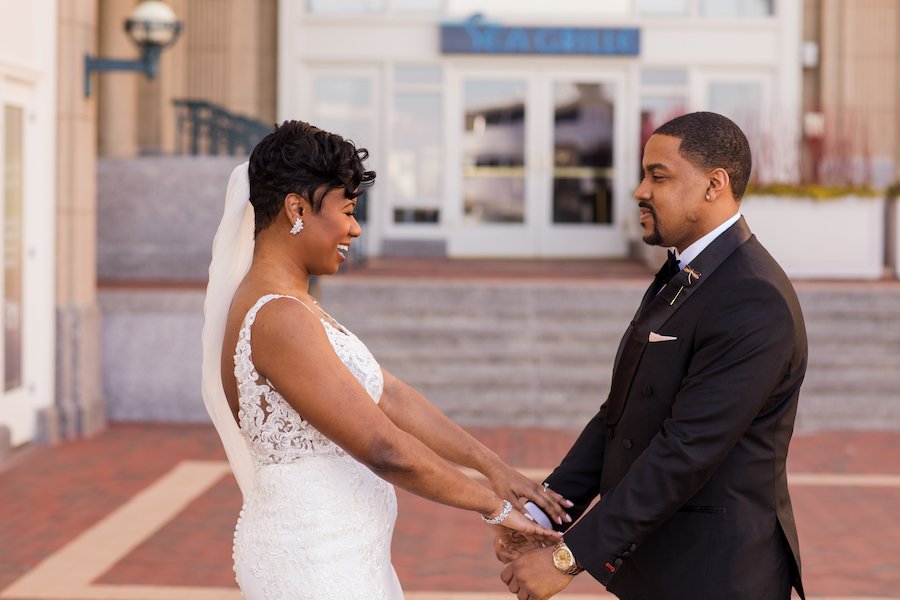 The bride and groom had their first look outside of the Boston Harbor Hotel. “It was pretty cold outside, but I was just so excited I didn’t even realize how cold it was,” Isabel says. “I think in that moment I was just thinking, ‘Wow we’re here. I’ve got my best friend and we’re about to embark on this journey together.'” 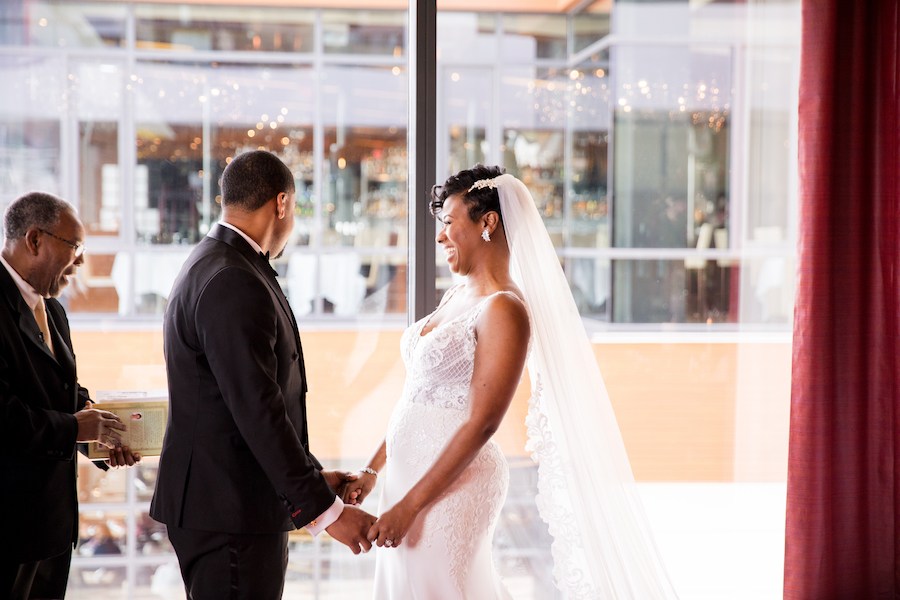 Josue’s childhood pastor, Reverend Dr. Soliny Védrine, officiated the couple’s wedding. “He’s known him since he was a little kid. We were really intentional about who would marry us and wanted to make sure it was someone who knew us and knew our culture,” Isabel says. Since both the bride and groom identify as Haitian-Americans, the pastor also wove some French and Haitian Creole into the ceremony. 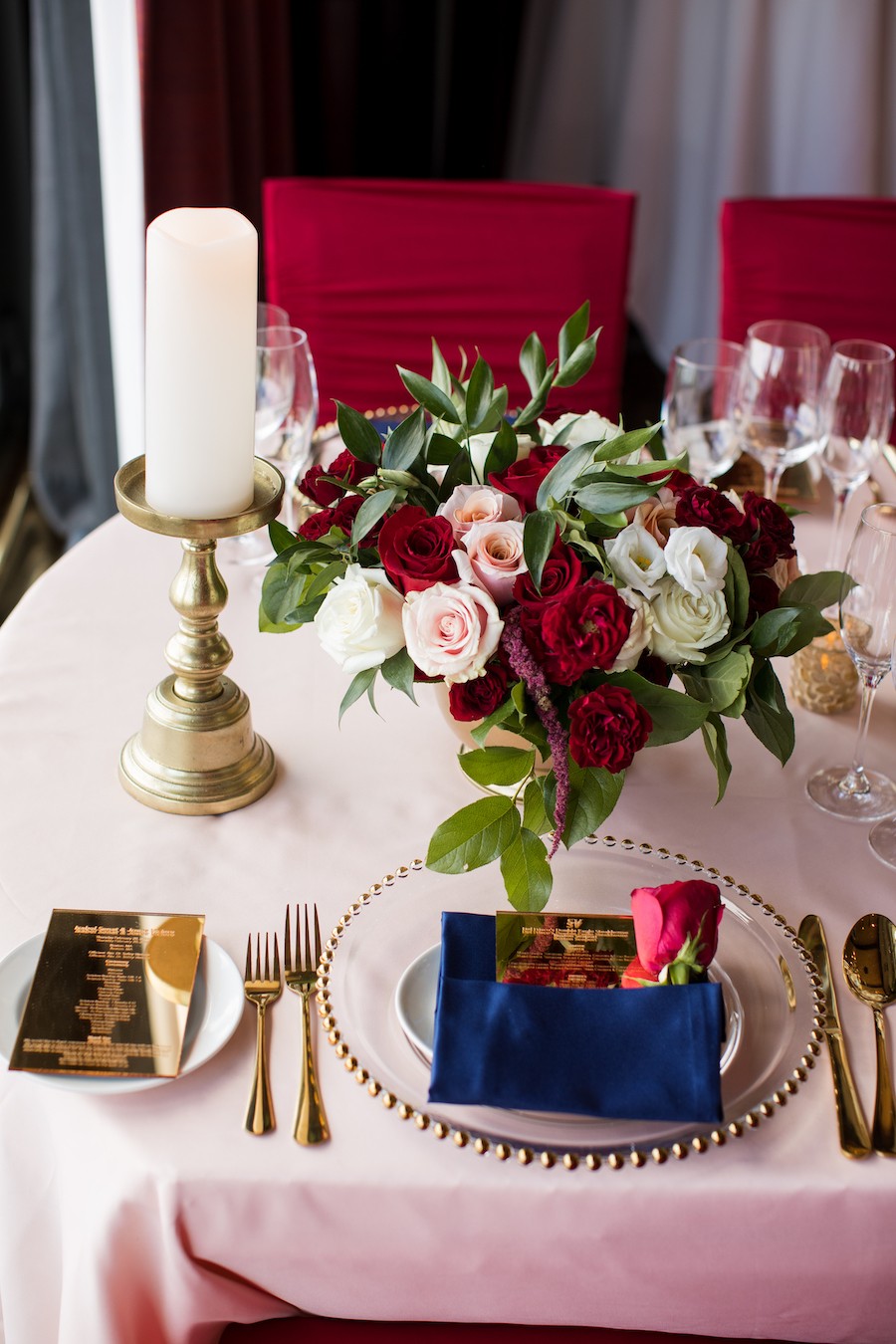 “It wasn’t until I arrived at Del Frisco’s that I saw everything put together for the first time, and I was amazed,” Isabel says of the long table the couple shared with their nearest and dearest. The pair dressed it up with gold accents and rose-filled centerpieces, which they later gifted to guests. 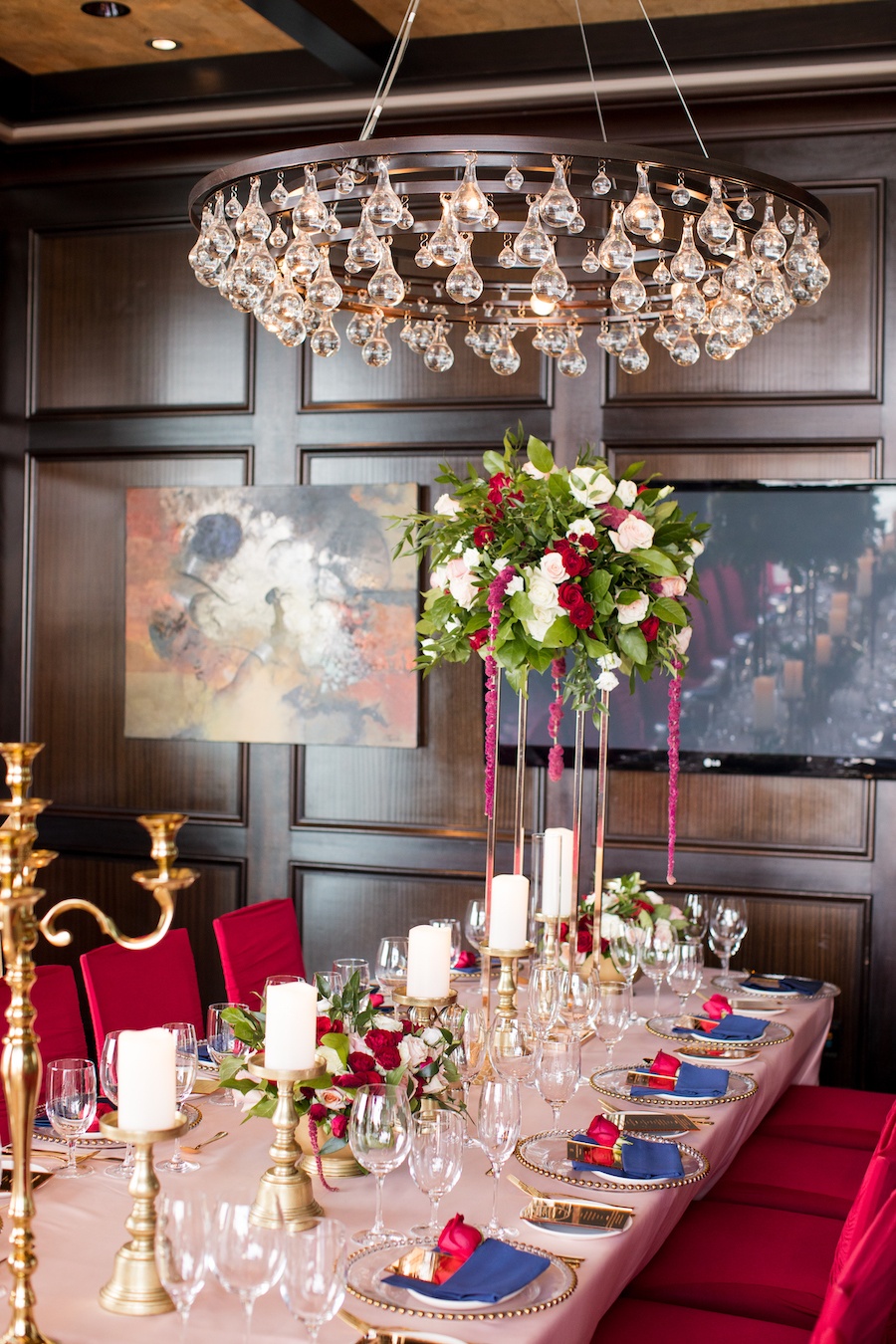 The décor for the evening took on a blue and red palette, which coincidentally matched the colors of the Haitian flag. “Someone mentioned that to me [later] and it wasn’t until then that I realized it, but I was really happy to see that because we take pride in our culture,” Isabel says. 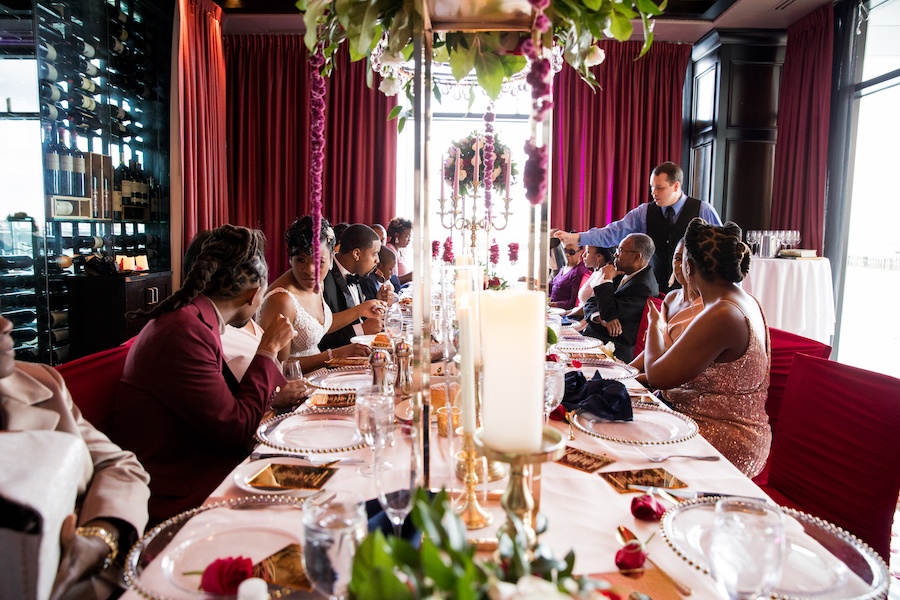 “There was lots of laughing and storytelling and taking pictures,” Isabel recalls of the wedding reception. “And we’re very welcoming, so all of our guests including our photographer and event planner sat at the table with us so we could all enjoy the moment together. I wanted to make sure they felt like they were part of our family.”