By I'm a scraper
Weddings

We're not sure who is more adorable: this couple, or their dog. 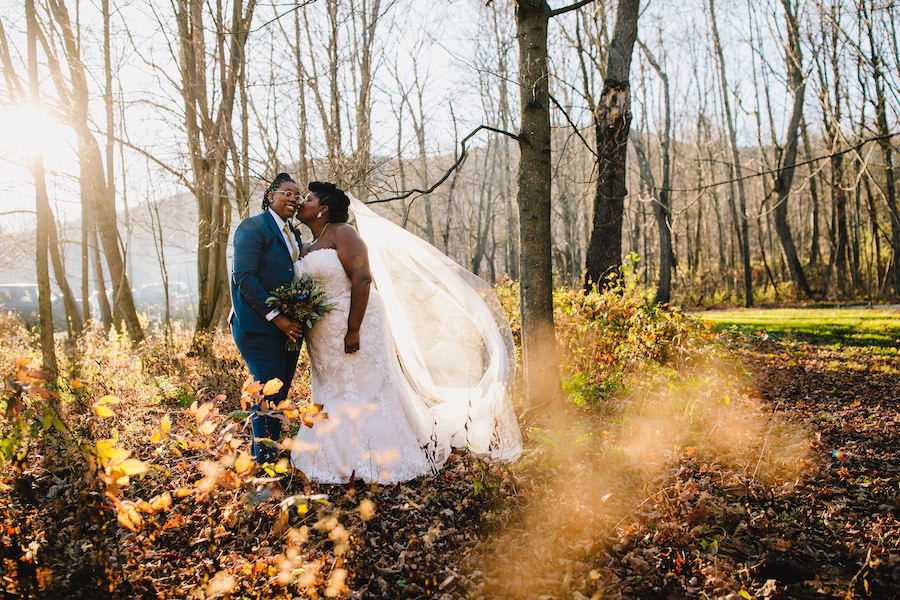 Tasia Bradley and Sa-kiera Hudson met in March 2017, and needless to say, the sparks were not exactly instant. Tasia had just moved to Connecticut from the Midwest, and headed up to Boston on her first weekend there to visit a friend. That friend then introduced Tasia to one of her friends, Sa-kiera. “She did not like me,” Sa-kiera recalls of their first encounter. “I remember meeting Tasia and thinking she was standoffish, but over time, I was like, ‘Oh, I like your personality.’ I left thinking she was a pretty cool person, not knowing she didn’t like me at all.” Tasia didn’t plan on coming up to Boston to hang out with her friend and Sa-kiera again after that, but not long later, another mutual friend invited her to go back to Boston in a couple of months to stay at Sa-kiera’s apartment and celebrate her birthday. “I thought, ‘If I’m going to go back then I need to get to know Sa-kiera and actually see if I like her enough to stay in her very tiny apartment,'” says Tasia. They exchanged numbers through their mutual friend, and about a week later Tasia texted Sa-kiera. They began chat by text and on the phone every day for about a week. “The connection was pretty much instantaneous at that point,” Sa-kiera says. Tasia then decided she couldn’t wait a few more weeks until Sa-kiera’s birthday to see her again, so she drove up from Hartford to visit Sa-kiera and “essentially never left,” as Sa-kiera puts it.

As for what Tasia attributed to her change of heart? “I thought [Sa-kiera] was super attractive and, outside of the initial meetup, she has a great personality. When I started to get to know her, I was shocked because she was everything I wanted in a partner but never thought I’d actually find,” she says. Later, at her birthday party, Sa-kiera knew the deal was pretty much sealed. “My birthday really solidified it for me. A lot of my friends who came felt that Tasia was my soulmate and someone who should be by my side. I was like, ‘Alright, I guess we’re about to do this.'”

Within a few months, the two had picked out engagement rings together and Tasia knew Sa-kiera was going to propose at some point soon. On their one-year anniversary in May 2018, Tasia booked them a stay at a hotel in Back Bay. At the hotel, she ran Tasia a bath decorated with rose petals and tea lights and gave her a bath bomb that had a secret fake ring inside as a hint at what was about to happen. When Tasia came out of the bathroom, Sa-kiera surprised her and got down on one knee. “I probably got three words out before she started to cry, and then when she started to cry, I lost my place, so I don’t even know what I said, but she definitely said, ‘Yes,'” Sa-kiera recalls. Just over a week later, Tasia reciprocated by proposing to Sa-kiera on her birthday out on the balcony of their suite while they were on a family cruise.  “I read her a letter to tell her how much I loved her and all the ways she makes me happy and how I wanted to continue to make her happy,” recalls Tasia, “I got down on one knee and she started crying before she even opened her eyes.”

When the two started planning their wedding, they were in search of a rustic-yet-modern venue where they could treat guests to a three-day wedding experience. While they were on the hunt for somewhere to tie the knot, they attended an event at Williams College in Williamstown, where Sa-kiera had attended school. “Tasia said, ‘I could absolutely get married here,'” remembers Sa-kiera, and not long later, they came across Bloom Meadows, a local venue with a contemporary white barn set on 75 acres. The locale had one date left on the calendar for 2019—November 2—and so on that day, the couple filled the space with wood accents, simple floral arrangements, and plenty of DIY décor. “We wanted our guests to celebrate us, but we also really wanted to put our love into the things we were giving people,” Tasia says. The other goal of their day? To find subtle ways to buck convention. “We wanted it to feel non-traditional because we’re two lesbian women and we’re Black,” Tasia explains. “We just wanted to really break barriers with our love.” 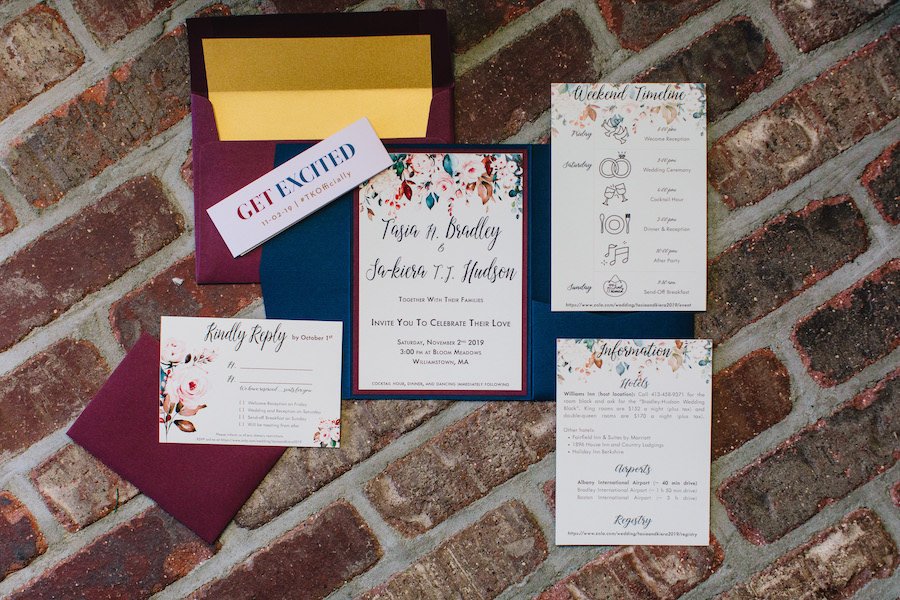 “I really like stationery, so I made our wedding invitations. I designed them and then we assembled them together,” says Sa-kiera. “That was a lot of fun.” 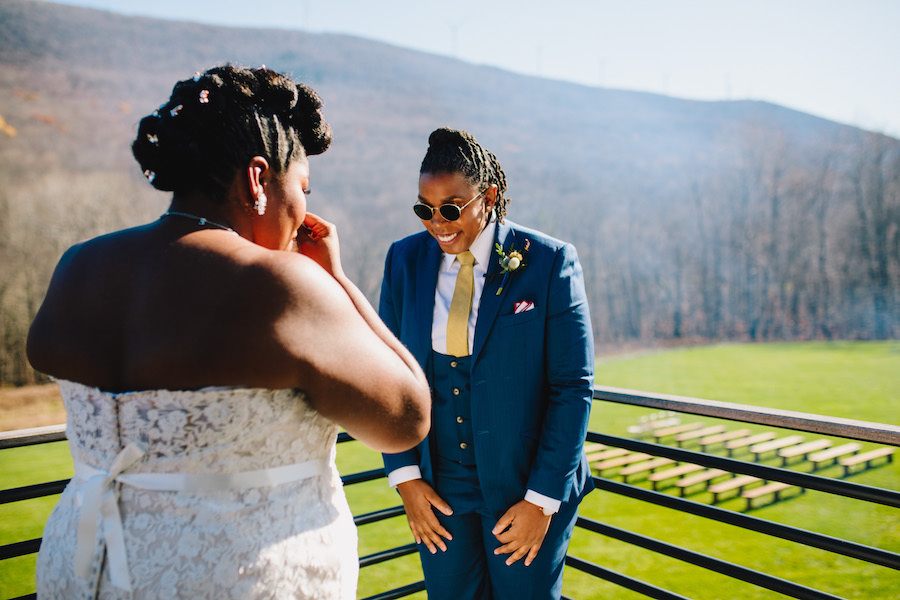 Although Sa-kiera watched Tasia try on dresses ahead of the big day, she didn’t know which frock she ultimately chose. All was revealed during the couple’s first look on a balcony overlooking the landscape at Bloom Meadows, however. “[Sa-kiera] turned around and we locked eyes,” Tasia recalls. “I remember feeling like it was the first day of the rest of my life and I was so happy I got to do it with her.” 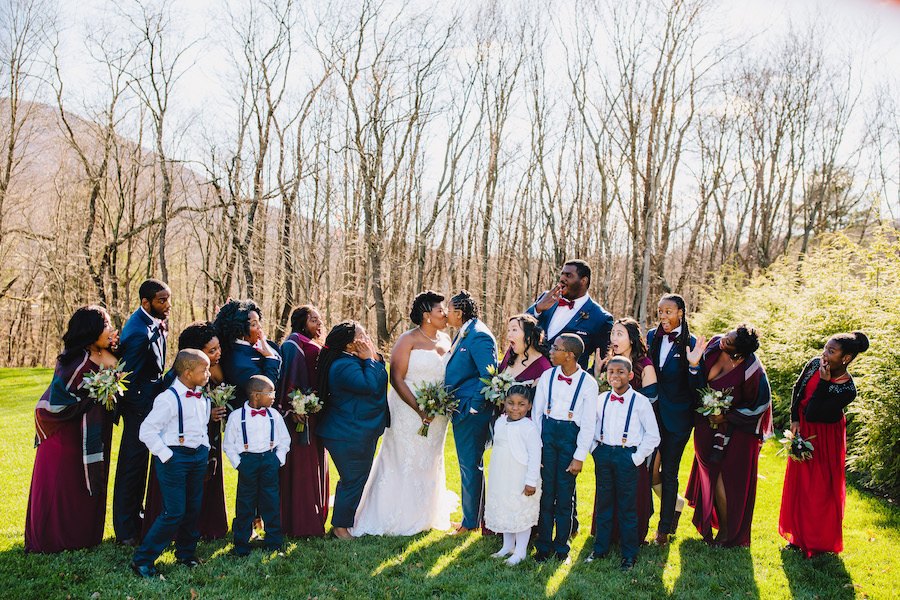 The two dubbed their bridal party “friends of honor” because they chose not to separate their group by gender. 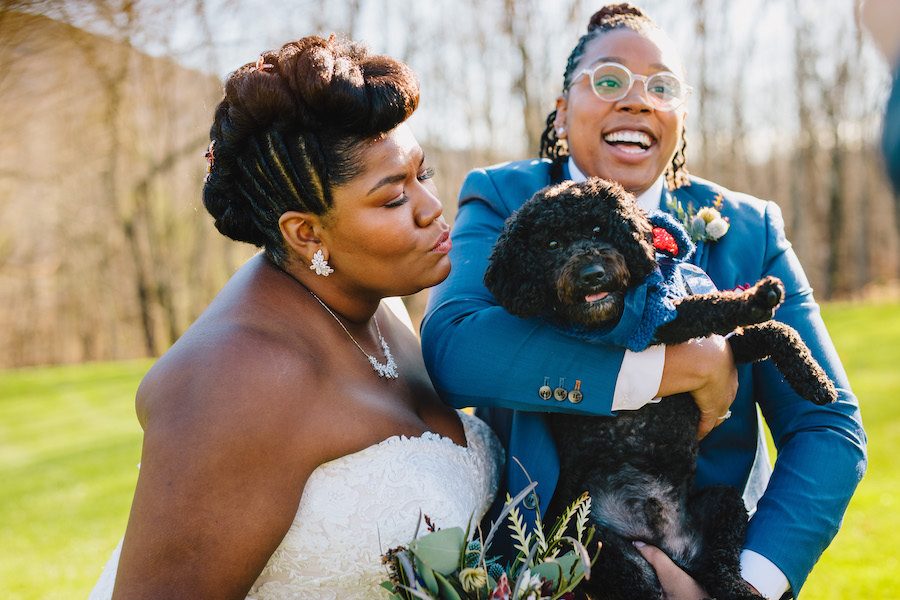 The couple’s dog, Mazu, was too excited to walk down the aisle with the brides’ ring bearers as planned, but he did join the pair for photos, donning a tuxedo that the pair’s friend knitted for him. 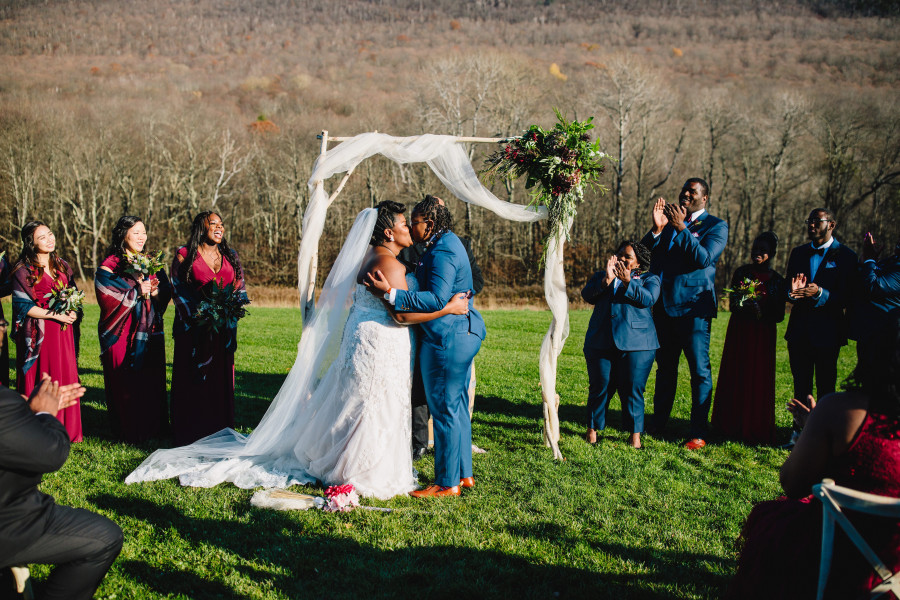 In their ceremony, Tasia and Sa-kiera incorporated a reading from the Supreme Court’s ruling legalizing gay marriage, held a tea ritual in which they poured together two hot teas that represented their individual selves uniting, and finished things off by jumping the broom together. 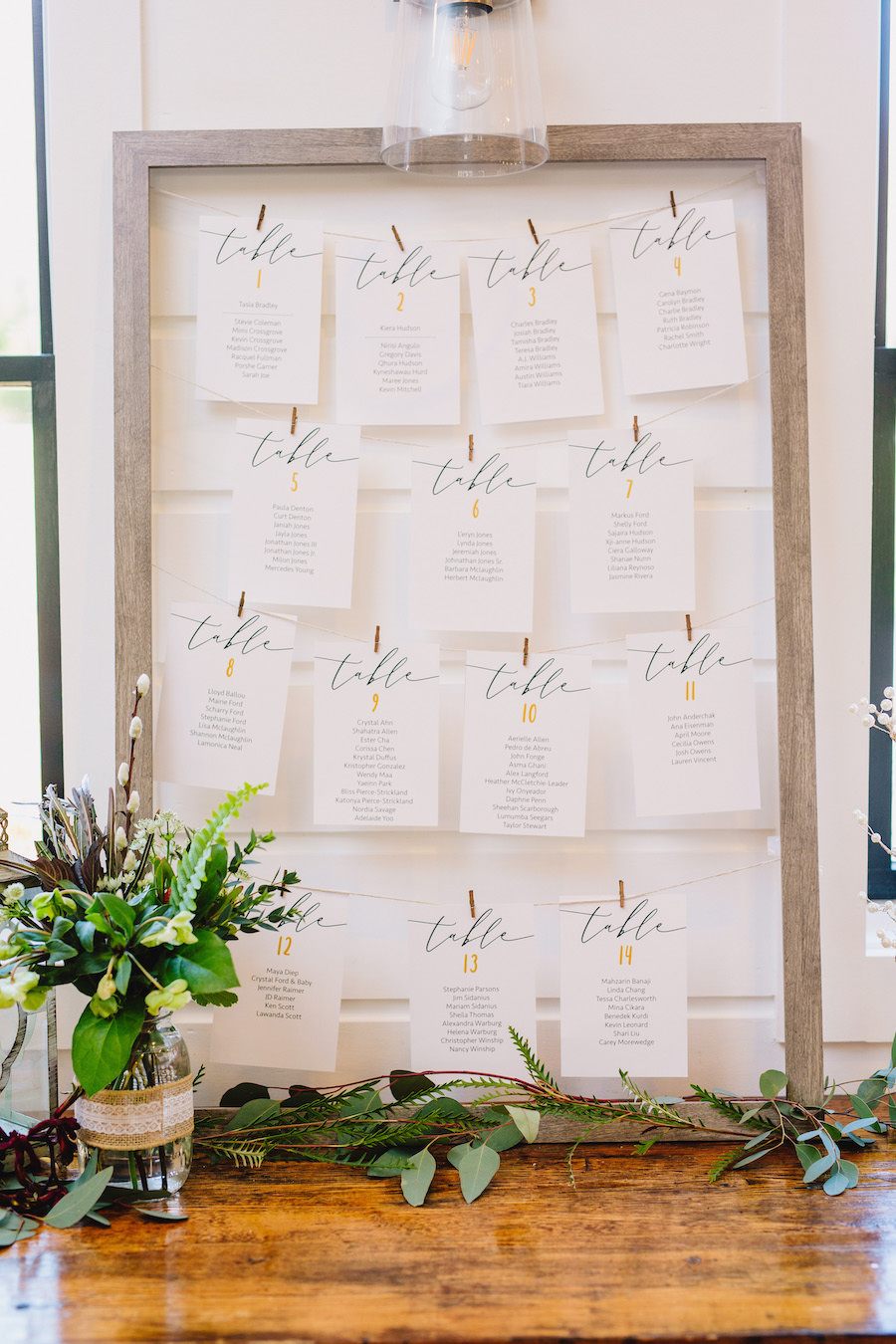 Sa-kiera made the couple’s seating chart using a frame that she took the glass out of and strung string across. She attached the seating cards using miniature clothespins. 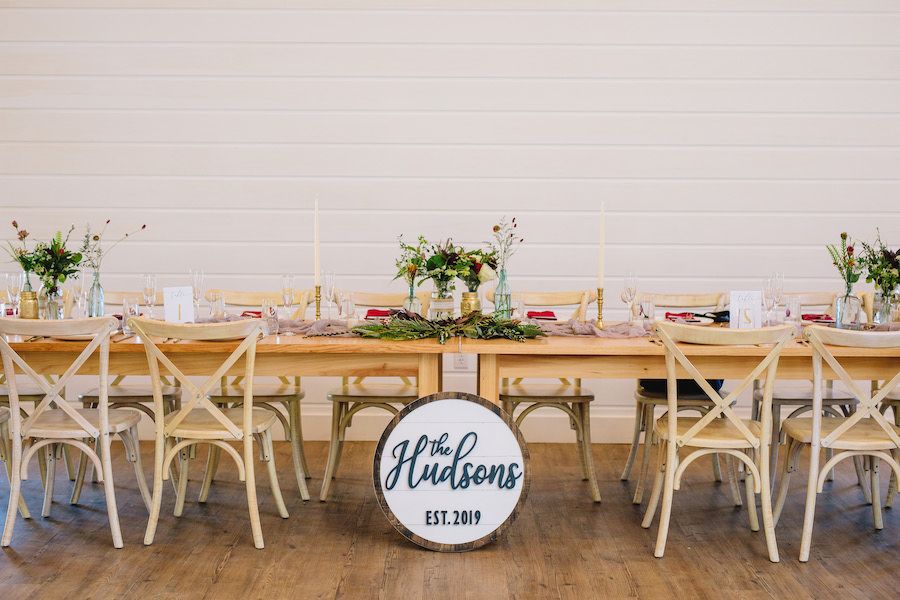 “It was rustic, but there was an elegance to it,” Sa-kiera says of the couple’s mostly-DIY wedding decor. 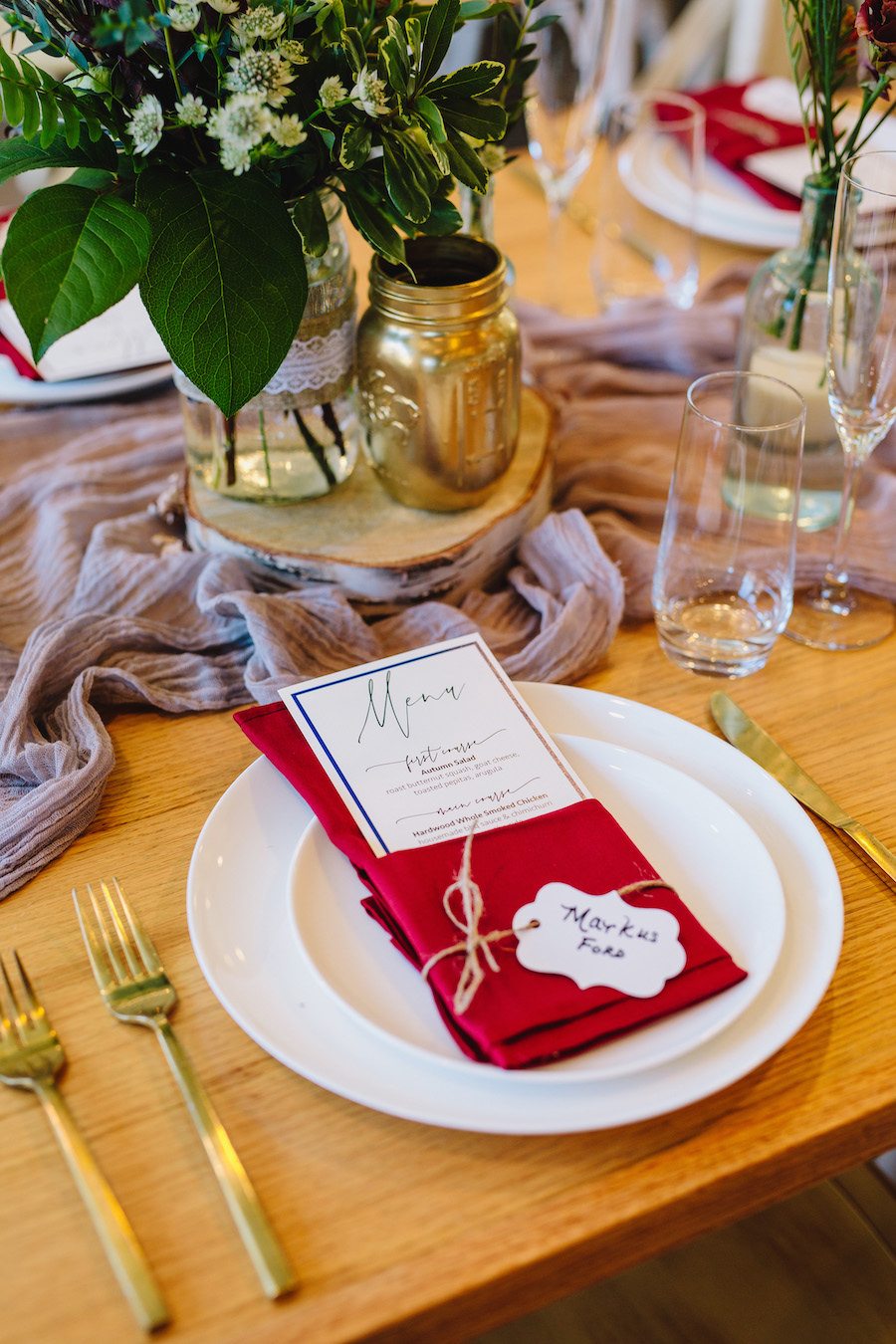 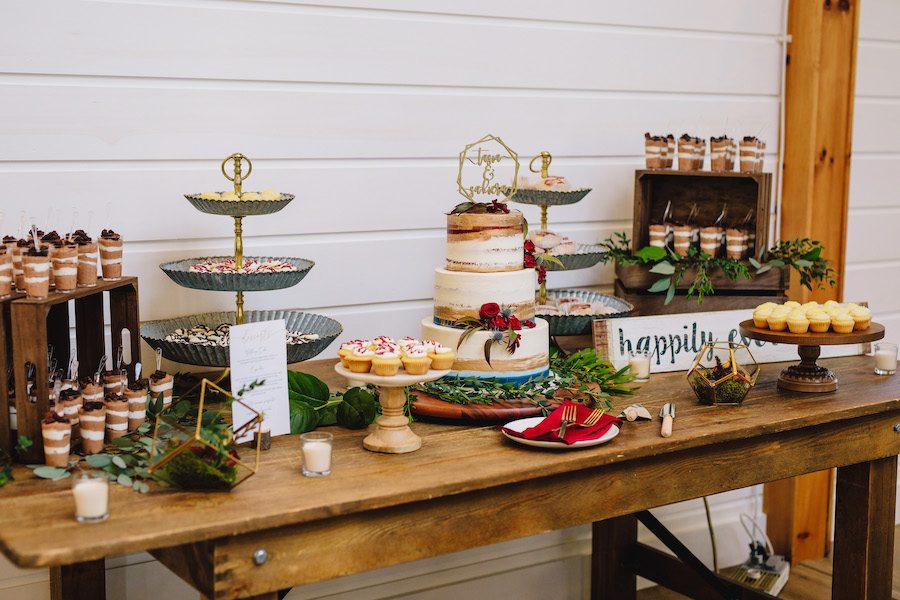 On their dessert table, the brides served loved ones a three-tier almond cake with italian buttercream, lemon curd and raspberry jam, mini cupcakes, lemon bars, chocolate mousse parfaits, and raspberry cheesecake bars. “[Our guests] cleaned us out, which is exactly what we wanted,” Tasia says. 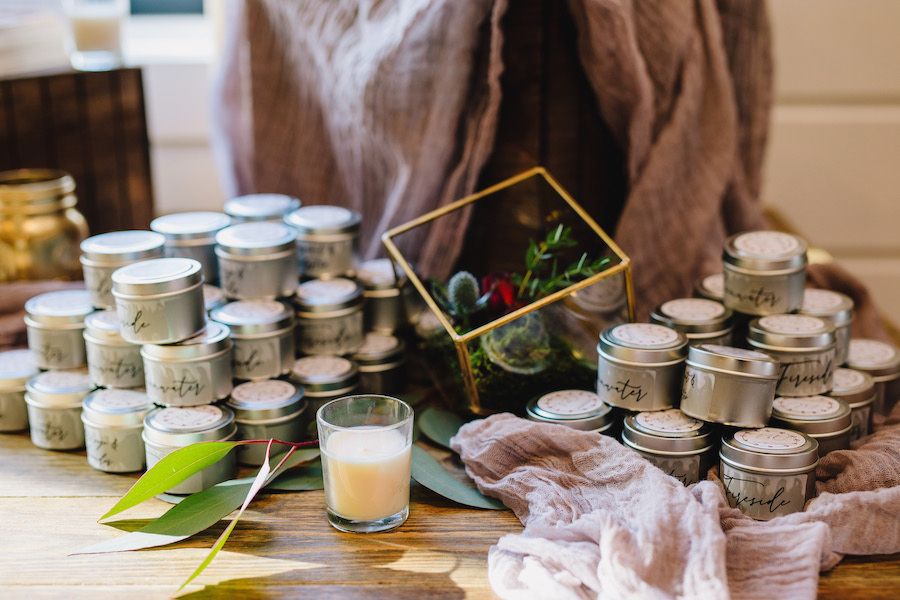 Tasia and Sa-kiera made all of the favors for their wedding, including bookmarks and candles that they gave out to their “friends of honor.” 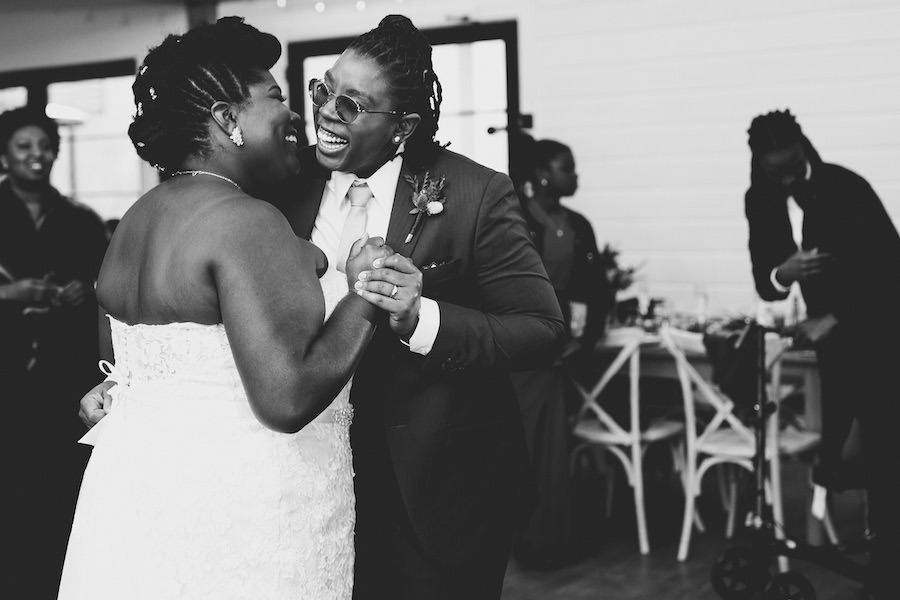 The newlyweds had their first dance to “Stars” by Kindred the Family Soul, a song Tasia introduced Sa-kiera to. “Our first dance was kind of funny because I don’t really know how to dance, but our DJ refused to stop playing the song because I think she just thought we were so cute.”