The celebration was livestreamed on Zoom for family and friends. 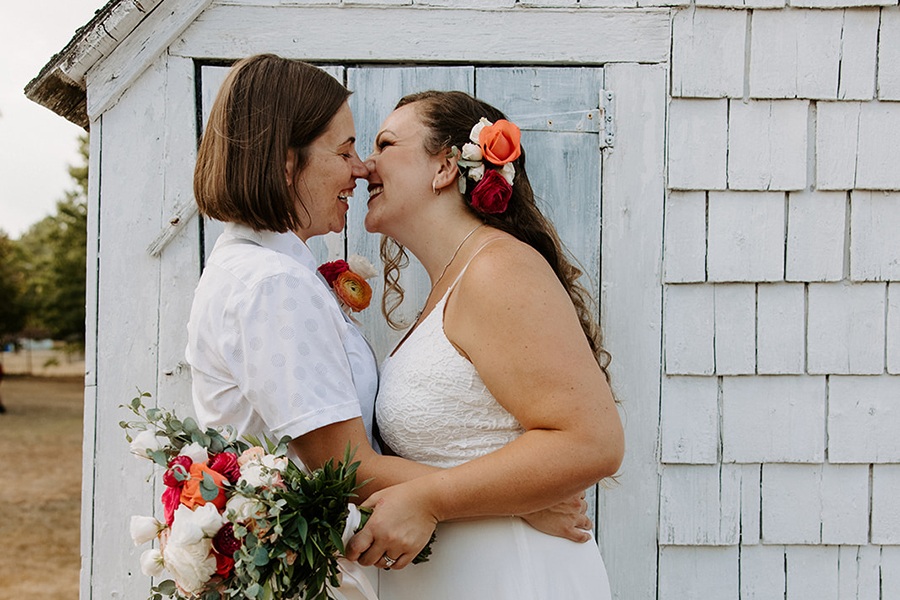 Although Ayla Axeloons and Roberta Bergstein lived just three blocks away from each other in Waltham, it wasn’t until they both embarked on a Birthright trip to Israel in 2017 that their paths first crossed. Fast friends, the two soon discovered they had much more in common than their Jewish faith and addresses. “We could talk for hours with ever-flowing conversation, and we really bonded over a love for food,” Roberta recalls. “There was something about each other that we couldn’t ignore.”

Soon after the trip, the pair started dating, going strong for about a year and a half before agreeing to take a huge next step—looking at engagement rings. In sync as ever, the couple also decided that they’d each have an opportunity to propose when the time was right. For Roberta, the moment presented itself in July 2019, when she popped the question during a surprise family gathering at her mom’s house in Hingham. “It was very unexpected,” says Ayla, who soon followed suit. She asked Roberta to marry her a few weeks later during a trip to Buffalo, where she grew up. Since Roberta proposed in her childhood home, it seemed fitting that Ayla would do the same, the pair says.

For their wedding the following year, the couple originally planned to host a ceremony at the MIT Chapel, followed by a foodie-friendly reception at Alden & Harlow. That all changed this March, however, with the outbreak of COVID-19. At first, Ayla and Roberta thought they might be able salvage their plans. After all, their August nuptials were still five months away. But as the weeks passed, MIT cancelled its events, and indoor-gathering guidelines remained restrictive, the need for Plan B became crystal clear. “The numbers we had just weren’t going to work,” says Ayla, noting that the couple had invited 100-plus guests. “Also, the majority of our relatives live all over the country. The amount of travel that would need to take place was just not feasible.”

Disappointed but not deterred, Ayla and Roberta began thinking about a new way to celebrate their special day. Their solution? A small backyard wedding, livestreamed on Zoom from their new home in Weymouth. Although they initially considered an unplugged ceremony with just their immediate families and a rabbi, the couple soon realized the value in opening the festivities virtually to others. “We were talking with my childhood rabbi, and she suggested that our moment of joy could bring joy to other people,” Roberta explains. “Once we changed our minds about having a more intimate experience, it opened it up and we got to invite people who may not have made the guest list otherwise. We were surrounded by community and had this incredible day.” 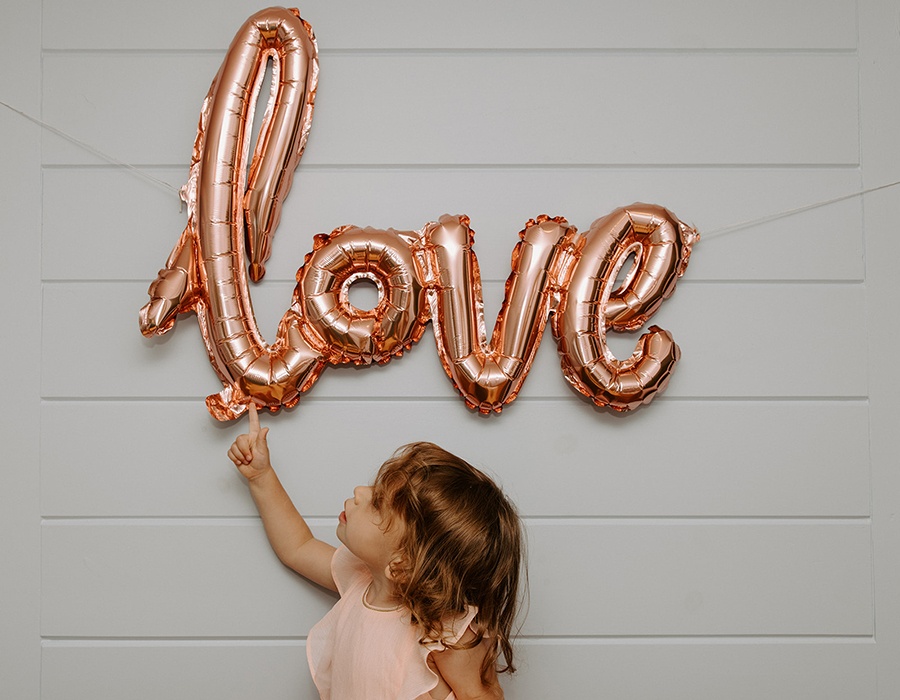 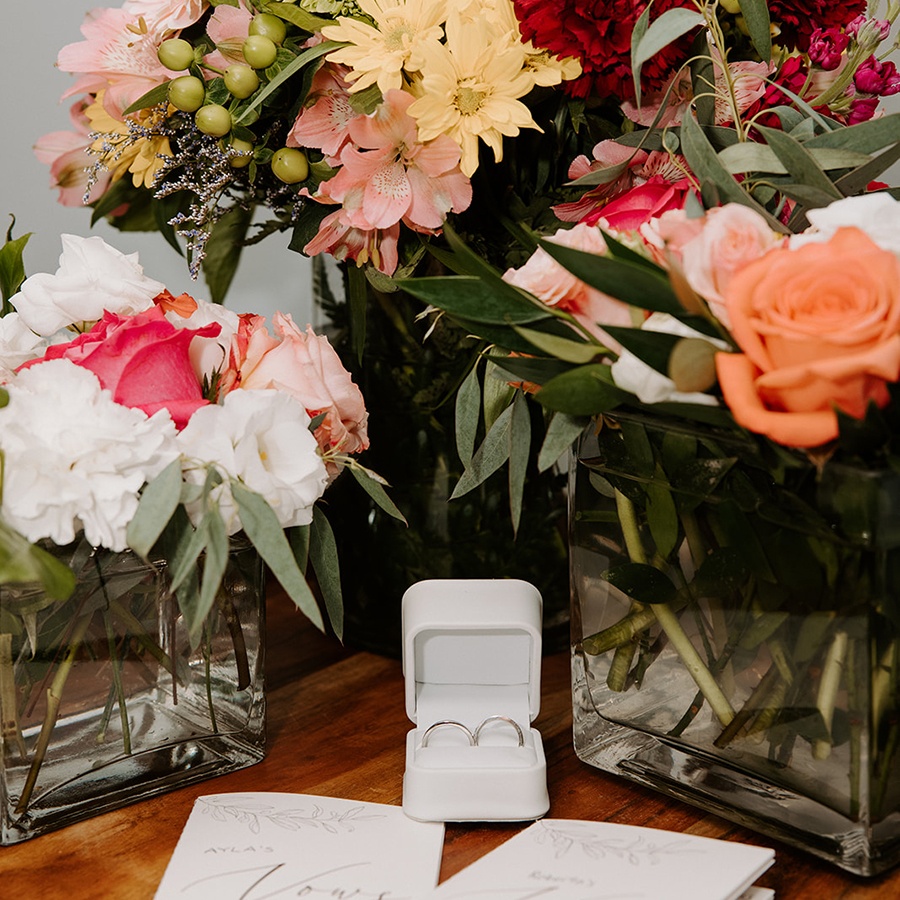 To create DIY bouquets, boutonnieres, and centerpieces for their big day, the brides called on Flower Moxie, which delivered freshly cut bulk blooms including ranunculuses, roses, and carnations. Ayla spent hours crafting the colorful arrangements alongside Roberta’s mom. “It was a nice way to spend the day before getting married,” Ayla says. 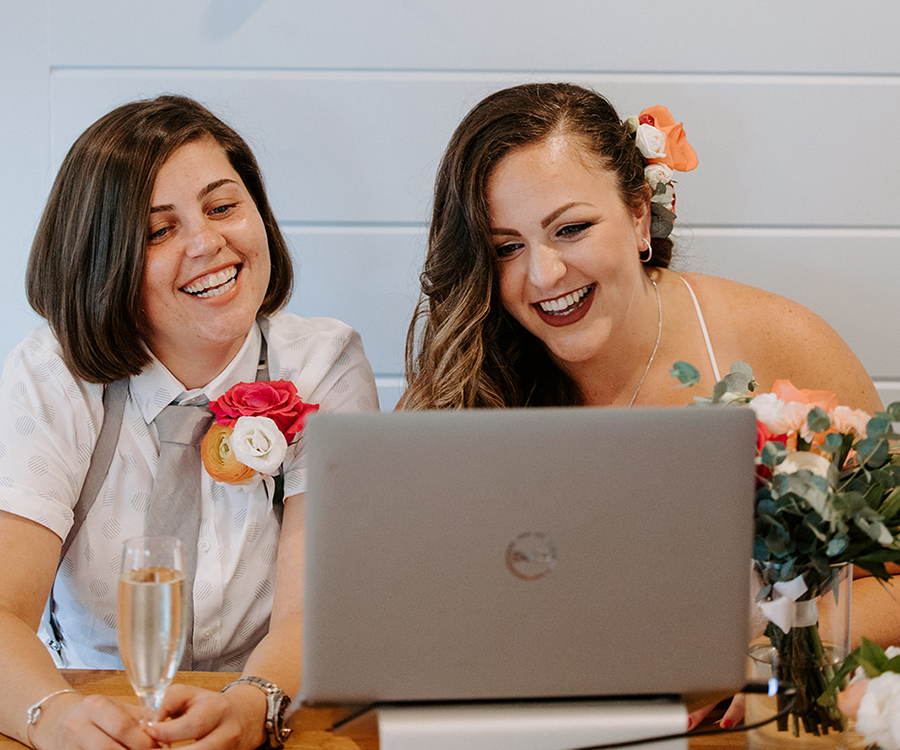 Guests attending virtually joined the couple for a pre-wedding Zoom call, which included blessings from rabbis, immediate family members, and friends. “We got to say hi to everyone and see who was in the Zoom room before we transitioned outside for our vows,” Roberta explains. 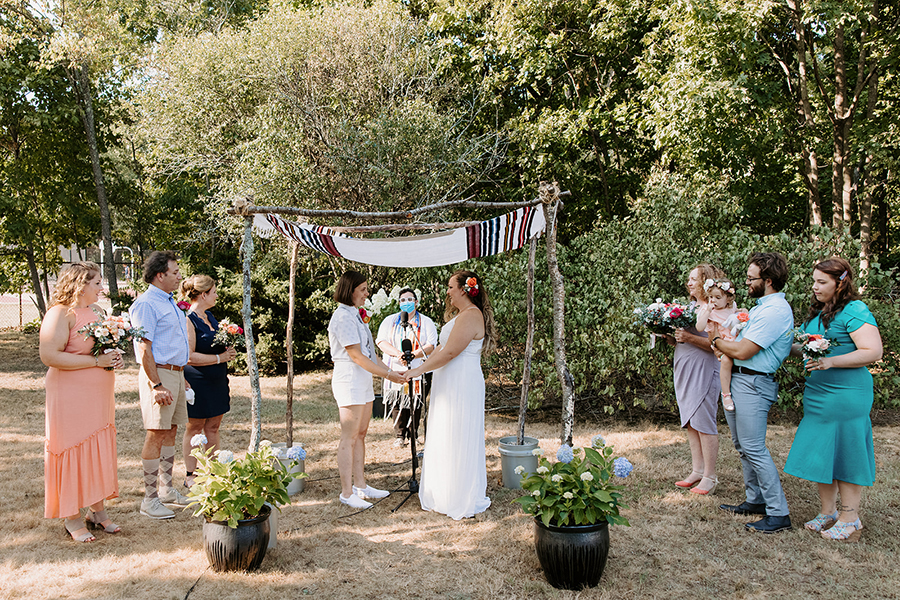 Joined by a rabbi and seven immediate-family members, Roberta and Ayla said “I do” under a chuppah made from foraged branches. 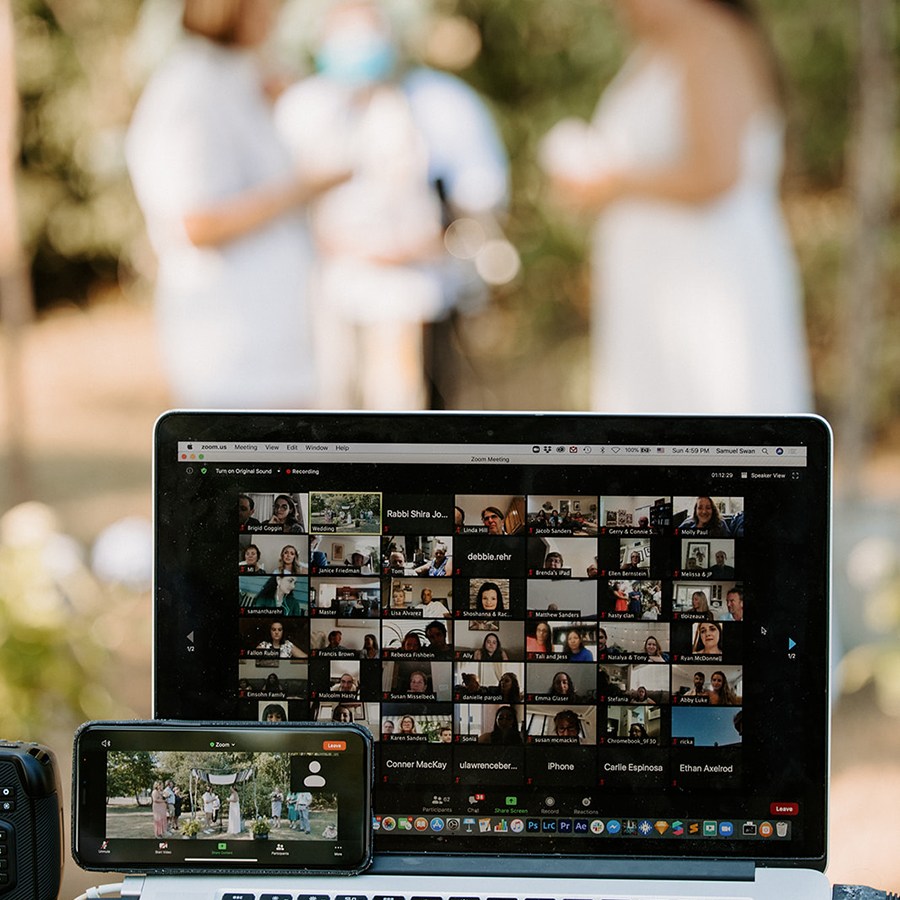 The couple estimates that some 150 guests tuned in for their “short and sweet” outdoor ceremony, livestreamed with help from videographer Sam Swan. 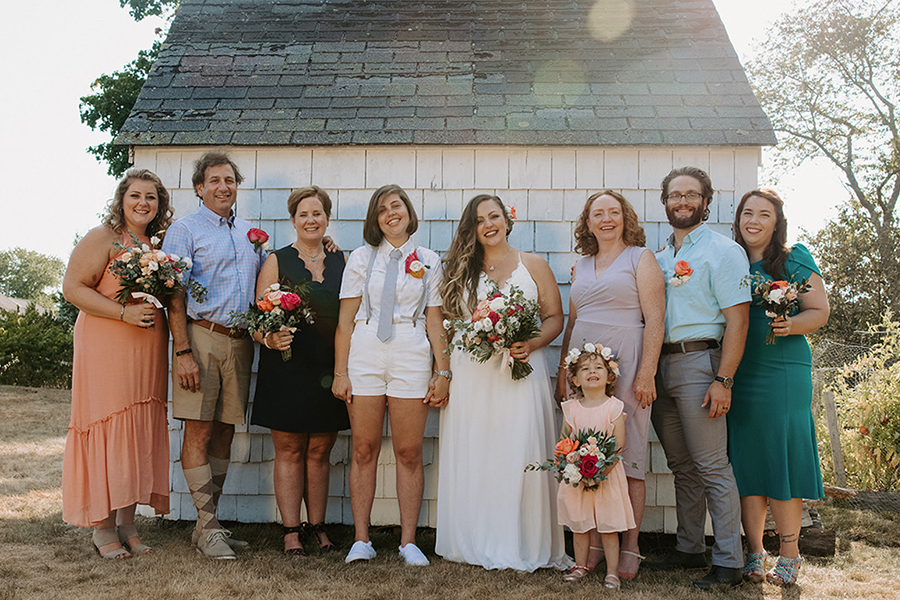 After the ceremony, the newlyweds posed for photos with their families. The couple’s gardening shed, once a chicken coop, offered the perfect backdrop. 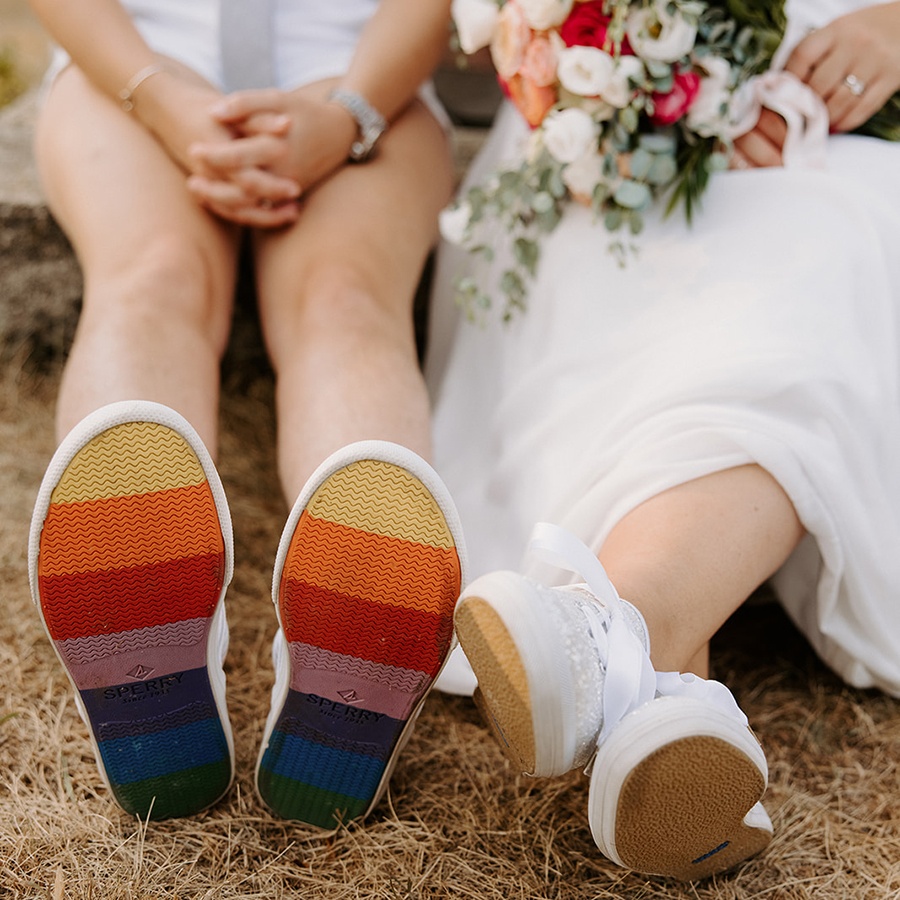 Both Roberta and Ayla paired their wedding-day looks with sneakers, specially purchased for the occasion. Roberta donned Sperry “Pride” kicks, while Ayla wore white Keds from the brand’s bridal line. 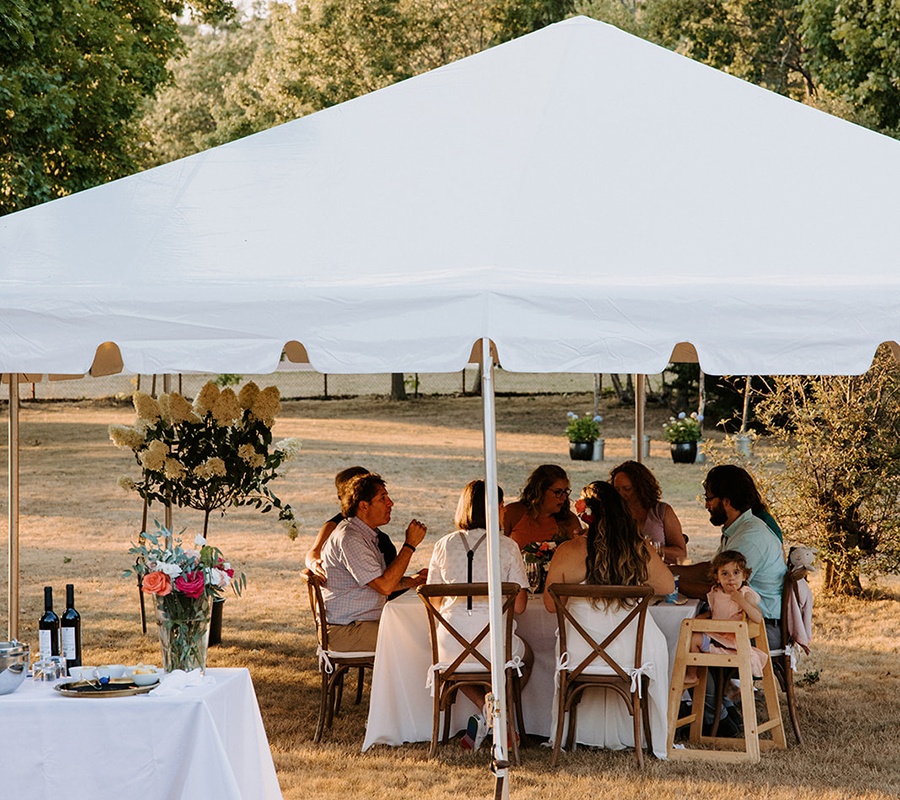 The couple hosted a four-course, tented dinner for guests, catered by Hingham-based Kate’s Table. Dishes included everything from heirloom-tomato salad to charred sirloin with fried shallots. “We really just got to sit under the tent and enjoy,” Roberta says. “The whole day felt like an actual mini wedding instead of something that just happened on a screen.” 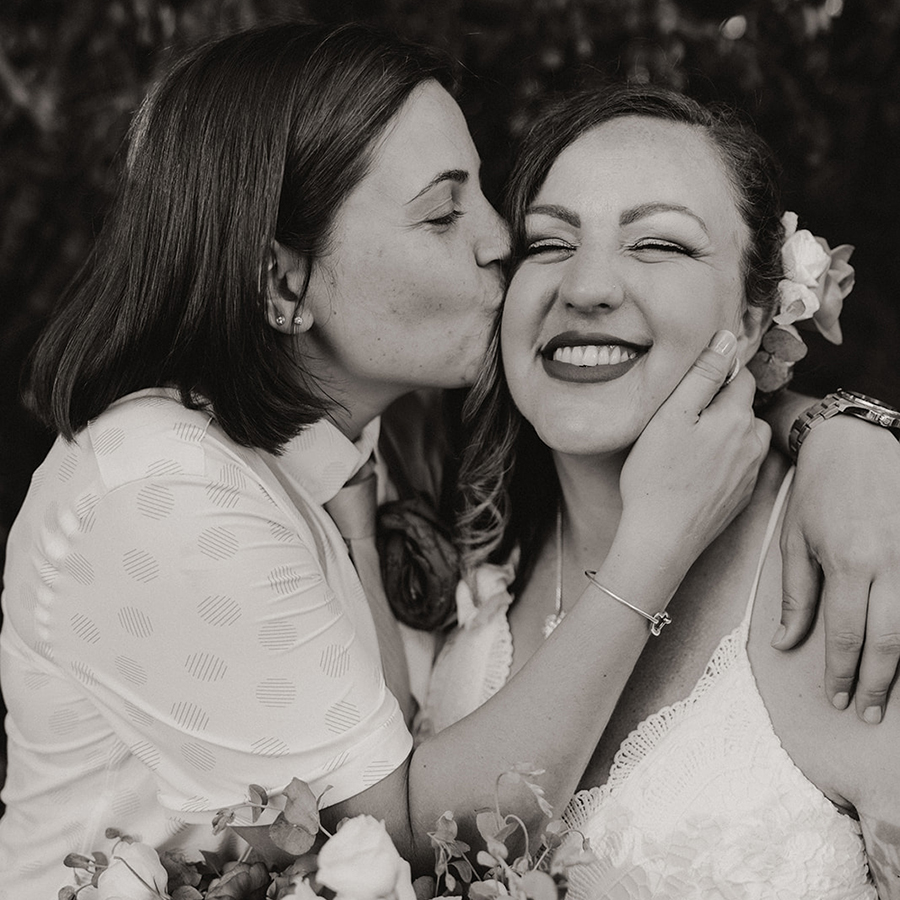 Although the couple plans to host a larger, full-scale celebration at a later date, they think back on their DIY backyard bash with nothing but fondness. “Being home on this emotional day was really special,” Roberta says.