Complete with ocean views, of course. 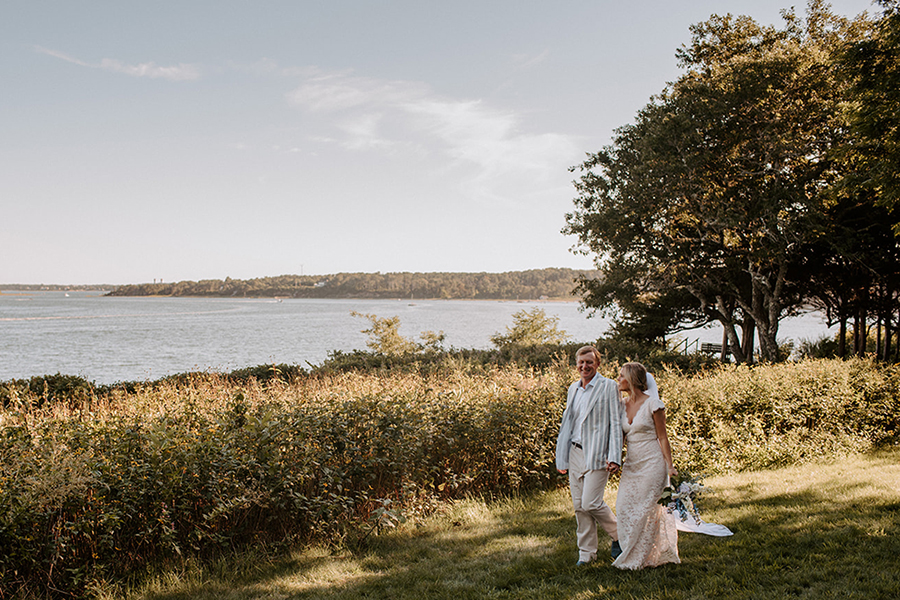 Kelly McCarthy isn’t much of a sports fan. So when her friend Emily invited her to attend a Cardinals game along with Emily’s brother and his roommate back in 2013, she seriously considered declining. “I was going back and forth all morning, and almost [said ‘no’] because I wasn’t feeling well,” the St. Louis resident explains. As it turned out, her decision to ultimately make an appearance was luckier than she ever could have imagined: It was there at the stadium that she first met Will Ferring, who was living with Emily’s brother at the time. A few days later, Will asked Kelly out to dinner—and the two have been together ever since. “I’m really glad I went [to that game],” Kelly says, laughing.

Fast forward to 2020, the couple—who had gotten engaged the previous year—was happily anticipating their March wedding when things took a dramatic turn. The coronavirus outbreak was quickly ramping up, and they soon realized the St. Louis celebration they’d planned was impossible. So, just five days before their anticipated walk down the aisle, they cancelled their nuptials and began targeting a new wedding date in January 2021. Still, something didn’t feel quite right. “We had planned on rescheduling but when we started talking about it and learned more about how long [the pandemic] would last… I thought, ‘What if we just did something really small,'” Kelly recalls. “I had always wanted a small wedding, and our [original celebration] had turned into this huge, fancy event. I thought, ‘Let’s just do the opposite.'”

So, with the blessings of their families, Kelly and Will hatched a new plan, dreaming up an intimate 40-person wedding to be hosted in early September at Will’s family home in Orleans. “We go to the Cape every summer, and it’s one of those places that we just love,” Kelly says. “It’s really special.” And although the ensuing soiree bore little resemblance to what they’d planned for their St. Louis affair, both bride and groom couldn’t be happier with the results. “I think it was kind of a blessing in disguise because it’s probably the wedding that we really wanted originally,” Kelly says. “Obviously, I wish every person that we [originally] invited could have been there, but honestly it turned out perfectly.” 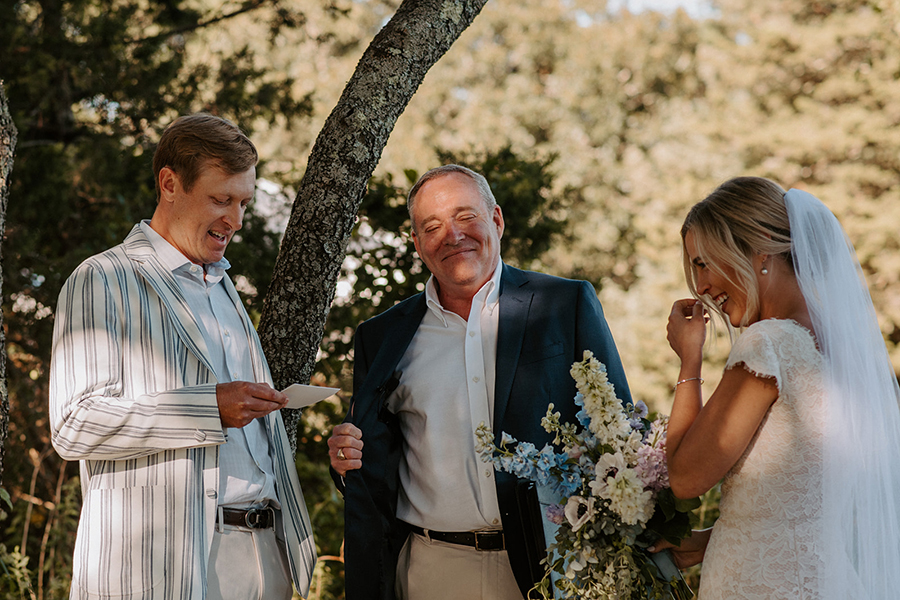 Kelly says that the ceremony, officiated by a family friend, was among the most “meaningful and special” parts of the day. “When you’re planning a wedding, it can get out of control and become about everything other than getting married,” the bride says. “Cancelling the first [plan] brought us back down to earth and put it back in perspective.” 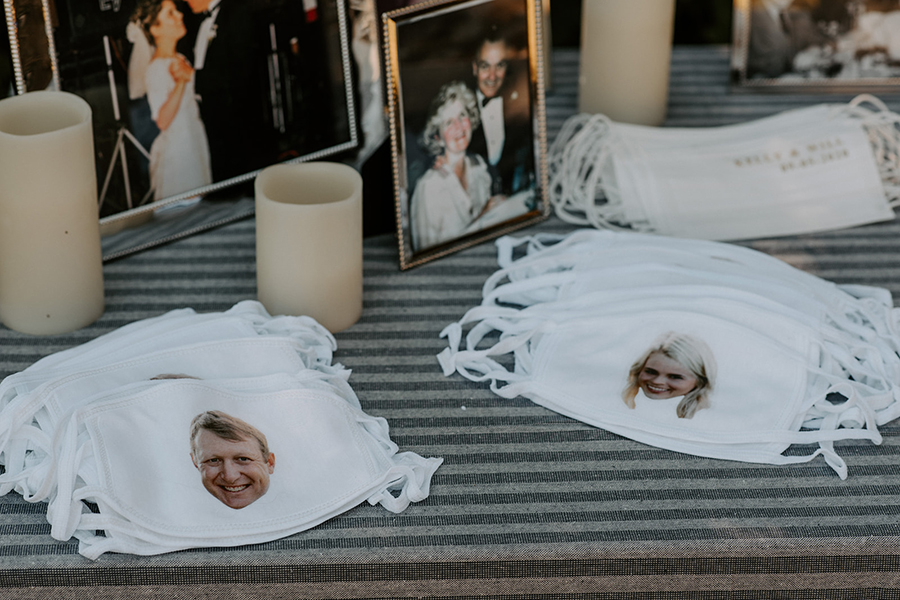 “We were pretty conscious of wanting to have a COVID-safe wedding,” says Kelly, who customized these face masks using iron-on transfer paper. Guests, all of whom tested negative for the virus before attending the party, scooped them up from a special table, adorned with photos of the couple’s parents and grandparents on their wedding days. 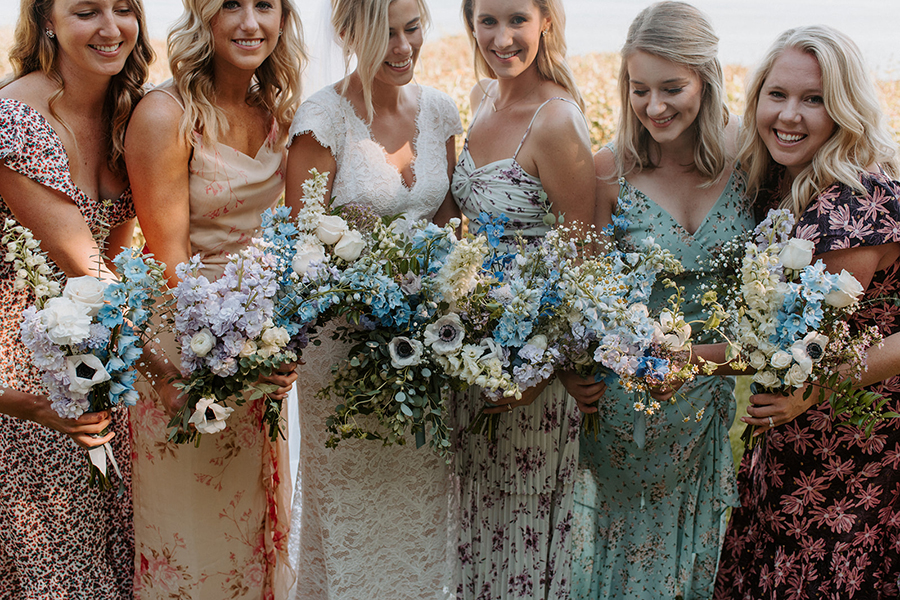 Using blooms such as anemone, scabiosa, and delphinium, Kelly and her bridesmaids each crafted their own bouquets for the ceremony. The bride created the floral arrangements displayed on the dinner tables, too. 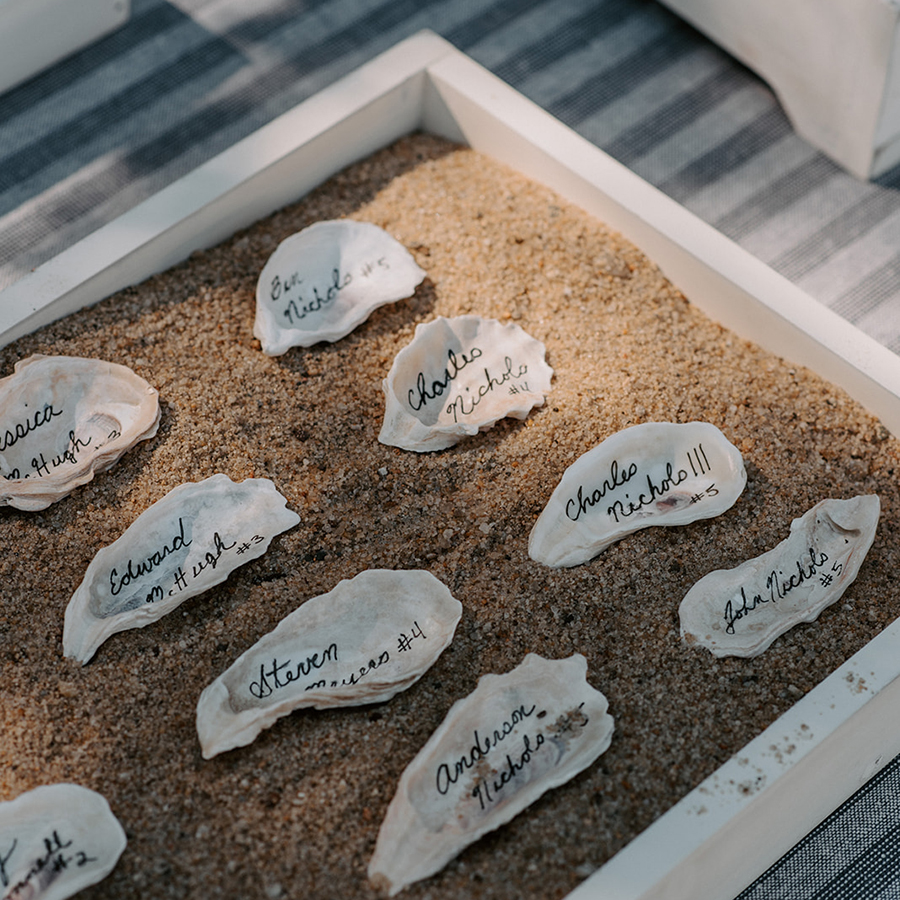 Pinterest offered inspiration for the couple’s escort cards, made from muscle shells that Kelly bulk-ordered from Etsy.”My mom wrote everyone’s name and table number on the inside,” the bride explains. 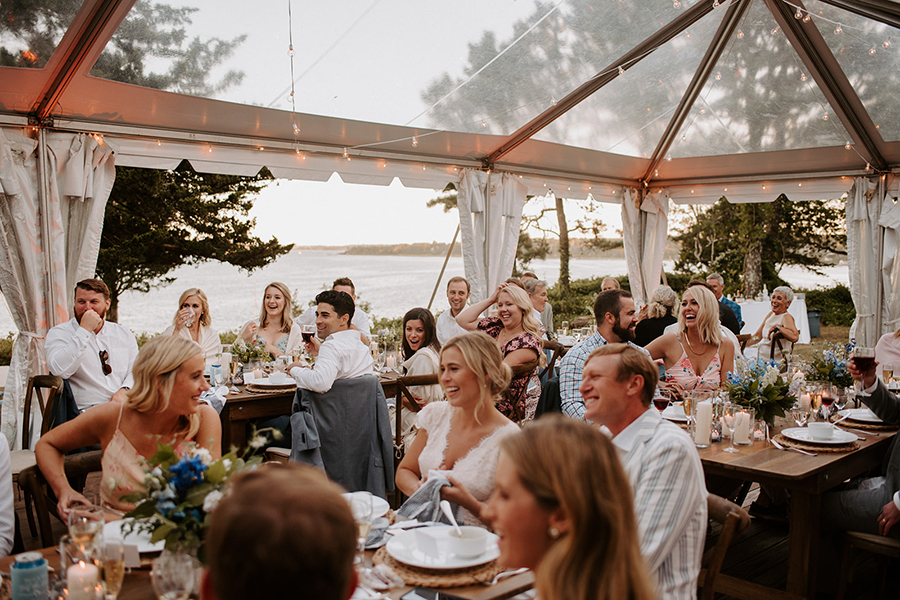 The couple hosted their reception beneath a clear-top tent, which showcased views of the ocean and surrounding greenery. 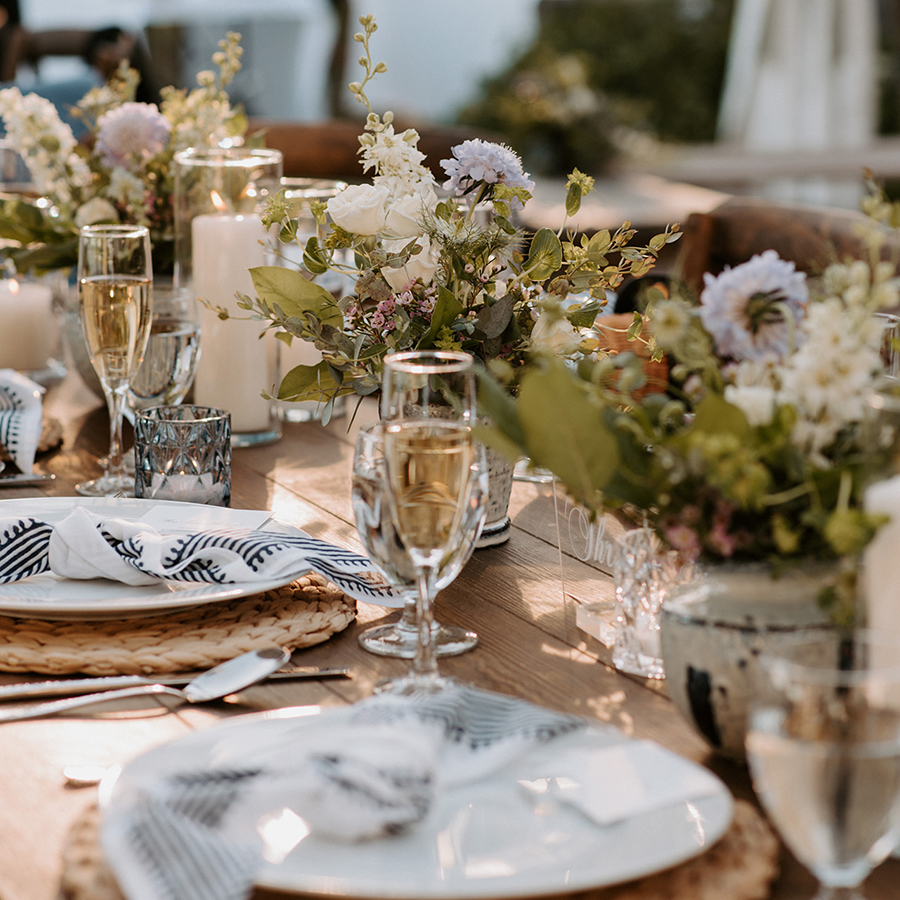 Kelly designed the tablescapes using a mix of rented and purchased items, including woven-hyacinth placemats from Koyal Wholesale. The napkins, a gift from Will to Kelly, hail from Serena & Lily. 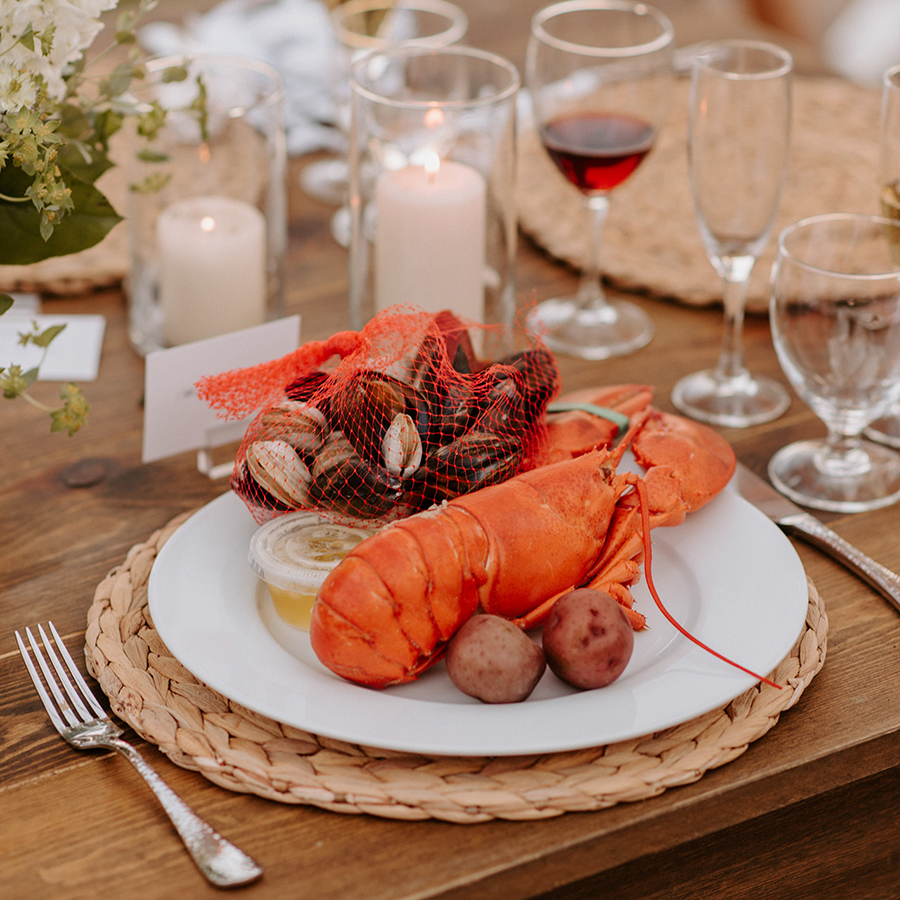 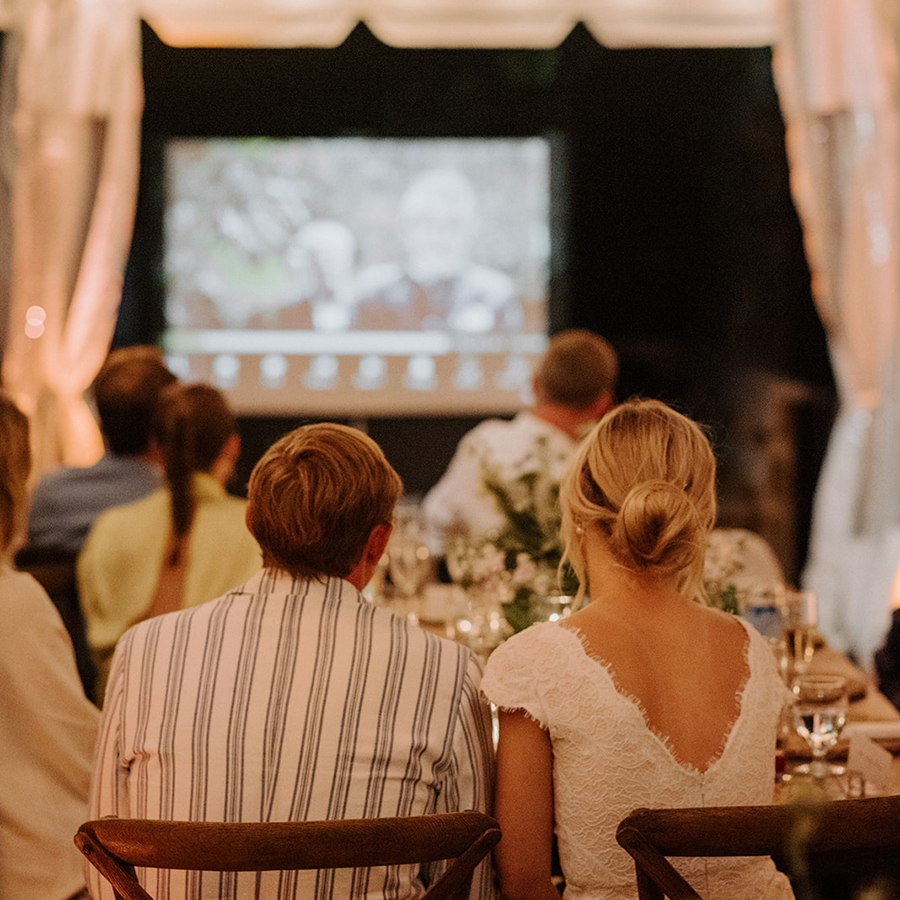 During the reception, the couple viewed a surprise video message from Kelly’s uncle John, who lives in London. John was initially supposed to serve as the couple’s officiant, but could not attend due to travel restrictions. “It was a bummer that he couldn’t be there, but that was a really nice thing,” the bride says. “It’s the sweetest video I’ve ever seen.”