This Seafaring Couple Tied the Knot Aboard a Family Yacht

Doesn't get more luxurious than that. 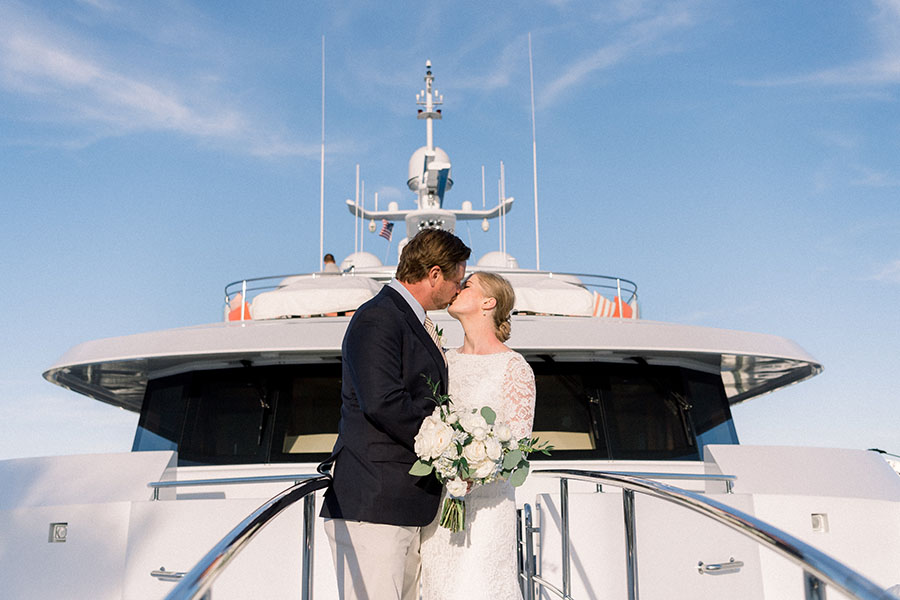 Mimi Rogers and Scott Oliver first met in 2018 in the Bahamas, where Scott was working as a yacht captain and Mimi was vacationing with friends. Nothing short of a whirlwind, their chance encounter began with a drink at a dive bar and ended with a sunrise walk on the beach. “It was one of those crazy nights that you only read about or watch in movies,” Mimi says. The pair figured it would be the last time they saw each other. But a few days later, while hanging out on her grandparents’ yacht, Mimi noticed Scott on a nearby boat in the marina. Her friends shouted her phone number across the water to Scott, who soon sent Mimi a text message. “We met up again that night and the rest is history,” she says.

For their wedding two years later, the couple initially planned a gathering in Aspen, where Mimi had lived as a child. But as the date approached and the COVID-19 pandemic continued to intensify, they ultimately decided to host a small, but no less special, affair aboard Mimi’s grandparents’ yacht, appropriately named Time for Us. After all, not only had the craft helped the pair reconnect after their whimsical first meeting, it also served as the backdrop for their engagement in 2019. As for where to dock the boat, the bride and groom trained their sights on Swain’s Wharf on Nantucket—an island Scott grew to love during his years-long stint as a captain for a local country club. “It was dreamy,” Mimi says of the ensuing soiree. “I couldn’t have asked for a more perfect beautiful way to celebrate us and who we are.” 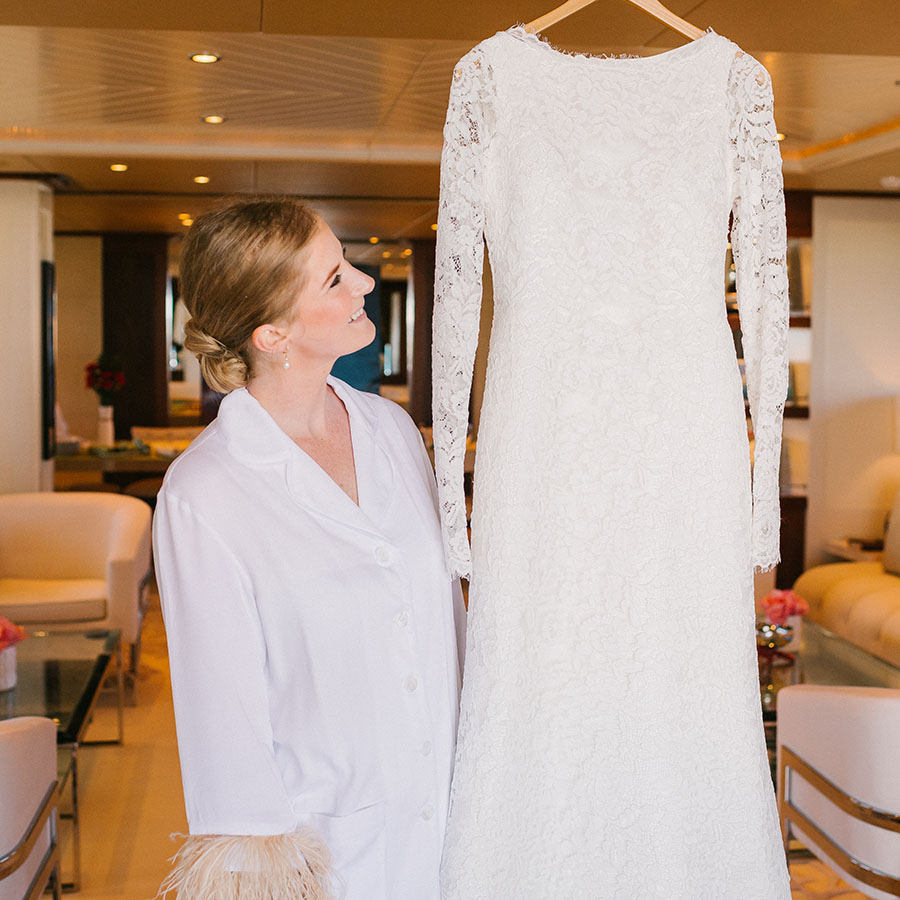 After searching for wedding dresses with her mother and grandmother, Mimi decided to have one custom-made instead. Her lacy gown, dreamed up by Italian designer Le Spose di Giò, featured a 3-foot train that was bustled for the reception. 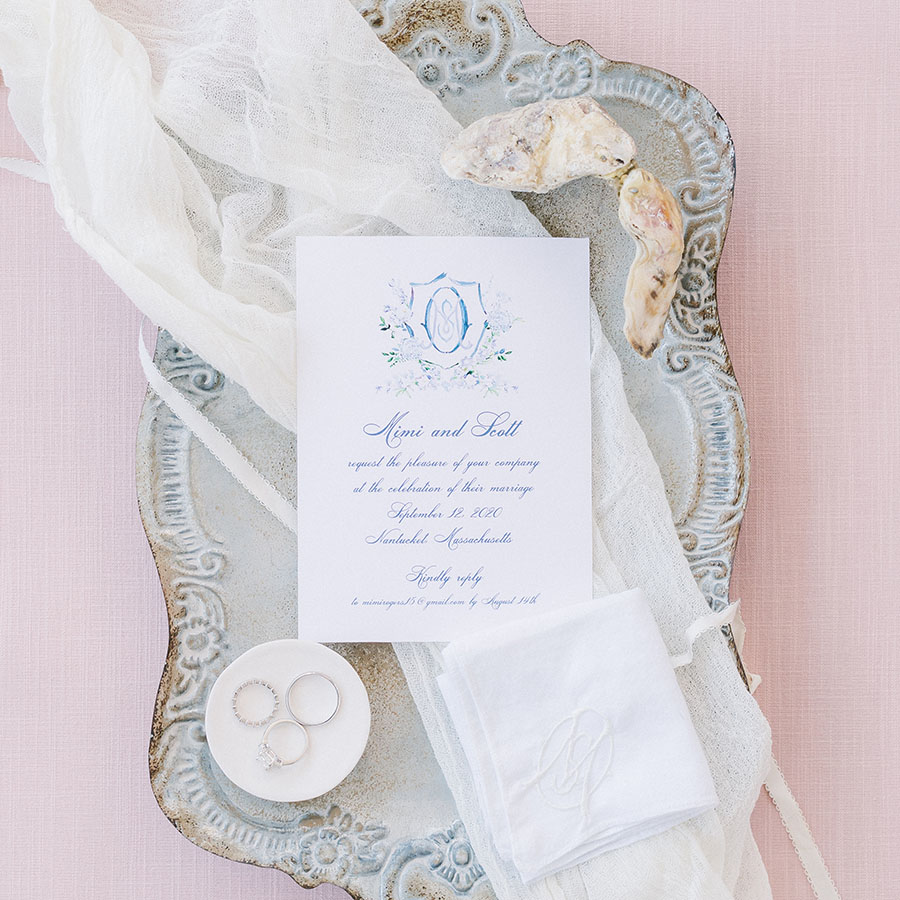 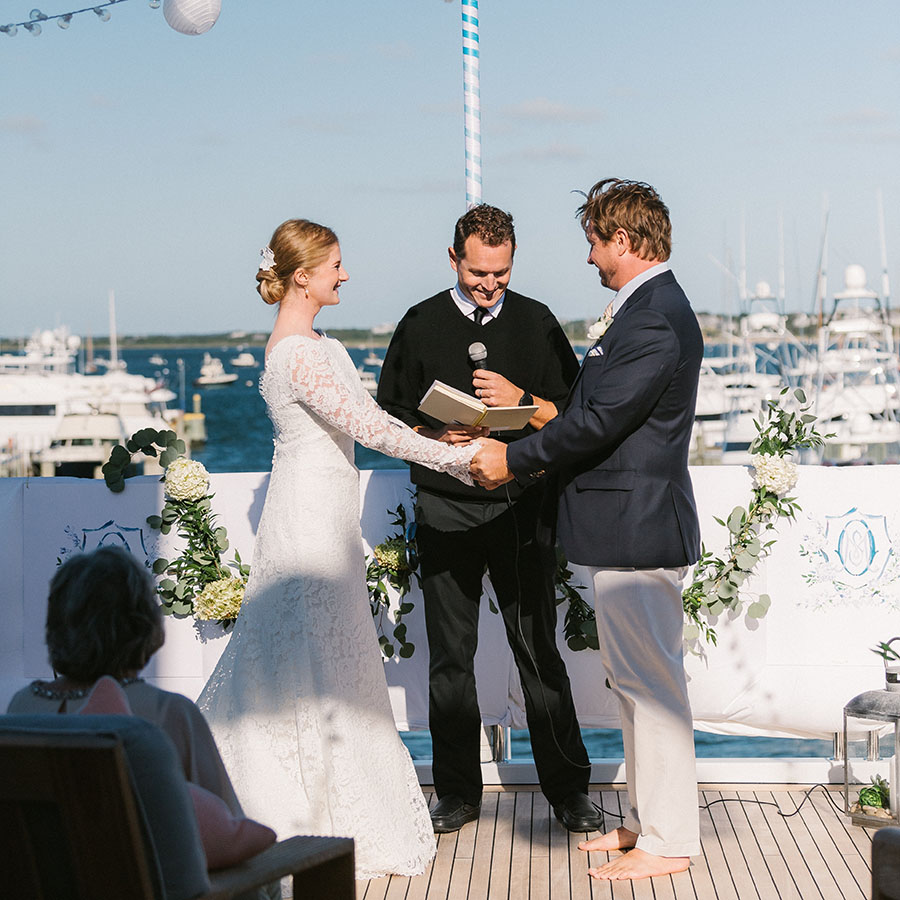 Having commandeered the family’s yacht for many years, Captain Scott Ellison was an easy choice when it came time to select an officiant for the couple’s ceremony, which featured original vows and stories detailing Mimi and Scott’s connection to the boat. 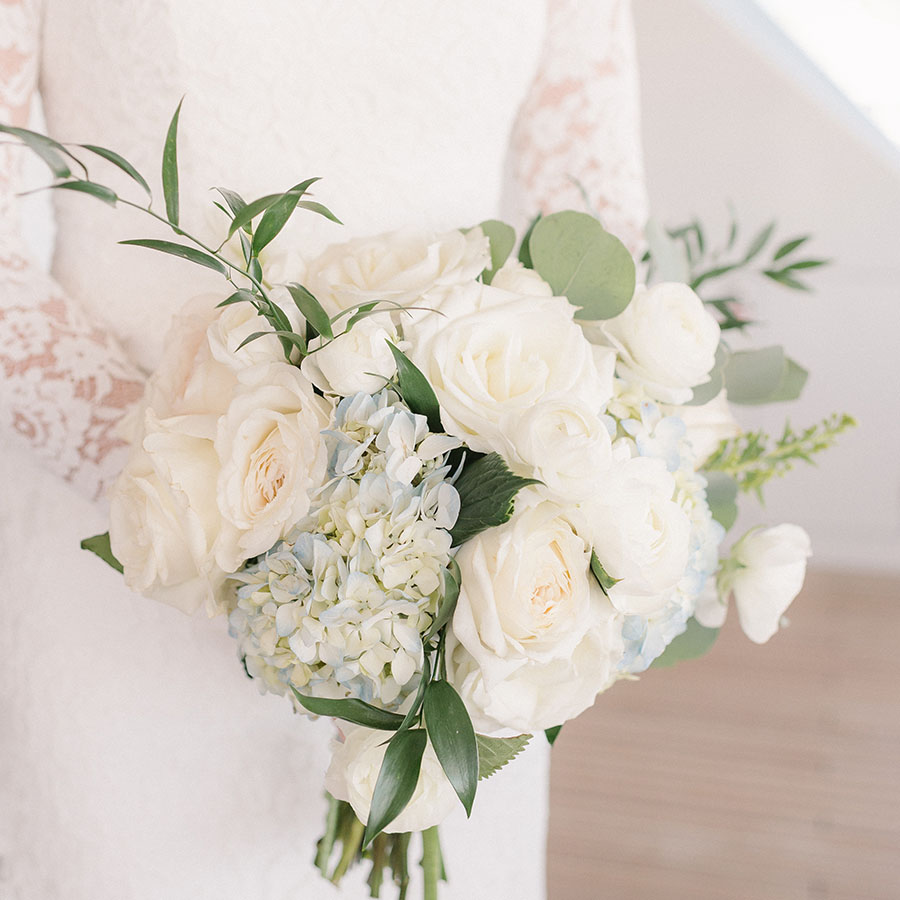 Mimi’s bouquet included bunches of roses, hydrangeas, ranunculus, and lilies.  The florist, who is a close childhood friend of the bride, was given free rein while creating the arrangements for the event. “I told her to surprise me,” Mimi says. 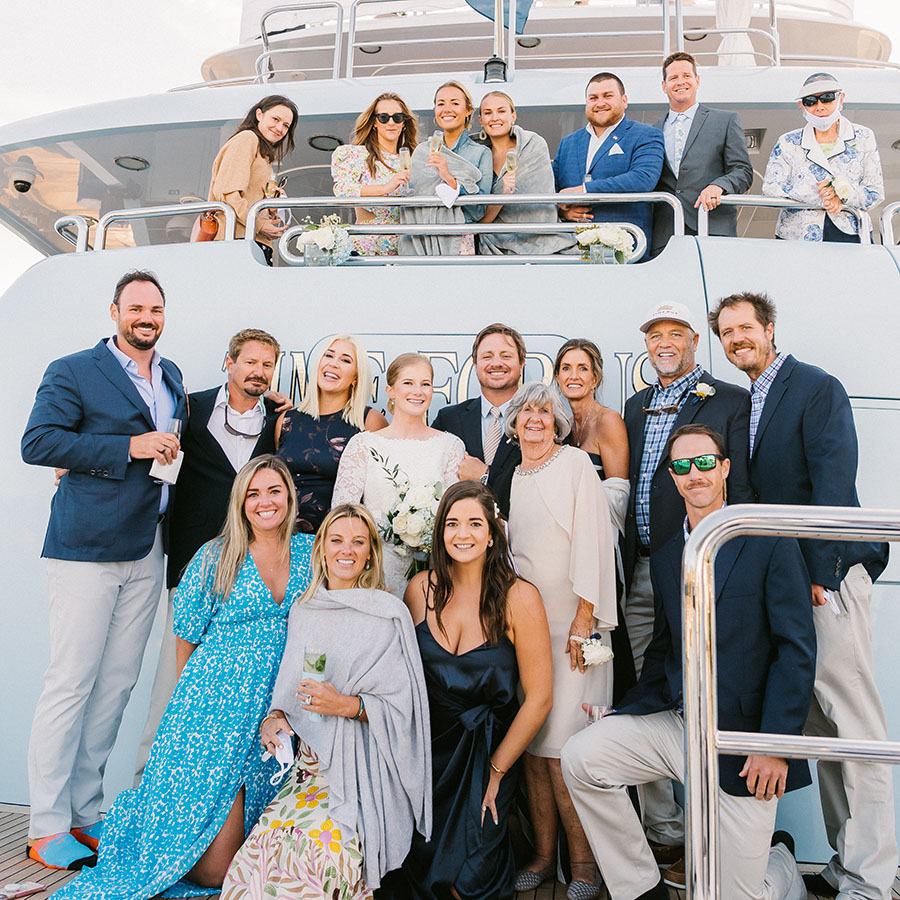 In keeping with COVID guidelines as well as the boat’s capacity limits, only 18 guests—including close family and loved ones invited to be part of the original wedding party—attended the festivities. 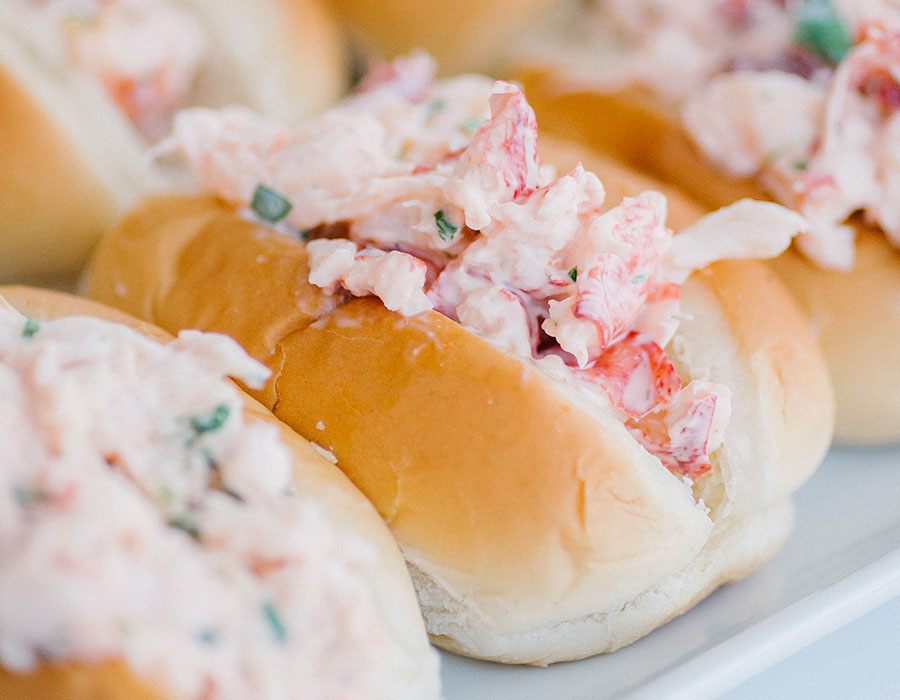 The group noshed on lobster rolls, oysters, grilled cheese, and chicken tenders, among other tasty treats. “It was all the best junk finger food, which was awesome,” Mimi says. “I loved it.” 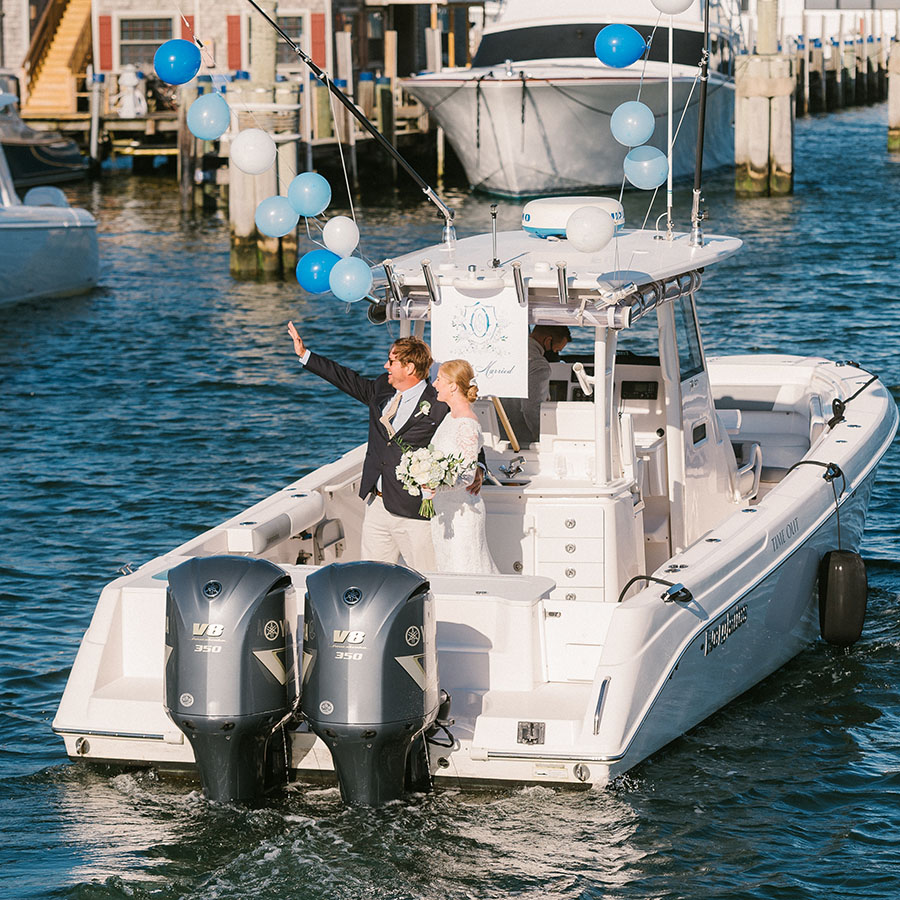 After the ceremony, the newlyweds boarded a smaller boat for a quick tour of the harbor while onlookers on other vessels sounded
their horns and cheered.