This Somerville Couple Hosted Their Dream Nuptials at Olio in Peabody

The two teachers customized Jewish traditions to involve both families on their big day. 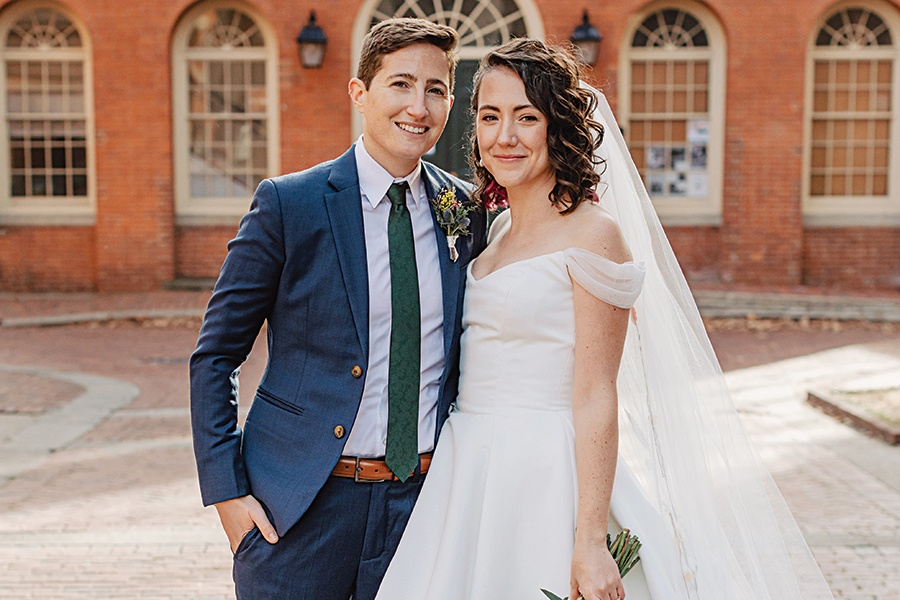 For teachers Jessie Belfer and Rose Barrett, rescheduling a wedding during a pandemic presented them with a lesson in resilience. After COVID squashed their plans for a three-day extravaganza at a summer camp in May 2020, the couple contemplated settling with their small replacement Zoom wedding instead. “Jessie and I had known through the whole planning process that we wanted to have a [big] wedding because celebrating with our community and loved ones was really important to us,” Rose says. So a year and a half and several cancellations later, the Somerville-based couple persisted and finally had their dream nuptials at Olio in Peabody, where Rose and Jessie’s 200 guests gathered in its renovated industrial-chic space. To make their ceremony intimate and personalized, Rose and Jessie customized Jewish traditions, such as the reading of the “seven blessings,” to involve both families in their big day. “It was very special to have everyone all around us,” Jessie says of their long-awaited, in-person celebration. 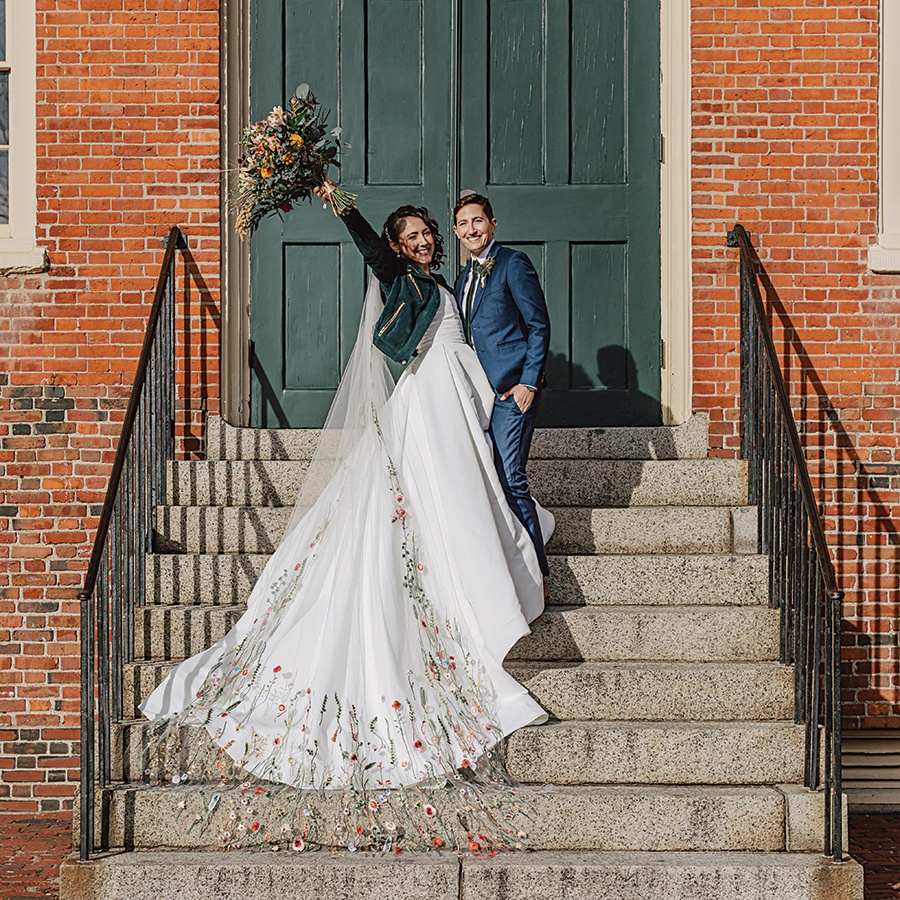 Rose knew from the start that she wanted to stun with a statement veil—in this case, a custom, hand-embroidered piece, complete with pops of colorful florals. 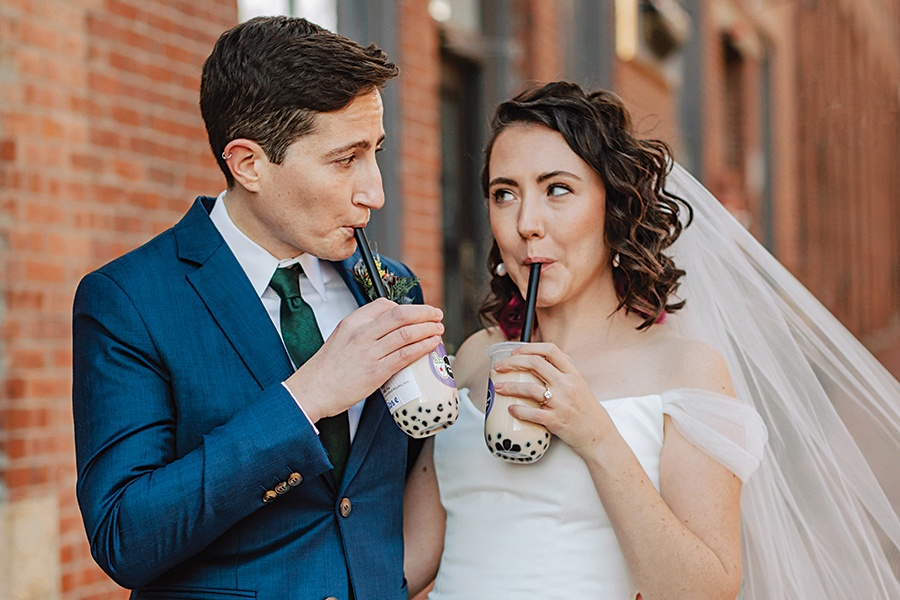 Because Rose had already described her dress in detail to Jessie ahead of the wedding (“Rose is not good at keeping secrets,” Jessie jokes), she wanted to surprise her with something else during their first look: boba tea, one of the couple’s favorite after-school treats. 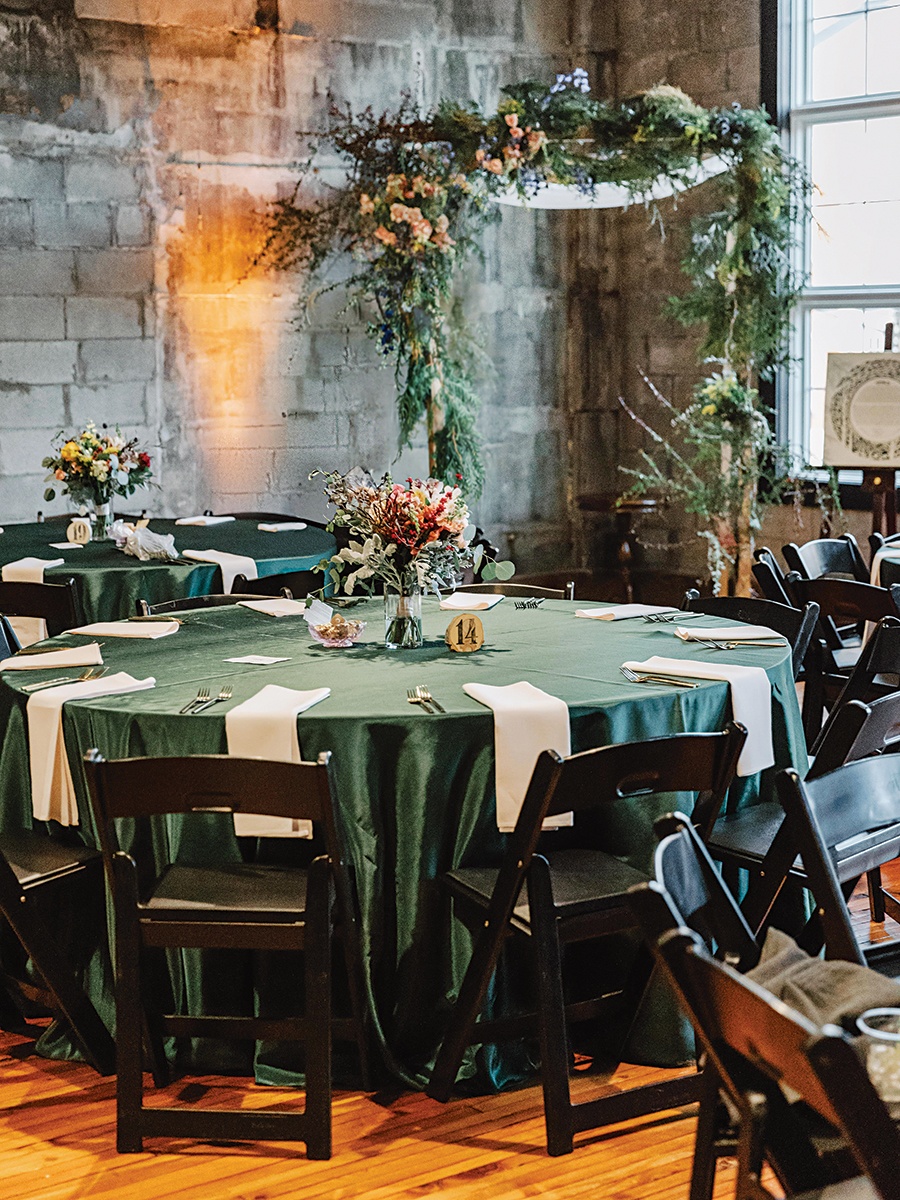 Woodland-inspired florals brought the couple’s love for the outdoors inside of Olio. “The cedar branches and pine needles made it feel more forest-y and camp-y, which was nice,” Jessie says. 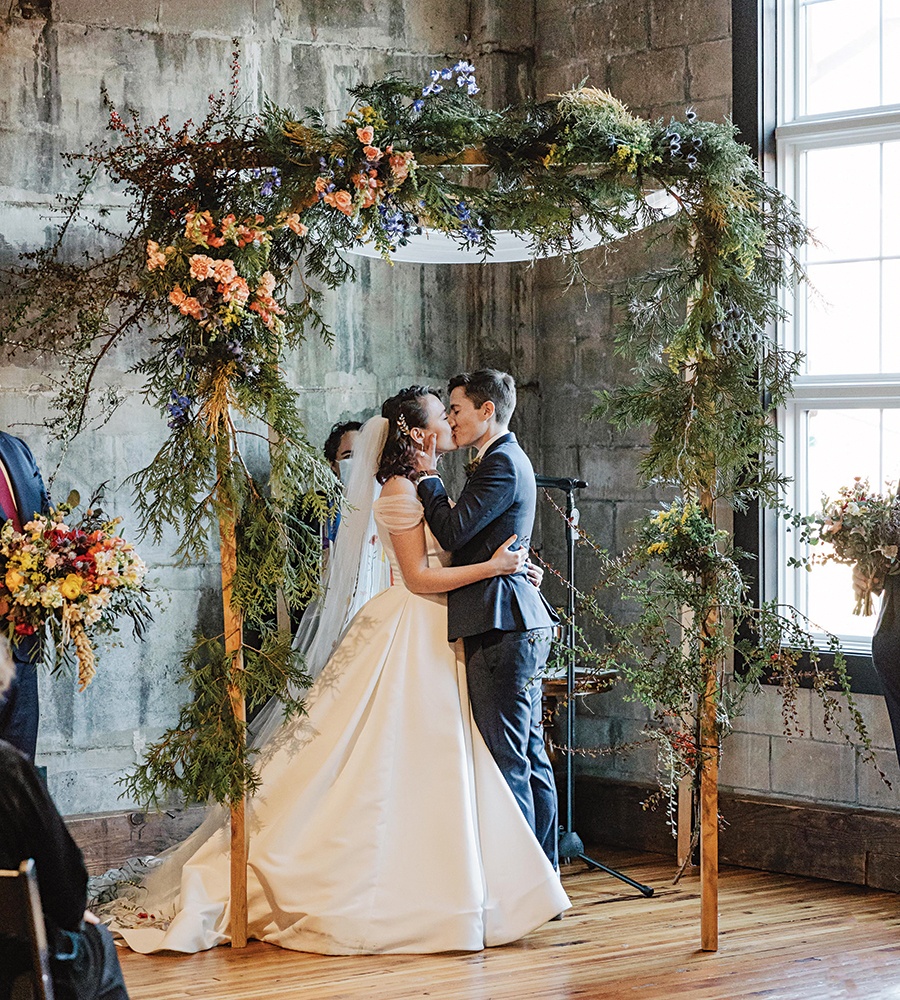 Traditionally signed in private, the couple’s ketubah—a Jewish marriage contract—featured updated clauses customized by Rose and Jessie that were read during the ceremony. 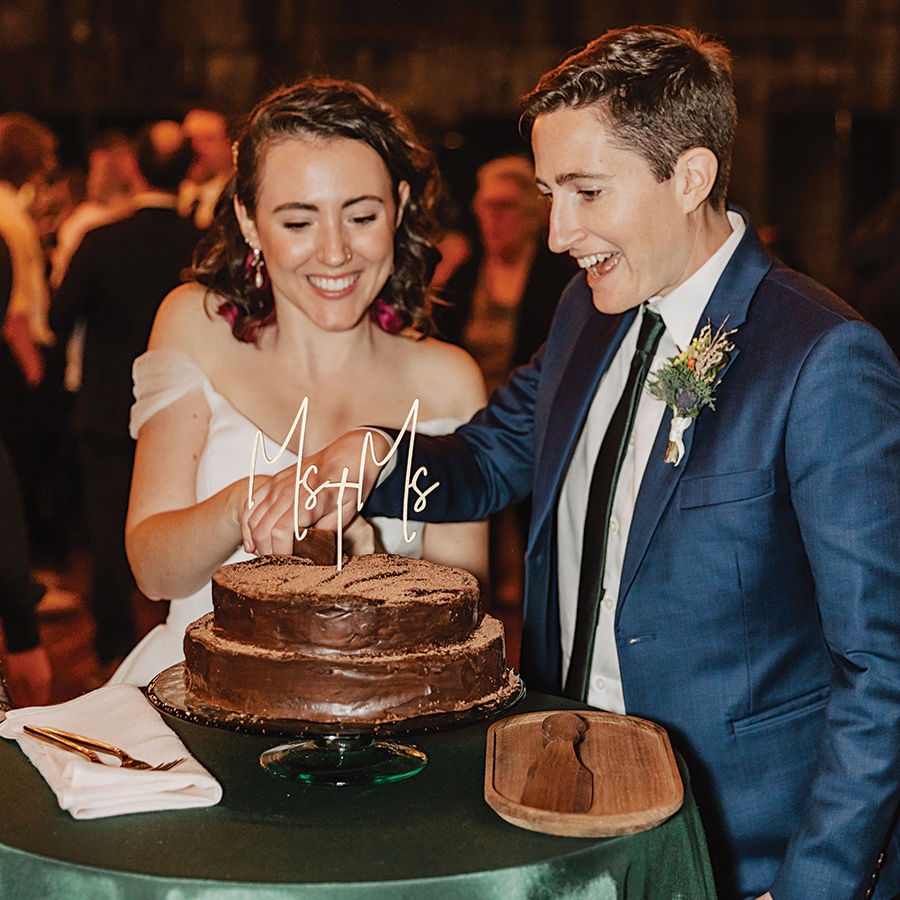 Rose’s and Jessie’s moms got together before the big day to each bake a layer of the couple’s two-tiered chocolate wedding cake. 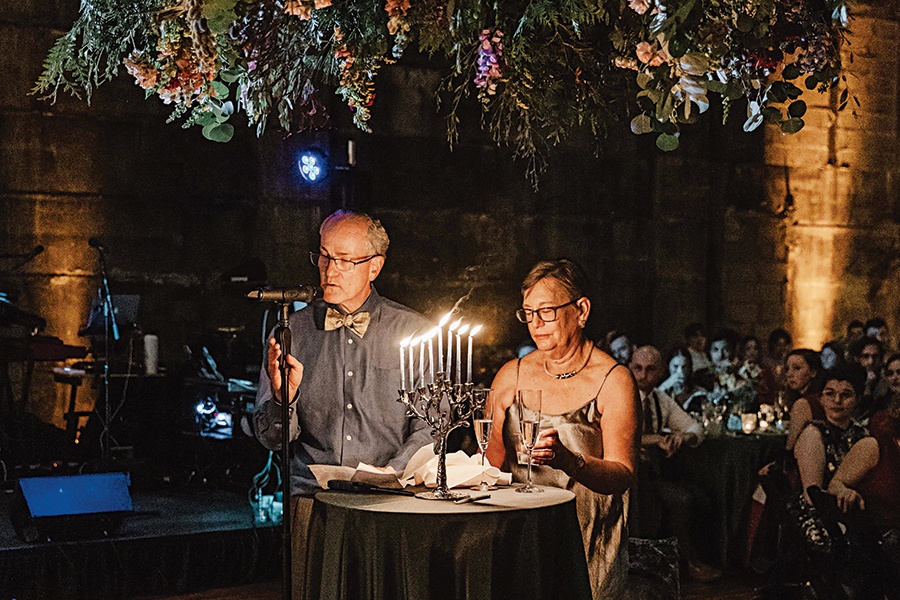 To pay homage to their December nuptials falling auspiciously during the Festival of Lights, the couple incorporated sufganiyot (Jewish jelly doughnuts served during Hanukkah), a menorah lighting, and dreidels at each table into their reception. 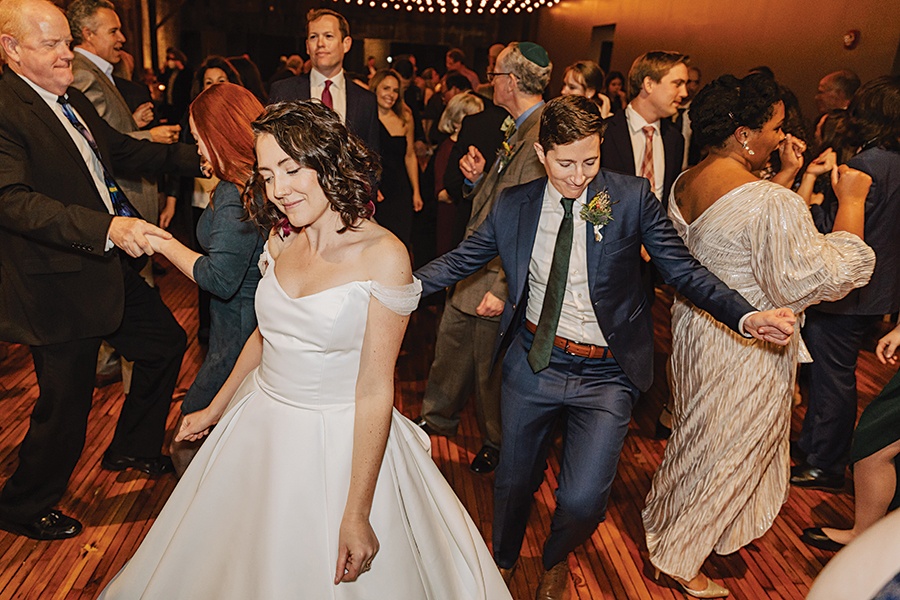 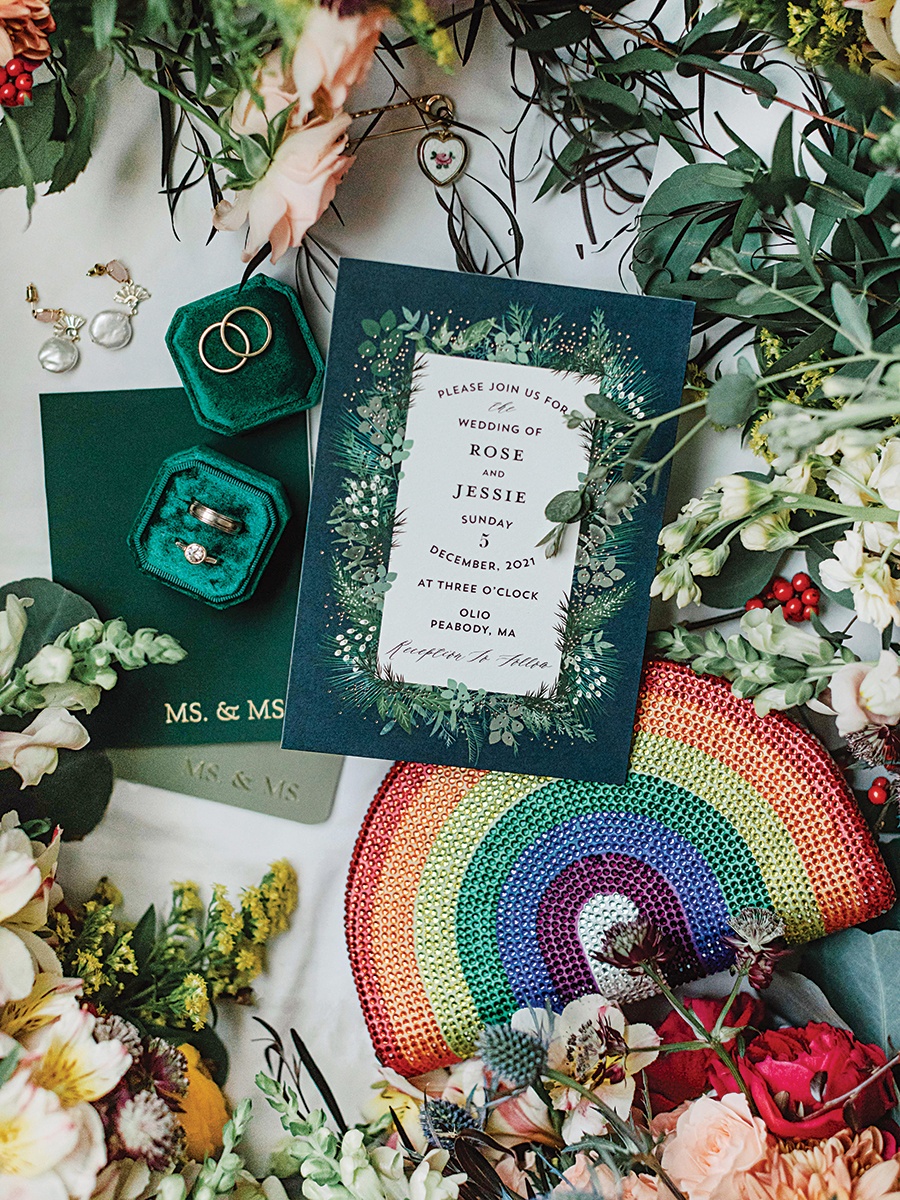