Three Wedding Plans Later, a Ceremony Unfolds on the Coast

The couple brought a "coastal gay disco" vision to their wedding in Gloucester. 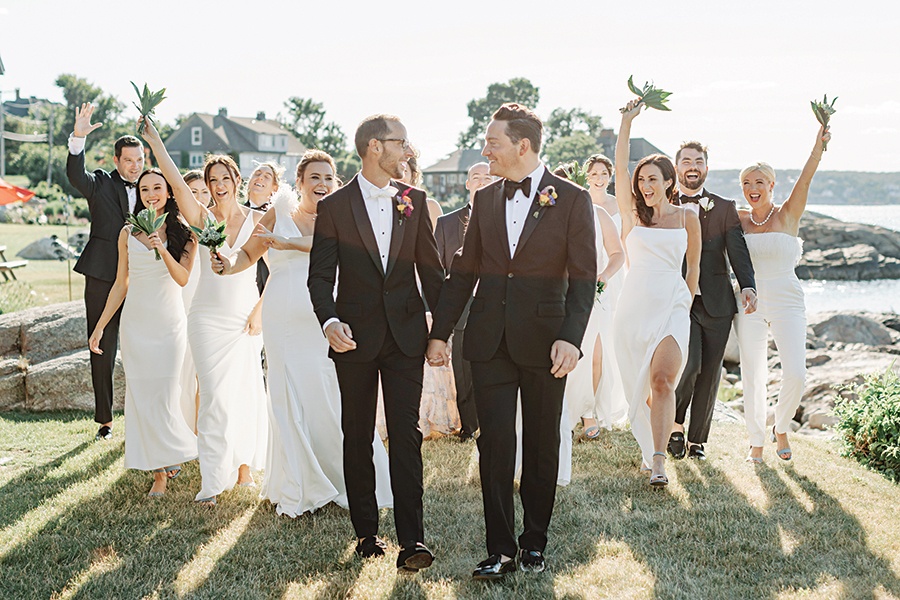 After getting engaged in December 2018, Bryan Tatro and Sean Patrick Gibbons planned not just one wedding, but four. First, there was the wedding they set for July 2020—a classic coastal celebration at the Beauport Hotel filled with white florals and greenery. Then COVID hit, and they decided to postpone their wedding until September 2021, but in the meantime, do a small legal ceremony in a park near their home in the South End with their families. When their new date rolled around, though, COVID precautions were still strict, so they postponed their wedding once again to the following July. “We were hoping by then it would be all good,” Sean recalls.

In the end, it was everything they’d hoped for and more. “It was what we always wanted, but because we were already married, there was a sense of freedom,” Sean says. Case in point: The couple decided to add a hefty dose of flair to the event they originally planned in the form of colorful and eye-catching florals. “The new vision was coastal gay disco,” Sean says. “We wanted people to feel like they were at a really elegant gay bar on the coast.” 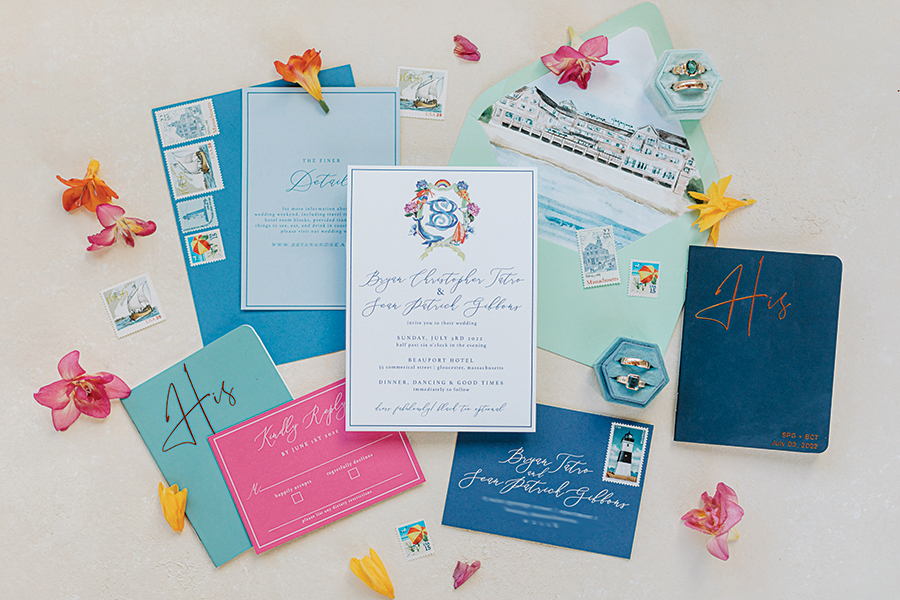 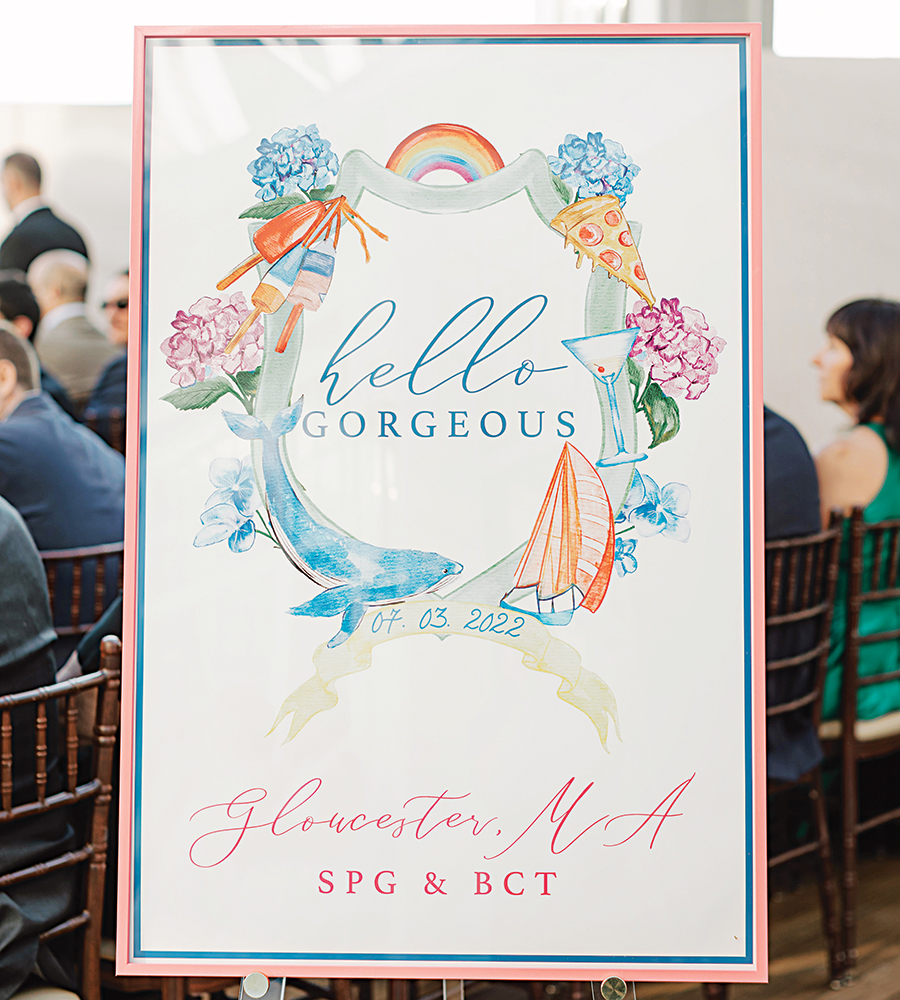 Bryan and Sean’s welcome sign was inspired by the musical Funny Girl, a favorite of Sean’s. “It opens with Barbra Streisand saying ‘Hello gorgeous,’ and it just stuck with me that it needed to be there,” Sean says. 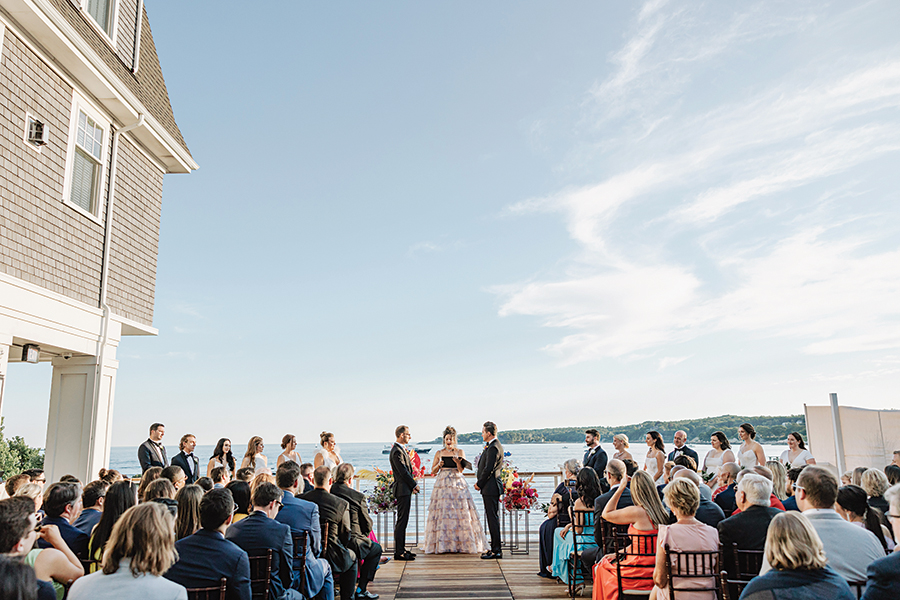 The couple’s best friend, Caitlin, officiated their ceremony. “She’s Sean’s best friend from childhood who has now become my best friend, so I said I wouldn’t allow her to only be on his side, and we came up with the idea to put her right in the middle where we could share her,” Bryan explains. 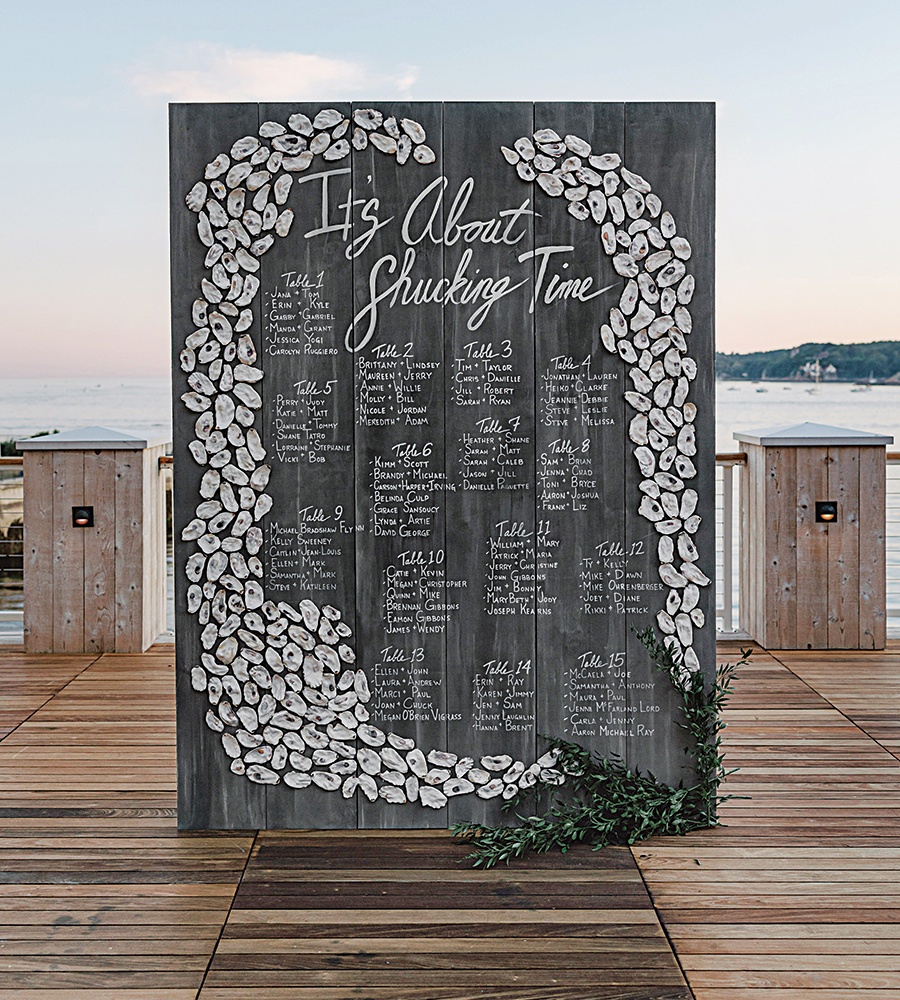 The grooms enlisted help from their set-designer friend Jenna McFarland Lord to bring to life a playful seating chart adorned with oyster shells and greenery. 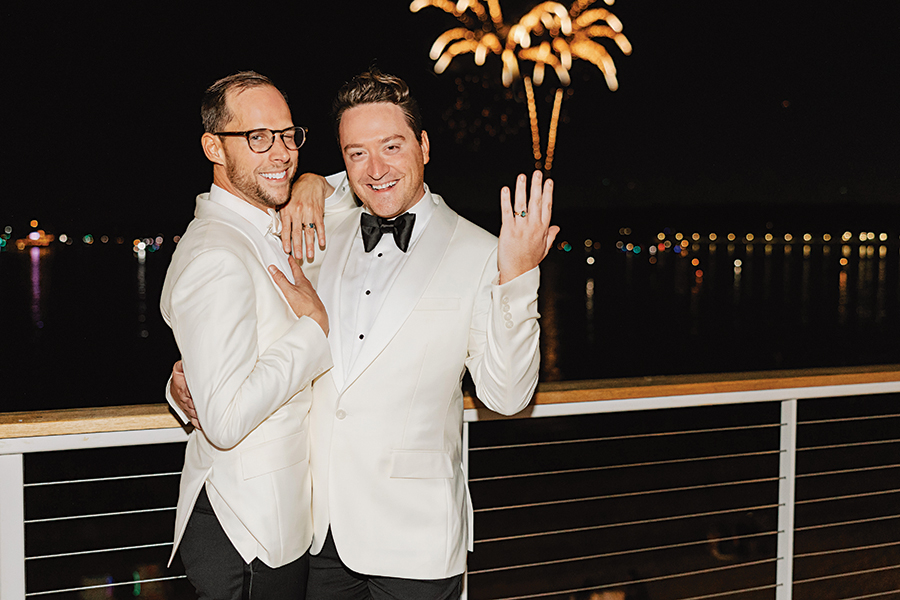 Bryan and Sean’s wedding reception featured an enchanting and unexpected firework display, thanks to the town of Gloucester’s Independence Day celebrations. “It was the icing on the cake. A lot of guests were like, ‘Did you plan these?’ and we were like, ‘Yes!’” Sean says with a laugh. 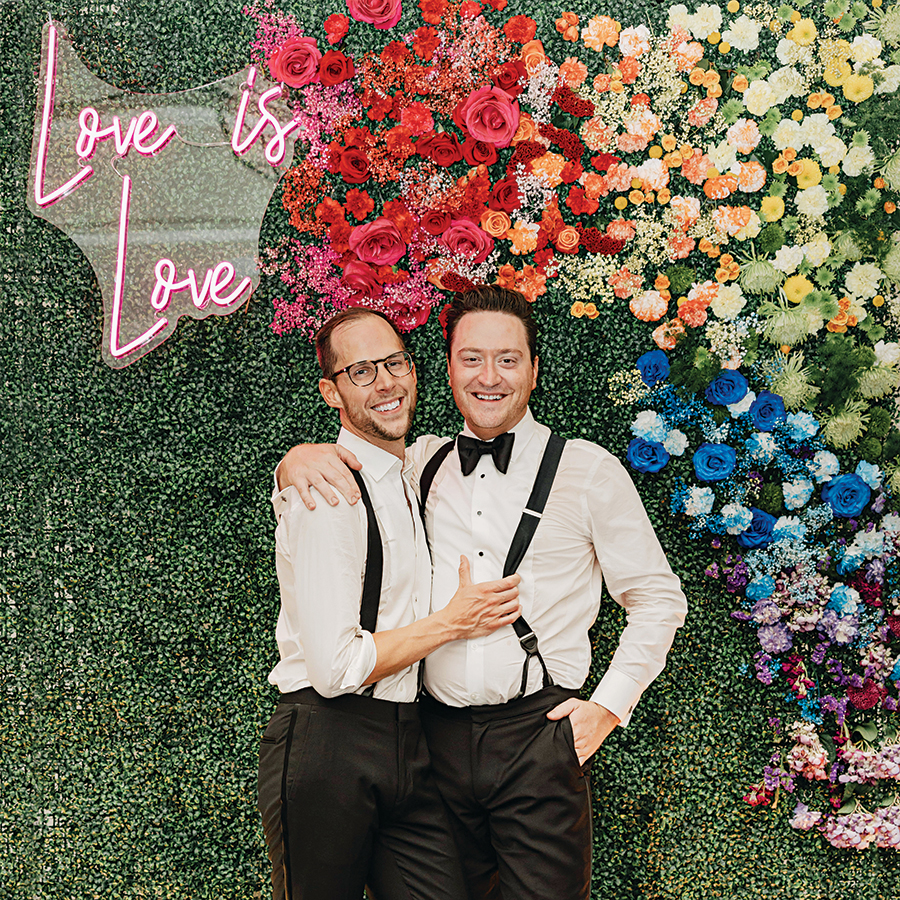 33 Munroe installed a wall of fresh flowers at the front of the reception space for guests to use as a photo backdrop. “It was the first thing you saw when you entered the space, so it was important that no matter where guests were, they felt like they were part of our wedding,” Sean says. 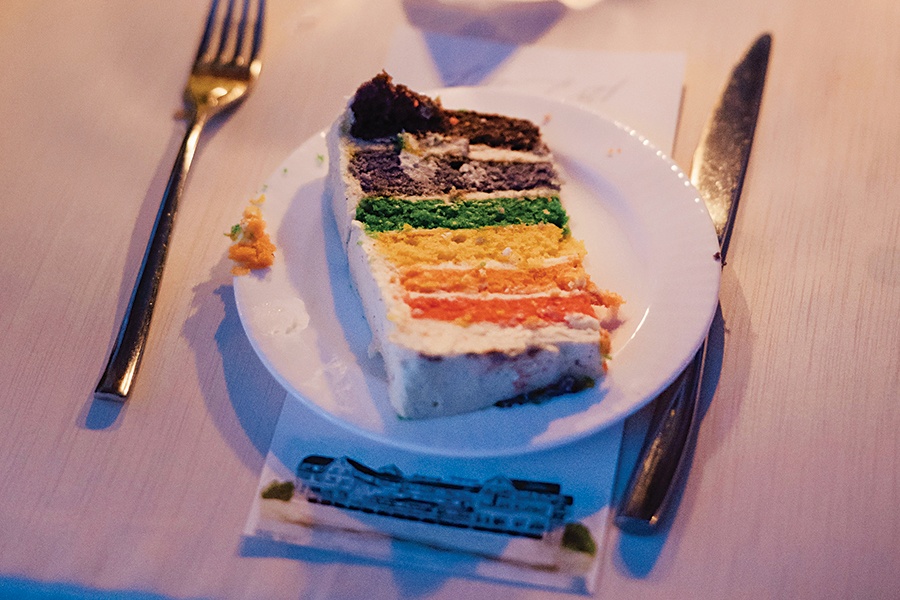 Bryan and Sean received a small rainbow layer cake as a gift from their officiant Caitlin and her boyfriend Jean-Louis, who works as executive pastry chef at Maman bakery in New York City. The couple shared it with their wedding party and served Levain Bakery cookies to their guests. 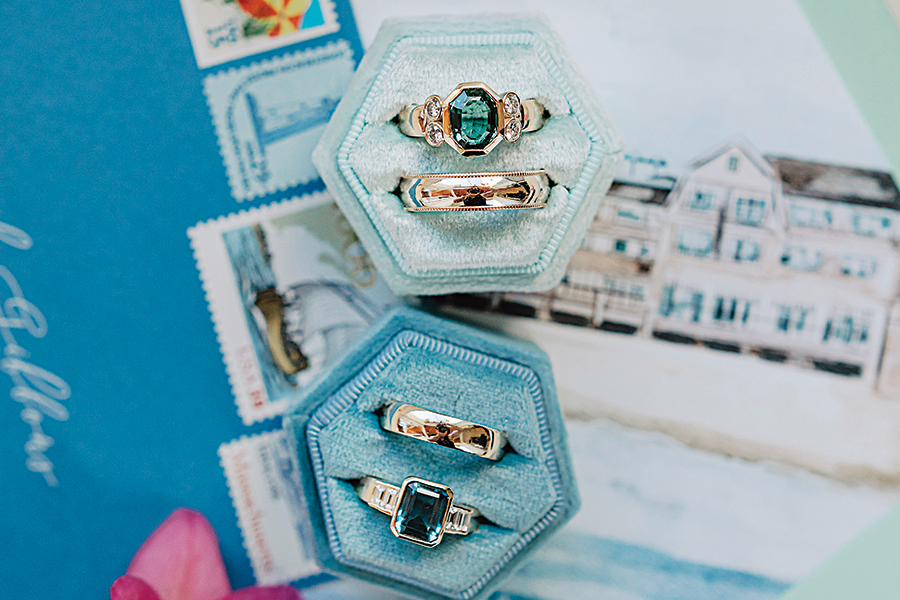 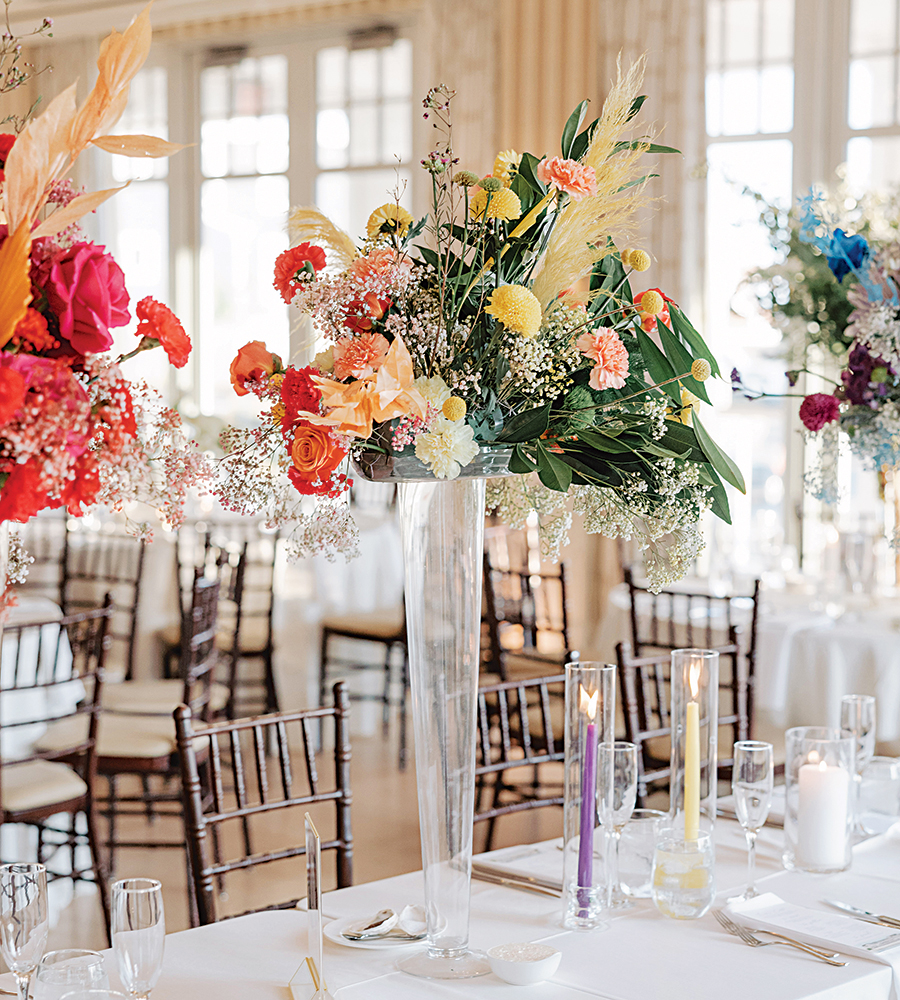 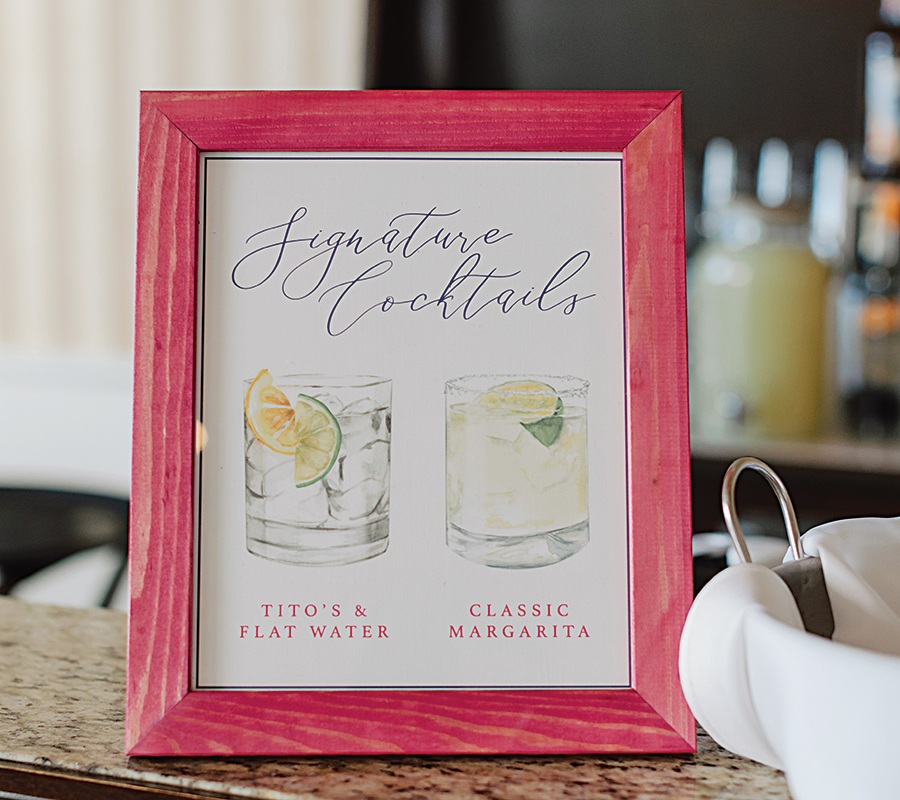 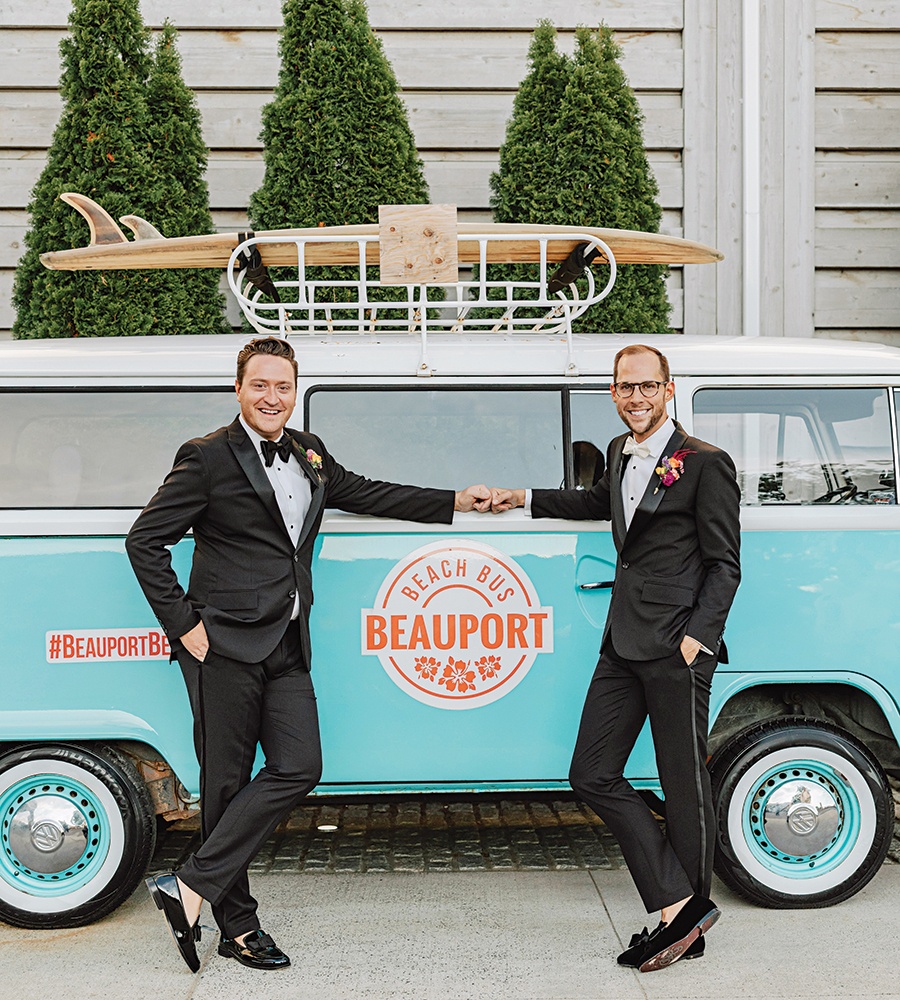 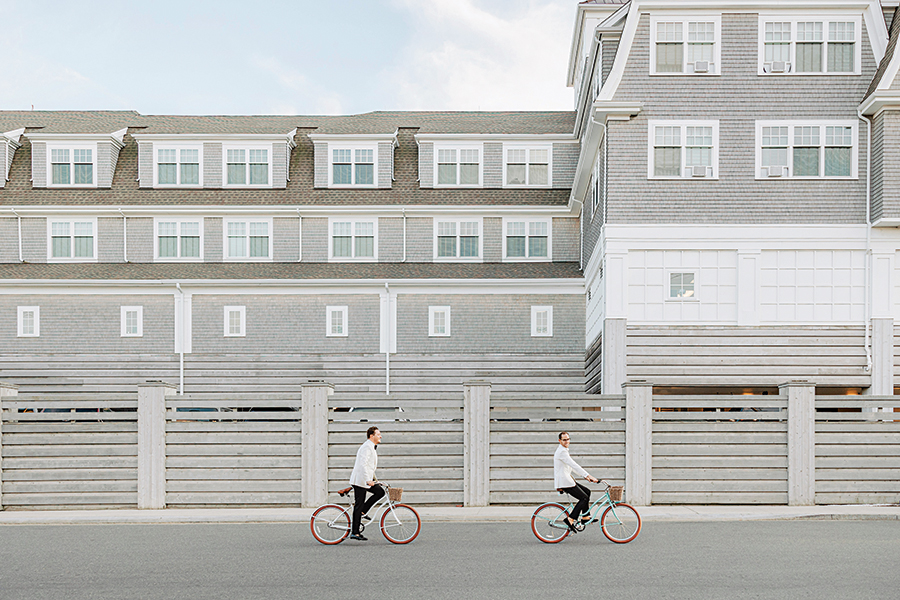