This Boston-area couple loves medicine, Christmas markets, and each other. 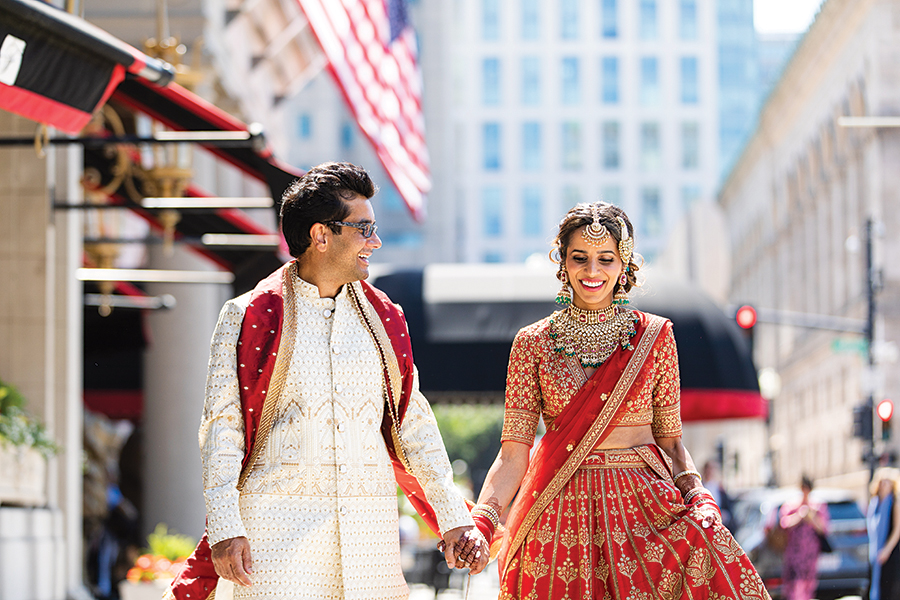 Prakriti Gaba and Rishi Wadhera are experts in matters of the heart. The couple, who met seven years ago at a medical conference in Boston, are both cardiologists. “She reached out to learn more about residency training programs in Boston,” Rishi recalls. “We ended up grabbing drinks at The Gallows in the South End, and sparks flew right away.” They maintained a long-distance relationship for several years—Prakriti pursued her lifelong dream to live in New York City, where she served on the frontlines during the height of the pandemic before she moved to Boston.

Rishi proposed on a gondola ride in the Little Venice quarter of Colmar, France, among half-timbered houses that seem plucked from the imaginations of the Brothers Grimm. “It started raining as we walked toward the dock, but as we approached the most beautiful part of the canal, the rain stopped, the sun came out, and I took advantage of the moment,” Rishi says. The newly engaged pair celebrated with vin chaud (French mulled wine) in the area’s storybook Christmas markets. The nuptials were held at the Fairmont Copley Plaza in June of 2022, capping off several days of traditional Hindu wedding festivities. The favors? Vases in the shape of anatomically correct hearts. 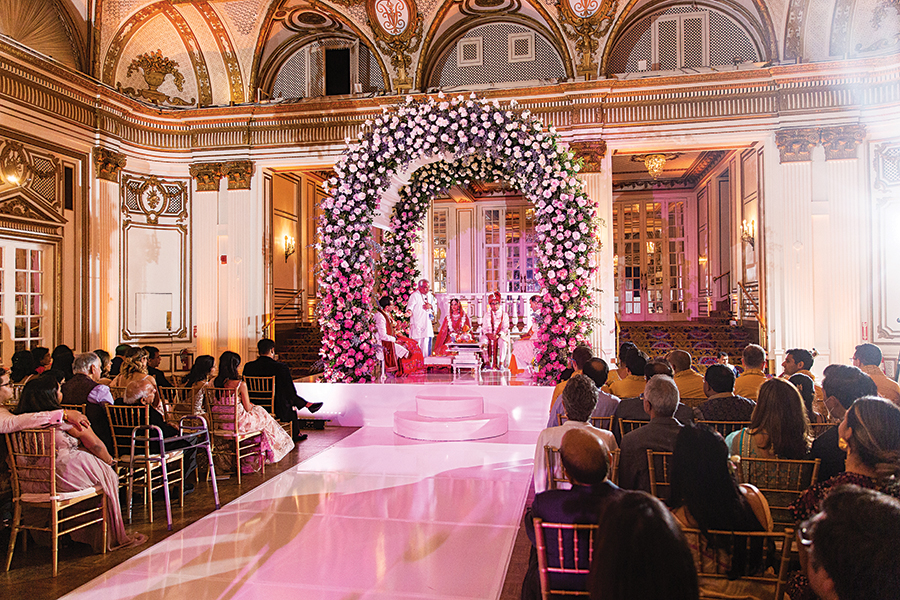 The couple wed beneath two giant arches adorned with white, cream, blush, and hot-pink roses in an ombré pattern. Guests took photos under it during the reception. “It was the biggest ceremony structure of my career,” notes wedding planner Nicole Simeral. 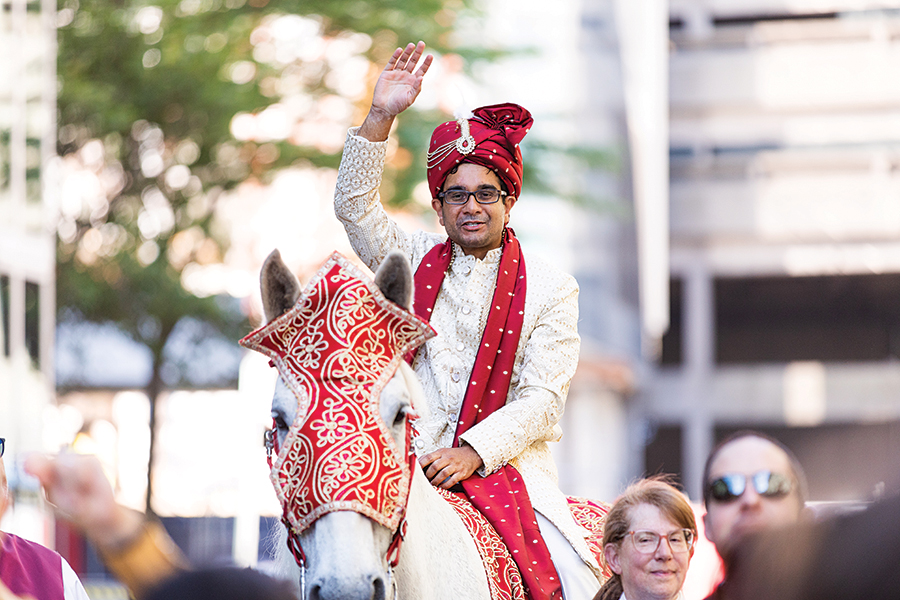 About two hours before the nuptials, Rishi arrived at the hotel on a horse for the baraat—or groom’s procession—during which his family and friends danced around him on the sidewalk. Onlookers in Copley Square delighted in the celebration. 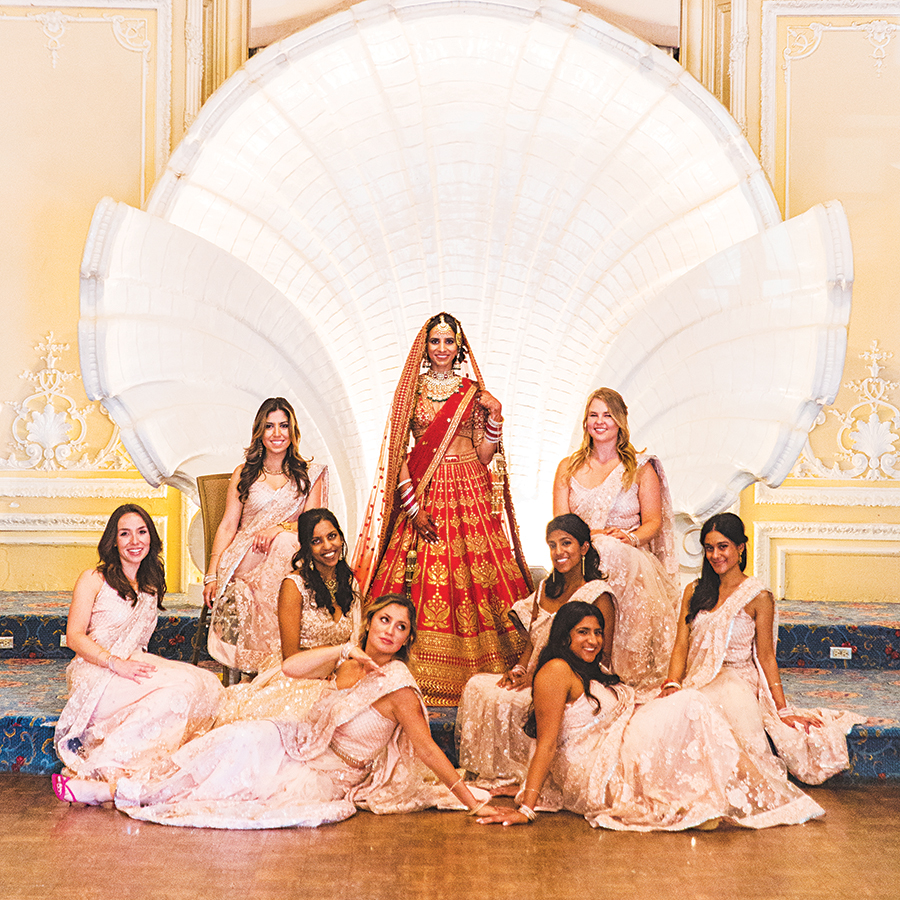 Prakriti entered the ceremony under a floral canopy held aloft by her bridesmaids. “Normally, it’s the male cousins who lead in the bride, but I wanted the girls,” she says. 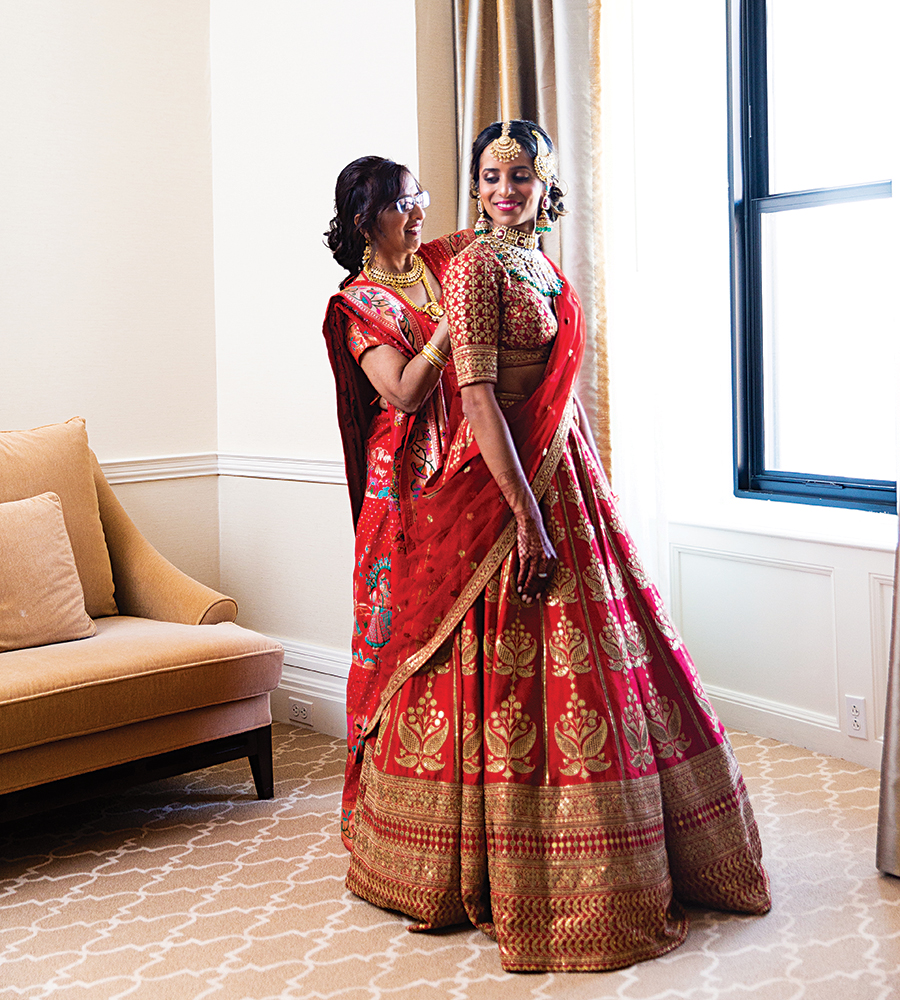 The bride wore a classic red lehenga with gold embroidery custom designed by Indian fashion house Sabyasachi. “I went to the showroom in Delhi with my mother and sister, who was my maid of honor, the winter before the wedding to choose my outfit and jewelry,” Prakriti says. 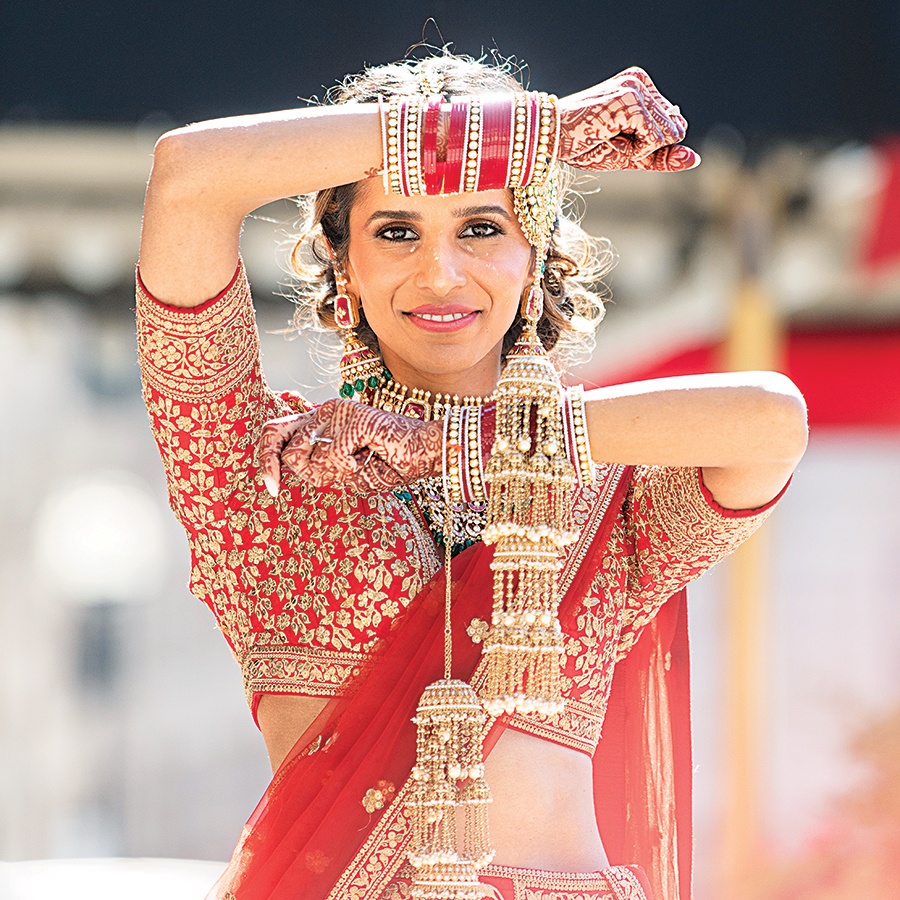 Prakriti was laden with extravagant wedding jewelry from Hazoorilal by Sandeep Narang throughout the evening. “I changed some of it for the reception because it was so heavy,” she says. 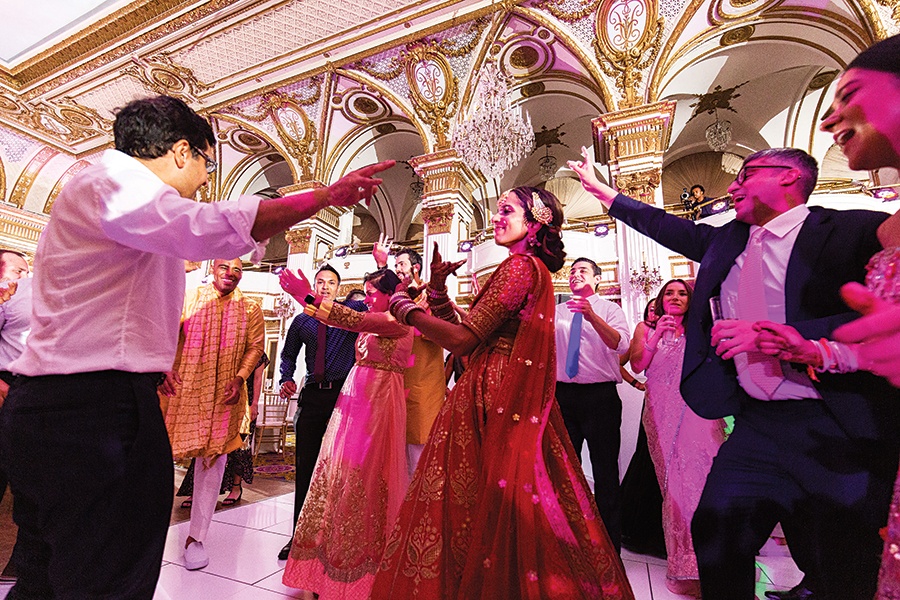 Prakriti’s dad toasted the couple with a heartwarming rendition of Barney the purple dinosaur’s “I Love You” song. “We sang it together as a family on every big occasion when I was growing up,” Prakriti laughs. “My dad is an excellent singer as well as a cardiologist!” 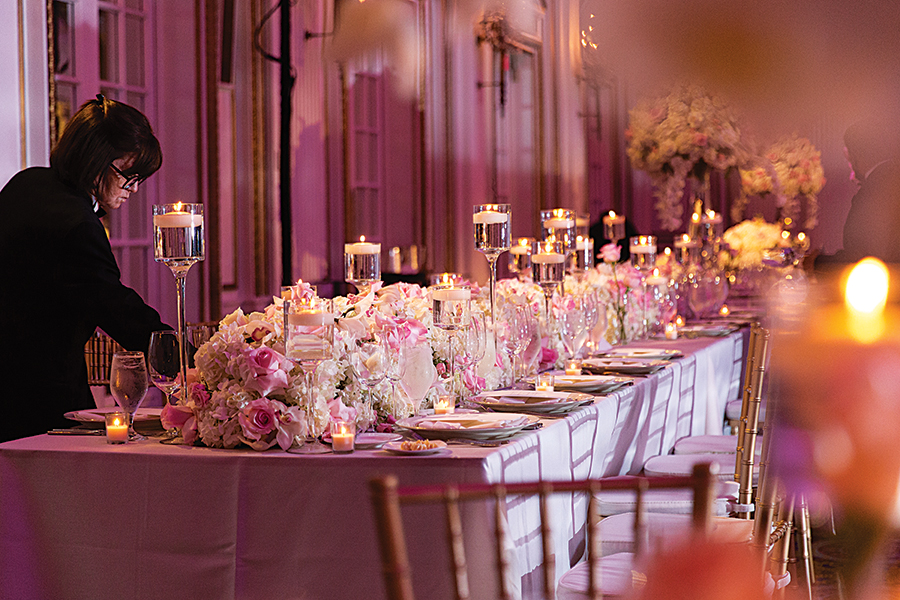 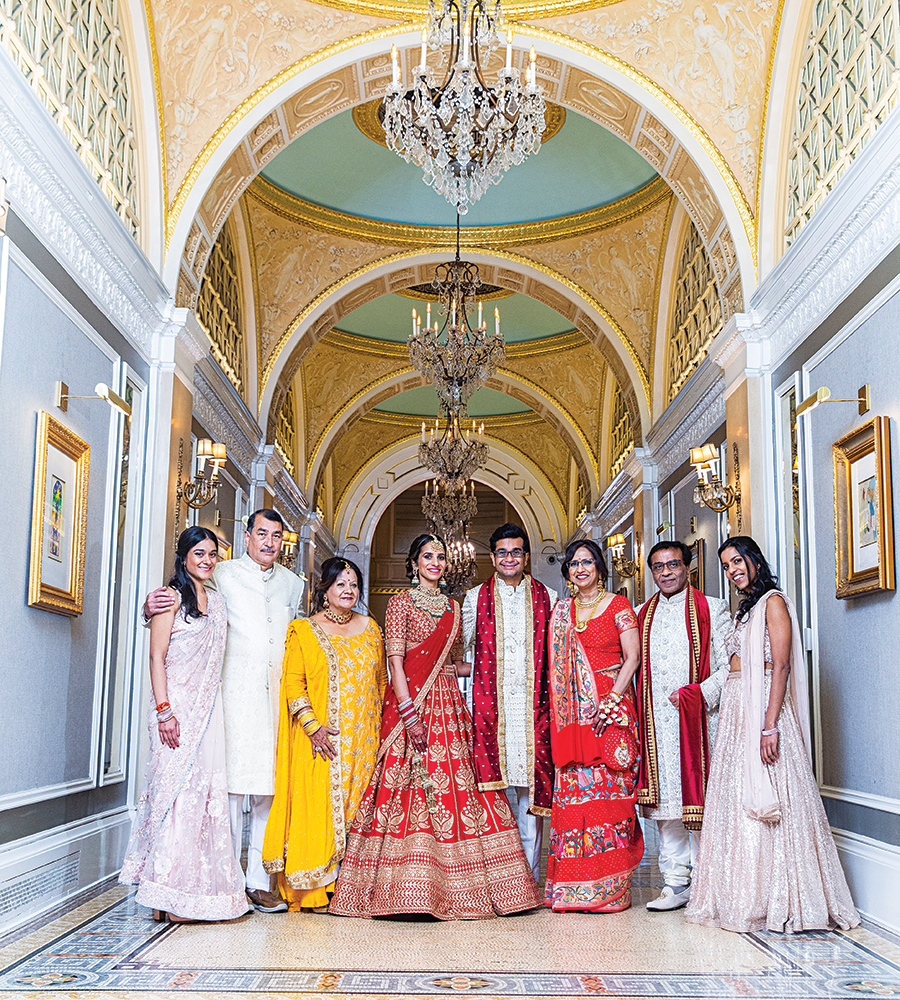 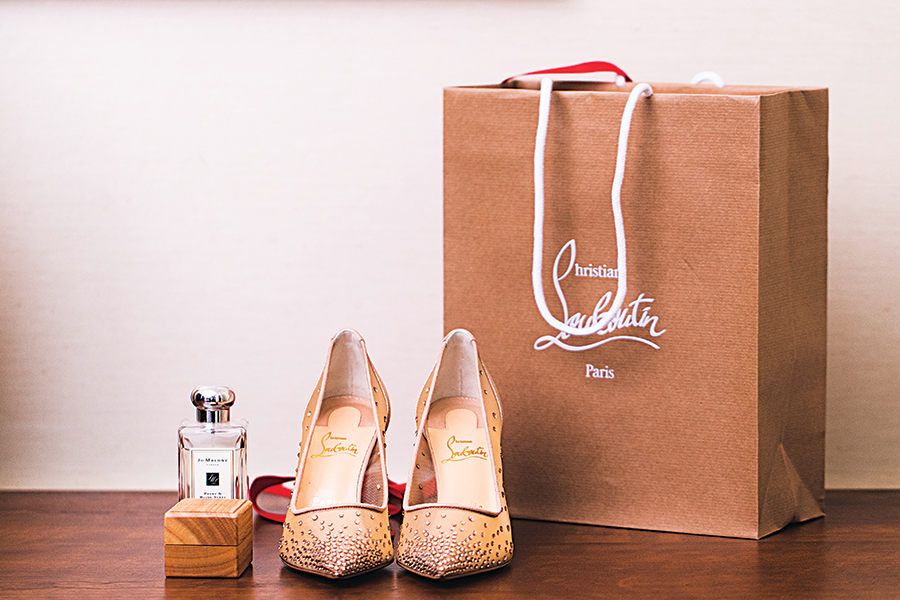