Brave the cold (and Route One) for fish by a fire pit, a heated pasta pavilion, and more destination-worthy dinners.

Chances are, after many months of social distancing, you’re looking for an excuse to get all gussied up (as in, put on some pants) and leave the house. The answer? Hop into the car and venture into the northern ‘burbs for a dining day-trip or destination date night. We’ve rounded up eight winterized patios—from Salem haunts to waterfront wonders—that are all under 45 minutes or so from Boston. Here’s to dinner with a side of elbow room. 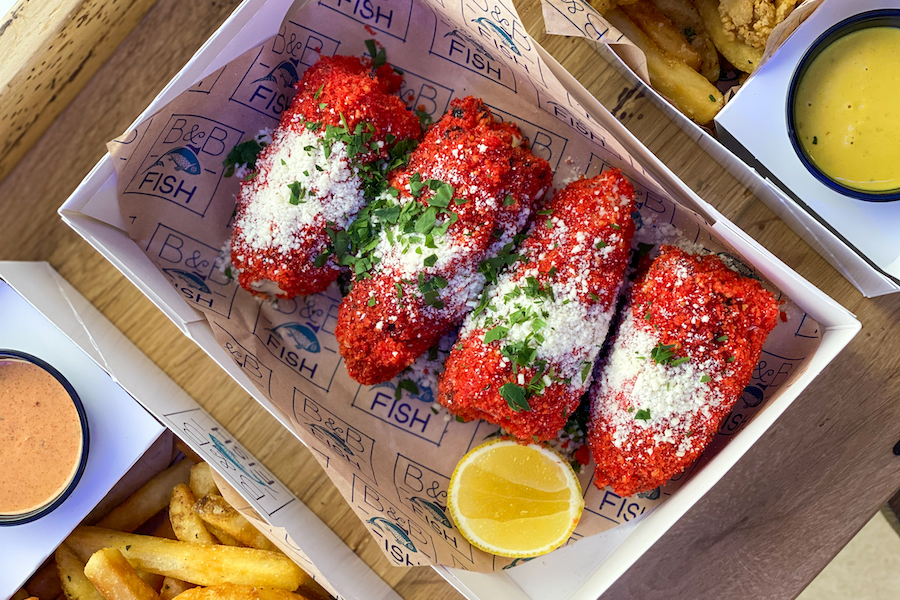 While you can always hit up Boston’s Buttermilk & Bourbon for Southern-inspired cuisine from chef-restaurateur Jason Santos and chef Jeff DeCandia (including their decadent mac ‘n’ cheese), you’ll find that a field trip to B&B Fish in Marblehead is like hopping in a time machine to the summer—and who doesn’t want that right now? Since opening in early November, the fast-casual spot has been offering beach shack-inspired plates for limited indoor dining, takeout, delivery, and outdoor dining while cozied up by the fire pit. The offerings traipse through New England by way of New Orleans: See the spicy Cajun remoulade for dipping fried whole-belly clams and Louisiana crawfish tails, the battered lobster tail with fries, and beignets with vanilla bean cream and chocolate sauce.

Let’s be Frank: At just over a year old, Frank in Beverly is one of the best suburban eateries around—no surprise, considering that it’s the newest venture from chef Frank McClelland of Boston’s late, legendary L’Espalier. Thanks to its heated patio, you can still enjoy an al fresco date night over locally sourced, creative spins on New England fare that change with the seasons, including maple sage roasted chicken with autumn vegetables, as well as halibut served with saffron arancini, melted leeks and fennel broth. When you don’t want to brave the elements, simply swing by Frank’s market and café for prepared foods and treats to go. 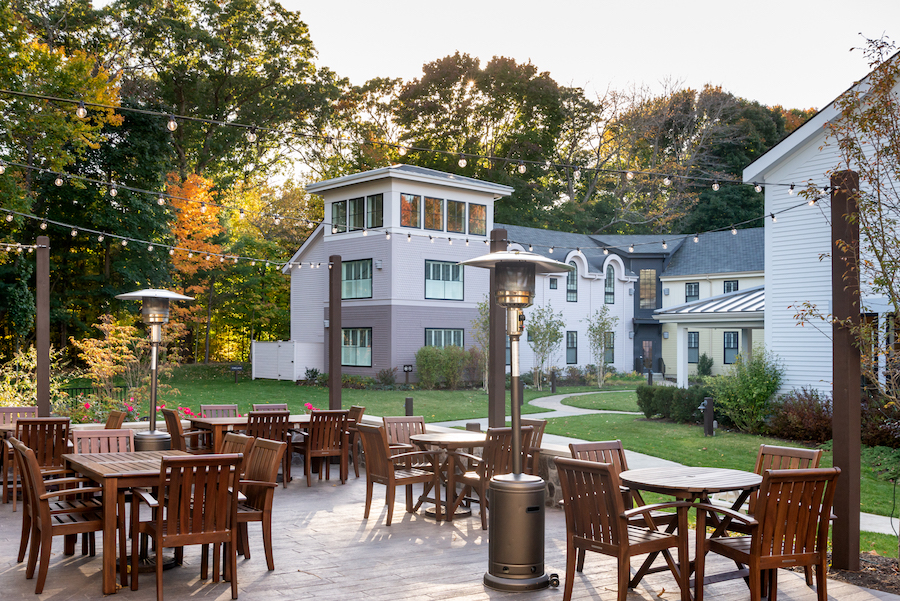 The patio at Grove. / Photo by Kim Crawford

The Briar Barn Inn is a luxe little retreat tucked in Rowley on the Essex Coastal Scenic Byway, complete with a 30-room hotel, spa, and on-site restaurant, Grove. Even if you’re not tying the knot at the site’s popular wedding venue anytime soon, you absolutely should tie one on at the Grove’s spacious patio, where free-standing heaters overlook the lush grounds. Grove serves dinners of inventive American cuisine Thursday through Sunday, as well as weekend brunch, so book a seat to savor a Bloody Mary flight—with four different variations on the classic cocktail, including a version with house pickle juice and bourbon—alongside house-made biscuits with sausage gravy.

Since you can’t be sailing through the Greek Isles right now, consider a culinary plan B: diving into modern Mediterranean cuisine at this Ipswich jewel. With tents that are open through the end of November, plus a heated patio for the rest of the colder months, it’s a fine place to relish chef-owner Petros Markopoulos’s scratch-made pita bread and wealth of meze (from dolmas to baked, filo-wrapped feta with tomato and ginger marmalade), as well as lamb gyros served with bright tzatziki. That warm breeze you feel might be from a heat lamp and not the sun-kissed Ionian Sea, but you can always close your eyes (as you savor some pan-seared salmon) and pretend.

Though Ledger’s outdoor tent is packed up for the season, the swanky New American restaurant housed inside a former bank is banking on the fact that you’ll still want to hit up one of the 22 seats on its street-level patio for bites and people watching. Thanks to the outdoor heaters and branded hoodies for sale, that’s a solid bet—especially on weekends. After all, Ledger’s chefs clearly have fun with their brunch offerings: As proof, take the “wake and bake” special, a rotating baked good (from foie gras corn dogs to jalapeno cornbread with honey butter) priced at $4.20 a pop. Saturdays and Sundays also showcase different doughnuts, like a Fruity Pebbles masterpiece of vanilla rainbow brioche that, when paired with a boozy coffee, is our kind of kids’ breakfast for grown-ups.

While we may be a ways out from surfing season, this casual Salem spot offers a slice of summer even in the winter months. A fixture on Pickering Wharf since 2013, the restaurant and bar’s outdoor heaters ensure that the 14 patio tables offer a bit of beachy escapism as you soak up water views. You won’t be bored by their obsession with boards (see what we did there?), from the shuffleboard inside, to the flatbreads served up on long boards—say, the Jefferson pizza topped with buffalo sauce, gorgonzola, chicken, and scallions. 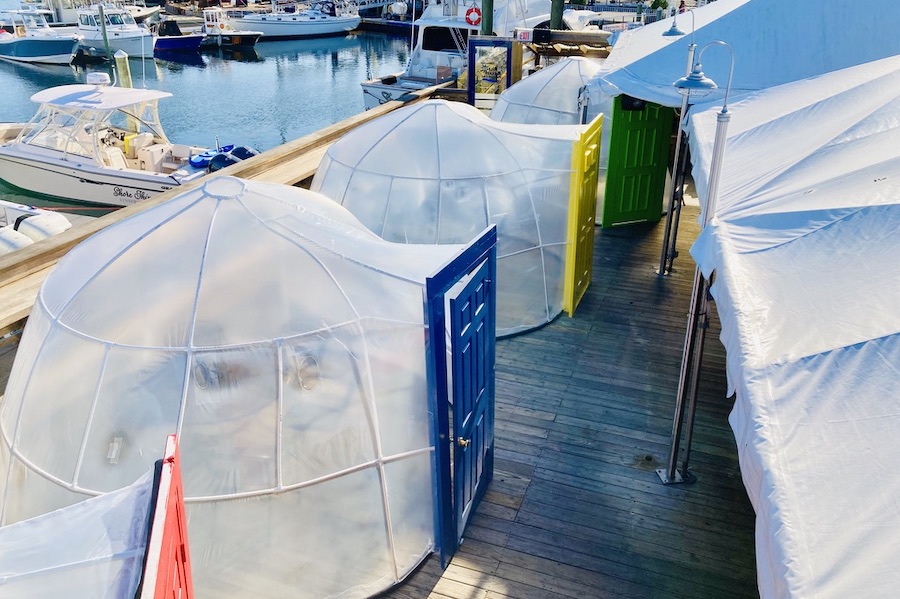 Like a little slice of the Arctic in Cape Ann, a popup village of igloos is the latest dining destination at the Mile Marker One restaurant in Gloucester. Starting on November 20, the seafood and steak eatery at the Cape Ann Marina Resort invites diners to pop through the bright doorways of custom heated igloos; each one accommodates up to six diners for full, on-call service. So go ahead and graze on plates of seasonal produce from nearby Cedar Rock Gardens, or surf and turf pairings of ribeye with trap-to-table lobster that’s fresh-caught daily—all in the toasty air of a private snow globe-like getaway. 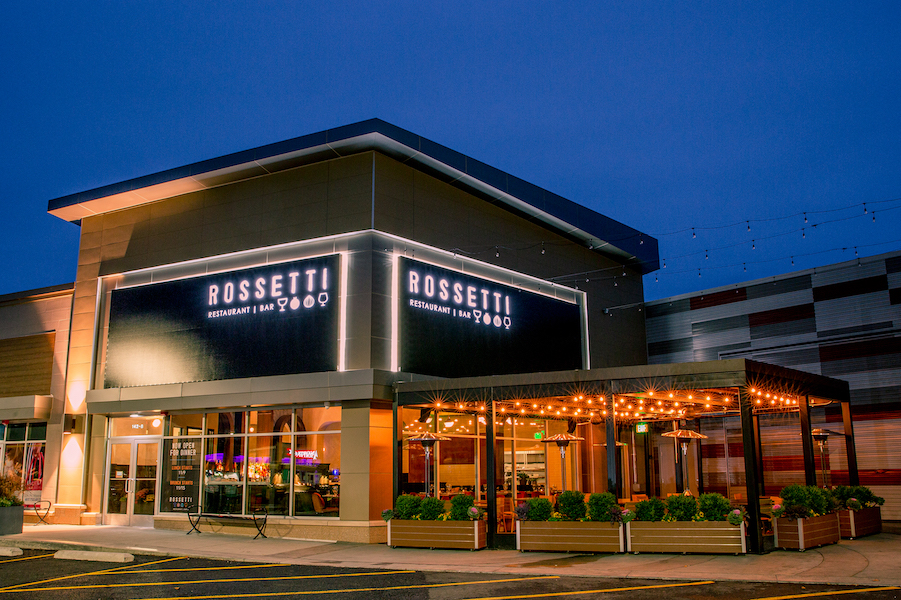 Pasta plus pavilion? Perfection. This Beverly newcomer—which opened in late October and joins sister spots in Lynn and Winthrop—showcases a large outdoor pavilion with heat lamps that cast a warm glow onto plates of pappardelle. Mistral alum chef Jason Maynard crafts a menu of Rossetti family favorites and riffs on Italian classics, such as lamb osso bucco with Parmigiano polenta. Don’t sleep through the just-launched Sunday brunch, either; you won’t want to miss the buttermilk pancakes with blackberry compote and Limoncello vanilla syrup that are fluffier than even your nonna could whip up.