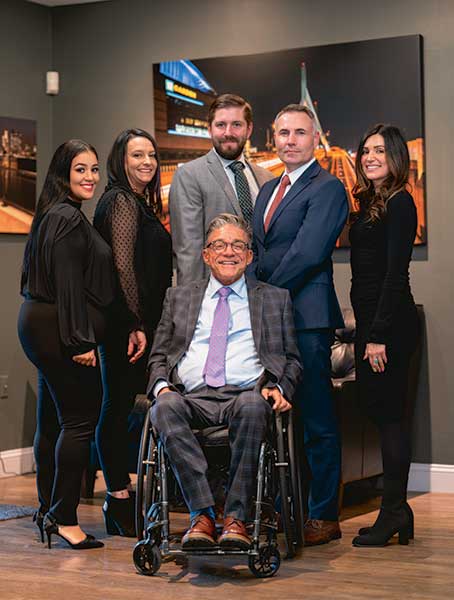 At the age of 22, Attorney Michael Mahoney broke his neck in a diving accident. He didn’t know how his medical bills would get paid, or if he would ever work again. Because of dedicated professionals at Boston hospitals, he regained his independence. He learned to drive, had kids, and graduated from law school. Because of his unique history, Mahoney, Mike to friends and clients, offers his clients a unique understanding of their situation. His goal is and always has been to maximize financial recoveries for the injured.
In 26 years of practice, Mahoney has amassed an extraordinary record of success, recovering tens of millions of dollars for his clients. Recent successes include a $10 million dollar settlement in a motor vehicle accident and a $2.8 million dollar settlement for a slip and fall. The Law Offices of Michael Mahoney have been named to Massachusetts Lawyer’s Weekly’s Top Verdicts and Settlements list five times. He and his associates have tried cases throughout the Commonwealth at the State and Federal level and have argued at both the Appellate and Supreme Judicial Court levels. In addition, Mahoney teaches litigation skills at Boston College Law School, has been featured on NBC10 Boston, Fox News, the Washington Post, and the Boston Globe, among other outlets. Working alongside Mahoney is Ryan Gilday, a senior associate with 20 years of personal injury experience. Gilday has successfully tried cases in courts at all levels throughout the Commonwealth and has experience at both the Massachusetts Appeals Court and Supreme Judicial Court.
Attorney Garrett Balabon joined the firm in July of 2022. Prior to his time at the Law Offices of Michael Mahoney, Balabon specialized in Social Security disability cases in courts throughout the country.