Worried we’d slept through the latest in alarm-clock technology, we put five new ringers to the test.

My alarm clock was the traditional beeping kind—a plastic eyesore so hideous that I hid it behind a picture frame. It was stationed across my room, forcing me upright to turn it off. I’d stumble over, press snooze, and crawl right back into bed-—four times every morning. So when my editor asked me to test the newest alarm clocks, I welcomed the chance to find something—anything—better. For five mornings, I invited as many different models into my bedroom for a trial run.

Day 1
It’s 6:04 a.m. Enter Clocky, a diminutive plastic hell on wheels, chirping like R2-D2 gone wild beside my head. I roll over and deploy the snooze button. Sweet silence. Nine minutes later, Clocky takes a swan-dive off the nightstand. Landing upright, it drives madly across the floor, head-butts the dresser, spins and makes for the closet, then pivots like a squirrel on a road doing a fake-out, halts at my desk, and makes a huge stink until I turn it off. I’m most definitely awake.

It’s almost a hands-down winner, but like every alarmist, Clocky has issues. The display is quite small (not even 2 inches wide and just over half an inch high), and the numbers don’t glow in the dark—you have to press a button to activate the three-second backlight. Obstacles such as strewn-about clothes and thick carpeting will immobilize Clocky, greatly reducing its efficacy. Another downside? Clocky can withstand falls of only a few feet; depending on the height of your nightstand, its first morning may also be its last.

But Clocky’s easy setup, funky appearance, Boston roots (the prototype was designed by an MIT student), and cool functions makes this an alarm clock worth chasing after. $49.99, nandahome.com.
***&frac12; 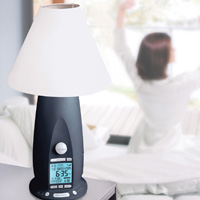 Claiming to work with the body’s “natural waking process,” the Rise & Shine simulates dawn by gradually brightening. The faux sunrise can also be paired with the usual noisemakers (radio, nature sounds, beeping), in case a bright light isn’t enough to pry open your lids. (It wasn’t for me.)

After a lengthy setup process, the included light bulb (only Verilux bulbs can be used with this model—replacements cost $20) didn’t work. Hours later (ironically, right before I tucked in for the night) the light suddenly burst to life—only to refuse to go on the following day. And I never managed to get the colored light display to work. 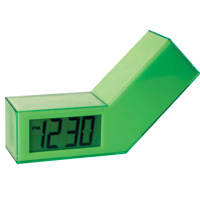 After psycho clock and simulated sunrise, I tried Lexon’s OnOff model. Designer Nina Tolstrup took the traditional alarm clock and bent it—literally. To activate this V-shaped alarm, you have to turn it on its side; returning it to its upright position turns it off. Finally, no more searching for off buttons in the dark. The only thing this model is missing? A snooze feature. (Gulp.) While the alarm’s faint beeping did wake me up, the easy shutoff let me sneak in an extra 15 minutes of sleep—making for yet another morning dash.

The OnOff, sans faux sunrise, wheels, radio, or charging station, is charmingly retro. And its sleek physique is one I’d display with pride … as a decoy for my old clock, hiding behind the picture frame. $33, ICA Store at the Institute of Contemporary Art Boston, 100 Northern Ave., Boston, 617-478-3104, lexon-design.com.
**&frac12;

Day 4
It’s 6:17 a.m. and i’m lying in bed, singing along to James Brown’s “I Got You.” After a few minutes, I lean over and press the small off button on the side of iHome’s iH4, a black pyramid-shaped alarm clock that doubles as an iPod dock. The iH4 lets you wake up to any song from your iPod’s music library, hence the upbeat oldie-but-goodie that got me grooving this morning. (Choose your songs wisely—Barry White’s bass made me hit the snooze.)

Setup was fairly easy, thanks to a well-written manual. While I was disappointed that the iH4 needs an adapter to work with the iPod Shuffle (it works with all other models), its other features rock: a decent-size LCD display; a dimmer, so you can control the display brightness; a daylight-savings-time switch; a “gentle waking” option, which gradually ups the volume; a nine-minute snooze cycle; a sleep timer, so you can fall asleep to your music, automatically shutting it off after a specified time; and a backup battery in case of power outage. These useful features, paired with the iH4’s modern design, make this alarm clock a number-one hit. $49.99, Brookstone, Copley Place, 100 Huntington Ave., Boston, 617-267-4308, brookstone.com.
**** 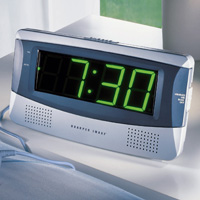 At 6:14 a.m., my pillow is vibrating uncontrollably, and a loud buzzing is coming from my nightstand. Only the dead could sleep through this. According to its literature, the Sonic Boom! Loud + Vibrating Alarm Clock is “designed to wake up the deepest sleepers.” When they say “deepest,” I suspect they mean “interred.”

The alarm has two parts: a circular disk that goes under your pillow to convulse you out of your dreams, and a base with an alarm—the volume and tone of which can be adjusted from “slightly hard of hearing” to “narcoleptic.” At half an inch thick, this alarm is the sleekest I’ve seen. A large, easy-to-see display (2-inch-high digits!) and programming-for-idiots instructions make this the ultimate in user friendliness. It’s also got a nine-minute snooze function, but once you’ve been roused by the Sonic Boom, it’s doubtful you’ll avail yourself of that feature. $39.95, the Sharper Image, Prudential Center, 800 Boylston St., Boston, 617-262-7010, sharperimage.com.
*****