Out of the Woodwork

In coaxing a neglected property back to life, Wenham designer Sebastian Carpenter brings its rural grace to the fore.

No one wanted this house. “The Realtor said that when prospective buyers saw it, they wouldn’t get out of their cars—they just left.

The formal landscaping harkened back to the original 1916 structure, a grand three-story red brick Georgian Revival that burned to the ground in 1950. Unfortunately, its replacement was “a double-high, double-wide,” recalls Carpenter, that turned away buyers in droves.

But he and his wife, Elisabeth, one of the founders of the TV Internet company Brightcove, knew they could do something special when they bought it in 2003. For the next two years, they completely reinvented the house and now live there with their children. “We wanted a home where we’d feel tied to the land, grow vegetables, fruit trees, have sheep grazing, chickens, lots of space where our three children could play, and where we could have guests come and stay,” he says. Today, the long, pine-shaded drive leads from the street up to an expansive modernist pale yellow house, whose horizontal banding in the stucco walls are a gentle nod to Adolf Loos, art deco, and Frank Lloyd Wright. 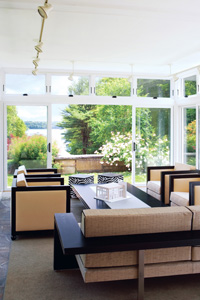 After a semester at the Yale School of Architecture, Carpenter designed and built furniture, then moved to London with his wife to study interior design at Chelsea College of Art and Design. There, he developed a busy interior design practice while helping raise their three children.

“We spent weekends at big English houses in the country,” Carpenter says, “visiting friends or touring various National Trust properties. I was intrigued with iconic British style, but at the same time my personal style became more contemporary. I did projects in traditional English homes but started to treat spaces like works of art instead of just spaces to fill. Architecture school built the framework, but London made me who I am.” 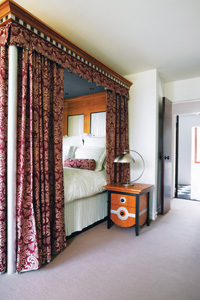 Carpenter embraced the long, narrow footprint of his ’50s house by creating two distinct faces: The east elevation, overlooking the lake, features oversize windows, more glass than solid, while the west has smaller, strategic punctures. Centered on this façade is a new glazed portico. Beyond, the house opens to a 25-by-13-foot entry hall with a white and green checkered marble floor. 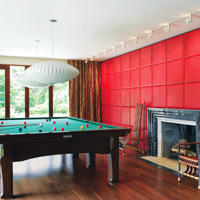 “I like to paint with a broad brush and use few colors and gestures, repeated many times,” he says. The same polished green stone of the entryway, for example, tops the Carpenter-designed dining table and the kitchen counter. Green marble also forms the hearth of the elevated double-sided fireplace that faces both the living room and the kitchen. Upstairs, the floor and countertop of the master bath are furnished with the same green marble. 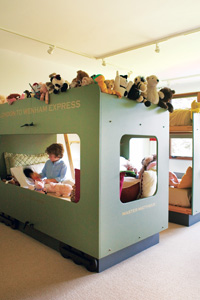 The Carpenters planted an apple orchard and are still considering acquiring chickens. The nearly 100-year-old gardens have been coaxed into bloom and embellished by new plantings. The couple takes special pride in the row of raised beds in the walled garden just outside the kitchen door—the source of a variety of homegrown vegetables. “Last year we had tomatoes clear into December,” says Carpenter happily.