Going for the Gold

Designed by Office dA and completed in 2007, the Macallen is Boston’s first residential building expected to win a gold LEED rating (the Oscars of green construction). The South Boston high-rise has already proven that luxury living can be sustainable—just ask the people who live there. 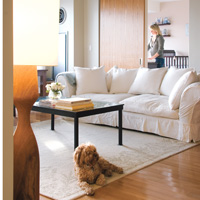 UNIT # 510 Carrie and Chris Hicks met in Manhattan. Both southerners (Carrie, 35, is Florida-born and Chris, 29, is from Louisiana), they loved New York but wanted more room, a garage, and proximity to golf courses. So Chris found a Boston-based investment banking job in 2004. With 24 hours to find a home, they grabbed a rental at the Macallen’s sister, the Court Square Press Building. A few months later, Pappas Enterprises unveiled its plans for the Macallen, and the Hickses were sold. Carrie loved the green elements. “We thought it was a great way to raise a family, and great for Cooper,” now 5 months old. “In the summer, everyone gathers outside on the roof deck by the pool,” says Carrie. “In New York, you don’t feel that close to your neighbors.” 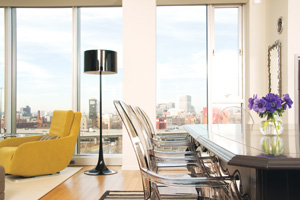 UNIT #501 “I couldn’t wait to get out of the ‘burbs,” says June Mattioli, 51, who raised her family in a large Sudbury home before moving to Boston in May 2007. She and her husband, Bob, 59, “love the energy and excitement of the city.” Mattioli had commuted to her fundraising job at the ICA for over a decade and was happy to downsize. “We got rid of all of our furniture—gave it to friends and charities. My husband travels a lot, and now he’s five minutes from the airport.” She adds, “We didn’t want any stairs, we wanted a view and a garage, and we wanted to be in an emerging neighborhood where there was an opportunity for appreciation in value.” The Macallen’s green aspects were an unexpected bonus. “It’s better for us, and it’s better for the planet,” she says. 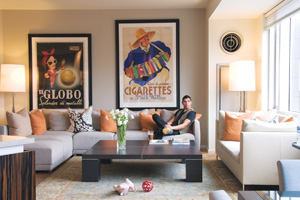 UNIT # 417 Ephrain Medina, 29, and Roy Schwartz, 52, both from New York, were living in the South End but felt hemmed-in. Schwartz, owner of Boston’s Best Realty in Allston, assumed they would move there or to Brighton for more space—until he heard about the Macallen. “We came by the site and fell in love with the layout of this corner unit,” says Medina. Buying preconstruction meant they could make adjustments to the plan, says Medina, a freelance graphic designer who did the condo’s interiors in an up-to-date, contemporary style. What do they love best? “It’s quiet but still surrounded by the lights of the city.” Medina also loves the green features. “I feel like I’m living in the future.”