Ready When You Are

I’m driving along the back roads of Acton, trying to reassure myself I’ve read the directions right. I mean, this is Acton, land of exclusive homes with winding driveways—and I’m looking for a factory. Then, there it is, set back from Main Street, a large steel building where workers crank out hundreds of houses each year. Ready-to-assemble components, made here at prefab pioneer Empyrean, travel across the country and around the world on tightly packed pallets; once they’re on site, a builder can stitch them into a weather-tight shell in as few as 21 days.

During World War II, when Empyrean put down its roots, any architect worth his drafting pen had a prefab design sitting in a drawer. After all, automation was considered the modern fix for the world’s ills: Whoever realized the perfect pre-made components first would strike it rich. Or that was the logic, anyway. Thanks to those prescient thinkers, prefab later blossomed, peaking in 1973, when nearly 600,000 ready-made homes flooded the American market. Since then, though, the industry has been steadily declining, and demand for prefab houses in the United States has dropped 62 percent in the past seven years alone. So while we’re happy to buy almost anything mass-produced—from cars to corn to wedding gowns—we American moderns, unlike the Japanese, don’t take kindly to factory-made houses.

The problem is, we’ve all been programmed to believe that only a custom-built home can properly express who we are. A fine idea, except that how a place is built doesn’t determine its distinctiveness. If you don’t believe me, drive through suburbia, where house after custom-built house is similarly structured and designed and full of mass-made appliances, tile, and flooring. In other words, almost all “custom homes” are just a decorated frame rather than an original thought.

So what? you ask. Well, I’m convinced that buildings made in parts and assembled on-site are significantly better constructed than the house your builder would piece together in the wind, rain, and cold. This is not a criticism of our region’s fine contractors. Rather, because manufactured homes are made under factory conditions (plenty of space, heavy precision equipment, a roof), they’re squarer and tighter, and their production generates significantly less waste. Stepping out of my car in Empyrean’s parking lot, I spot just one lonely dumpster for the entire factory.

And here’s the big news: Thanks to the integration of computer-aided design, nearly every component of a prefab home can be modified or customized to suit a designer’s or client’s needs. Just ask Maryann Thompson, founding principal of Cambridge’s award-winning Maryann Thompson Architects, who was invited by Empyrean to conceive a house that could be bought “off the shelf” but wouldn’t look cookie-cutter. The result, called the Hinge House, is a cool modern residence with a slanted roof, designed as two separate buildings that can be oriented on-site to take advantage of available sun, wind, and views. The cost? About $250 per square foot, or roughly two-thirds the price of a site-built home. Delivery to the customer takes just a few weeks. 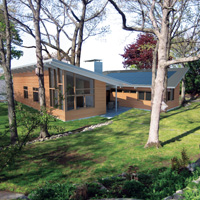 Prefab is an international idea that a long list of young architects and forward-thinking businesses (Ikea, for one) has been trying to tell us about for a while. Fortunately, now the tastemakers—those who can afford to choose—are executing an end-run: This spring, the Museum of Modern Art in New York erected five prefab homes by global designers on its vacant west lot. All this is giving credence to that post–World War II maxim—if Americans could only catch the factory-house wave, it would take some of the heat off our limited resources. For me, I say just getting Americans to think as much about how their homes are made as how they look is a giant step in the right direction.