The Hub can hold on to its history, but that’s about it. Here we examine—and plot on a city map—the various seepages plaguing Boston, from water to natural gas to college graduates. 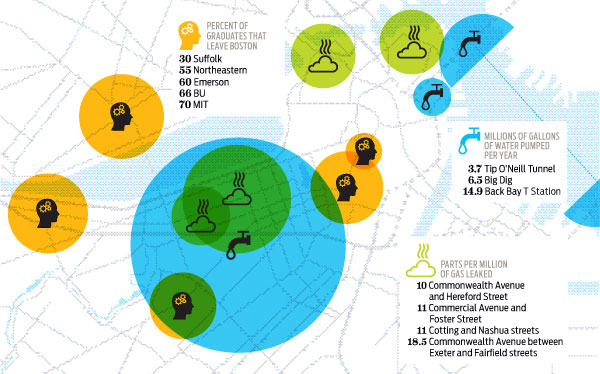 Water World
So we all know the city pushes millions of gallons of water out of the Big Dig each year. But the pumps work harder elsewhere in town. The sole thing keeping the Back Bay from sinking is, curiously, ground water. Many buildings there sit on wood pylons, which are strong while submerged. To wit, the Boston Groundwater Trust oversees 135 recharge wells that route storm water underground. And at Back Bay station, the MBTA has also turned on the tap. Last year it pumped in 14.9 million gallons of drinking water — then pumped it out to keep the tracks from flooding.

Passed Gas
There are literally thousands of natural gas leaks around the city (259 are downtown), and they spew out more than 1 billion cubic feet of gas each year through cracked and corroding pipes. Most leaks are too low to blow, but they far exceed the normal atmospheric level of 1.86 parts per million. Lost gas accounts for 6 to 8 percent of the state’s greenhouse-gas output, and in 2008 cost National Grid ratepayers $11 million. (Note: Figures are estimates based on preliminary data from BU professor Nathan Phillips. Only the four largest leaks are pictured on the map.)

Brain Drain
Every May, tens of thousands of students from Boston-area universities walk for their diplomas, and most of them keep right on going. On average, the state retains between 30 and 50 percent of grads from local colleges and universities (including both bachelor’s and advanced degrees). But thankfully, 70 percent of Suffolk University students stick around, and statewide, 10-year trends indicate that the mass exodus of 18- to 24-year-olds from the Bay State has slowed. That age group made up 10.4 percent of the population based on the 2010 census, versus 9.1 percent in 2000.