Will Work for Perks

Boston's tech startups go nuclear in the war for talent. 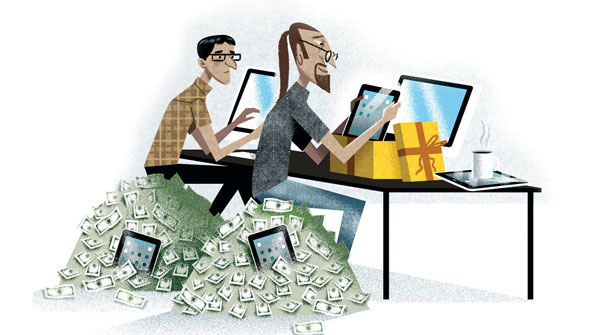 Dharmesh Shah was concerned. Earlier this year, the cofounder of HubSpot, a Cambridge-based Internet marketing firm, was desperate for minds to help lead the company’s migration to the Web platform HTML5. Shah has long offered $2,500 to employees who refer new hires, but that strategy wasn’t working. So he upped the ante: $10,000 for a successful recommendation from anyone, on staff or not.

HubSpot’s offer was driven by necessity. With smartphone, tablet, and software sales booming, developers have become a hot — and rare — commodity. The dot-com bust spooked many would-be software engineers: Students declaring a computer science major plummeted 50 percent from 2002 to 2007 nationwide, according to the Computing Research Association. And those smaller classes are now graduating just as the demand for their skills is ballooning.

Instead of wasting money on recruitment perks like foosball tables, though, companies are going with cash.“My experience,” says Bob Quinn, a recruiter at the Cambridge-based software shop Akamai, “is that Ping-Pong tables get dusty and dogs make a lot of noise.”

For senior-level recruits, HubSpot offers a “jailbreak” bonus of $1,000 for each year of employment at a big corporation. Newly degreed computer scientists, meanwhile, are choosing among six-figure offers. When recent Bowdoin College grad Ben Johnson dropped in on a mobile meet-up in Boston, for example, startups eyed him lustily. “I thought I would have to be chasing down these companies,” he remembers. “I got there, and everyone’s like, ‘We have a job and we want you to work for us.’”

Within months of Shah offering his $10,000 bounty, two other local tech companies rolled out packages of their own: Shopximity, a mobile retail concept, matched HubSpot’s $10,000, while Performable, a marketing automation firm, raised the bar to $12,000. Shah claims he’s been successful with his hiring bonus, but he gets cagey about specifics: “We are, after all, in the midst of a battle for talent.”

So which area tech company offers the greatest rewards for referring someone who gets hired? The best package we could find was at Akamai in Cambridge, which sweetens the pot with each new worker an employee sends its way.

Third referral: A trip for two to the company’s annual “titan” performers’ retreat. (This year’s destination was Puerto Rico.)