I Tried It: Curling at the Liberty Hotel

It's a bite-size taste of the real thing, with spiked hot cider and a "curling concierge." 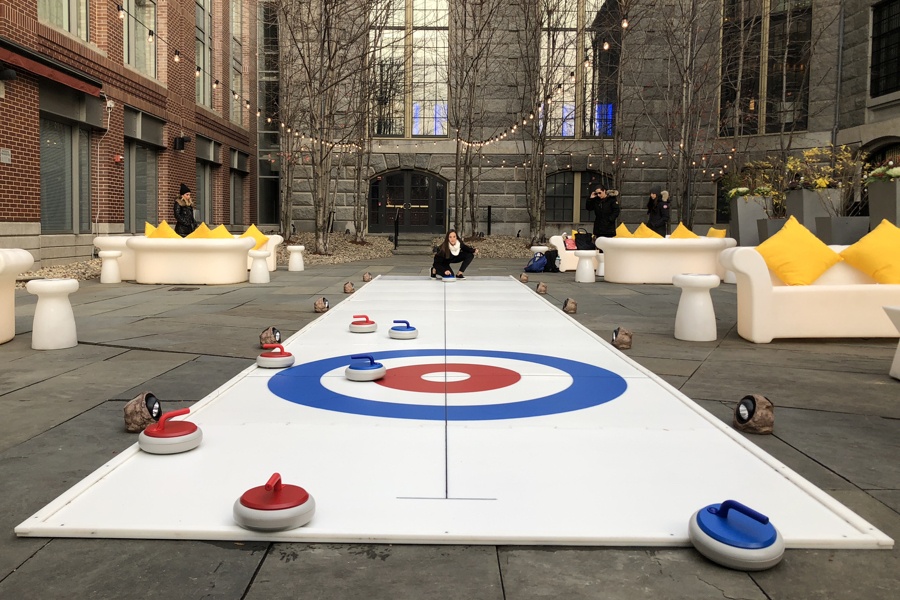 Honestly, it was just a matter of time before Boston got its first curling bar.

People are naturally drawn to the sport, which consistently ranks among the most popular events at the Winter Olympics, and for good reason. At least compared to some of the other feats of athleticism at the Games, it seems like something you and I could actually do if we put our minds to it. It’s also the icy equivalent of the world’s best bar game—tabletop shuffleboard—only bigger, colder, and with more aggressive brooming. What’s not to love?

Except there hasn’t been all that much enthusiasm for curling in Boston, and we’re not unique in that respect. According to the trend-tabulating sports nerds at FiveThirtyEight, interest in curling spikes every four years, then all but vanishes after the closing ceremonies. I myself thought about getting into it after watching the action in PyeongChang, but have never managed to check out the North End Curling Club, the group founded last year and based out of the Steriti Memorial Rink, which is the city’s one and only club dedicated to the sport.

So when I first caught wind of the Liberty Hotel’s plans to offer curling and cocktails at its upscale bar and restaurant, Clink, this winter, I had to see what this was all about. Maybe there’s a curler in me after all. Maybe there’s one in you.

The staff at the luxe West End hotel gave Wellness Editor Tessa Yannone and me a walk-through of its new offering, which is open all season starting this week. 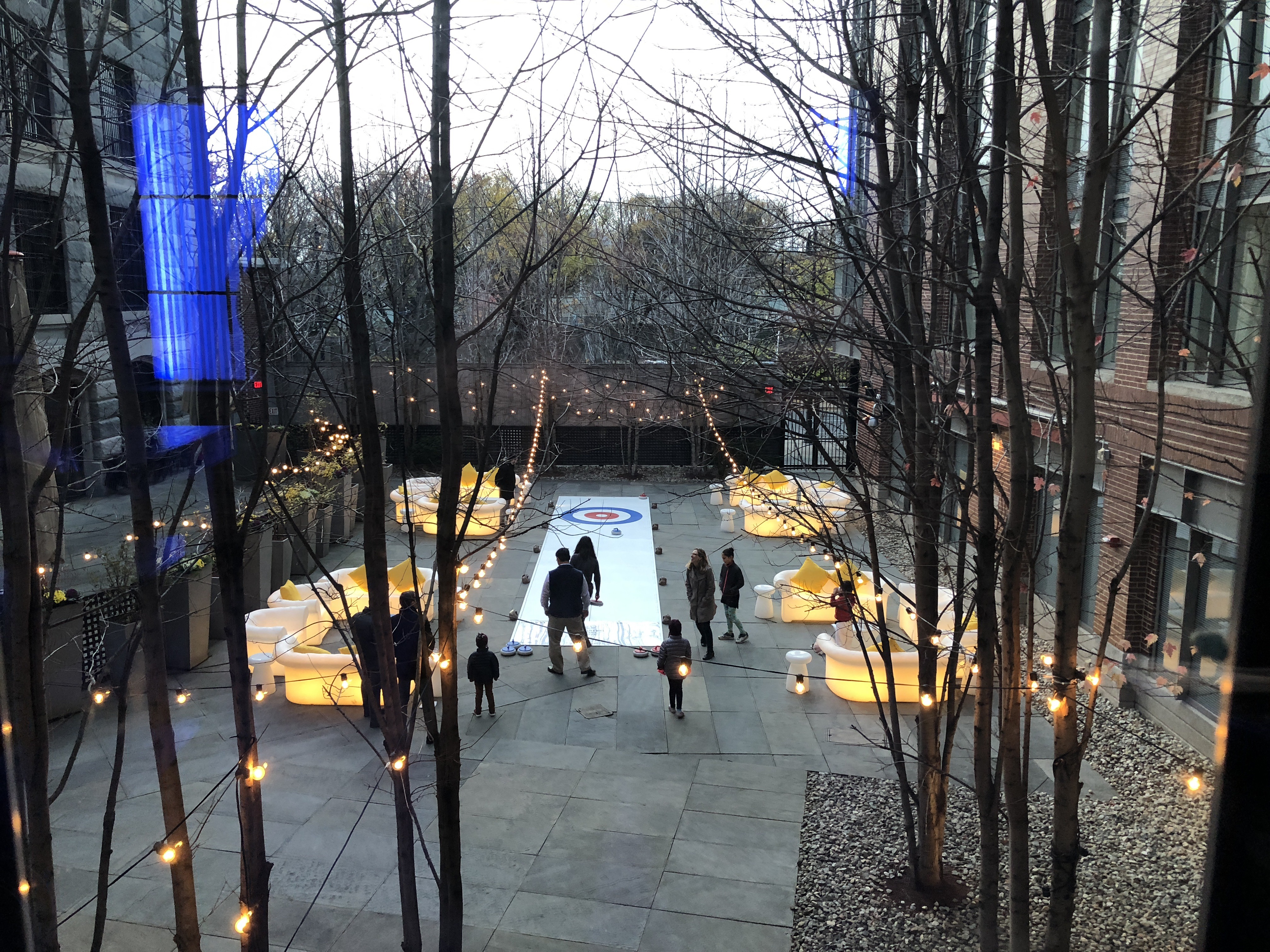 First things first, the purest of curling purists might chafe at the setup. A lot of the basics are missing: The lanes are not made of ice, for one. At least, not exactly. Instead, it’s a slippery synthetic material made by a company called PolyGlide, which mimics the real stuff well enough that you could actually skate on it if you wanted to. You may have seen it pitched, successfully, on Shark Tank.

The Liberty has set up a 40-foot long lane (about a quarter of the length used by the pros) of PolyGlide in the middle of its interior courtyard, with a red and blue target at its end. The courtyard is draped in picturesque hanging lights and there are four groups of plastic couches, which light up from the inside, set up around its perimeter. A set of LED floor lights keep the lane brightly lit at night. Hotel guests can watch the action from their rooms.

As any curling viewer knows, the most exciting part of the sport is the sweeping, but I regret to inform you there are no brooms involved, as there is nothing to sweep.

So, it’s not a traditional curling experience, sure, but the Liberty has a lot going for it that you can’t find anywhere else. If you stop by Mondays and Wednesdays, when the rink is available to book ahead of time in half-hour slots, bartender Mike Connolly is on staff to supply curlers with cocktails like a rum-spiked mulled hot cider called The Bonspiel (the word for a curling match), or the Great White North, which is like a Canadian Irish coffee, made with Crown Royal and maple syrup.

Connolly also doubles as a guide for newbies. “We’re probably the only hotel in the world with a curling concierge,” Nicole Gagnon, the Liberty’s marketing manager, tells me.

The plastic disks you play with, which are called “stones,” are not as big and heavy as the real ones, and they slide down the lane’s surface on metal disks that stick out of their underside. You play by kneeling at the center of the lane and flinging the stones as close to the center of the target as possible, ideally while knocking the other player’s out of the way. Typically it’s one-on-one, but you can play in teams of up to four per side if you feel like it. 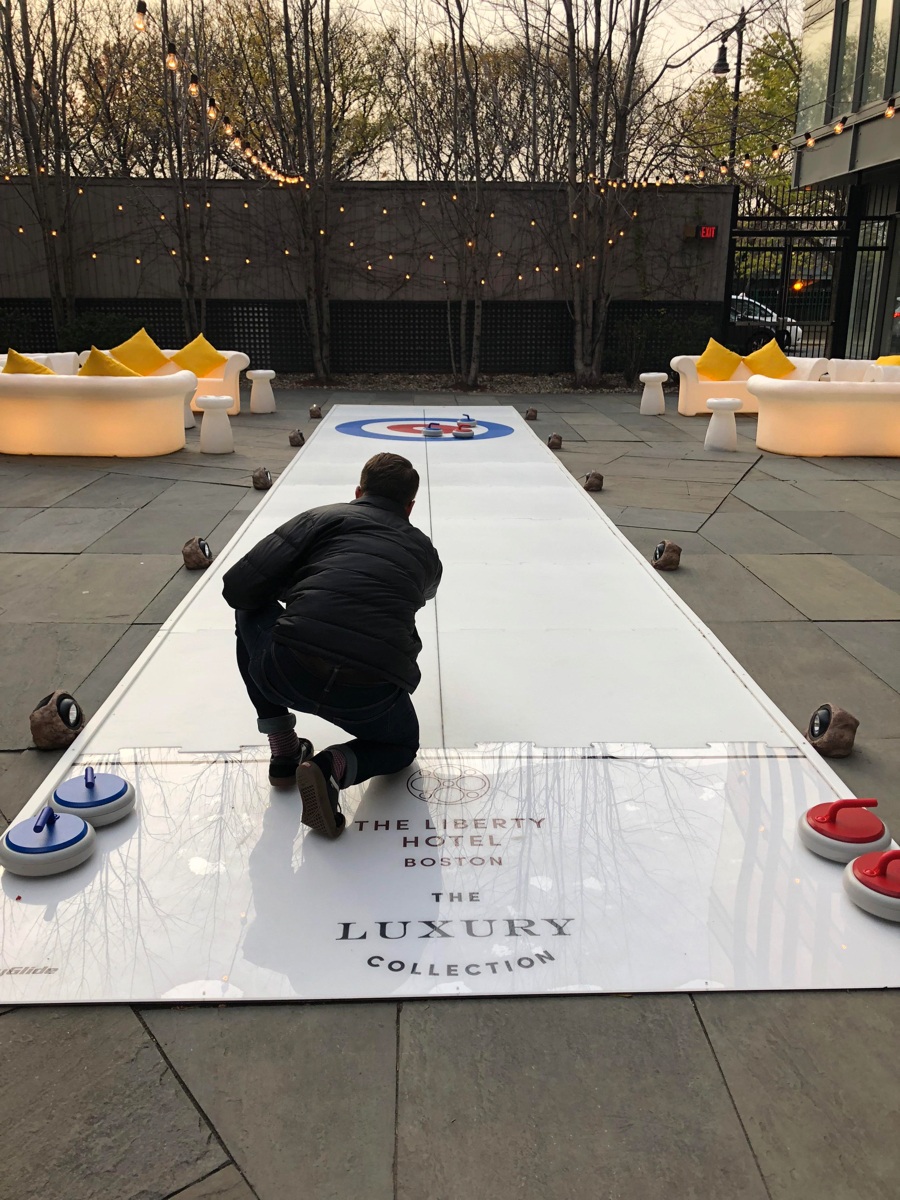 “You don’t have to throw it as hard as you think you do,” Connolly instructs us. He’s right. It took a couple minutes of practice to keep from flinging the stones into one of the lane’s raised edges (if you hit one, the stone doesn’t count and gets yanked from the game). You also have to adjust to the fact that the lane lists a little to the right. But once we figured it out and played a few rounds, we didn’t do half bad, and curling proved an addictive way to spend an afternoon. Our half-hour turn at the lane came and went quickly.

Even if it’s not regulation, we’re told the imitation setup has the blessing of the North End Curling Club, which stopped by the Liberty last week to give it a try. As long as people enjoy themselves in a curling simulation and maybe consider trying the real thing, they’re cool with it.

There appears to be a lot of interest. Connolly says most of the half-hour blocks for the next couple weeks have already been booked. Liberty’s staff tell us they’re considering adding more time slots, though, so keep your eyes peeled for that. You can also stop by on off days, but it’s on a first-come-first-served basis, and you won’t get the curling concierge.

So will Curling at the Liberty inspire a new generation of people to go beyond watching pros play on TV every four years, and start curling for real? I don’t know. But it’s definitely worth a visit.

Curling at the Liberty, which is complimentary, is open Monday and Wednesdays from 4-8p.m. November through February. It’s available to hotel guests and the public alike on off-days on a first-come-first-served basis, or can be booked for private events by contacting clink@libertyhotel.com. Drinks are $18.