The Smell and the Fury

Plans for a trash transfer station in Holbrook are tearing the South Shore apart. And the Lynwood Café, a legendary bar pizza joint in Randolph, is fighting back. 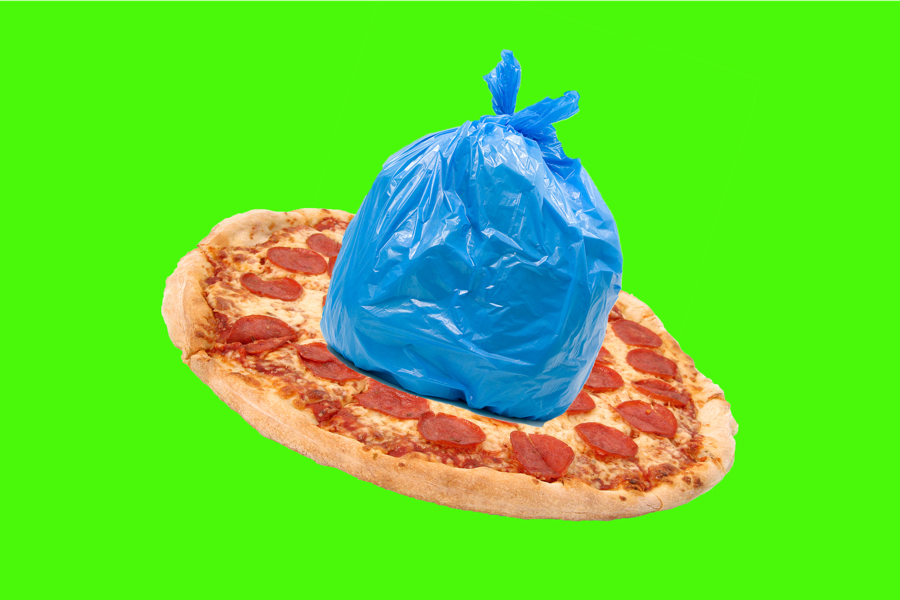 In the time since it opened in 1949, the Lynwood Café has become a fixture of the South Shore. It’s the kind of place that helped define the region’s signature dish: the cheesy, well-done, thin-crust concoction known as bar pizza. Served piping hot, Lynwood’s indulgent pies have fed hungry locals and visitors alike for generations, and not much has changed. At this wood-paneled outpost plunked on a busy intersection it shares with a car lot and metal-working shop, the recipe is tried-and-true and the prices are low. Entering its well-worn dining room, for many, is like coming home.

“A lot of multigenerational families have come in and eaten here,” says Steve Campanella, the latest family member descended from his great-grandfather to manage the place. “A majority don’t even live in the area anymore. They travel here just to eat here, and then travel back to Milton or wherever their family has now migrated to.”

But Campanella doesn’t just have family trips, sauce, dough, and toppings on the brain these days. The Lynwood has a big, potentially smelly, potentially catastrophic problem on its hands. Unless something changes, there are plans to erect a thousand-ton-a-day trash transfer station a mere 800 feet away from his restaurant’s front door, just across the town line in Holbrook. A critical vote on whether to green-light the site for the project is due from the town’s Board of Health Wednesday night.

“We’ve been trying to fight it,” Campanella tells me. “It’s gonna be 70 years next year we’ve been here, and this transfer station will single-handedly put us out of business.”

He cites the obvious problem: No one wants the pungent smell of a mountain of garbage wafting into a dining room, the odor intermingling with the pepperoni and cheese. There are other concerns, too. Vermin like mice and rats might swarm toward the garbage heap and end up filtering across the street, he worries. On top of that, he worries the crush of garbage trucks rolling through his intersection will make traffic a nightmare. Who, Campanella asks, would drive all that way and wait behind a parade of trucks just to eat “across the street from a pile of garbage?”

So Campanella has emerged as an unlikely leader in an inter-community dispute over garbage. From inside Holbrook, the facility can look like a boon. For other South Shore communities that surround it—and particularly across the town line in Randolph, where the Lynwood proudly sits—it’s a big, smelly nightmare. He’s determined to shut it down.

In the 12 years since plans first emerged for the site, Campanella and his sister Pamela have become familiar faces to local regulators, politicians, and the firm pitching it, called TLA-Holbrook, the LLC owned by the Canton construction company Barletta Co. He’s retained an attorney, enlisted the help of his sister (“it’s probably a whole second job for her,” he says), hired an expert on traffic and other nuisances, and, to date, has spent north of $20,000.

His advocacy has even extended to inside the Lynwood Café dining room, where he’s started regaling customers with his key points, coaxing them to attend public hearings, and handing out fliers for the cause. “STOP THE HOLBROOK TRANSFER STATION,” reads one of them. “DON’T GET DUMPED ON!”

He’s careful not to push it too far, though. As the pizza shop sits near at Randolph’s border, many of his clients are government employees and first responders in Holbrook—the kind of people who would benefit from the influx of cash to the town’s coffers the station would bring—so he risks alienating them if he ramps up his anti-garbage rhetoric too far. He’s disheartened when he learns just how many of his neighbors have no idea what’s happening, right under their nose.

“We’re doing everything we can,” he says. “But I’m getting concerned now. I don’t have any more money to set aside to pay lawyers or do any more studies. I’m kind of in a stuck place here.”

Campanella is not alone, for sure, in opposing the project. An anti-transfer station Facebook group that has drawn from several nearby towns has more than 450 members. A change.org petition (“Do not allow politics to impact the health and welfare of our small town”) now has more than 650 signatures. Sen. Walter Timilty, who spoke at a Board of Health meeting on the project, expressed “vehement opposition to this odious project.” Ed Gilbert, a Town Councilor, implored his neighbors on Facebook in June to contact Holbrook officials. “THIS MAY BE THE MOST IMPORTANT LETTER YOU WRITE!!!”

The issue has so incensed residents of Randolph that, if the project gets approved, town officials have promised to appeal to the Norfolk County Superior Court. For Kenrick Clifton, the president of its town council and a fiery critic of the plan, this isn’t just about smell he believes would emanate from the project, which he calls a “monstrosity”—although it is, of course, also about the smell. “As a community we don’t want to be defined by a dump site. We work too hard,” Clifton says, ticking off as examples Randolph’s new investments in the town’s police and fire departments, and a brand-new community center. “We don’t want our quality of life to be reversed. This is extremely important to us.”

If you want to know why this massive pile of trash is ending up in his front yard, Campanella says all you have to do is follow the money. Holbrook, he notes, stands to benefit in three major ways: hundreds of thousands of dollars a year in fees from the facility, a clean-up of a site contaminated long ago by a chemical plant, and free trash removal. Huge costs, paid for by someone else, are hard to turn down.

And it’s true, officials say. It would be a huge deal for the town. “The project is an exciting proposition for the town of Holbrook, there’s no question about it, relative to the potential revenue to be gained,” says Town Administrator Tim Gordon. Holbrook Selectman Richard B. McGaughey, according to the Quincy Patriot Ledger, called it “the biggest financial boon we’ve ever had.”

Campanella thinks that’s fundamentally unfair. Why, he asks, should such a huge decision be influenced by such a big pile of cash benefiting only one community, when so many neighbors (particularly Randolph, and particularly the Lynwood Café) have to deal with all the potentially pungent side effects? He calls his little restaurant along the train tracks a “piece of what America really is—immigrants starting a company with a pizza shop, and spending 70 years here in the community.” And maybe it could all end up in the trash. And for what?

Nobody wants a garbage pile in their backyard. Or, in the Lynwood Café’s case, a few hundred paces out front.

But Marc Goldstein, the lawyer for the firm that has been petitioning to build the facility, says everyone is overreacting. As a specialist in trash-related projects who’s overseen a handful of them, Goldstein says he has learned there is always vocal opposition to seeing trash end up stored, sorted, packaged, and shipped near their families, no matter the particulars. Most people drag their trash to the curb and never see it again, and like it that way.

In a state that is pretty much built out, though, we’re running out of space for landfill, fast, and we can’t afford to ignore it. “There is a looming crisis for where trash will go in Massachusetts,” Goldstein says, “and transfer stations are a piece of the solution to that problem.”

The Massachusetts Department of Environmental Protection says he’s right. According to John Fischer, the agency’s branch chief for commercial waste reduction, a “significant amount” of the Massachusetts’ landfills will close in the next decade. That means the state has to pick from a menu of solutions for handling all that garbage, from more recycling and composting centers to waste-to-energy facilities and anaerobic digestion plants.

There are only so many plots of land suited to this sort of thing. Here’s the solution TLA-Holbrook has proposed for the one along Holbrook’s border with Randolph, and not far from the Lynwood’s front door: The 15-acre site along train tracks near the Holbrook/Randolph commuter rail stop would be turned into a massive, 22,300 square foot warehouse. Trucks loaded with trash from neighboring communities would drive inside through a set of doors, and garbage dumped there would be sorted, loaded onto freight trains and sent away to states with landfill-space to spare, like Ohio.

Goldstein walks me through neighbors’ most common complaints and anxieties, one by one. First, the smell: he says experts hired by his client determined the odor from the facility wouldn’t be in breach of the the state standard that says a certain level of stink is alright so long as it isn’t a “nuisance, danger, or detriment.” Citing that study, he’s confident the smells would not disrupt the Lynwood Café, and that it would likely never exceed the odor that might waft out of the pizza shop’s dumpster. “We even went and had pizza there so that we could make sure that our odor expert knew precisely what he was talking about,” he says.

He also distanced the project from the pungent boogeyman of the South Shore’s garbage war: the Covanta Transfer Station near the Braintree commuter rail stop, the smells of which are so powerful they penetrate cars on a nearby highway. Campanella talks about the Braintree transfer station a lot. “It’s a big pile of trash sitting on cement in the baking heat,” Campanella tells me. “Like I said to one of the guys that wants the transfer station, I said, ‘Hey if you want, let’s go grab a picnic basket and some food and go down to the Braintree T station and we’ll set up camp and have a picnic. If you can choke down your lunch smelling that, more power to you. But you can’t.'”

But Goldstein says you can’t compare the Braintree station to the one planned for Holbrook. For starters, all the garbage-handling at the Holbrook station would happen inside, not outside, and trucks would access it via automatic doors that open and close quickly to keep the smell, noise, dust, and litter out of the neighborhood. “Most people are familiar with the landfills and transfer stations of many years ago,” he says. “The Braintree transfer station, which many of the people in Holbrook drive past on a regular basis, is not a poster child of transfer stations, to be perfectly honest.”

Why does it have to dump on him?

Update 11/9/2017: The three-member Holbrook Board of Health voted unanimously Wednesday night to approve the site for the transfer station, a major step forward for the project. TLA-Holbrook’s proposal will still have to clear the town’s Planning Board and Conservation Commission, and may face an appeal from neighboring towns to the Superior Court.