It's partnering with a Silicon Valley company, but is it street legal? 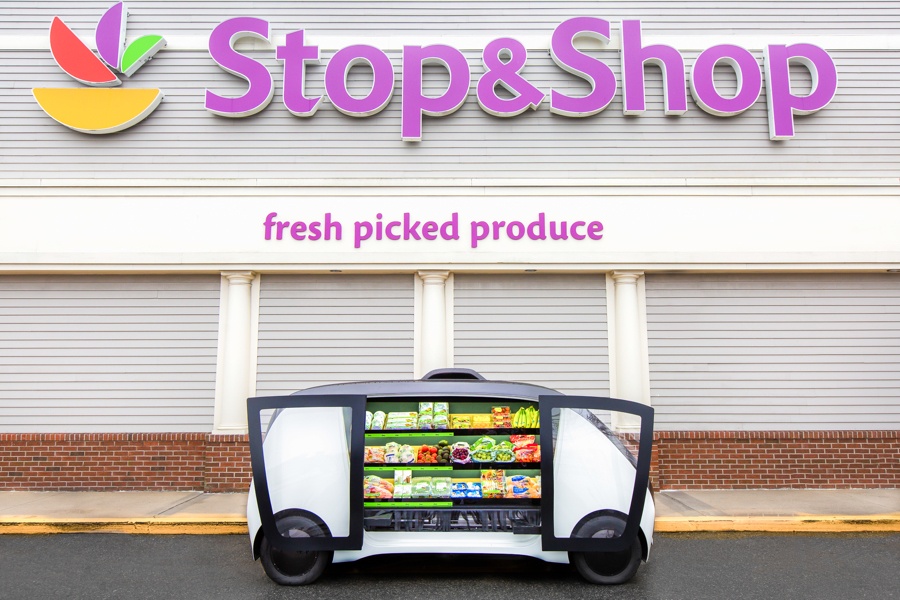 At this point in Boston, we’ve gotten used to the idea of driverless cars taking their first baby steps on our streets. But is the region ready for its first completely driverless vehicles? That’s a question that Stop & Shop appears ready to confront in the coming months.

The Quincy-headquartered supermarket chain announced Wednesday that it plans to roll out a fleet of “self-driving grocery stores” in Greater Boston this spring, but it may be no easy promise to fulfill.

According to an announcement from the company, customers will soon be able to summon a Stop & Shop-branded refrigerated car with an app, and then, when it arrives, unlock a set of sliding doors and pick from an assortment of groceries and meal kits. It’ll be programmed to detect which items are selected, and then charge a user’s account accordingly (a la Amazon Go) before heading off to its next stop. Except there won’t be a friendly delivery driver in the car’s front seat—there won’t even be a front seat, as employees will steer the vehicles through neighborhoods from behind a computer in a control center.

To bring this vision to life, Stop & Shop has teamed up with two-year-old San Francisco startup Robomart, which hopes to put its all-electric driverless vehicles–which are about 6 feet tall and 12 feet long, and equipped with cameras and Lidar to measure distance with pulses of light—on public roads for the first time.

This spring, we’re bringing the grocery store to you! As part of an engagement with @robomart, we are launching driverless vehicles to deliver a selection of our produce, meal kits, and convenience items directly to consumers in the Greater Boston Area. https://t.co/wuFtd0WEId pic.twitter.com/jUiNfygkXD

Whether this is all possible, though, remains an open question.

For starters, MassDOT has yet to sign off on the experiment. State rules would likely require Robomart and Stop & Shop to submit an application, pass an RMV inspection, and prove the vehicles can be operated safely before they can hit the streets. It’s unclear whether that will fly, as the state has so far required driverless car companies to have a driver inside each vehicle during test rides who can intervene in the event of an emergency.

“MassDOT has had informal conversations with [Robomart],” department spokesman Patrick Marvin says in a statement, but “has not received an official testing application.”

Boston officials also say planning for such a feat is still in the earliest of stages. “The City currently has an open process for any type of autonomous vehicle partner looking to use public roads to apply for testing in Boston,” Boston Transportation Commissioner Gina Fiandaca says in a statement, and the Robomart “has not begun that process in the City of Boston.”

Robomart CEO Ali Ahmed says his company’s vehicles might not actually be subject to the state’s safety rules, however, because they are “teleoperated” via computer by a flesh-and-blood employee. “We don’t necessarily fall under that requirement,” Ahmed says. “But because of the fact that they’re driverless, we are taking all the steps and all the measures necessary to make sure all the stakeholders are comfortable with that approach.”

Robomart has never actually put its roving minimarts to commercial use on public streets like this, and has so far only conducted tests at its facility in Alameda, California. Plans to deploy them elsewhere in the Bay Area, which were announced last summer, never materialized.

Bryan Reimer, associate director of the New England University Transportation Center at MIT, is skeptical of the grocery store’s plans. “I would be surprised if the city would allow such a thing,” he says.

The project, he says, would not align with an agreement the state reached with Boston and a group of other cities and towns in June, which allowed driverless car testing outside of the Seaport neighborhood for the first time, but also established a set of stringent universal safety guidelines and an application system.

Reimer notes that the Stop & Shop experiment does highlight “an interesting gray area” when it comes to the law, though. “Is a vehicle operated by joystick or a wheel through a remote control still being driven? Or is it truly still quote-unquote driverless?” Reimer asks. “I don’t know.” Another company, called Phantom Auto, alarmed safety activists last year when it began driving teleoperated empty cars on California streets, but its tests were deemed legal by state authorities.

It’s also possible that because the vehicles top out at 25 miles per hour, they may qualify for waivers of certain safety rules that are extended to low speed vehicles, like golf carts.

A MassDOT spokesman asked to weigh in on these tricky legal questions did not have a response by Thursday morning.

Ultimately, Reimer predicts Stop & Shop and Robomart are likely to have their plans shot down. “I think it’s an illustration of two companies that have not done the appropriate due diligence within a city that has very clearly defined what due diligence is required,” he says.

Stop & Shop, which has more than 400 locations in New England and New York, has not picked a site for the launch of its driverless car program, and did not say how many vehicles it hopes to put into use this year. The state allows the use of driverless vehicles in Arlington, Boston, Braintree, Brookline, Cambridge, Chelsea, Malden, Medford, Melrose, Newton, Revere, Somerville, Weymouth, Winthrop, and Worcester, as well as roadways run by the DCR.

This isn’t Stop & Shop’s first foray into robotics. The company announced this week it’s deploying googly-eyed robots, each named “Marty,” to roam the aisles of its stores looking for spills.