A Worcester Baseball Team’s Billboard Declares “The Clap Is Back!”

A roadside ad for the Worcester Bravehearts raises some questions. 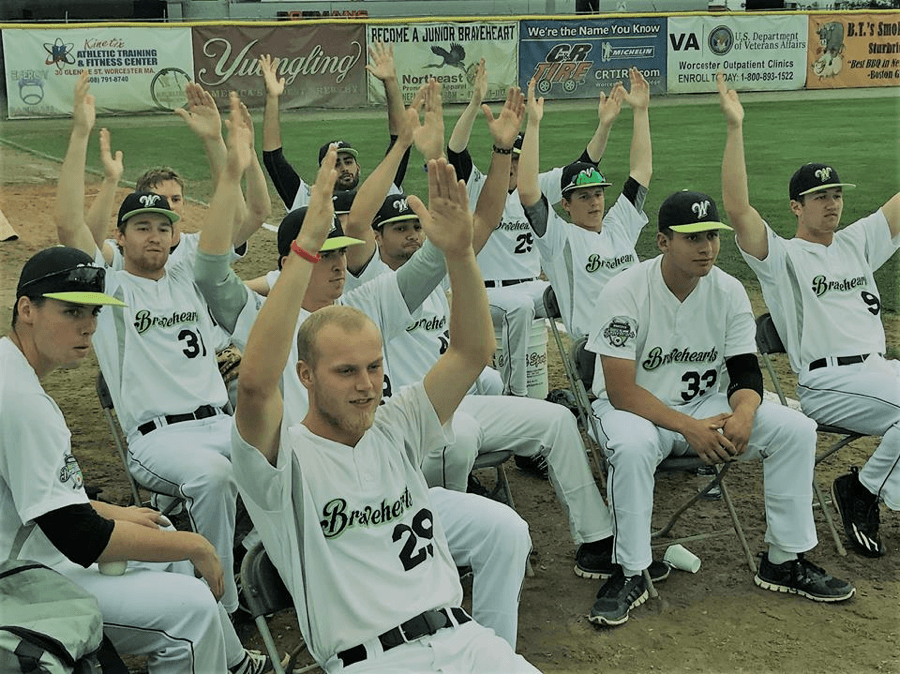 Photo courtesy of the Worcester Bravehearts

Spring has sprung in Worcester, and we all know what that means. The sun is out, baseball season is just around the corner, and, of course, “The Clap Is Back!”

That’s according to an ad for the summer collegiate baseball team the Worcester Bravehearts, which the club’s official Twitter account shared on Wednesday. A photo the team tweeted shows the interestingly phrased slogan printed in giant block letters on a billboard, which could be found at the side of Route 290 last year.

Despite the impression you might have gotten from the tweet, which has been “liked” more than 2,000 times, Boston has learned the billboard did not return to its spot along the highway in 2019. Bravehearts General Manager Dave Peterson says the photo is of a billboard that ran for about a week last season to promote opening day for the team,  which happened to land on May 30 in both 2018 and 2019.

So the photo was of an old advertisement, not a current billboard. Still, its reemergence online prompted some questions this week.

“The clap,” for those who don’t know, is a tradition for Bravehearts fans, who clap their hands over their heads whenever the home team scores, while the catchy and meme-friendly song “Shooting Stars” by Bag Raiders plays through the stadium’s speakers.

But to many who saw the photo of the billboard online—and, I’ll go ahead and assume, the thousands of commuters who drove by it last year—”the clap” means something… else.

So the team’s social media has been flooded with snarky replies. “I think they have antibiotics for that!” one person wrote on Twitter. “I’ll make sure to wipe down my seat before sitting at the games,” wrote another user. At least one commenter wondered whether the double entendre of a promotion was actually a shrewd publicity tactic: “HAHAHA Galaxy brain marketing right here.”

I’m just not sure “The Clap is back” is the message Worcester should be sending. https://t.co/gwWpYBj8Ig

Not a sports guy but… something seems off here… #Worcester https://t.co/GK4C2hx3P6

But Peterson says we’ve got the wrong idea. “Time for folks to get their minds out of the gutter,” he tells me in an email. “Gotta love these online commenters. My advice to them: get back to work.”

Formed in 2014, the Bravehearts compete in the Futures Collegiate Baseball League each spring and summer at Hanover Insurance Park at Fitton Field. Competition is brewing for the team, as Worcester is in the process of building a new stadium for the Pawtucket Red Sox, which will be relocating to the city in 2021. That hasn’t always been well-received by the Bravehearts, whose owner John Creedon, Jr. has publicly raised concerns about the impact the city’s investment in the PawSox will have on his five-year-old franchise.

Sure, fans may soon flock to Kelley Square for AAA games, local beer, and what will apparently be a vibrant new shopping and entertainment district. But as the new billboard has reminded us all, the Bravehearts have something the PawSox don’t: The clap.

An earlier version of this story reported incorrectly that the billboard reading “The Clap Is Back” was an advertisement for the Bravehearts’ 2019 season.