An Attleboro man says one of the iconic swings smashed into him after Pride. 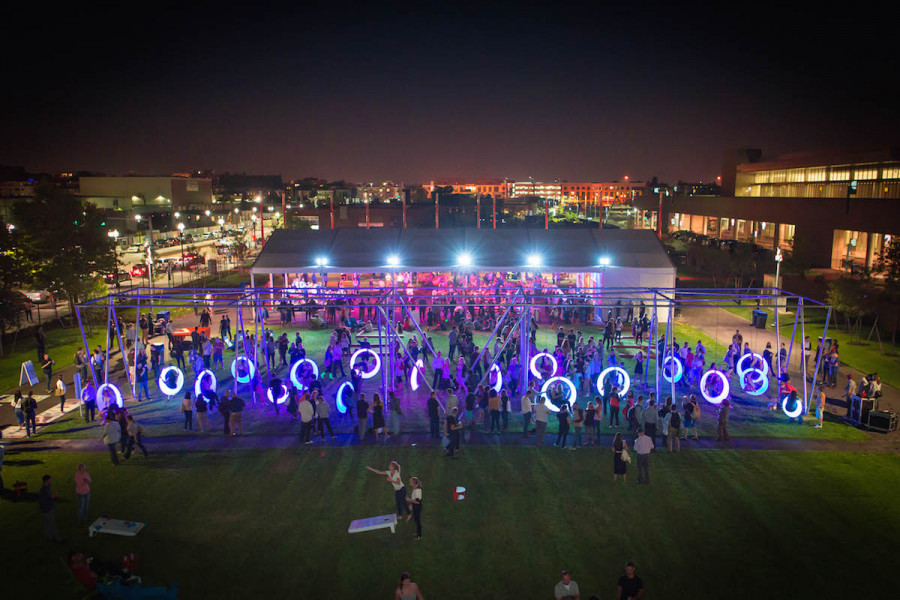 As you know if you’ve had any contact with social media in Boston since they debuted in 2014, the glowing swings at the Seaport’s Lawn on D are iconic at this point—the attraction on a giant plot of land that’s now an adult playground. Thousands upon thousands have taken the giant, illuminated circles for a spin, and there’s plenty of evidence on Instagram that the five-year-old public art installation is a beloved, photogenic good time.

That is, until it isn’t.

Attleboro’s Tyler Fernandes tells 7 News Boston he was hanging out at the Lawn on D near the swings after Pride last weekend when, according to reporter Justin Dougherty, “suddenly one of the poles became unhinged, dropping two young girls, and a large metal pole came crashing down, cracking open Tyler’s head.” Fernandes required ten staples at the top of his head and suffered a concussion, he says.

The Massachusetts Convention Center Authority, which runs the Lawn on D and the swings, says a mechanical issue caused by misuse was to blame for the incident.

“There is signage posted on how to use the swings safely, but they do experience significant abuse during the season with the biggest challenge being multiple adults attempting to share one swing which is not permitted,” MCCA spokesman Nate Little says in an email. “We remind our guests that the swings are also an art installation and to use them as designed and intended. In this case it appears to be an unfortunate accident.”

In the meantime, Little says new safety harnesses have been installed to keep the poles attached to the swings from crashing down in the future. The swings will also now be inspected once per week.

So next time you’re taking several hundred selfies on “Swing Time,” remember to take it easy. And watch your head.