The star of a viral clip outside Fenway Park says her over-the-top Boston accent and vibe "might have been a little performance art." 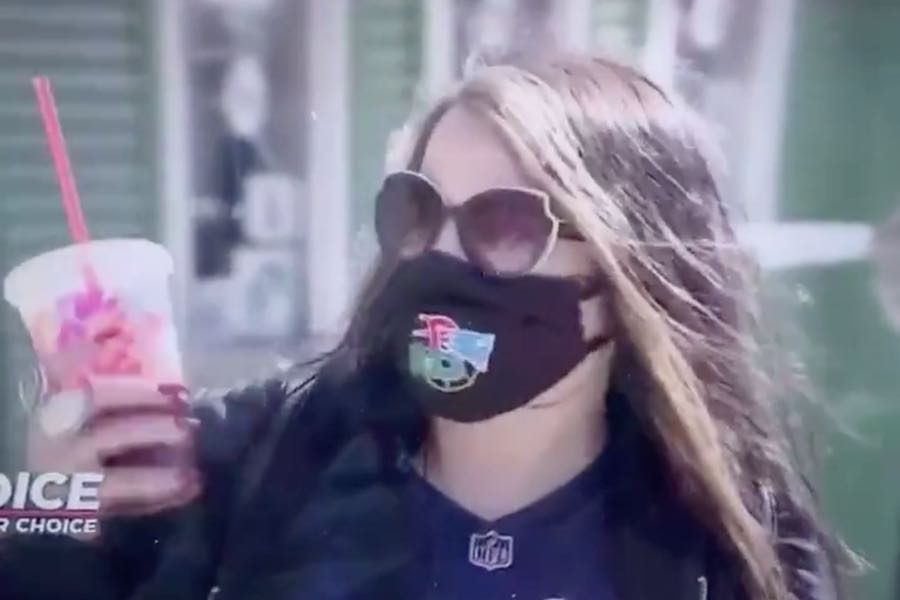 Laura Eastaugh knew exactly what she was doing when she marched up to Fenway Park on Saturday, the first day of early voting at the beloved ballpark.

Decked out in a Pats jersey and matching New England sports-themed face mask, and clutching a medium iced coffee, she looked the part of an extremely Boston voter heading to the polls in the most extremely Boston locale.

“I was thinking I had to do all the stereotypical Boston things because it was gonna be a once-in-a-lifetime opportunity to be able to vote at Fenway Park,” the 29-year-old Brighton resident tells me. “So I threw on my Cam Newton jersey—number one, my favorite player!—and went down there to cast my vote with my roommate, and my Dunkin’ Donuts in hand.”

On her way, she says, she had an epiphany. As an ardent supporter of Bernie Sanders, she planned to hold her nose and vote for Joe Biden. The former vice president wasn’t her first choice, but politics, she decided, is a “team sport.” The irony wasn’t lost on her that she was about to take one for the team, at her home team’s home base. She wanted to share this epiphany with the world.

Once on scene she spotted a local news videographer interviewing voters, and seized her moment. And after all, if there’s anything Boston sports fans love more than anything, it’s mugging for the cameras outside Fenway.

The rest is viral internet history.

“I wanted to vote at Fenway because we’ve all been cooped up inside for a little bit, and I got my Dunkies,” she says from behind giant dark sunglasses, in an impeccable Boston accent, and with all the tenacity of a Sox fan on game day. “I’m ready to vote for Joe Biden but I wish I was voting for Bernie Sanders, but it’s a team sport!”

Boston will never not Boston as hard as it can and I love it so much. pic.twitter.com/p5qN8HH4pe

If any footage could have better captured the vibe of an early voting sight at the home of the Sox, I can’t imagine what it would be. So naturally a short video of the clip, first posted on Monday morning, has gone mega-viral on Twitter and TikTok. And it’s turned Eastaugh into an instant star. “For my friends who don’t live here: This woman is our Prime Minister,” one person wrote on Twitter. “Queen,” wrote countless others.

And that, she says, is what she was hoping for.

The thing is, Eastaugh doesn’t actually talk like that. At least, not all the time. “It might have been a little performance art,” she says over the phone, with a decidedly less Boston twang.

She tells me she perfected the accent seen in the video years ago while working in child support enforcement for the Massachusetts Department of Revenue, where she learned that it came in handy. “I’ve always lived in Boston, so I’m not faking a Boston accent or anything like that,” she says, but “when I would use my cute girly voice like this sometimes people would walk all over me on the phone, so I started doing an exaggerated Boston accent, and people stopped trying to fight with me on the phone so much.”

She thought leaning into the Boston-ness might increase her likelihood of getting on the evening news, and give her a bigger platform to talk some more spurned Bernie voters into pulling the lever for Biden. And that is exactly what happened: The tweet with the clip in it has been shared and quote-tweeted thousands of times, and in just a few hours had been viewed more than a million times on TikTok.

“All of Bernie’s messaging has always really spoken to me, that he says things like ‘this is our revolution,’ and that ‘it’s not about me, it’s about us,’” she says. “So I’m doing anything I can do to get the message out there that I feel you, I understand your pain that we’re not voting for Bernie like we wanted to.”

If you do want to follow in her footsteps, the city currently has a host of early voting sites in several neighborhoods. The Fenway site was a one-off this weekend, but more than two dozen other locations around the city will be open through Friday, October 30. Unlike on Election Day voting, anyone in the city can vote early at any of those sites.

For now, Eastaugh is basking in the instant fame wrought by her viral clip, and has made it clear she’s open to an endorsement from Dunks in case they want to send her some coffee, or if they can help pay off her student loans, or maybe take care of the $40 parking ticket she incurred that day.

And if anyone at City Hall needs an official spokeswoman for its early voting program this year, she says she is more than willing to take on that role: “I’m wicked available, khed.”