Behind the Scenes at Vinland, Portland’s Most Polarizing Restaurant

At Vinland, chef David Levi takes the locavore philosophy to the next level—for better or for worse. We spent a dinner service at the restaurant to see the chef in action.

In our January issue of Boston, Maine-based writer Katy Kelleher discusses the controversial, staunchly locavore restaurant Vinland. Ahead, a more in-depth look at his mission and his restaurant. Chef David Levi, chef-owner of Vinland in Portland, hard at work on a dish of raw beef with pickled onions, cranberry, and horseradish.

Chef David Levi can be polarizing. His insanely ambitious, 100 percent local, high-minded eatery Vinland has been open for one year as of this month—a measure of success in itself—but he remains a controversial figure in Maine. This is partially because of his self-described “radical” politics, the sheer audacity of his goal (surviving a Maine winter is hard, never mind foraging your way through it), and also because, months before Vinland had opened its doors, he had already written and published his “The Vinland Manifesto” on the restaurant’s Kickstarter page.​

There are a few things in that last sentence that might feel off-putting to some. First, yes, he did fund his restaurant with the help of Kickstarter: In July 2013, he reached his $40,000 goal with five grand to spare. Second, there’s that whole manifesto thing. Originally deemed “The Vinland Manifesto,” the screed has now been renamed the restaurant’s “mission.” Organized by bullet points and running upwards of 1,500 words, it’s a formidable bit of reading. In it, Levi expresses his frustration with consumerist culture, food inequality, the industrial food system, and his fellow chefs.

“It’s time for chefs to grow up. Abusiveness and tantrums are not marks of genius but symptoms of immaturity and sociopathy,” he writes. “The long reigning kitchen culture, defined by negative reinforcement, shaming, misogyny, racism, homophobia, glorified substance abuse, callousness toward living beings, wastefulness, and disdain for ethics, must go.”

With those kind of sweeping sentiments, it’s no wonder other chefs have their backs up.

But here’s the thing: Levi truly believes in everything he says. This is a person who has gone all-in. He has laid it all out there, welcoming the criticism and potential conflict in the hopes that it will spark radical, social change in the food world. In his daily life, he practices what he preaches, purchasing and consuming only items that line up with his values. You wont find any conventionally grown sugar in his pantry, not because he never eats cane sugar, but because he strongly objects to the conditions under which it is produced. 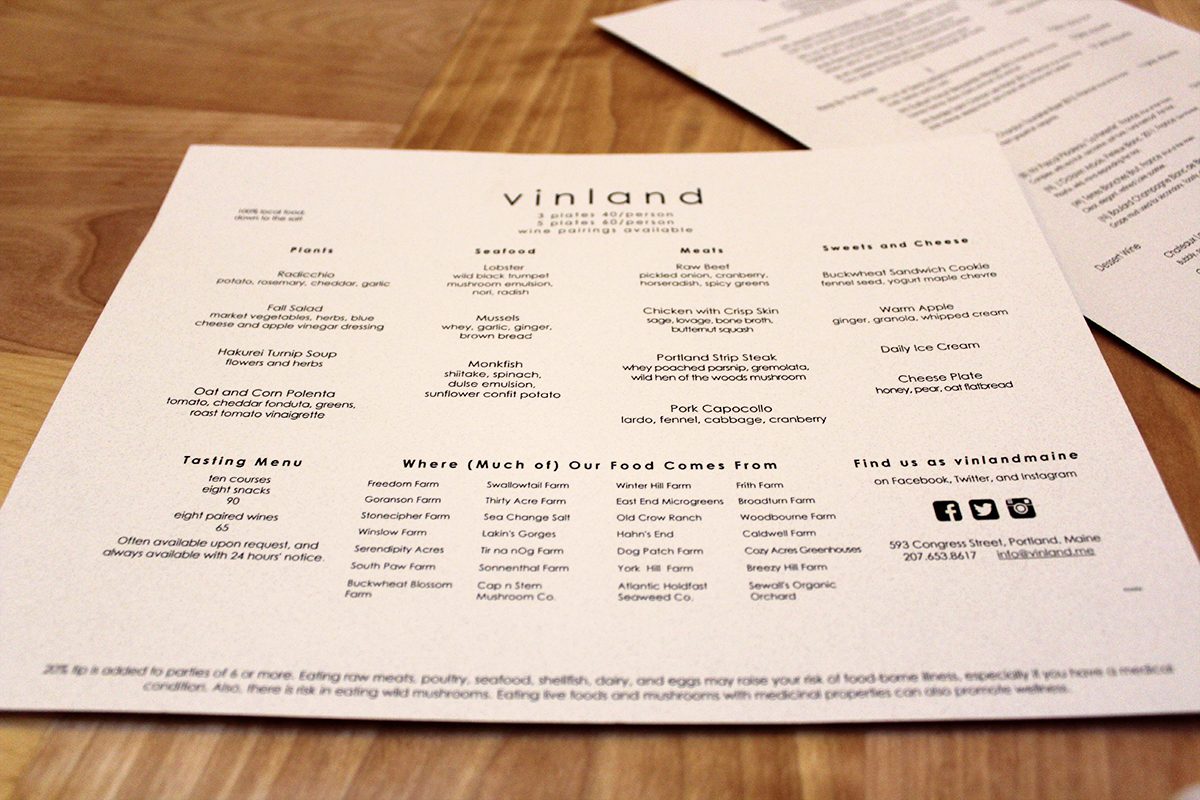 Chef David Levi frequently switches up the menu to highlight what's in season. 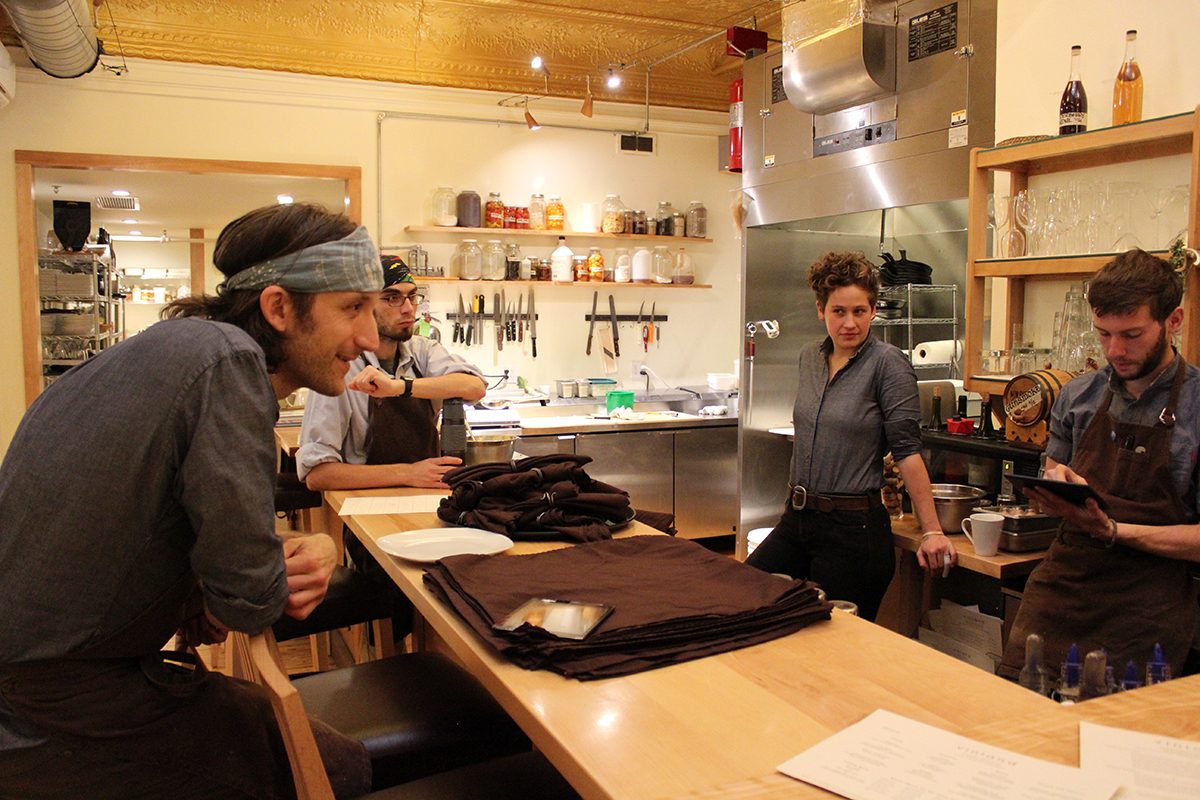 Before dinner service, Levi talks shop with his chefs and servers. 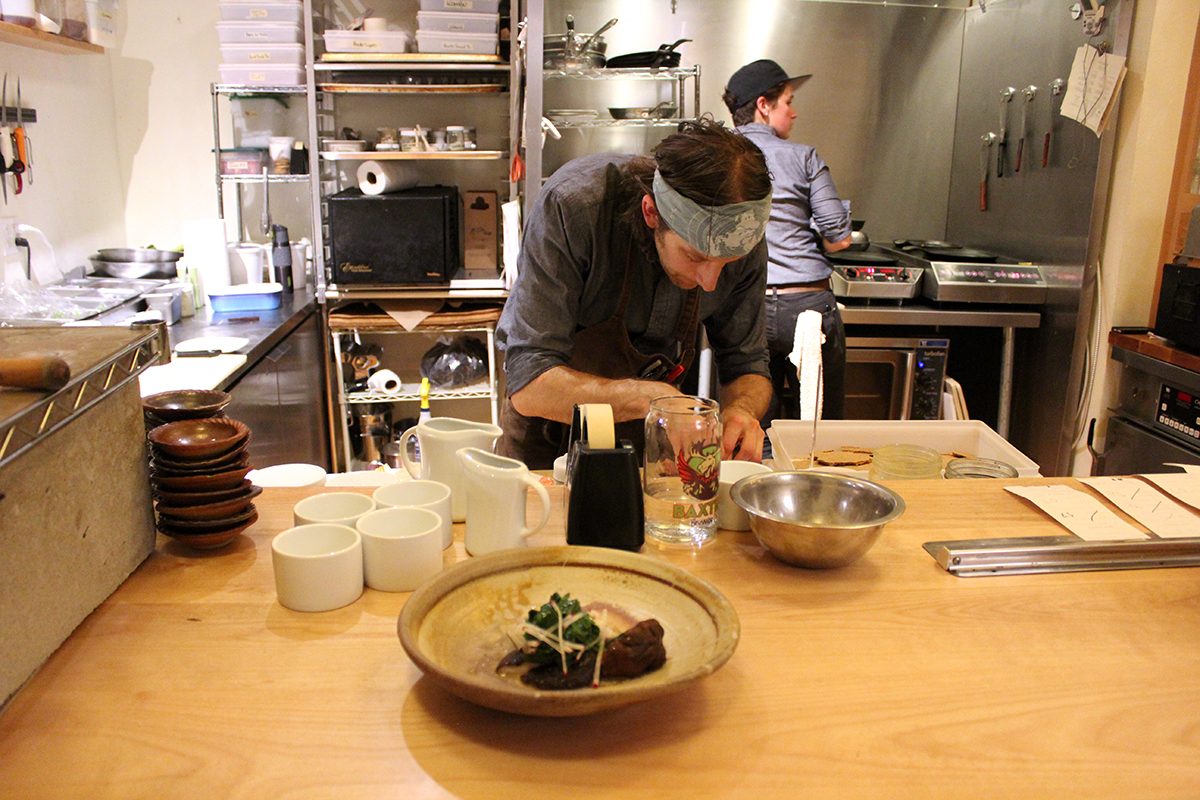 The kitchen at Vinland is open, allowing diners to watch the cooking and plating action. 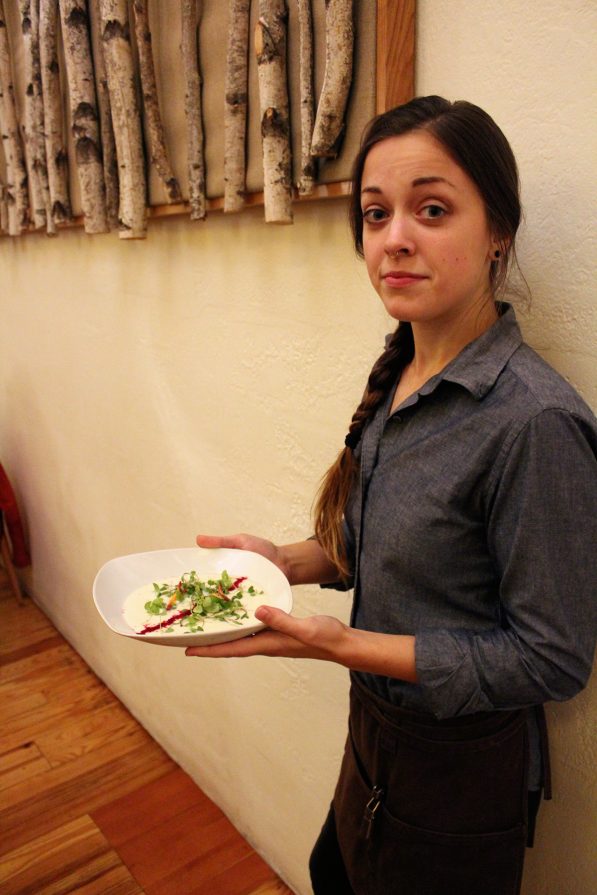 A server with Levi's signature hakurei turnip soup, made with yogurt and onion and dressed with flowers and herbs 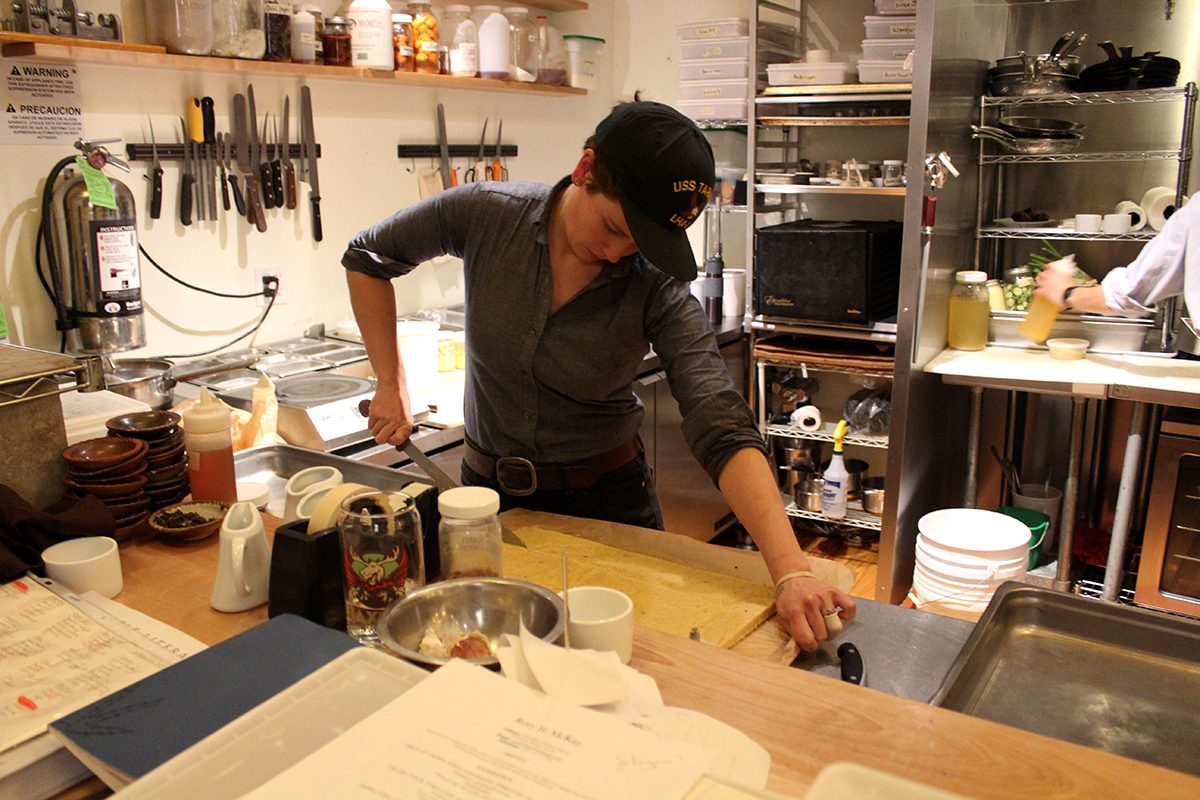 All photos by Katy Kelleher 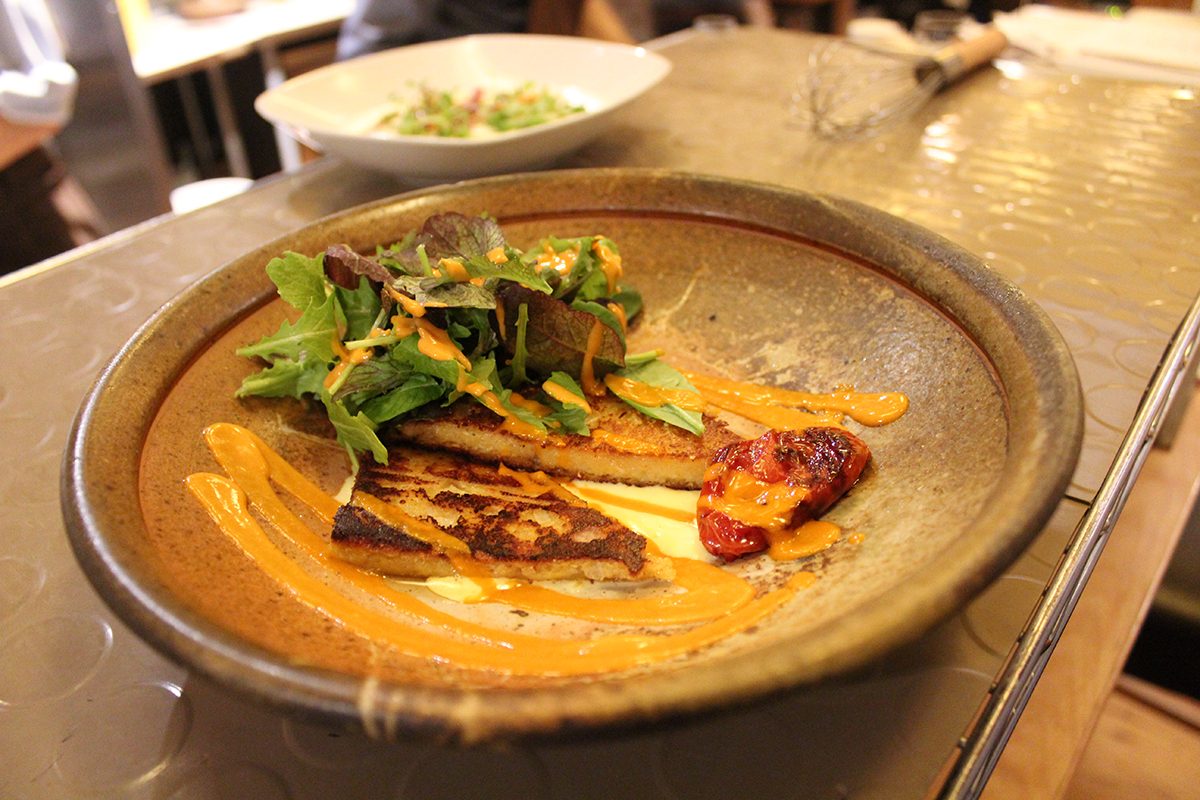 The finished dish of oat and corn polenta with roasted tomatoes, cheddar fonduta, and greens. 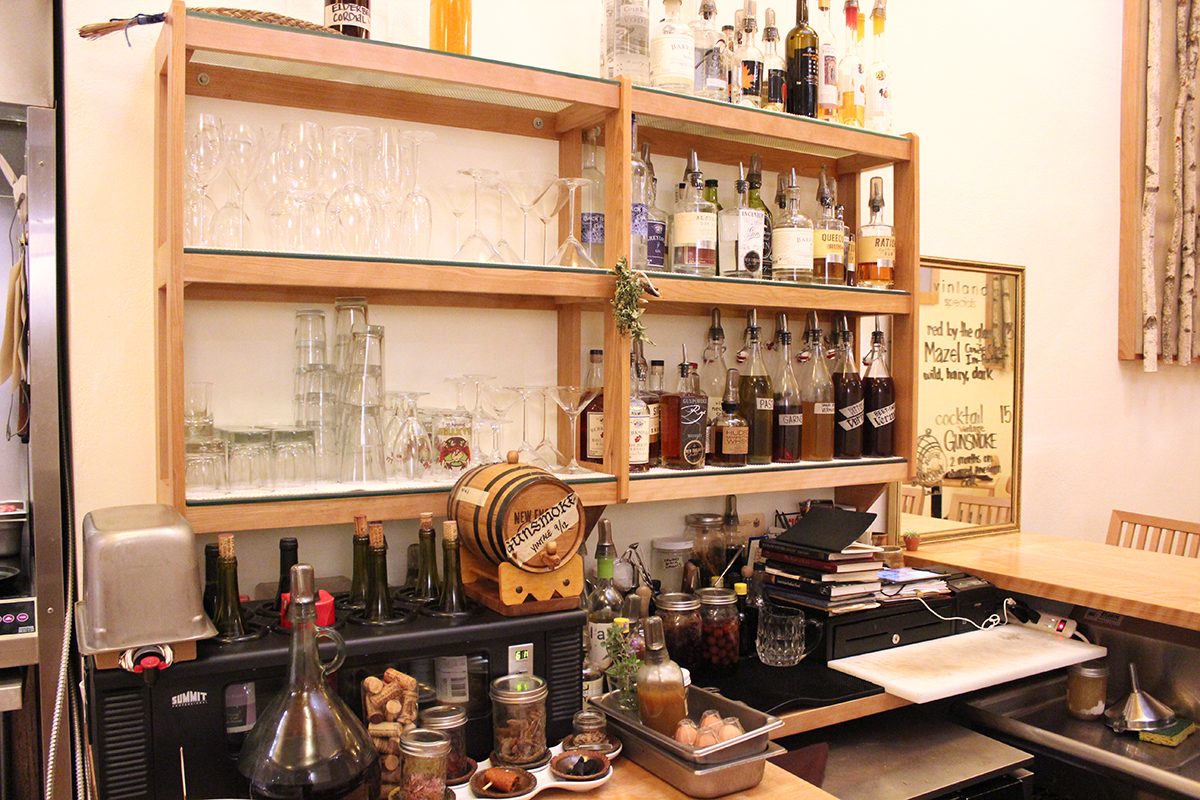 Behind the bar at Vinland, find barrel-aged concoctions and a bevy of house syrups made from produce like carrots and beets. 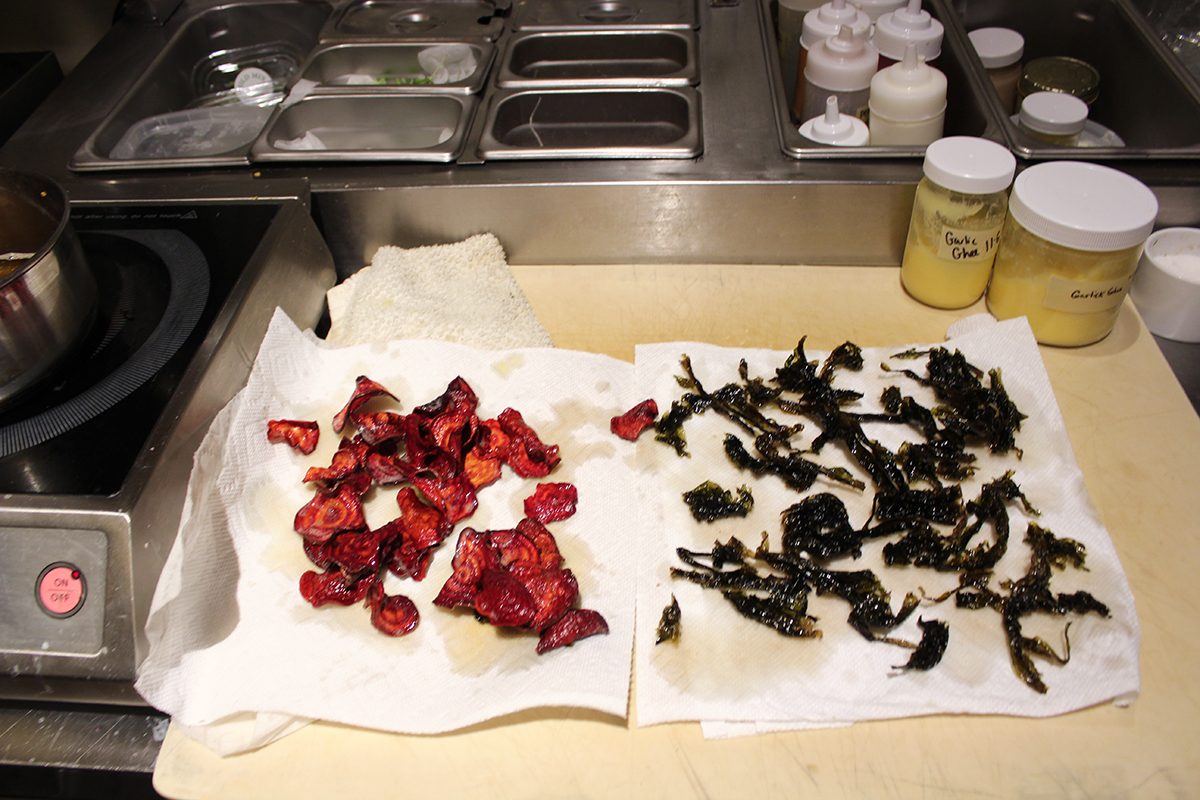 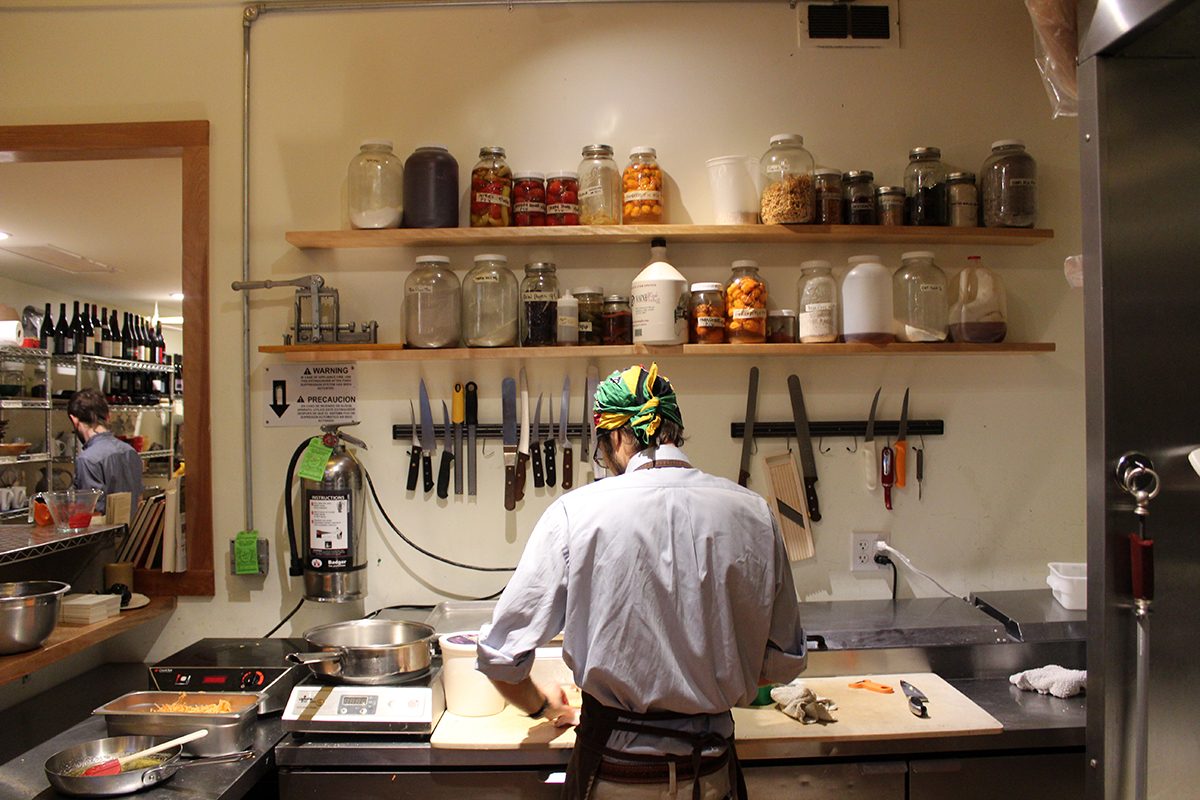 Another glimpse into the kitchen. 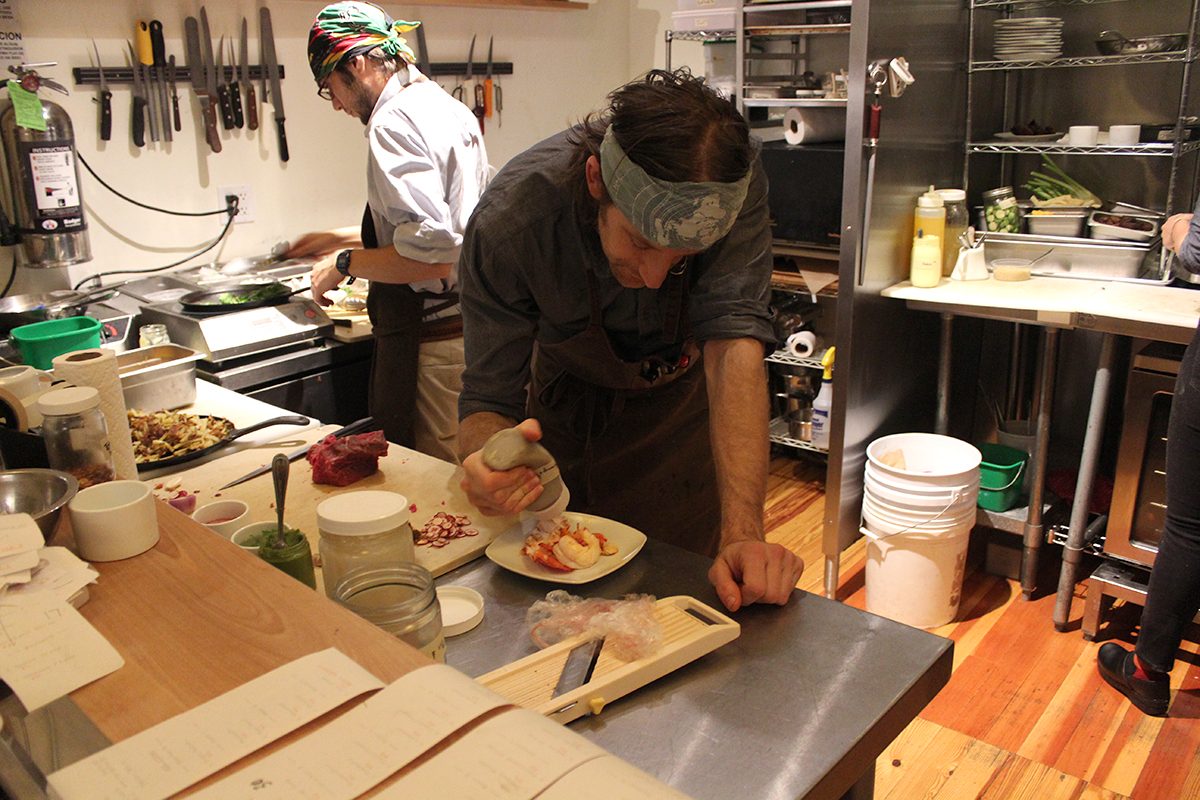 Levi plates a dish of lobster with mushrooms and radish. 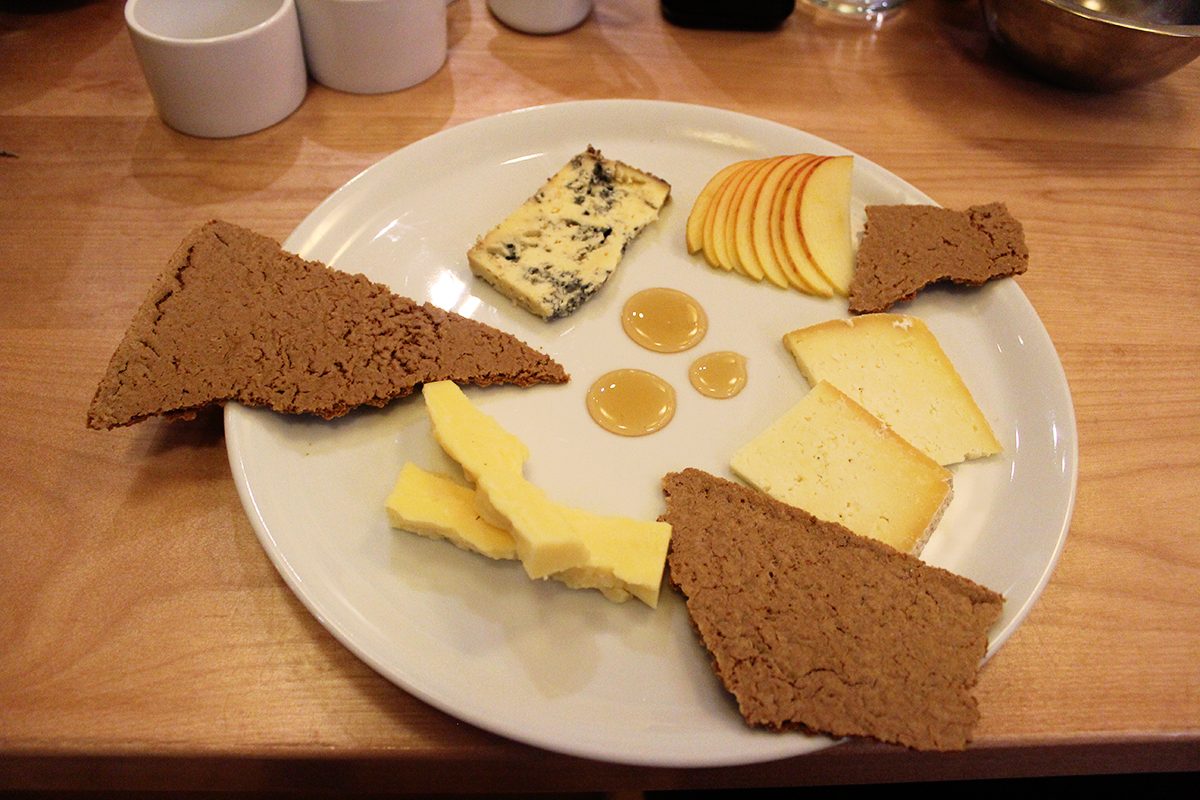 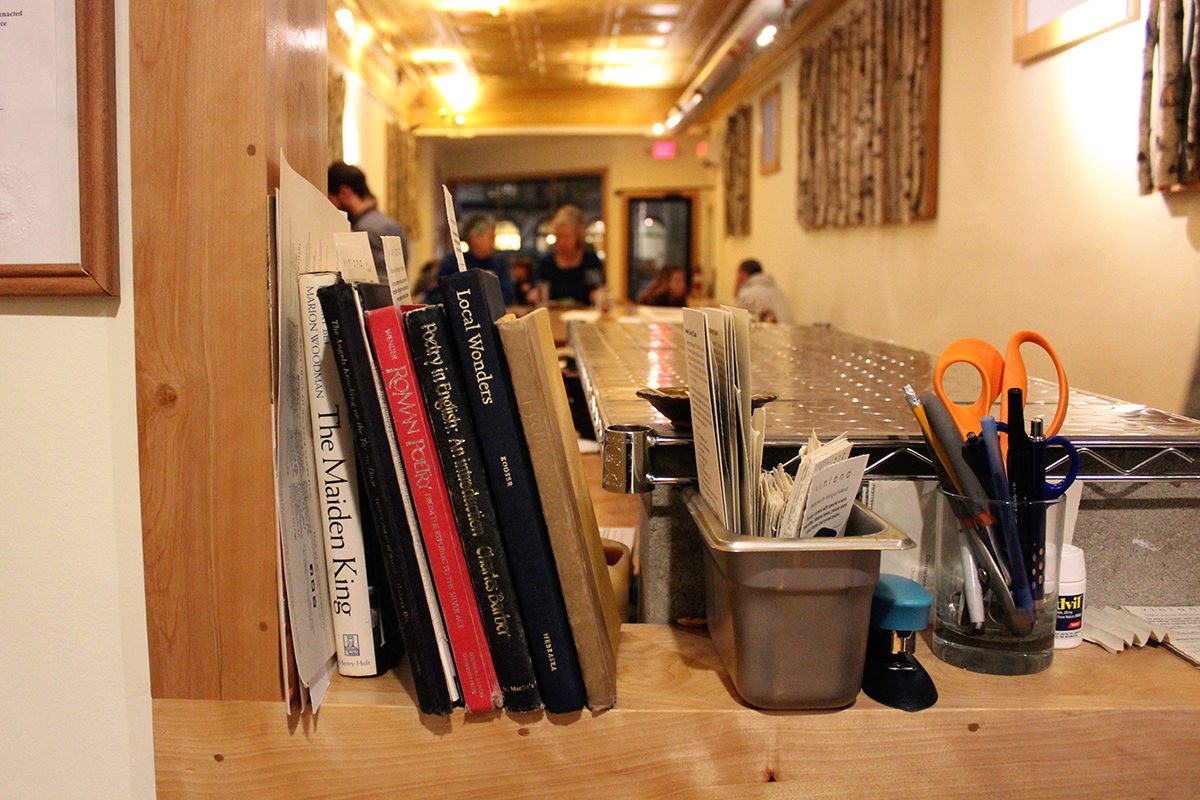 Levi, who has a Master's in Poetry from Bennington College, displays volumes in the restaurant... 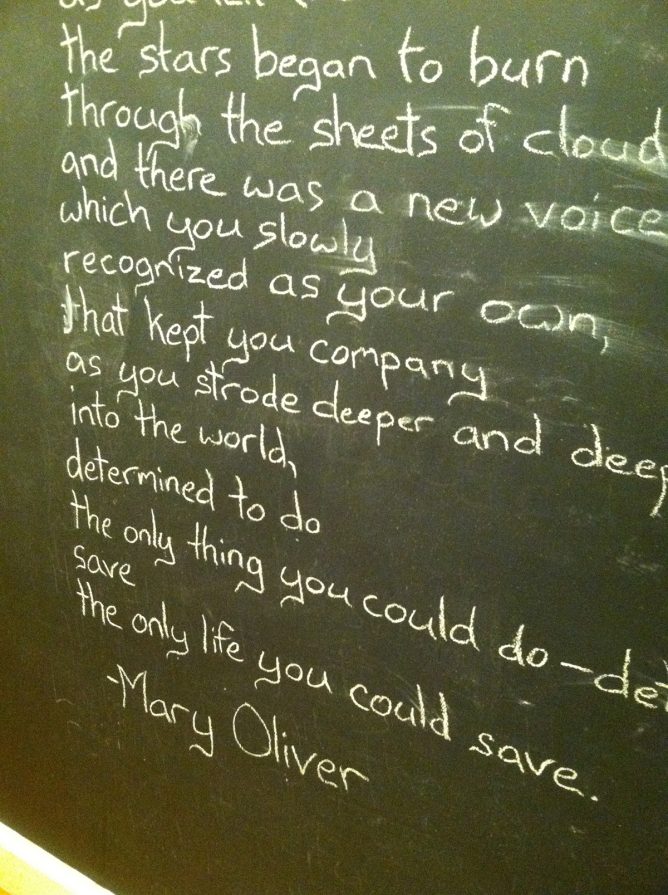 ...and scrawls quotes from his favorite poets on the chalkboard in the bathroom. 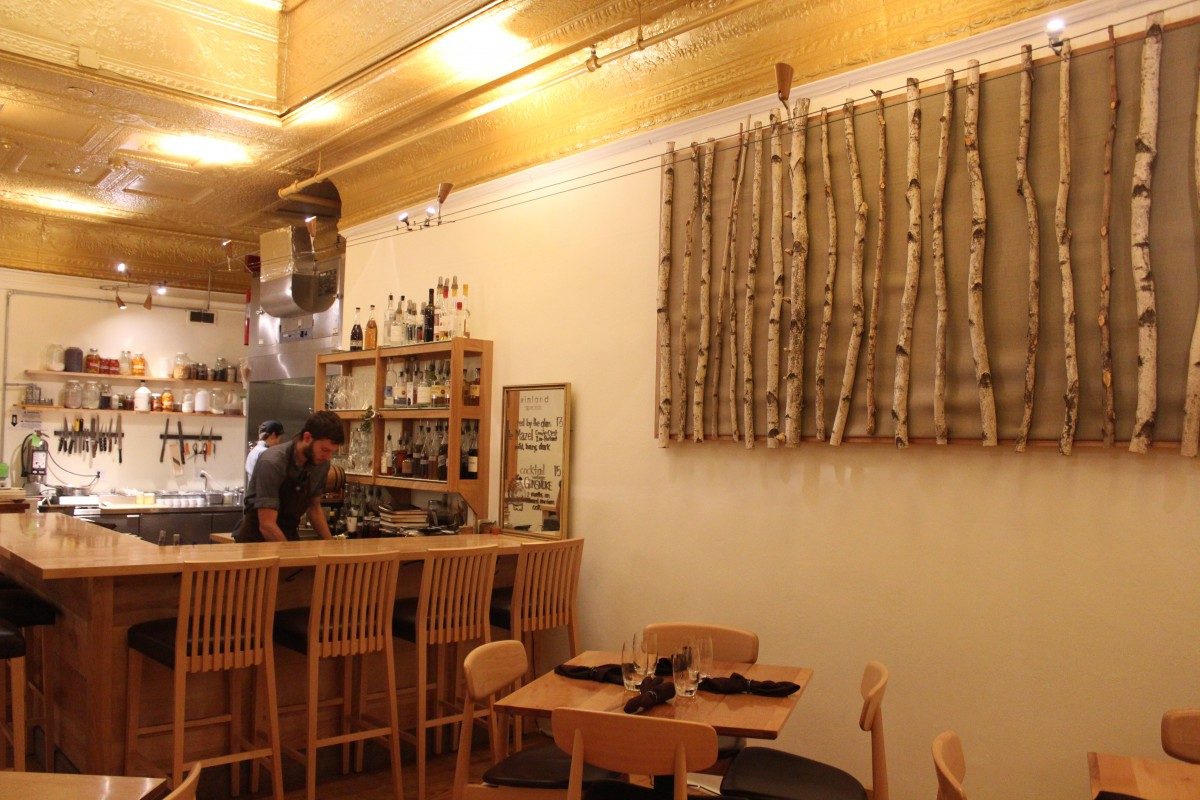 The kitchen at Vinland is open, allowing diners to watch the cooking and plating action.

And here’s the other key thing: The food at Vinland is great. From Levi’s signature turnip soup to the ever-changing lineup of homemade ice creams and offbeat desserts, every dish is presented beautifully, is at least moderately healthy, and, most importantly, is pretty damn tasty. If you’re surprised, you shouldn’t be. After all, Levi isn’t the only chef out there going local—he’s just one of the only ones taking it to this extreme.

“It’s strange that people will say to me, ‘God, how can you not have olive oil? How can you limit yourself like that?’” He continues, “It’s not a knock on olive oil, but you don’t need to have it in your food. We’re trying to create Maine food, and olives don’t grow in Maine.” For Levi and his cooks, the limitations are actually what makes this entire thing rewarding. It’s a matter of politics, a matter of taste, and most importantly, a matter of form.

“If we did 95 percent local and had some black pepper and olive oil, it would be a fairly insignificant difference in terms of our impact,” he says, talking about the economic impact that buying local has on the community. “Going that extra five percent, that’s not as much about economy, but about form. That’s not something people are used to thinking about, but I think it’s an important thing to think about.”

When Levi talks about form, he means the governing principles that shape a piece of art. When discussing his work, he compares it frequently to writers and artists, yet carefully notes each time, “not saying that I’m Milton” or “I’m not trying to say I’m Michelangelo.” He’s aware that his mission (or the mere act of discussing one’s cuisine in the same breath as Milton or Michelangelo) isn’t always going to be well-received, and he’s aware that many people find his approach to food strange, even threatening. When I asked him about his detractors, he was thoughtful for a moment, before talking about certain “snarky” people that pop up in his Facebook feed, among other places. “The Eater crowd is not the Vinland crowd, I will say that,” he adds.

But perhaps there is more overlap than even Levi suspects. According to the servers, diners frequently reveal that, “We drove all the way from New York to eat here” or “We came up from Boston to try this.” Part of the draw is the exotic nature of Levi’s enterprise. But part of it is that word of mouth has been very kind to Vinland. Though Levi and his cooks can’t use any olive oil, black pepper, cane sugar, citrus, or a host of other ingredients that aren’t native to Maine, this team has no trouble coming up with new ideas. In fact, Levi credits their unique form for some of his favorite creations and suggests other chefs give this kind of cooking a shot:

“If we can’t reach for lemon, if we can’t reach for cane sugar or black pepper, than how will we create a dish that is every bit as great with what we do have?” Levi says. “If chefs turn all too quickly to lemon, and don’t think about the virtues of cranberries or lacto-fermented vegetables or yoghurt whey or other forms of acid, then cooking can become narrowed down and homogenized.”

So, yes—Levi is an eclectic guy, and incredibly serious. He takes his business seriously, his food seriously, and his ethics very, very seriously. But such an approach can be refreshing; there is no irony at Vinland, no sly nods or cooler-than-thou attitudes. While the servers are knowledgeable about every aspect of the menu, they don’t force the locavore aspect down your throat. If you want to know where your crispy-skinned chicken spent its final days, go ahead and ask. But if you would rather just enjoy the melding of animal fats and local herbs, the sweetness of winter root vegetables and the crackly texture of rendered skin, no one is going to stop you with a tirade about conscious consumerism. Vinland is, after all, a fine dining restaurant, not a soapbox.