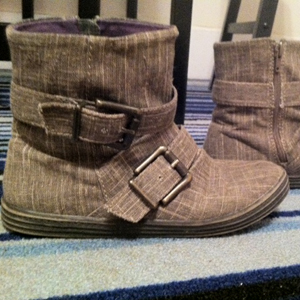 I am a professional Marathon spectator. You can find me on the race sidelines every year—sometimes with an inspirational sign or another piece of flair—cheering just as loud for the friends I’m tracking online as the strangers who have written their names on their arms. To me, the day has always been one of revelry, shenanigans, and inspiration. I love the way the city rallies around these brave, faithful runners.

As I got ready to leave my house the morning of the marathon, I changed my shoes at the last second. I’m not sure why exactly, but I switched from my simple flats to boots. I didn’t think too much about it; I certainly had no idea the significance of this seemingly small change.

That day, I monitored the mobile race updates diligently while a friend sailed through the race. I kept marveling at her speed and endurance. As she ran down Boylston, I left my spot at Forum and went out to the street to scream her name. I texted her right away: “You are amazing!” and went back to the Forum to join my friends.

Ten minutes before the first explosion, we were happy. I remember the silly conversations, recurring inside jokes about pizza and cupcakes, the photobooth pictures, and the new friends around us. A photographer from the Globe stopped by to take our picture—four friends just enjoying one of the great Boston holidays.

And then, it happened. Twelve seconds that changed everything.

I remember the first explosion. The confusion. The way that people were more curious than frightened. We were just starting to speculate what the loud noise could possibly be. Despite a lifelong aversion to loud noises, I don’t remember feeling scared. The runners continued to race by, albeit slower and tentative. Terror did not seem appropriate in light of the beautiful day and festivities around us.

Then the world exploded.

The second bomb detonated less than 10 feet away from where I was standing. A deafening boom followed by silence. In a way, it felt like being underwater. The smoke filled my lungs as I was pelted by debris in all directions. I closed my eyes and remember thinking “This is it.” And it wasn’t so much that I felt my whole life flashing before my eyes, but instead a feeling of finality—that this would be my last thought. Then I opened my eyes; I was still alive, but I was no longer celebrating at Forum. I was in hell.

The next few moments were chaotic. I thought that we were under attack and that the next explosion was inevitable. People were everywhere, running, falling to the ground, screaming. I remember the feeling of wanting—needing—to get out. The staff at Forum herded us toward the exits, and I ran and ran out into the street. As we evacuated, I saw all three of my friends. We were all alive, and we were scared.

I found one friend in the alley, and in our shock and confusion, we devised a plan. We were going to walk home, away from danger. As we hurried down Comm Ave, I started to feel pain. My ankle. My back. My jeans were ripped. There were holes in my shirt. I touched my back and saw blood on my hands. My friend told me to take my shirt off and I complied, despite being on Comm Ave. “There’s metal in there. We’re going to the hospital.”

That day, we made it to Central Square before a friend picked us up and brought us to Somerville Hospital. To where our families waited, not quite knowing how close we were. As we were being treated, I asked the doctor to look at my ankle, as I winced in pain. He found nothing.

The next morning, I awoke with a deep bruise and the imprint of my boot buckle in my ankle. Something hit me. Hard. I realized that my last minute decision to change my shoes that morning potentially saved me from a more serious injury.

When I think about what happened at the marathon, I can’t help but think of the people around me at Forum that day. As horrible the experience was for me, I am so thankful to have only sustained minor injuries. It saddens to me to know that although I was fortunate, there were others that were not as lucky. The small and insignificant decisions we made that day—where to go, where to stand, what to wear—had a profound impact on what happens next and how we recover.

As time goes by, the moon-shaped imprint of my boot buckle has not yet faded, and there is not a day that goes by when I don’t relieve those 12 seconds in my mind and wonder what could have happened had I taken a step closer, or decided to watch from another venue. But the scar also reminds me of the way the city rallied around the injured, offered comfort and support to those in need, and worked together to catch the monsters behind this cruel act.