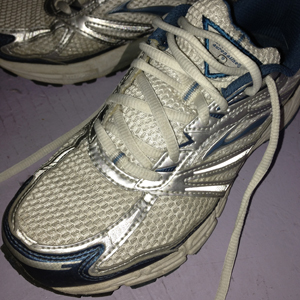 I had not expected so many people to cheer for us. Erin and I were not the kind of runners who normally inspire wonder. We ran the Boston Marathon in 2001 with a goal of finishing in 4 hours, 30 minutes. If anything, people might look at us and think, what determined women. We trained on deserted streets in the early mornings, but on Marathon Monday, the streets were packed with people cheering for us. I hope to never forget what that felt like. Long after the elite runners zipped past, thousands of people stuck around and kept cheering. In 2013, people like this were hit by the bombs.

Erin had a race number but I did not, so we lined up with the bandits, unofficial participants at least one-quarter mile from the starting line: behind the sleek runners in tiny shorts, behind runners fast enough to qualify, behind people like Erin who had raised money for charity. As a group, the bandits looked like they’d just rolled out of a bar. Most were in old T-shirts and shorts, some were in costume, two wore Blues Brothers suits. While we waited to start, a dozen or so men peed into bushes around the edge of some family’s yard.

In a photo of me and Erin that day, I have the same look of amazement that Bill Clinton used to get when he walked into a ballroom jammed with supporters, a look that said he couldn’t believe so many people liked him. On that day I couldn’t either. For 26 miles, people cheered. We passed a band playing 70s rock in a suburban driveway. Children held their hands out for high fives. Adults raised signs or beers or just their clapping hands. As we approached Wellesley College, we could hear the famous swell of female voices. I had heard that the student body lined the course each year but nothing prepared me for the way my chest expanded, my skin tingled, my arms raised over my head of their own accord as we ran through the tunnel of cheering students.

With 10 miles to go, we found my mom and sister. Neither of them likes crowds, but there they were at the base of Heartbreak Hill, mainly because I told them it would mean a lot to me. They called our names, we called back, and then we jogged on. My mother and sister were supposed to go home after that, that was our plan, but something moved them to take the T to Copley Square.

With three miles to go, my boyfriend joined us. His role was to talk Erin and me through the final stretch, but he kept surging ahead. For more than a mile, he’d sprint, realize he’d dropped us, run in place while we caught up, then sprint ahead again. I had barely enough energy to move, but I knew how he felt. By then, the cheering was almost deafening. When the three of us crossed the finish line, I saw my mother and sister packed in among the crowd. I was delighted and nervous and asked if they were OK as soon as we reunited. My mom described seeing a group of runners help their friend across the finish line. My sister said she was ready to start training.

I imagine many of the people killed or wounded on Boylston Street this year were like my family: at the marathon out of love or duty or because they knew their presence mattered to someone at the end of a long run. They were people who stood at the finish line long after the frontrunners sprinted across, who cheered for people like Erin and me as if we were rock stars. I remember feeling on top of the world that day, like I could do anything, all because of the people who stuck around and cheered.