#1 Who They Are: Stephen and Donna Dreier

What They’re Doing Now: Stephen is the chief administrative officer for Bright Horizons; Donna is a retired office manager. Where

They Came From: A four-bedroom Colonial in Sharon, where they’d lived for 32 years.

Their Style: “I thought we were eclectic,” says Donna, “but the photographer and stylist said I was classic.”

Their Designer: Karen J. O’Brien of KOB Interior Design in Melrose, who reworked many of their Sharon pieces for condominium living. She also chose all of the colors and fixtures. 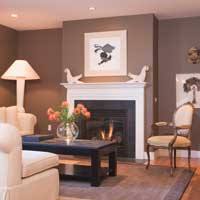 What They Love Most: “My favorite piece is our dining room table, which we re-stained and topped with glass for a more up-to-date look,” says Donna.

Classic Lines: Top, Donna in the kitchen with glass mosaic backsplash; below, clockwise from upper left, the coffee-colored living room with cream accents; a photograph of Stephen’s parents; a delicate handblown vase; the Dreiers demonstrate relaxed formality in their dining room among pieces brought from their Sharon home.

#2 Who They Are: Barbara and Erwin Brilliant

What They’re Doing Now: Erwin retired from his dental practice last May; Barbara is a journalist, television host, producer, and musician, to name just a few.

Where They Came From: A Newton split-level for more than 40 years.

Their Style: “My daughter Michelle, who lives in Manhattan, called it ‘metro glam,’” says Barbara. 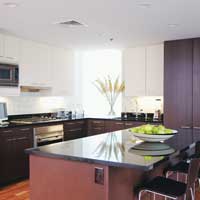 Their Designer: “I did the condo as a collaborative effort with Bill Trifone of Bill Trifone Interiors in the South End. He knew what metro glam was, so I hired him right away,” she says.

What They Love Most: A recently purchased black baby grand Steinway (there are three others on their floor alone). Barbara says, “I’ve flipped and made a profit on plenty of pianos in my day!”

#3 Who She Is: Barbara Baratz

Where She Came From: Originally a large house in Marblehead; most recently, a 1,500-square-foot apartment in Brookline.

Her Style: “Eclectic. My taste changes, and I keep what I like.” 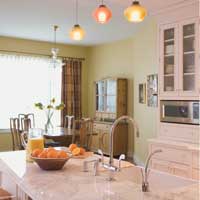 Her Designer: “Myself! I was trained in interior design but I’m more of a space planner. Of course I used Kitchen Views for my kitchen.”

What She Loves Most: “I adore my antique Danish pieces like the china cabinet. It’s filled with Chilean pottery, which I buy whenever I go to visit my adopted family in South America.” She loves being close to the reservoir, but chose a unit on the courtyard side. “I had water views in Marblehead, so I opted for my own patio instead.”

Mix And Match: Clockwise from top, Barbara in her self-designed kitchen with Omega cabinetry; a selection of hand-painted South American pottery; antique furniture made of European pine; the kitchen island, topped with Calcutta Gold marble.