When it comes to getting hitched, more Americans than ever before are saying "I don't." Singles now make up nearly half the adult population in this country, and new research suggests they're happier, more social, and more active in the community than many of their wedded counterparts. Now if only their friends and family (oh, and while we're at it, coworkers, benefits providers, and the federal government) would get off their back. 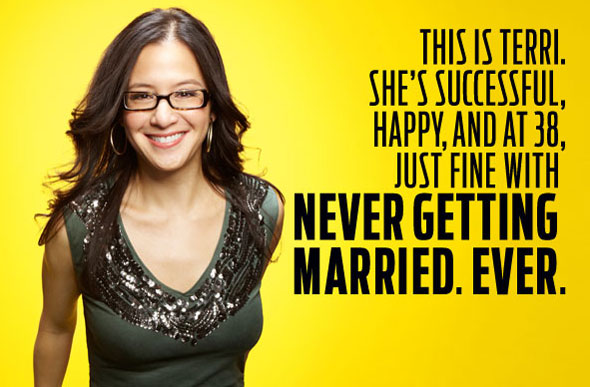 If you’ve been single long enough, then you probably have one: a story of such jaw-dropping cluelessness that you shake your head as you retell it. Eva’s happened during Christmas, at her job at a financial office in downtown Boston. The perpetrator: her boss. After he handed out a bottle of wine to every other employee in her department, Eva unwrapped a small bar of soap with a cat sticker on it, and an accompanying mug that said “Everything Tastes Better with Cat Hair in It.”

“I was speechless,” she says now, breaking into a laugh. “The crazy cat lady is really not what you want to be perceived as.” Eva’s sitting in her home in Roslindale, a tidy four-bedroom from the late 1880s that she’s renovated and decorated with retro-chic ’50s-style prints. Her Chihuahua, Alex, slumps lazily in her lap while Shelby, the white Persian cat in question, saunters by her feet. It’s late afternoon, and the golden light refracting through the bay window of her living room gives the house next door a Hopperesque glow. Across the way, you can see her neighbors’ domesticity playing out through their window like the opening sequence of a sitcom: children running across the kitchen with their backpacks, a mother preparing dinner at the stove. But at 51, Eva says she wants no part in any of that. She’s never been married, has never craved children, and has no interest in settling down with anyone in the foreseeable future. The one thing she would like is for everyone else to just accept that she’s happy that way.

Most people don’t need a mug to remind them that they’re single. Amy, 38, says that between the tabloids and television, she can’t escape it. She sometimes wishes she’d gotten hitched—even if it were just for 72 days like Kim Kardashian—if only to get people off her back. “People want you to have reached these major life goals that they’ve reached, and they want you to be like them,” she says. “But I don’t need a man in my life to make me happy.” Steve, who’s 43 and hails from Lexington but now works in L.A., says remaining single has put distance between him and his married friends. When he returns home, he finds them so focused on their kids they can’t have a conversation. All right, he tells himself, I’ll give them a call in 10 years. Tara, who’s 38 and doesn’t want to get married, ended up in an argument with her brother-in-law over Thanksgiving about whether having kids meant your life was automatically busier than a single person’s could ever be. “Your whole life is you!” he shouted. That was the end of the conversation.

In the past decade, increased public support for gay marriage and a growing acceptance of domestic partnerships has helped to redefine what it means to be a couple—and a family—in this country. But what do we make of a person who remains single by choice? Our politically correct culture keeps us from voicing our judgments about people based on skin color, ethnicity, gender, or orientation. Yet we’re quite comfortable telling people that they’ll be better off when they’ve found someone to share their life with. That’s in part because we’re constantly being told that happiness and success come through our partnerships. But what happens to that logic when more of us than ever before are going it alone?

The 2010 U.S. Census found that nearly half of all American adults—100 million—are now single, the highest rate in recent history, and 61 percent of them have never married. Here in Boston, 59 percent of men and 55 percent of women have never walked down the aisle, which has us out-singling New York, Chicago, and Los Angeles. And while those stats reflect both our sizable student population and our professional aspirations—our median marrying age, hovering around 30, is among the highest in the nation—it’s also a reflection of national trends. In 1960, 15 percent of American adults had never been married. By 2010, that had nearly doubled to 28 percent. The census also found that for the first time since it started counting, married couples now make up less than half of American households. In all, 31 million Americans live alone. And in Massachusetts, 41 percent of singles rent apartments by themselves, while a quarter put down welcome mats in front of homes they own.

Does this sound bleak? A rising tide of bitter singles who have cast love aside, dejected by their lack of prospects? Actually, recent findings indicate the opposite: A 2006 survey of singles by the Pew Internet & American Life Project found that 55 percent of the never-married had zero interest in seeking a romantic partner. It turns out that many singles enjoy their independence. They’re leading full lives. And they’re far less lonely and isolated than some may believe. Traditionally, we’ve thought of being single as a stop on the way toward the happy ending. But new research suggests it’s time to rethink what it really means.

What does being single mean? On Facebook, you have seven different coupling scenarios: in a relationship, in an open relationship, in a civil union or domestic partnership, engaged, married, or the delightfully nonspecific “It’s complicated.” The formerly married can choose from among widowed, separated, or divorced. But the simple “single” encapsulates everyone from the 19-year-old college student hooking up on the weekends to the 85-year-old adult who’s determined that marriage and partnership just aren’t for her. How do we define the idea of being happily—and perpetually—single? What do we call that?

For Bella DePaulo, a professor of psychology at the University of California at Santa Barbara, the term is “single at heart.” She uses it to define herself, and she knows she’s not the only person who feels this way. “It’s a concept that I’m just starting to get out there,” she says. “Single is who I really am, it really suits me. I’m not against coupling. I’m single because it’s the kind of life that’s most meaningful and productive for me.” DePaulo is the author of Singled Out, and has pretty much become the arbiter of the unmarried agenda. She blogs regularly about the social issues facing single people at Psychology Today, taking on topics like stereotypes and stigmatization and highlighting glaring instances of public policy discrimination against the unmarried.

DePaulo says she began to think about the way society treats single people while working on her Ph.D. at Harvard, where, she recalls, her classmates would partner off on weekends, excluding her. Eventually, she coined the phrase “singlism” to characterize the social stigmas that unmarried people face, and edited a book of the same name that was released last May. For years now, she’s been working to shift the knee-jerk reaction society has to singles: that they’re promiscuous and immature, or lonely social introverts. And at long last, her efforts seem to be paying off. More and more of us are revisiting long-held assumptions about what it means to live alone. In fact, researchers are increasingly turning up evidence that marriage isn’t necessarily the better and healthier alternative to being single that it’s often assumed to be.

It’s a brisk November morning at Doyle’s in Jamaica Plain, and the weekly Sunday gathering of knitters have arranged themselves in a cozy, well-lit nook of the pub, needles thrashing silently in their hands. Alice Stern’s head of close-cropped silver hair is bowed, and she squints through her frameless rectangular glasses as she works on a beautiful cashmere cable-knit scarf she’s making for a friend she’ll see at Thanksgiving. The 10 or so women here—some single, some divorced, some married or remarried—busily discuss a knitting party they’re throwing on Black Friday. “Perfect,” Stern says, looking up. “I’ll be able to bring my new spinning wheel.”