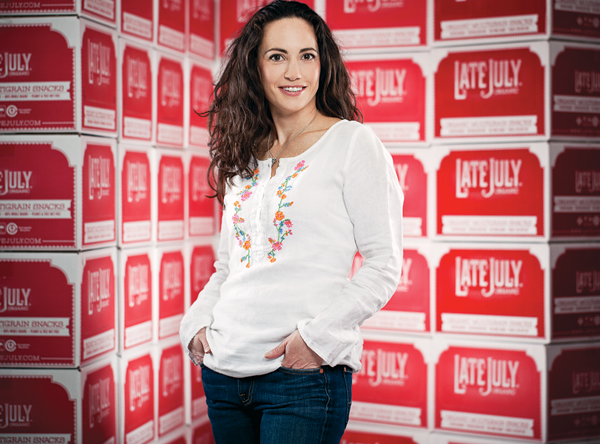 I’ve been interviewing Nicole Bernard Dawes in her office all day, and I’ve just realized there’s not going to be a lunch break.

Fortunately, she owns a chip company. And while it’s not my usual policy to take anything from the people I’m writing about (crunch crunch), let’s just say that the half pound of sweet-potato tortilla chips I’m scarfing down are all in the name of research.

It’s January, and Dawes’s face is plastered on the chip aisle of every Whole Foods in the country, part of a promotional campaign the retailer has initiated as a way of introducing customers to her company, Late July Organic Snacks. Shoppers strolling down the salty-snack aisle at this moment can find Late July’s tortilla chips next to a two-foot sign featuring Dawes, with her dazzling smile, brown hair, and sun-kissed cheeks, dressed in a bright red tunic and sitting on a beach in Barnstable Harbor. “I am over-the-moon passionate about making organic snacks,” she says on the advertisement.

And if these shoppers aren’t getting distracted by toddlers pulling Beanitos or kale chips off the shelves, they can aim their smartphones at a little quick-response grid on the poster and join Dawes on a two-minute video tour of her day, including a rundown of the whole ethos of Late July Organic Snacks. The message is loud and clear: A bag of chips or a box of cookies will make Late July customers feel like they, too, are on a Barnstable beach, enjoying a perfect moment with their families, watching their sons as their dogs romp happily about. Late July tortilla chips, in other words, aren’t just a snack. They’re an ideal.

Okay, they’re just chips and cookies — what your mama calls junk food — but they’re USDA-certified-organic junk food, and that makes all the difference in the world. Nicole Bernard Dawes’s goal is to encourage healthy eating, and if that has to start with the gateway drug of junk food, then that’s just the way it has to be.

“My little part in this whole thing is to try to educate people about organic through their taste buds,” Dawes tells me as I scarf down another chip. The way she sees it, our current agricultural practices are totally out of whack. Though Silent Spring, the book often credited with starting the environmental movement, was published exactly 50 years ago, little has changed since then. We’re still using chemical pesticides for most of our farming, still putting up with E. coli outbreaks in the food supply, still serving antibiotics to our pigs and chickens and cows. Dawes wants to change all that. Call it saving the world, one tortilla chip at a time. The problem is, there are a lot of other tortilla-chip companies out there, many of them better funded. Fortunately, Dawes has some experience in the chip business.

Her father was Stephen Bernard, the founder of Cape Cod Potato Chips and another entrepreneur who set out to change the way we eat. Bernard’s great revelation was that you could make a better potato chip by following a relatively expensive formula of potatoes, cottonseed oil, and salt instead of Big Food’s cheaper recipe of hydrogenated oils and glutamate flavor enhancers. Bernard was a progenitor of the idea that the fewer ingredients required to make a food — even a junk food — the higher its quality.