The Best Theme Parks for Family Fun near Boston 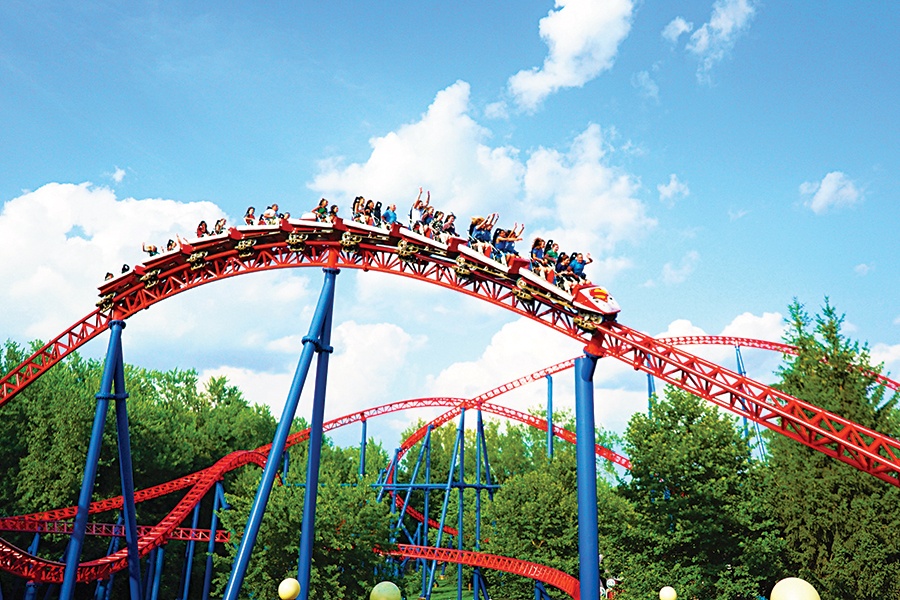 Top attractions: When Superman the Ride sends your train over a stomach-churning, 221-foot drop at 77 miles per hour, it certainly feels faster than a speeding bullet.

Snack time: Fried-dough stands abound, but Johnny Rockets is one of the few sit-down restaurants where parents can rest their legs (and perhaps gather liquid courage) while kids suck down shakes and burgers.

Best for: Parents and kids who don’t want to let rain get in the way of their fun—Great Wolf Lodge’s water park is completely indoors, so you can slip and slide no matter the weather. There’s also a forest-themed resort attached for overnight adventures.

Best for: Outdoorsy climbers who want to soar through the trees and push themselves to the next level—literally—at an 11-acre aerial adventure park.

Top attractions: Adrenaline junkies won’t want to miss ziplining across a 150-foot ravine or hiking the 200-foot suspension bridge hanging above it. If your crew’s littlest adventurer is still working themselves up to treetop hopping, there’s the kid-friendly Basecamp trail for testing out skills much closer to the ground.

Snack time: After climbing, rest your feet and fill your belly at Bob’s Country Kitchen in Lanesborough, the perfect place to refuel with home-cooked all-day breakfast spreads. 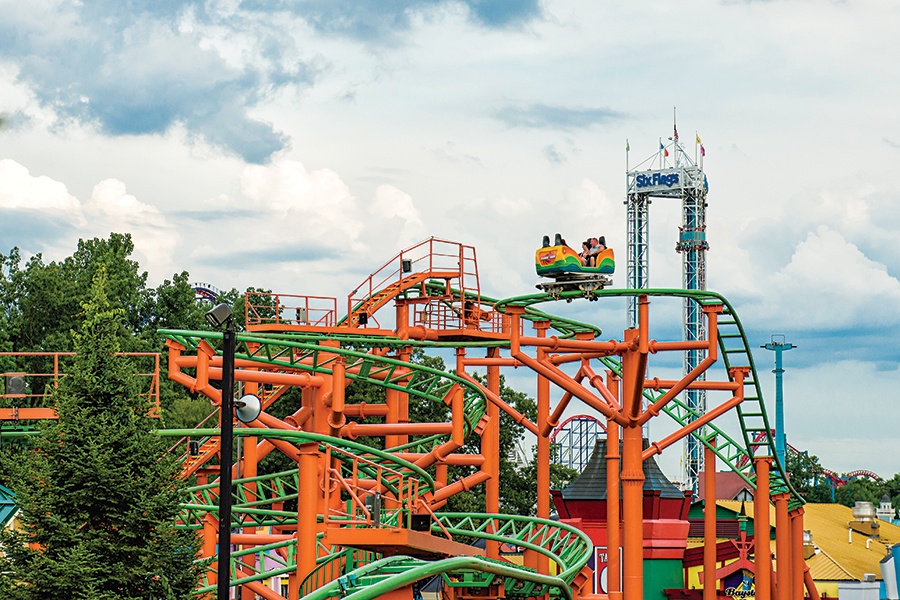 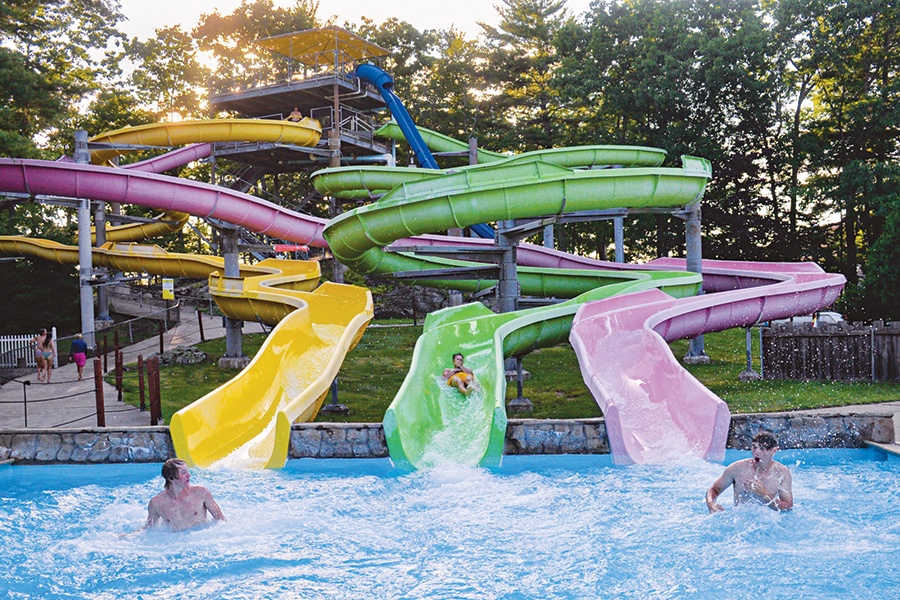 Best for: Fearless adventurers who want to twist and turn on the slides and rides of New England’s largest water park.

Top attractions: Calling all daredevils—Dr. Von Dark’s Tunnel of Terror will drop you into a head-dizzying and stomach-twisting 40-foot plunge. You’ll also have a whale of a time in the 700,000-gallon wave pool, the biggest of its kind in the region. 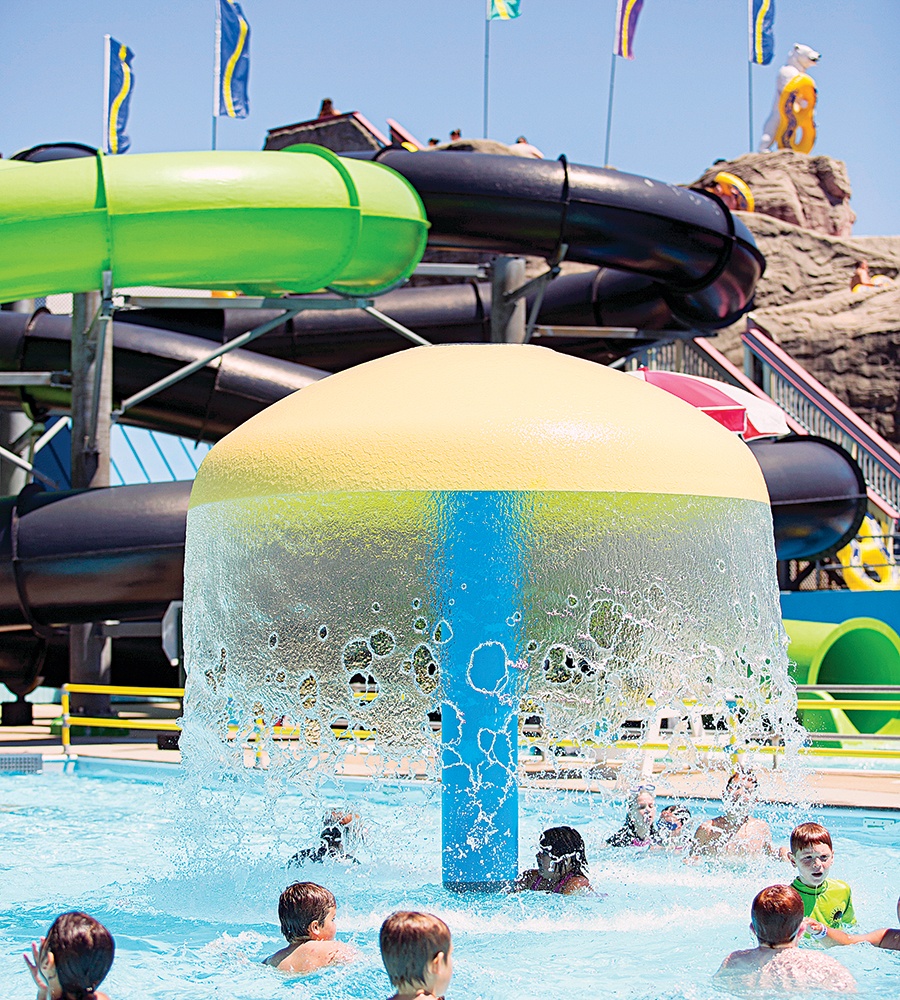 Best for: Groups of fun-seekers looking to please both the fairground fans and the water-park lovers in their crew.

Top attractions: Liquid Lightning offers an electrifying, rapid descent down a slithering slide, while the indoor Astrosphere—a Scrambler-like ride surrounded by a psychedelic light show—is an out-of-this-world experience that won’t take you too far off terra firma.

Snack time: After the kids satisfy their sweet tooth at Saco Ice Cream, hit the Upper Deck Beer Garden for a grownup treat. 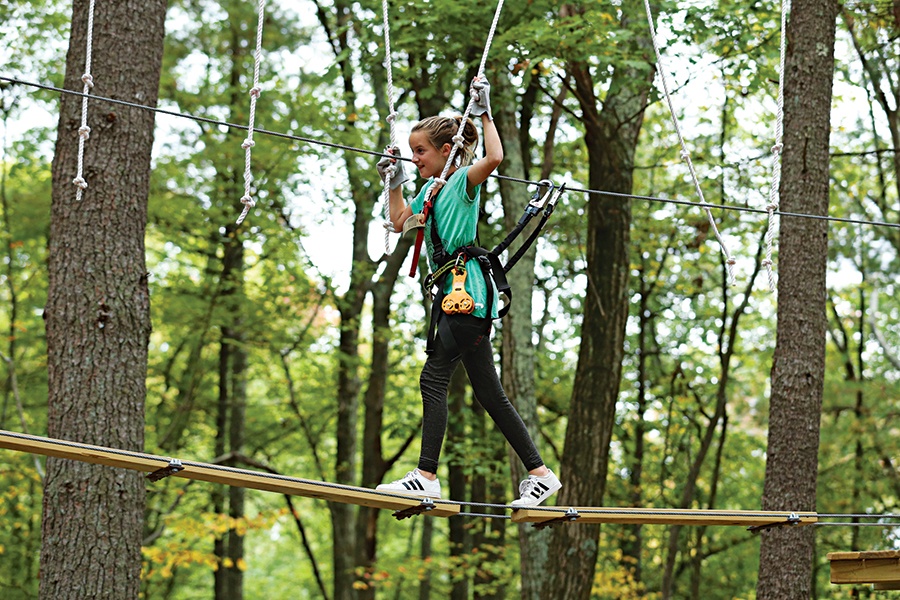 Best for: City dwellers and suburbanites who want to stretch their gas dollars with forested ziplining and climbing not far from home.

Top attractions: The park really comes alive when the sun goes down and the twinkling lights come on, making for a magical, music-filled, and glow-stick-equipped ascent to the canopy.

Snack time: Even if you don’t spot a four-leaf clover to pluck, you’ll be lucky to find excellent pub fare at the on-site Irish Cultural Centre, which offers whiskey steak tips and patio seating on the other side of a green (of course!) footbridge. 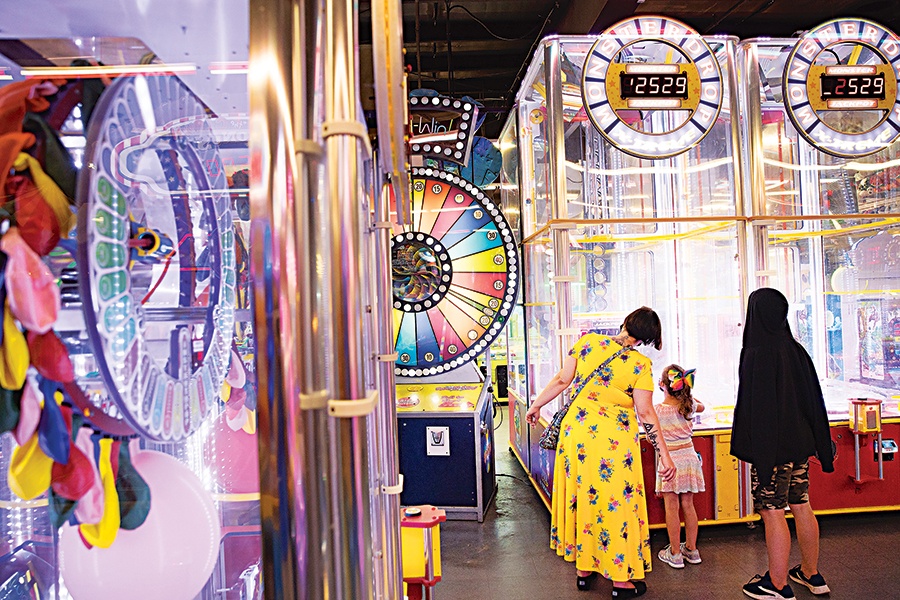 Best for: Beachgoers who want a night of amusement-park escapades after a relaxing day on the hot sand.

Top attractions: Only real thrill chasers should try the Power Surge, which is exactly what it sounds like—heart-dropping, head-spinning, and fear-instilling.

Snack time: Continue a night along the seashore over at the Pier Patio Pub, a rustic restaurant dishing out New England seafood from its perch jutting over the ocean. 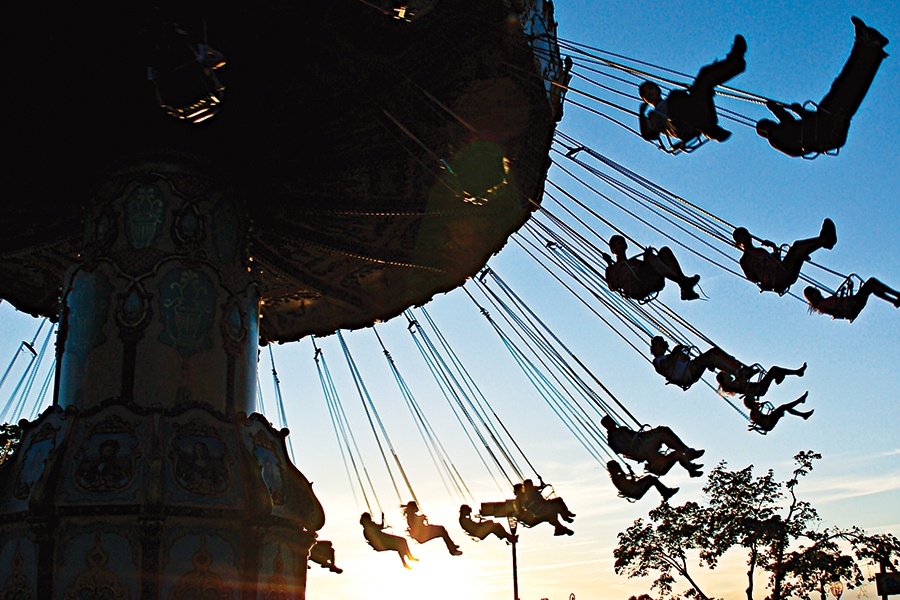 Best for: Old-school amusement park fans looking for a classic-coasters-and-carnival-rides kind of day.

Snack time: The park’s snack options are as wide-ranging as the rides, from the hand-cut fries from the International Food Festival to the margaritas at Monkey Bar.

Top attractions: Lake Compounce keeps its rides current, recently adding an all-new sound and light experience to the iconic Storm Surge waterslide, which snakes its way around the exterior of a 60-foot-tall lighthouse.

Snack time: Cool off with a refreshing cup of Rita’s Italian Ice while waiting in line, then reward yourself for a day well spent with a mixed drink at the Beachfront Bar.

*Admission prices reflect the cost of one full-day, adult ticket. 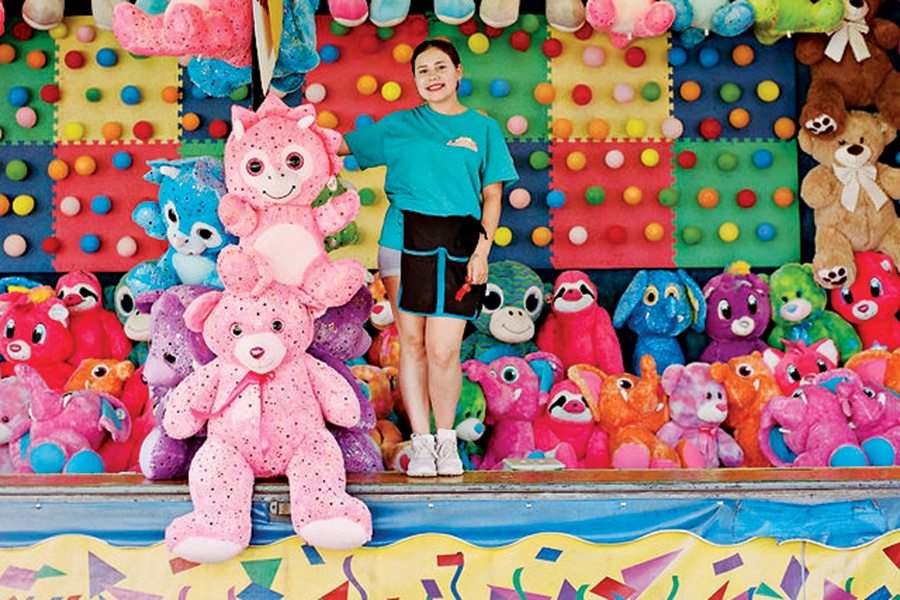 Can’t get enough carnival-style fun? Add these summer festivals to your calendar.

IF YOU LIKE: Watching really trippy fireworks while snacking on midway munchies…

BLAZE A TRAIL TO: The Greenmind Fair & Share, a carnival for cannabis enthusiasts set to spark up the sky over Greenfield (where else?). Besides the dazzling pyrotechnics and indie vendors selling pot-related paraphernalia, the picturesque valley town’s Franklin County Fairgrounds will be filled with rides, food trucks, live music, and get-buzzed-for-this diversions like a foam party and silent disco.

IF YOU LIKE: Drooling over hot rods and racing your way to a finish line…

HIT THE ROAD TO: Southern New Hampshire’s Hillsboro Summerfest, a multiday caravan of family-friendly events that includes a car and truck show at the fairgrounds, a float-filled parade through the streets of town, and a 5K road race along the pine-lined Contoocook River. More into upper-body workouts? In between Tilt-a-Whirl and Zero Gravity rides, take part in an old-fashioned (read: women-only) competitive skillet toss.

IF YOU LIKE: Taking in a live show from the most spectacular seat in town…

USHER YOURSELF TO: The Barnstable County Fair in East Falmouth, where the nosebleed section (a.k.a. the Ferris wheel) is actually the best place to take in a week’s worth of main-stage performances. Music acts include country-music chart-toppers Parmalee and an ABBA tribute band, but the BMX bike “thrill show” and the high-flying aerialists of Circus Incredible promise to be equally as enthralling.

IF YOU LIKE: Donning seersucker and playing croquet at a Jazz Age–themed fete…

DANCE THE CHARLESTON ON YOUR WAY TO: The Roaring Twenties Lawn Party on the greater-than-Gatsby’s grounds of the Crane Estate in Ipswich. Don’t know the moves? On-site instructors will help you hoof it like a pro, or at least like the other lovers of all things vintage who swarm this outdoor bash for its era-appropriate performers, flapper-friendly fashion stroll, open-air games, and picnicking with spreads from local vendors.

IF YOU LIKE: Talking to barnyard animals and flexing your green thumb in the garden…

MOSEY ON OVER TO: The annual Martha’s Vineyard Agricultural Society Livestock Show & Fair, where you can play horse (or goat, or pig, or…) whisperer to a whole herd of blue-ribbon-winning creatures. Maybe you’ll score your own award, if you have an impressively big pumpkin or other garden-grown delight to enter in one of the produce pageants—or at least earn points for bravery on a dizzying Zipper ride.

IF YOU LIKE: Seeing jugglers, jousters, and fire eaters while imagining yourself
in a bygone era…