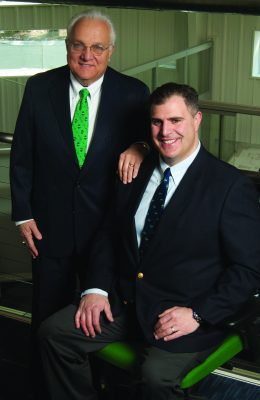 E.M. Duggan is a family business specializing in plumbing, HVAC, and fire protection. Vincent F. Petroni is the company CEO, president, and CFO, and Len Monfredo is the executive vice president of operations.

Who started this family business?
E.M. Duggan was founded in 1891 by Edward Duggan as a small plumbing and repair service. Representing the second generation, his son, William took over in 1942. Four years later, Edward Duggan II led the company into the early 1990’s, and then his son-in-law, Vincent Petroni and his wife Maureen, representing the fourth generation, took over. They are now in the process of transitioning E.M. Duggan over to the fifth generation to Vin’s son-in-law Leonard Monfredo and his wife Karin.

Why is the location of your business so important to the success of your business?
We are centrally located in an industrial park in Canton. During the recession we bought the buildings to the left and right of us and now have over 125,000 square feet of prefabrication warehouse and office space. We also have an office located at 179 Lincoln Street in Boston.

Have you ever encountered any challenges in your family business?
Being in business since 1891, we have seen more than a few ups and downs. Throughout the years we have used some of these setbacks to position ourselves for future growth. During the 2007 to 2009 recession, when other companies were laying off, we were continuing to grow E.M. Duggan. We were able to hire top talent like Rick Dorci and Kevin Walsh, replacing part of the past leadership team, who were retiring after 25 to 45 years at E.M. Duggan. We also created two state of the art prefabrication facilities and offices that paid off when the recession ended.

What’s the best advice that someone in your family offered you?
Never be afraid to pay taxes because it means you’re making money, and you never know where talent can come from—it can be anyone you meet.

Since you work together, where and when do you like to relax as a family?
On the weekends we go to Cape Cod, where we both have houses three doors down from each other. It’s great to see my grandchildren and my daughter, and we try not to talk about work.

We encourage our employees to have a good work-life balance. We give people a lot of leeway, but we have monthly quarterly reviews so we can see results. This allows people to do the things they need to do, like take their kids to a soccer game. We don’t care how you get your job done as long as you get it done.

Our people are the reason for our success. They all believe strongly in the company and the culture and they all feel like they’re part of a team. Our success is that we’ve treated our people well over the five generations and they have always given back to us.

Back to Main Page