Another Big Moment for Ed Davis 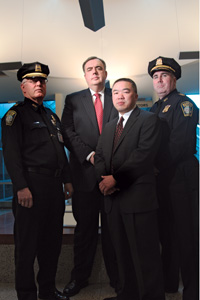 The death of David Woodman, a 22-year-old who was arrested during the Celtics victory celebration and died more than a week after police restrained him, is not the first time Boston Police Commissioner Ed Davis has had to deal with highly-charged allegations against his officers.

Early in his tenure, he had to contend with charges against a cabal of crooked cops that worked with undercover FBI agents to help protect a shipment of drugs headed for Boston, and Davis’ efforts to clean up the force were lauded in many quarters.

Woodman’s death will be another test of his leadership. The young man’s friends have told the media that officers were unnecessarily rough when they arrested him, and his parents are calling for a federal investigation.

Davis has resisted those efforts and is instead calling for an internal review, along with the Suffolk DA’s investigation.

The account given by Woodman’s friends and Boston Police are very contradictory.

According to one of the friends, as Woodman passed the officers, he said, “Wow, it seems like there’s a lot of crime on this corner.”

Officers grabbed Woodman, who was carrying a plastic cup of beer, and as they struggled to handcuff him pushed him face down onto the ground, according to Woodman’s friend.

One of the friends said he returned a few minutes later but was ordered to leave or face arrest. “They were all just around him and he was on the ground and not moving,” the friend said. “I didn’t see them giving him CPR.”

For their part, officers say they started CPR when they realized Woodman was in trouble.

[I]t appears, from the evidence we have reviewed thus far, that officers did not use excessive force. That is based upon interviews conducted with officers and witnesses.

As Yvonne Abraham pointed out in the Globe today, the autopsy hasn’t been completed yet, so how can Davis say this with confidence? The Woodman family’s attorney is hinting the officers who arrested David may have had time to get their stories straight before reporting what happened during the arrest. All nine officers who were present during the arrest went immediately to the hospital for stress-related reasons, leaving a superior who was not at the scene during the incident to file a report.

This is the third time someone has been killed in the aftermath of a big Boston sports team win, and the second that was related to police activity. (Note to the Globe’s editors: Victoria Snelgrove died during the 2004 ALCS celebration, not the World Series festivities.) There’s a lot of pressure on Davis, who has received generally high marks during his time as commissioner, but there’s bound to be more after the autopsy results are released and the investigation continues.