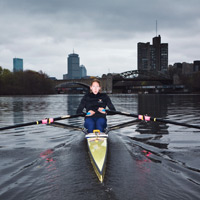 It took us a little while to calm down after Michael Phelps won his record-breaking eighth gold medal (U-S-A! U-S-A!), but we’d like to update you on Cambridge rower Michelle Guerette and her quest to beat Ekaterina Karsten-Khodotovich of Belarus and become the first American woman to ever win Olympic gold in the single scull.

The Cantabrigian is happy with her performance.

“I knew that when I was with everyone at the 1,000, that was good. I knew that it would be hard for everyone to hold that pace. I held on, held steady in the third 500, and then just took it up a little. I figured I had about 30 hard strokes; it was really about 45. At the end, I was just (saying) ‘Keep it together. Don’t let up.’ It was better than my best race.”

It’s also better than the best finish by an American woman in 20 years. In a press release, the Head of the Charles Regatta points out that no American woman has medaled in the single sculls event since the Seoul Olympics in 1988.