Obama Is Coming to Boston This Weekend

He's accepting the 2017 Profile in Courage award at the JFK Library on Sunday. 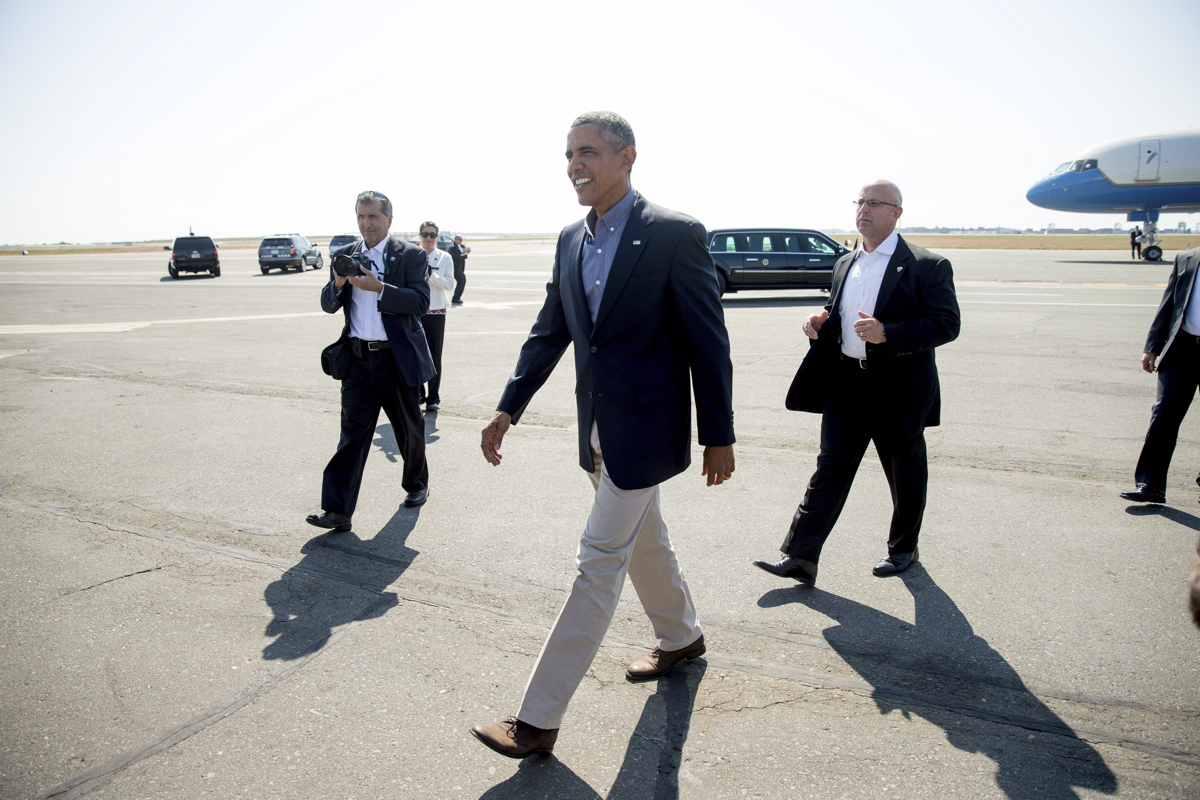 President Barack Obama walks across the tarmac to greet visitors as he arrives at Boston Logan International Airport in Boson, Monday, Sept. 7, 2015. Photo via AP

Update: Here is Obama’s full speech, which starts at about the 38 minute mark:

President Barack Obama is headed to Boston this weekend, where he will accept the 2017 Profile in Courage award at the JFK Library.

Kennedy’s daughter Caroline, the former ambassador to Japan, and her 24-year-old son Jack Schlossberg, will each speak at the ceremony and present the award.

“President Kennedy called on a new generation of Americans to give their talents to the service of the country,” Caroline Kennedy said in a statement when Obama’s selection for the award was announced in March. “With exceptional dignity and courage, President Obama has carried that torch into our own time, providing young people of all backgrounds with an example they can emulate in their own lives.”

Schlossberg, who made his first TV appearance on The Today Show this morning, said he was “inspired” by Obama’s presidency.

“In 2008, I was inspired by President Obama’s vision for America and all the promises that he laid out for our country,” Schlossberg, who was among those who selected the president to be this year’s honoree, said, according to People. “This award really recognizes that he made tough choices over the last 8 years to execute on that vision—to give people health care, to get serious about climate change, and to reach out to international partners and really improve America’s standing in the world. And that takes political courage.”

“I think we’re seeing today it’s pretty easy to criticize without offering solutions,” he also said, “and President Obama did not do that. He really had the courage to govern responsibly.”

For the first time this year the event will be held in a tent outside the library, rather than inside. It fits 700 people. An official guest list for the black tie gala that accompanies the ceremony has not been announced, but the event is typically attended by a mix of Kennedy family members, local and national politicians, donors to the foundation and other notables. The gala will be chaired by GE CEO Jeff Immelt. They are slated to start arriving around 5 p.m.

The event can be viewed on a live stream available here. It begins at 8:30 p.m., kicking off with a performance from James Taylor.

The award has special significance this year, as it’s the 100th anniversary of the late President Kennedy’s birth. To mark the centennial, the library organized a year’s worth of programming. For the month of May (his birthday is the 29th) the schedule is packed. On the 26th, there are plans to unveil a new exhibit in memory of his life, called JFK 100: Milestones & Mementos. Highlights of it , according to the library, include “family items from his childhood and adolescence; a flag from PT 109 (the boat commanded by JFK during World War II); items relating to the Cuban Missile Crisis, and notes jotted down by the President in preparation of his landmark address to the nation on civil rights.”

About 20 minutes is budgeted for Obama’s speech. It’s not yet clear what he will use that time to say. Given the tumultuous first 100 days of the Trump presidency, and a victory among Republicans who pushed through the House a repeal of the healthcare law that was a signature accomplishment of Obama’s, many will be listening. But those close to Obama have suggested he won’t take the opportunity to needle Trump or make the case for Democrats. “It is not in anyone’s interest for President Obama to become the face of the resistance,” Eric Schultz, an Obama advisor, tells Politico. “When the former president speaks, he consumes a lot of the oxygen — and can suppress the next generation of leaders from rising.”

Awardees since the award’s inception in 1989 have been given a handcrafted sterling silver lantern made by Tiffany & Co. The award was designed by Edwin Schlossberg, a designer and JFK’s son-in-law, and is based on a lantern found on the USS Constitution. The latest one arrived in Boston this week.

It’s almost time for #ProfileInCourageAward! The lantern has arrived! Sign a thank you for President @BarackObama. https://t.co/nU1mtbkCgu pic.twitter.com/yxfLSghhII

Send a personalized letter congratulating Obama by filling out this online form.

Want to take a trip down memory lane? Here’s a list of 11 times Obama was Boston’s president.