To fix the state’s budgetary, housing, and transportation woes, it’s high time we auctioned off the golden dome on Beacon Hill and moved the capital to Springfield. 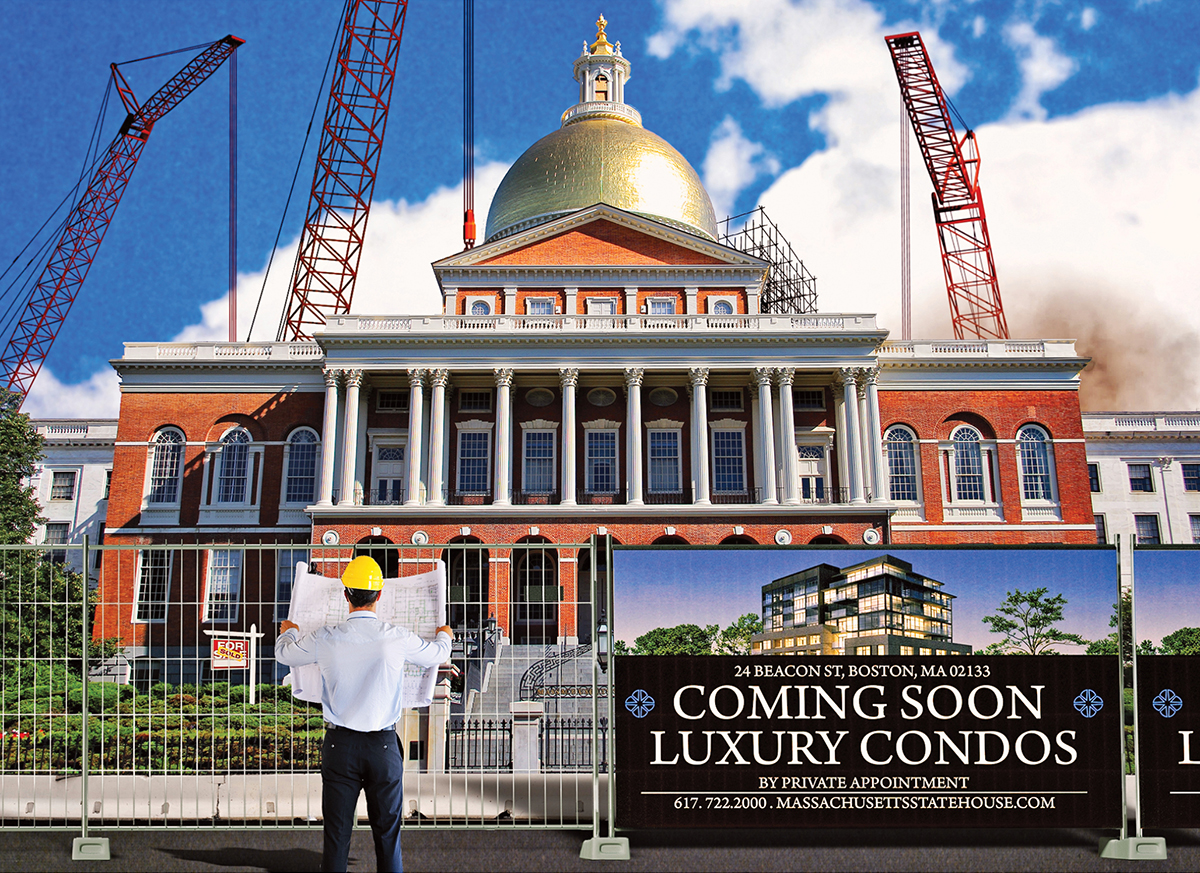 Look  west, my fellow Bostonians, and you will see a vast emptiness. The technology, pharmaceutical, finance, and higher education boons that have lifted our city to prosperity have not been as generous to the rest of the state, and nowhere is this more evident than Springfield. The once-proud birthplace of basketball is now New England’s version of Detroit, with an unemployment rate almost twice as high as Boston’s, ailing infrastructure, and streets dotted with shuttered factories.

It is not my intention to use Springfield as a punching bag. Far from it. As a former Boston city councilor I believe that the very definition of “commonwealth” is supporting our neighbors and lending a helping hand when we can. So it is in that spirit that I propose a bold solution to this big problem: It’s time to sell the State House to the highest bidder, proclaim Springfield the new capital of Massachusetts, and ship our politicians westward.

Maybe forcing our lawmakers to operate outside the comfort zone of the 617 area code will even spur them to be better legislators.

Ludicrous? Perhaps. Profitable? Absolutely. Beacon Hill real estate commands top dollar, and the State House sits atop the choicest plot of land in the neighborhood, with magnificent views of Boston Common, just steps away from everything one needs to live the good life. Its architect, Charles Bulfinch, was no slouch. Doing some back-of-the-envelope math, I estimate that some lucky real estate agent could list the State House at slightly more than $1 billion and then watch an auction unfurl among developers keen on replacing the staid house of government with luxury condominiums. The currently tax-exempt plot of land would provide a steady stream of revenue for years to come.

Meanwhile, 90 miles west on the Mass. Pike, land is plentiful and cheap—the per-square-foot price of real estate in Springfield is somewhere around $112, compared with $1,114 on Beacon Hill. With proper staging and a well-timed open house, we could turn a fortune in profit on the sale alone. That surely must appeal to the inner bean counter of Governor Charlie Baker, whose fiscal-conservative street cred recently took a hit after S & P Global Ratings downgraded the state’s bond rating because he doesn’t have enough cash socked away in a rainy-day fund.

But this isn’t just about flipping the State House for a lump-sum payout. This is about saving a dying city. And like Lazarus rising from the grave, Springfield will teem with new life as power-lunching politicians, hard-drinking staffers, and deep-pocketed lobbyists flood the city’s restaurants, bars, and hotels. The real estate market will surge, and, as the United States’ newest capital, Springfield will enjoy more free media buzz than any tourism board could dream of.

Who knows, maybe forcing our lawmakers to operate outside the comfort zone of the 617 area code will even spur them to be better legislators and recalibrate their priorities—particularly with regard to public transportation. As of now, only one train a day carries passengers from Springfield to Boston. A few long car rides might be all it takes to compel politicians to finally make those big infrastructure investments that are particularly needed west of Boston. A high-speed train could not only ferry government officials from their Boston homes to the new capital, it could potentially open up the state and allow lower- and middle-income workers to live affordably in Springfield while easily commuting to jobs in the Hub.

Of course, selling an asset as spectacular as the State House might strike some as blasphemous, but there is good precedent for this. Boston’s Old City Hall, for instance, is now office space and a Ruth’s Chris Steak House. In addition, 25 states have switched their capital cities with no ill effects. Georgia and Louisiana have each had five. And unlike Massachusetts, many states do not have their capital in their largest municipality—consider Albany, New York; Harrisburg, Pennsylvania; Sacramento, California; and, yes, Springfield, Illinois.

Moving is hard, and I don’t mean to be pushy. All I’m asking is that we think creatively. And when the time comes to pack up and ship out, don’t skimp on the movers, because it can be a bumpy ride out west.