A much smaller crowd of counter-protesters turned out this time than an August rally drew. 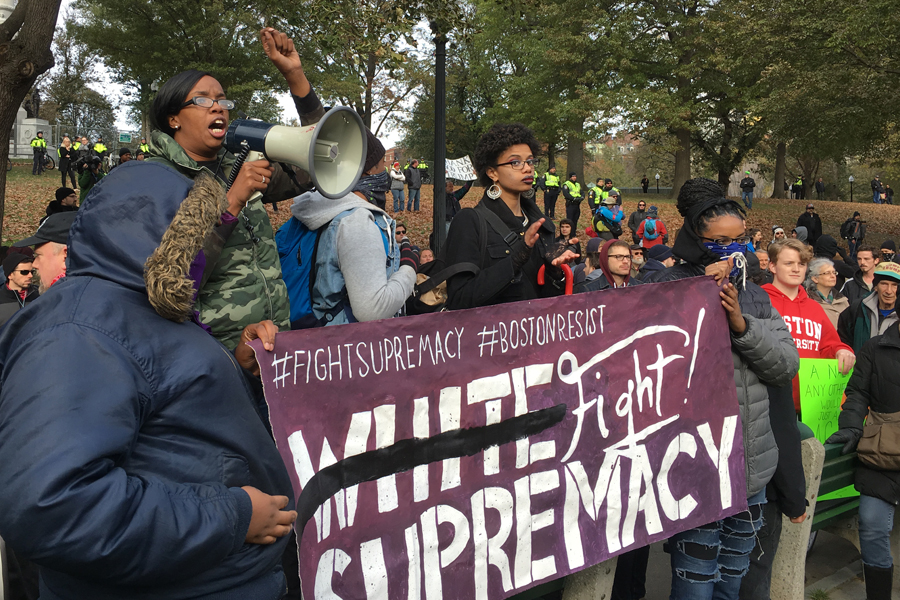 The setting was similar: a wide circle of barricades surrounding the Parkman Bandstand, with a heavy Boston Police presence manning checkpoints and patrolling the park and nearby streets on bikes. But this latest iteration of a “free speech” rally on Boston Common had a markedly different vibe than one held at this very same spot a mere three months ago.

This time dubbed a “Rally for the Republic,” the demonstration organized by groups called Boston Free Speech and Resist Marxism attracted fewer than a hundred to the bandstand.

Around a thousand counter-protesters showed up, but their numbers paled in comparison to the tens of thousands who marched through the streets of Boston in August amid national outrage over the violent “Unite the Right” rally in Charlottesville, in which a young woman named Heather Heyer was killed.

On Saturday, there was some yelling, some chanting, and some arguments between members of the opposing demonstrations, but they weren’t nearly as heated as were the clashes the last time around. Police reported only three arrests.

Organizers were not issued a permit for the event, as the city noted that a 5K race was scheduled in the Common on the same day. But they vowed to show up anyway. When they did, they were given protection from a large contingent of police, and were allowed to plug in a set of booming speakers to broadcast their speeches into the park.

Speakers on the bandstand, which was made accessible to reporters this time (journalists were barred from entering in August), gave fiery speeches about the ways they feel conservative views have been censored in American life. They sought to distance themselves from avowed neo-Nazi or explicitly white supremacist groups, like the ones who showed up in Charlottesville, after their detractors criticized organizers for giving racist groups a platform under the guise of promoting the First Amendment.

Online radio show host Steve Baldassari, for example, called the Ku Klux Klan “terrorists.” At the same time, he had some incendiary thoughts about race he wanted to share. “Organizations like Black Lives Matter are teaching black youth that it’s OK to hate white people,” he said. “It’s gotten so bad that in some inner cities, black people are even just running around beating random white people, even women, while crowds of other black people laugh and film them.

“This white guilt nonsense has to end,” he continued. “Why in the world would I feel guilty about something I never did? I never enslaved anybody.”

Also a featured speaker at the event was Kyle Chapman, the far-right activist who gained notoriety for fighting with counter-protesters, particularly for a picture of him hitting a member of the anti-fascist group Antifa over the head with a stick in California. Decked out in reflective goggles (in case someone tried to pepper spray him), a spikey metal ring, and a shirt reading “it’s ok to be white,” Chapman phrased the movement he’s come to represent in terms of war. “You have to fight,” he shouted into a microphone. “You have to sacrifice. I’m facing 8 years in prison for my actions at the first battle of Berkeley and I have not stopped.

“We will not,” he continued, “keep this freedom, we will not keep this beacon of Western Civilization, if we don’t fight, if we don’t bleed and we don’t sacrifice.” 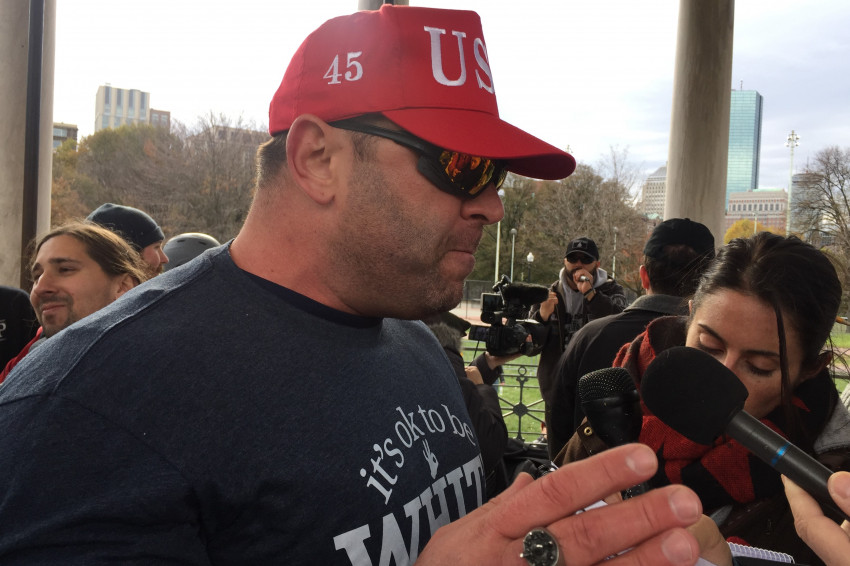 There was no such battle to be fought in Boston.

Police largely kept the protesters and counter-protesters separate, the conflicts between the opposing demonstrations were more subdued, and there was little or no violence to speak of.

The rally attendees around the bandstand, decked out in the intentionally offensive regalia beloved by online forums (like the green, black and white “Kekistan” flag fashioned after the Iron Cross), said they noticed just how different things were.

For example, there was Anthony Moreno, a 19-year-old student at UMass Boston who was swarmed by protesters when he appeared in the Common for the rally in August swathed in a Trump flag and hoisting a can of Pepsi in the air.

“Because of Charlottesville, and because there was a literal death that really riled up the city in a blood frenzy, like a bunch of sharks. They just went ballistic,” he said. This time, Moreno says, he made it to the bandstand without issue, wearing a pair of “Kekistan” flags on his wrists.

Meanwhile, across several hundred feet of lawn and on the other side of metal barricades, counter-protesters led familiar chants, like, “No Trump! No KKK! No fascist USA.” And they waved signs reading “silence is violence” and “This is our fucking city!” A black-clad contingent of Antifa was there with a loudspeaker of their own, as were activists for the nonviolent Veterans for Peace and local socialist groups.

Efforts underway to drown out the speech with “Hey Ya” pic.twitter.com/YRz37orxex 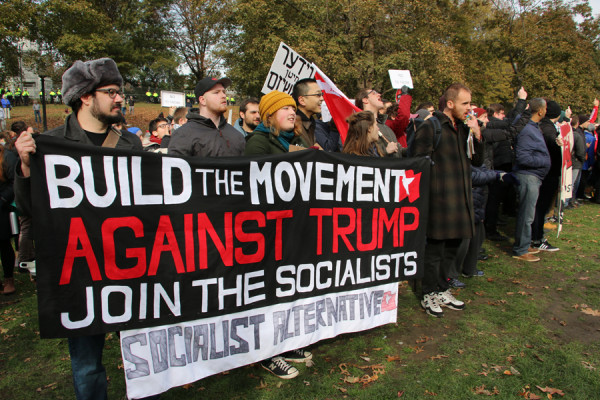 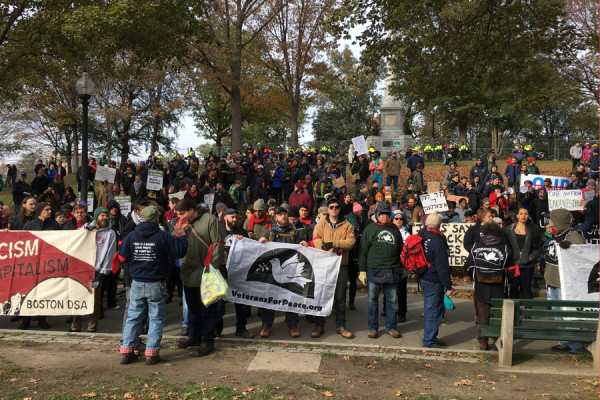 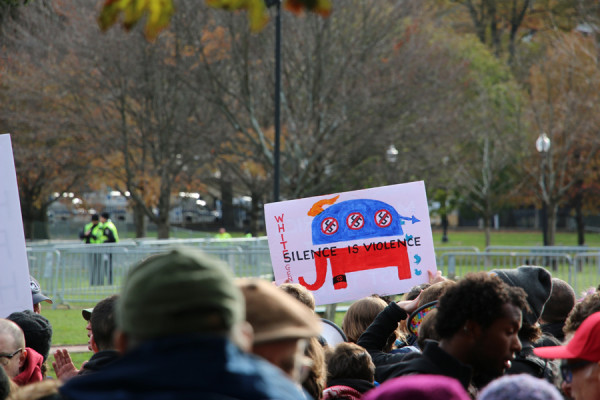 So was Vermin Supreme, the activist, performance artist, and perennial candidate, wearing his trademark boot hat. Supreme said he came to heckle the “free speech” protesters and oppose “fascism,” but also to speak up for the concept of free speech. He described politics not as a “marketplace of ideas,” but a “demolition derby of ideas,” and said that’s what we were witnessing on the Common.

Elsewhere, Senate candidate Shiva Ayyadurai, who said he was there to meet people and wasn’t protesting anything, stood with a large banner with his campaign’s insignia, and argued with several people about his claim to have invented email.

Greetings from the “Rally for the Republic” in Boston, where Senate candidate Shiva Ayyadurai is arguing about email. pic.twitter.com/bLqTj4jKlG

In the end, the protesters left the park, briefly rallied in front of the State House and marched in Beacon Hill, and then everyone went home. They vowed to return sometime in the spring.