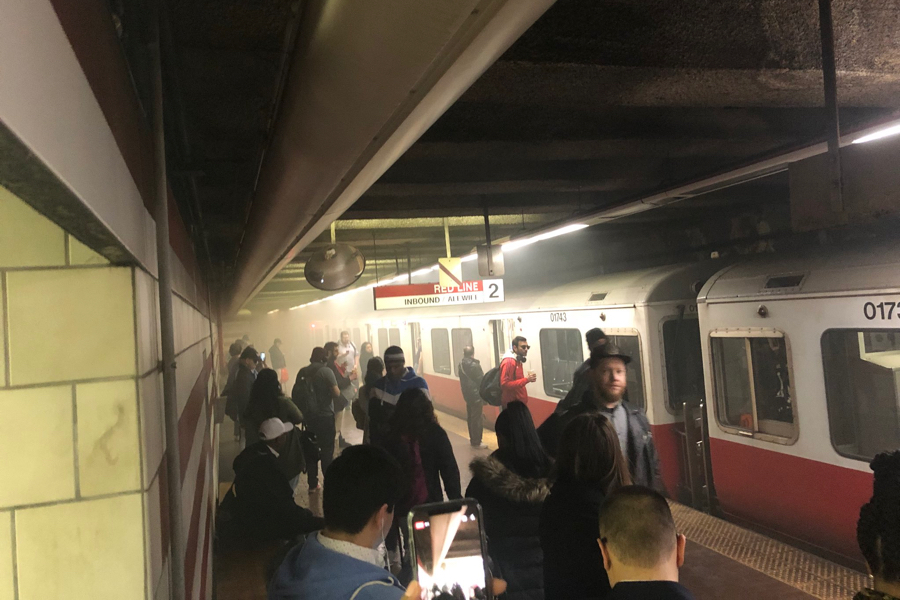 It was a smoky and, for some, scary situation on the MBTA Red Line Wednesday morning after a brief derailment at Andrew Station led to smashed windows, severe delays, and reports of sparks and spooked passengers.

The last of six cars on a Red Line train slipped off its track at about 9:20 a.m., damaging a 300-foot section of the train’s electrified third rail before it “re-railed itself,” the MBTA said in a release Wednesday afternoon. The agency initially reported an issue with the train’s motor, but has since updated its description of the incident after an investigation. No one was injured.

“During the incident, the last car of the train re-railed itself as it entered Andrew Station before stopping. Once stopped at Andrew, customers safely unloaded from the train; the train was immediately taken out of service, and exited the station under its own power,” the T says. “MBTA personnel are investigating all aspects of this occurrence, which includes a thorough inspection of the track, third rail, and the entire train’s equipment and components involved. An initial assessment found that approximately 300 feet of third rail was damaged as a result of this incident. When the train arrived at Andrew Station, the train operator reported an indication of a motor failure in the last car of the six-car train.”

An investigation was underway most of the day into what exactly happened, and the T continued to shuttle Red Line passengers between JFK/UMass and Broadway. Service resumed around 5:30 p.m. The Commuter Rail also accepted Charlie Cards at South Station, JFK/UMass, Quincy Center, and Braintree, and added the following stops, according to Keolis, the company that operates it:

“This is a serious incident and we want our customers to know that our top priority is to operate a safe system for our customers,” T General Manager Luis Manuel Ramírez said in a statement.  “While we realize this is a significant inconvenience to our customers, the Red Line will remain closed between Broadway and JFK until it is safe to resume service.  Until then, our team continues to assess the damage, and make necessary repairs, while working to identify the root cause.”

It was a frightening scene, say commuters, who report the train was “bucking up and down” and that windows “began imploding.”

“I was on the train when we hit what felt like a bump on the track, and then the train began bucking up and down off the track,” says Kyle Hemingway, of Dorchester. “After a minute or so of that, the window across from where I was sitting began imploding at us in pulses. It would shoot pulses of shards of glass into the car. We ran away from the window and ducked for cover. Luckily, this happened right as we were pulling into the station so as soon as we stopped and the door opened I just grabbed all of my stuff and ran out of the station, the car was still smoking and I assumed it was on fire. A few shards of glass fell into my shoe and I had to pick them out, and dust them off my jacket.”

He says he’s still shaken up and called the incident a “dizzying experience,” but wasn’t hurt, and that he didn’t see anyone else get injured, either.

“The window was pulsing and shattering with force into the train,” he says. “There was a cracking/shattering sound as it happened each time. It honestly sounded/felt like someone was shooting through the window.

I was just on a @mbta train that basically exploded. Shards of glass projectile imploding into the car at me. Car bucking off tracks with sparks. What the goddamn fuck #mbta? #safenow #redline #emergency #fuckyoumbta #safety

There were also reports of big crowds at JFK/UMass as commuters waited for shuttle buses to arrive.