A run of the new Silver Line route through Chelsea resulted in an unexpected publicity photo on Twitter. 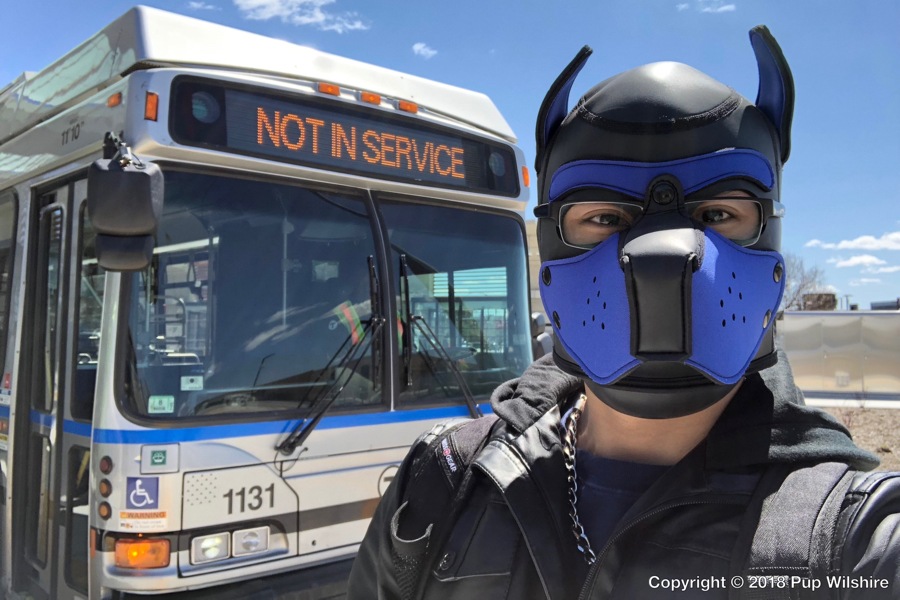 Over the weekend, an MBTA bus set off for its first official trip along the brand new SL3 line, a game-changing route running from South Station through Eastie and into Chelsea. To celebrate the maiden voyage, MBTA General Manager Luis Ramirez hopped on board, along with a half-dozen other passengers and a gaggle of press. And, we now know, a bespectacled man in a pointy eared black and blue dog mask who goes by the name Pup Wilshire.

Much of the world met Pup Wilshire when the MBTA shared a photo on Twitter of Ramirez seated in one of the bus’s seats taking questions from the media. The picture is pretty standard behind-the-scenes fare, snapped by the T’s spokesman, Joe Pesaturo. Except, of course, for the extremely conspicuous visage of Pup Wilshire, who can be seen sitting a few feet away, watching.

The tweet immediately lit up with comments. Some suggested the photo, which featured a “very recognizable sexual fetish mask” should have been cropped. Others said it absolutely should not. “My dude this photo tells a story and i wanna know it,” wrote one commenter. “Batman?” asked another.

Who was this mysterious masked man? His Twitter bio (he replied to the tweet to confirm it was him) and online presence offered some clues. “Gay Bostonian & alpha puppy. IT professional, atheist, & @MBTA transit advocate/geek.” The anonymous user has shared takes on sex positivity (the idea that people shouldn’t be ashamed of their sexual inclinations and should be open about them), and warns new followers that they should be older than 18.

I wanted to hear more from this new figure in the city’s diverse community of T advocates, and find out how the photobomb seen ’round the internet came to be. So I reached out with some questions. He was more than willing to elaborate, but asked that I not use his name and that we communicate via email. Here’s what he said, edited for length and clarity. And if you’re interested in learning more about this particular subset of the fetish community, feel free to Google it. Or, hey, follow Wilshire on Twitter.

I’m Pup Wilshire (pronounced will-Sheer), I’m in my mid-20s, I was born and raised here in Boston, and I work with information technology.

Why were you on the Silver Line this weekend for its maiden voyage?

Several years ago, it came to my attention that the MBTA was building a new route for the Silver Line, a bus-rapid transit network. I had been watching the news and following up on public meetings of the Fiscal Management Control Board (FMCB). To me, seeing any positive changes and new services on the MBTA is exciting, as is looking at how they can benefit the Commonwealth in the long-run.

I want to do something to help improve the T, whether it is participating in public forums for better transit, talking with T officials, calling state representatives, or even working for the T and bringing innovative ideas to the table. Ultimately, my hope is to one day finally connect North Station and South Station together for a unified rail network.

So how did you end up in that photo? Was it an intentional photobombing?

This was not intentional at all, because I did not expect to meet the GM there, let alone end up on the MBTA’s Twitter feed. I wore my hood so I could take selfies for my Twitter page and share them with my fellow pup friends. I also did not expect this to go viral across Twitter. There were only about half a dozen other passengers, as well as the media reporters, the GM, me, and Joe Pesaturo, the T’s press secretary.

I did! It was an honor to finally shake hands with the MBTA General Manager and introduce myself to him. We spoke about various things about the T, including new electric buses that might replace the current Silver Line fleet in the future. I understand the T is a large, complex, and long-time operating mass transit system that is in need of upgrades, repairs, and investment. That being said, it is never an easy task to oversee all of this and I highly respect Mr. Ramirez for taking on the leadership of the MBTA on a journey towards a brighter future.

Also, for the record, I did officially meet the GM. He’s such an awesome gentleman and I truly respect him for taking the lead of the #MBTA pic.twitter.com/pKn89EqSj1

Since the beginning of this year. Part of my New Year’s resolution is to be more open, to express my interests, to inspire people, and really just be myself.

Is there a lot of overlap between the two communities?

Currently I do not see any connection between these topics, but they are two different topics that I have genuine interest and passions in. Pup play, sex positivity and transportation are only some topics I tweet about, but I’ll occasionally tweet about things like LGBTQ rights and emerging technologies.

How often do you wear the mask in public?

It’s a neoprene puppy hood and I’ve had it since January, when I got into pup play. They can be bought from Mr. S-Leather, an iconic retailer in San Francisco that specializes in bondage, kink, and sex gear. I occasionally wear it on the T, especially when I’m heading to special events, like conventions that involve cosplay, or to Boston Pride in June. So far I have had positive feedback from people who have seen me in my hood; some laugh, smile, or compliment me. Of course, I understand pup play is not for everyone and I have received some negative criticism, but the truth is, I don’t care what they say. I love being my pup self, I am not harming anyone, and I enjoy my life, just like other pups around the world.

Have you taken on other public personas in the past or is this a new thing for you?

None. This is a completely new thing for me and I feel like I should be honest with myself and pursue the things I like best.

If you could sum up the mission of Pup Wilshire, what is it?

I want to inspire people to be themselves, to not be afraid, to be happy, to live life to the fullest, and to take mass transit. Additionally, I want to help make Boston more pup-friendly and help the MBTA to one day become the greatest transit network in America.