The company wants to help entrepreneurs around Boston share their best loyal customers and is betting a $30 gift card will do the trick. 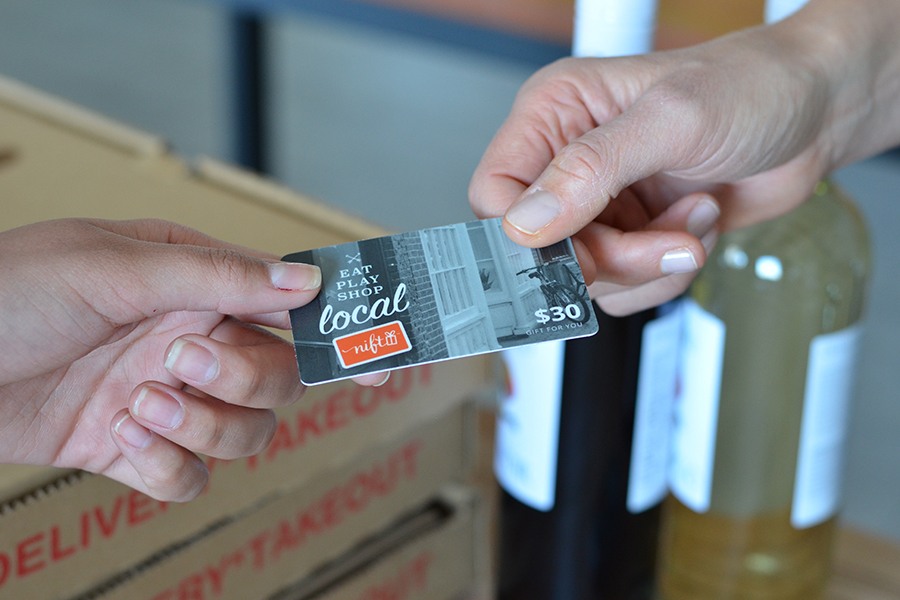 Forty-eight percent of Americans are employed by a small business. There are more than 639,000 small companies in Massachusetts. And one Boston-based startup wants you to learn a lot more about them.

Nift—short for Neighborhood Gift—is hoping to get Bostonians out of chain stores, off the couch, and into the spots unique to our streets. And they’re incentivizing shoppers to do so.

Nift, which launched in June of 2016, gives $30 gift cards to local businesses like yoga studios, florists, and wine shops, which in turn pass the coupons on to customers. Businesses use their discretion to decide who to hand the cards out to—whether that means, for example, putting a pile up for grabs on an in-store table or tying Nift to a preexisting loyalty program. But the gift cards aren’t good at the original business. Instead, through on an online platform tailored to each shoppers’ individual interests, customers are offered the choice between two different curated options elsewhere in the neighborhood where they can spend the money. Businesses join Nift on an invitation-only basis and have to pass a cursory screening to participate. The shops don’t pay anything to join, but they do compensate Nift whenever a customer uses one of the gift cards. The goal is to help shoppers discover new businesses and to create a network of local entrepreneurs sharing loyal customers.

“I basically started discovering all these local businesses that had superior products,” Ellery Pfeffer, the founder and CEO of Nift, says. “The problem they had is that people just didn’t know about them.”

Not only do outposts like those in Nift’s network bring character to a neighborhood, but their success has real ramifications on local economies. According to the Small Business Administration, small businesses account for roughly three-fifths of net new jobs nationwide, so patronizing these stores is one way to help the labor market grow.

Since launching in Boston in 2016, Nift has found a foothold in the community. One in 11 people in the Hub has tried a Nift Card, Pfeffer says, and shoppers have been introduced to more than 2,000 local businesses along the way—and they’re going back. Unlike similar companies that attract bargain hunters for a one-off deal, Nift targets people more likely to exhibit repeat behavior. And according to Pfeffer, 37 percent of customers introduced to a new local florist, wine shop, or other business return within a month. That vote of confidence from users is reflected by investors, too—on March 30, the company announced $16.5 million in new funding from Spark Capital, Foundry Group, and Accomplice.

For some small business owners in Boston, Nift has helped solve the difficult riddle of attracting local customers without spending an arm and a leg. The boutique down the block simply doesn’t have a marketing budget to compete with the Nordstroms and Old Navys of the world, so creativity is a must when finding shoppers. Karuna O’Donnell, a co-owner of 4 Corners Yoga and Wellness in Dorchester, says promotion is the greatest challenge facing her business. And using Nift, O’Donnell says, not only helps her get the word out to customers, but also creates a strong sense of community among entrepreneurs.

“It absolutely creates synergy between business owners,” O’Donnell says. “Rather than fight for those five people and the tension of the push and pull, it’s the opposite of that. There’s enough for everybody, and it boosts goodwill.”

Though Boston is Nift’s home base, the company also operates in Providence and Washington, D.C. Pfeffer says he hopes to expand across the country within the next two years and quadruple the size of the Boston team. Despite the dismal figures predicting a rocky future for brick and mortar retail, Pfeffer says strong small businesses will prevail.

“People are flocking to urban cities because of the local stores, and they’ll keep doing it,” Pfeffer says. “If you give local businesses a fair shot and let people try out their product, I think local businesses are going to win.”