This Freezing Cold Thanksgiving Could Break a Record

Temperatures could be the lowest on the holiday since 1901. 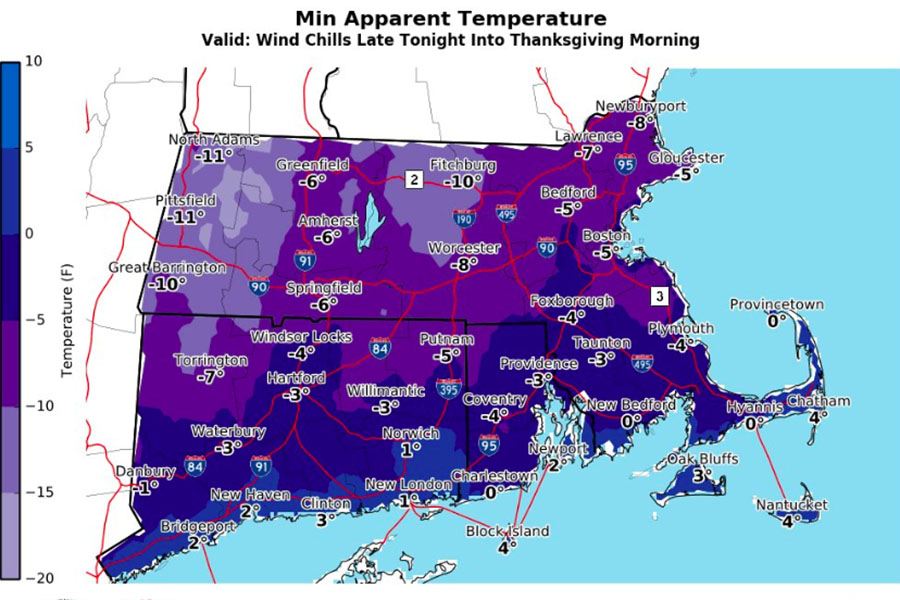 With wind chills hovering around 0 degrees, the chilly temps rolling into the Boston area this week could break a record for Thanksgiving.

An arctic front is making its way toward the state, forecasters say, and it’s expected to bring frigid temps to Boston around 7 p.m., possibly bringing snow squalls to some areas, before some serious cold begins Thursday.

“Temperatures are really gonna plummet,” says Frank Nocera, meteorologist with the National Weather Service in Norton. “Really nasty for anyone who has to be outdoors tomorrow morning, especially for any extended period of time.”

Highs Wednesday will be around 40-45 degrees, forecasters say, and will then drop close to single digits overnight as ultra-cold air from Canada blows in our direction. Add in wind chills, and we could be looking at conditions that feel ten or more below freezing.

[Weather Briefing] An arctic cold front may bring a few very brief localized snow squalls between 3 and 8 pm this evening, resulting in the potential for hazardous travel. Record cold & bitterly cold wind chill of 0 to 15 below zero follow late tonight into Thanksgiving. pic.twitter.com/e1ebTs7cnn

“It’s a very atypical air mass for this time of year,” Nocera says. “This is more typical of the dead of winter—late January, early February.”

Travel conditions looked decent during the day on Wednesday, but drivers may face intermittent snowfall and possibly some icy roadways later on, he says. Strong winds may just impact flights on Thursday, he says, as a combination of snow here and there along with gusts of up to 45 or 50 miles per hour could make for tricky conditions. Travelers in northern New England in particular should keep an eye out for squalls, says NOAA.

On Thursday, the high temperature for the day is forecast to be around 22 degrees, which would be the lowest ever high recorded for the holiday. The record, 24 degrees, was set back in 1880 and repeated in 1901. It looks less likely we’ll beat the all-time lowest low: 11 degrees. Forecasts call for lows of about 15 degrees.