He sure knows how to make an impression. 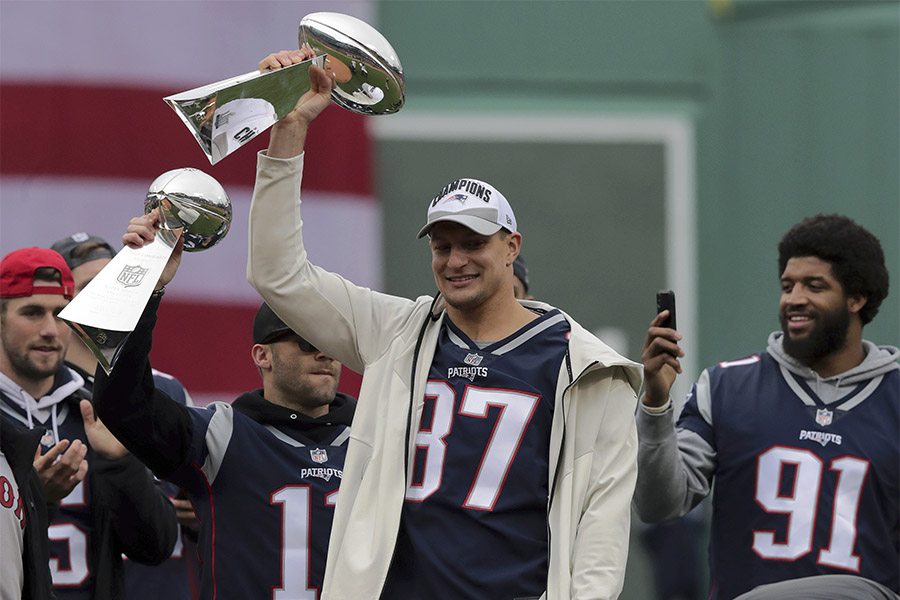 Gronk may have announced his retirement last month, but that’s not stopping him from continuing to make an impression—literally—on the Patriots’ legacy.

The Super Bowl champions were warming up for their first-pitch appearance at the Red Sox home opener last Tuesday, but they didn’t have any bats. But what they did have was their sixth Lombardi trophy.

.@RobGronkowski left a mark on this organization.

And on the sixth Lombardi. pic.twitter.com/t5IVTyCXcA

A video posted by the Patriots’ Twitter shows Gronk using the silver trophy to bunt a baseball, pitched to him by Julian Edelman. Much to his teammates’ surprise, Gronk nails it, and there’s a hefty dent in the trophy to prove it.

“We’re thinking, he’s not gonna swing the bat, he’s not gonna do it,” says Pats safety Duron Harmon in the video. “And literally, at the last second, when 11 [Edelman] throws the ball, we see 87 go from a batting position to a bunt.”

The dent itself is still pretty aesthetic: baseball-sized, almost perfectly circular and placed tastefully at the front tip of the football.

Patriots release video showing Gronk using the Lombardi trophy as a bat at Fenway Park and leaving it with a dent! pic.twitter.com/AXpsnpLfGo

Gronk and Edelman were among 20 Pats players who crashed Fenway on its opening day to be honored on the field for their Super Bowl win. The pair joined Stephon Gilmore to throw out the first pitch of the season. Luckily, fans in the stands couldn’t tell that the trophy had taken a hit (until now).

“If anybody could do it and get away with it, it’d be Mr. Gronkowski,” says Harmon. “He has now left an everlasting mark so that people will never forget that he was a part of that championship team.”

The first part of the video shows Gronk ripping a pitch so hard it breaks through the vinyl tent, leaving a little tear in its wake. Maybe the Pats should just be grateful the ball didn’t do the same to the Lombardi trophy. The dent’s big, but it could have gone all the way through.